Download this LitChart! (PDF)
Teachers and parents! Struggling with distance learning? Our Teacher Edition on The American Scholar can help.

Emerson begins his speech by saying that while his audience’s gathering is a “friendly sign of the survival of the love of letters,” it is time for America’s “sluggard intellect” to assert itself and produce works that scholars all over the world can appreciate. The American Scholar, according to Emerson, will produce poetry and other works that will lead in an artistic revolution and a new age for American society. That same society, however, has become so divided and subdivided that the artistic revolution Emerson hopes for will have to be a uniting one, designed to remind individual men and women that they are fundamentally united by certain ideas. The scholar’s role, then, is to reveal these unifying truths.

There are three main influences over a scholar’s development and the first “in time and […] in importance” is that of nature. The scholar, as a young boy or girl, begins studying nature because they are surrounded by it, and their initial instinct is to classify what they see. According to Emerson, this classification will eventually lead to finding connections between objects by a “unifying instinct” inherent in the scholar. Ultimately, the scholar will find that all they see, including themselves, “proceed from one root.” In studying nature, the young scholar will find that they begin to know and understand themselves and, by extension, mankind in general.

The second influence over a scholar is “the mind of the Past” in the form of books. Emerson states that books were written because past scholars wanted to share their interpretation of the world and the society they moved in. However, because society is always changing, new books need to be written for every generation, and that is the job of the scholar. It is also the scholar’s job to learn how to think for themselves and create new books instead of simply writing on the great books they studied in college libraries. If they allow themselves to be over-influenced by books, then the scholar risks becoming a “satellite” instead of a “system,” and so they can never achieve true greatness. On the other hand, when read correctly, books can help unite readers by revealing to them some of the truths that bind all mankind together.

The third influence is action. Emerson criticizes the popular idea that scholars can’t actually do anything “practical” because they’re too busy thinking and writing. Instead, Emerson asserts that “living” and taking an active role in society’s work actually helps scholars produce better academic work. He believed that action could lead to thought, much like the “ebb and flow of the sea.” Not only do the experiences of working and action lead to new thoughts, but it also introduces the scholar to new vocabularies. Getting to understand the language of “the field and the work-yard” as well as that of the upper classes adds color to the scholar’s language and helps them convey their ideas in a language that all can relate to and understand.

As an important piece of a larger whole, the scholar has a certain set of duties in society. In order to live up to Emerson’s intellectual ideal of Man Thinking, the scholar must pursue both the unity of their society and the cultivation of their individuality. Unfortunately, Emerson acknowledges that these duties frequently come at the expense of being perceived as fashionable and they must “relinquish display and immediate fame.” Ironically, the scholar often finds themselves somewhat alienated from the same society they are observing and trying to benefit. However, the scholar is content with the knowledge that they are “exercising the highest functions of human nature.” Emerson warns his audience that, as scholars, they need to avoid getting caught up in the fashion and controversies of the moment to find the underlying truths common to all human beings if they want to achieve their full potential.

The American Scholar has the opportunity to not just understand, but define the world they live in. As Emerson states, “Not he is great who can alter matter, but he who can alter my state of mind.” The impending revolution that Emerson predicted in the beginning of the speech will be “wrought by the gradual domestication of the idea of Culture,” which the scholar is uniquely qualified to do by writing new books. Emerson finds hope for a positive revolution in the sudden popularity of books that focus on neglected classes: “literature of the poor, the feelings of the child, the philosophy of the street, the meaning of household life.” These, Emerson believe, give unique insight into the true state of society, including that of the past and the future due to the universality of some of the truths these books portray.

Finally, Emerson sees the “new importance given to the single person” as another sign of the readiness of American society for artistic revolution. Scholars take upon themselves the duty of uniting their society. In the case of the American Scholar, they will help unite the country by creating work that is distinctly American and that reflects the reality and truth of being part of the United States in the 19th century, rather than continuing to rely on European traditions that had no relevance in a country as young as the U.S. Not only would that scholar earn the nation’s respect, but they would pave the way for future American scholars that had long been discouraged by the negative attitudes towards “speculative” individuals. Ultimately, Emerson predicts that the works produced by American scholars will result in a truly united nation by showing each individual that they are connected by a “Divine Soul which also inspires all men.” 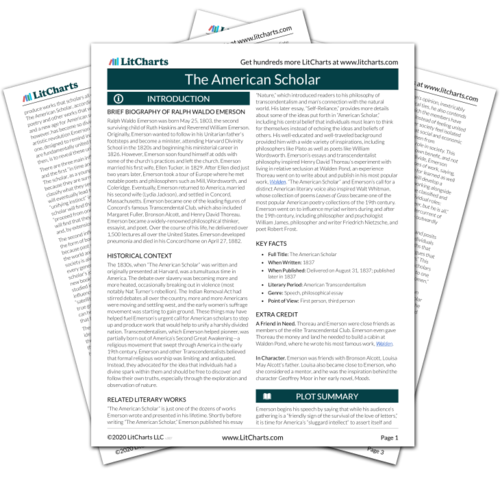 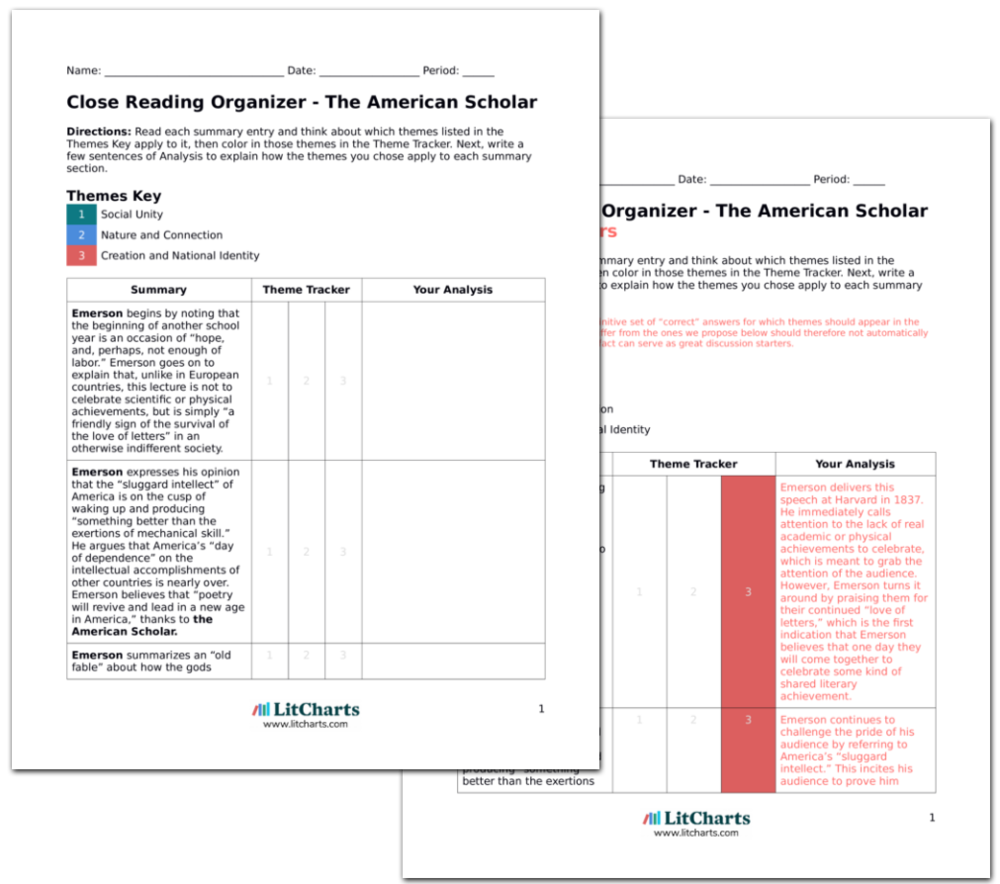