Download this LitChart! (PDF)
Teachers and parents! Struggling with distance learning? Our Teacher Edition on The Analects can help.

Welcome to the LitCharts study guide on Confucius's The Analects. Created by the original team behind SparkNotes, LitCharts are the world's best literature guides.

A concise biography of Confucius plus historical and literary context for The Analects.

A quick-reference summary: The Analects on a single page.

In-depth summary and analysis of every book of The Analects. Visual theme-tracking, too.

Explanations, analysis, and visualizations of The Analects's themes.

The Analects's important quotes, sortable by theme, character, or book.

Description, analysis, and timelines for The Analects's characters.

Explanations of The Analects's symbols, and tracking of where they appear.

An interactive data visualization of The Analects's plot and themes.

While the Analects of Confucius were likely written by Confucius’s disciples years after his death, they center on the teachings of the Chinese philosopher and sage, Confucius. Confucius’s father is thought to have been an army commander who died when Confucius was three years old. He was then raised by his mother, and at 19, he married and had three children. As a child, Confucius belonged to a social class between the aristocrats and the commoners, and he went to a school for commoners where he learned the six arts: the rites (common cultural practices), music, archery, charioteering, calligraphy, and mathematics. Of these, he went on to champion the rites and music in his philosophical teachings. As a young man, Confucius is said to have worked in various government posts, while informally giving philosophical and ethical teachings. Around 500 B.C.E., he had acquired significant recognition for these teachings and was appointed governor of a small town in his province. He later was promoted to Minister of Crime in that same province. However, believing that the family in rule in the state of Lu had unethically taken power from the former duke, Confucius participated in a failed rebellion against the family. Shortly after, continuing to disagree politically with Lu’s powerful politicians, Confucius exiled himself in the neighboring state of Qi. He continued with his teachings and returned to his home state at the age of 68, where he dedicated himself to teaching his disciples, who numbered around 70. Confucius died of natural causes in his early 70s.
Get the entire The Analects LitChart as a printable PDF.
"My students can't get enough of your charts and their results have gone through the roof." -Graham S.
Download 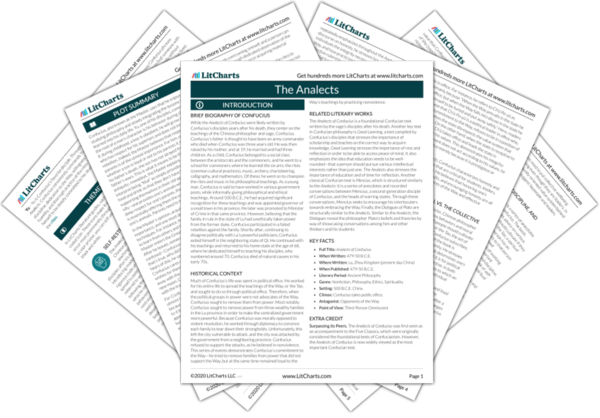 Historical Context of The Analects

Much of Confucius’s life was spent in political office. He worked for his entire life to spread the teachings of the Way, or the Tao, and sought to do so through political office. Therefore, when the political groups in power were not advocates of the Way, Confucius sought to remove them from power. Most notably. Confucius sought to remove power from three wealthy families in the Lu province in order to make the centralized government more powerful. Because Confucius was morally opposed to violent revolution, he worked through diplomacy to convince each family to tear down their strongholds. Unfortunately, this left the city vulnerable to attack, and the city was attacked by the government from a neighboring province. Confucius refused to support the attacks, as he believed in nonviolence. This series of events demonstrates Confucius’s commitment to the Way—he tried to remove families from power that did not support the Way, but at the same time remained loyal to the Way’s teachings by practicing nonviolence.

Other Books Related to The Analects

The Analects of Confucius is a foundational Confucian text written by the sage’s disciples after his death. Another key text in Confucian philosophy is Great Learning, a text complied by Confucius’s disciples that stresses the importance of scholarship and teaches on the correct way to acquire knowledge. Great Learning stresses the importance of rest and reflection in order to be able to access peace of mind. It also emphasizes the idea that education needs to be well-rounded—that a person should pursue various intellectual interests rather than just one. The Analects also stresses the importance of education and of time for reflection. Another classical Confucian text is Mencius, which is structured similarly to the Analects: it is a series of anecdotes and recorded conversations between Mencius, a second-generation disciple of Confucius, and the heads of warring states. Through these conversations, Mencius seeks to encourage his interlocuters towards embracing the Way. Finally, the Dialogues of Plato are structurally similar to the Analects. Similar to the Analects, the Dialogues reveal the philosopher Plato’s beliefs and theories by way of showcasing conversations among him and other thinkers and his students.
Key Facts about The Analects

Extra Credit for The Analects 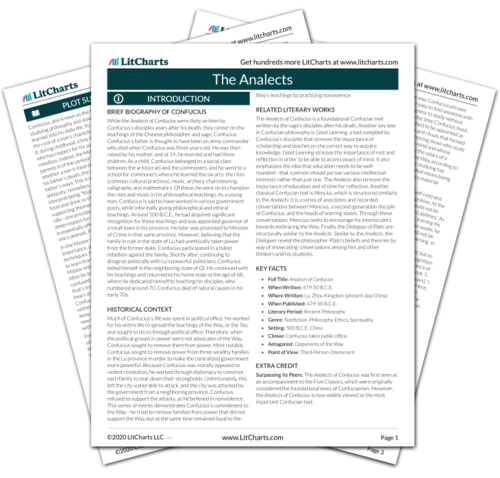 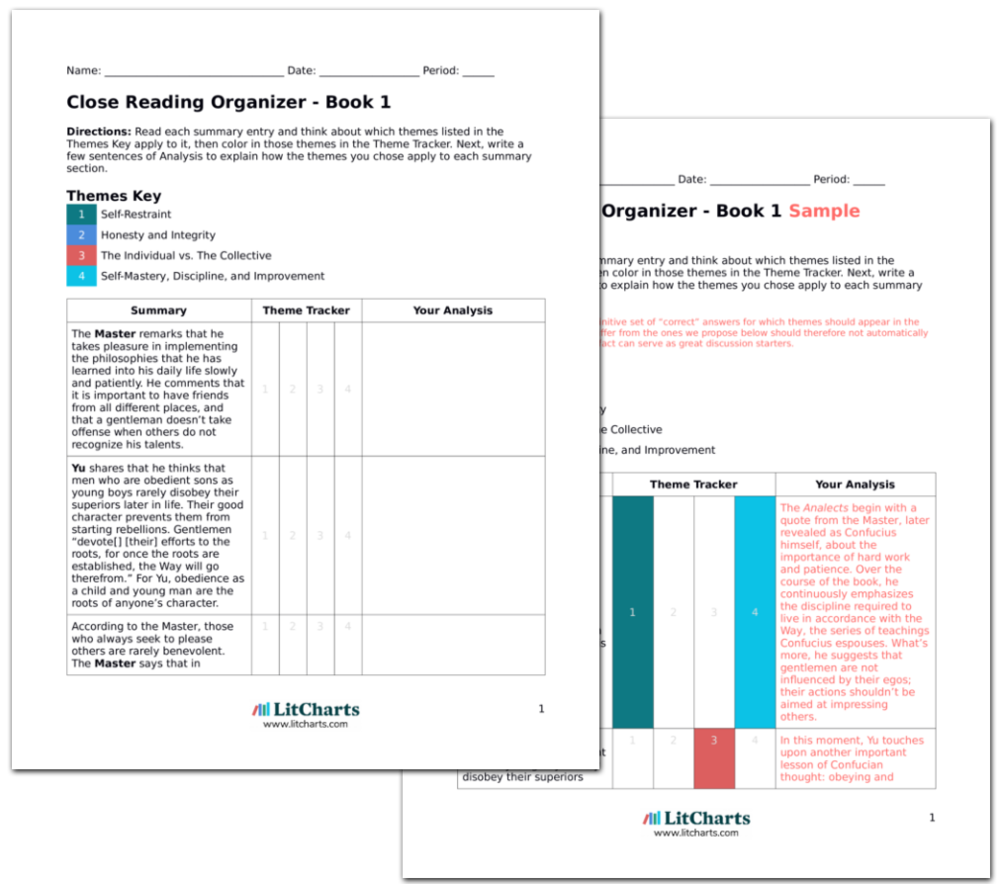