Download this LitChart! (PDF)
Teachers and parents! Struggling with distance learning? Our Teacher Edition on The Beak of the Finch can help.

Author Jonathan Weiner’s The Beak of the Finch explores the work of Princeton scientists Peter and Rosemary Grant, a married couple originally from England who have devoted their lives to studying Darwin’s finches. The finches—originally discovered by their namesake, Charles Darwin, the English naturalist who pioneered groundbreaking theories about natural selection and evolution—live on the island archipelago of the Galápagos, off the coast of Ecuador in the Pacific Ocean. As Weiner spends time with the Grants in their lab at Princeton and in the field on the Galápagos islands of Daphne Major and Genovesa, he provides a history of evolutionary theory as well insight into what modern Darwinists—many of them former or current students of the Grants—are discovering about how our world is changing.

In the first part of the book, Weiner explores how naturalists and scientists have learned from the finches of the Galápagos by closely observing how the isolated birds have grown and evolved over the years. Intense weather events, changes in food sources, and complex mating process are all different forms of selective pressures that have the power to change how a species looks. For instance, in a period of drought on Daphne Major in the late 1970s, bigger birds with bigger beaks that could wrestle open the tough, dry seed pods that were the only source of food on the island did best and survived—so they passed on their bigger beaks to their offspring, and there were many more big-beaked finches on the island. But a few years later, when a particularly powerful El Niño brought a torrential flood to the island, the big-beaked birds struggled to adapt to their new primary food source: tiny seeds that fell to the ground from the many new plants that were thriving in the wet environment. Soon, the big-beaked birds began to die off, and birds with smaller beaks began to thrive. This process shows that evolution is constantly taking place—and that it can be observed, in species like the finches, from month to month and year to year.

In the second part of the book, Weiner delves into the specifics of how variations within species come to be. There are “invisible coasts,” he argues, between different species—and one species of finch can recognize that another species is not its own. These different species won’t mate with one another ordinarily—but again, drastic shifts in population, often driven by weather events or other climate-changing phenomena, can mean that species will interbreed or “hybridize.” Species can, in this way, fuse together—but then, as that new hybridized species begins to specialize, it drifts apart from the others once again. This constant war between fission and fusion often results in new species with new specific skills or evolutionary “niches.”

In the third part of the book, Weiner examines how modern-day science—and humanity’s changing relationship to nature—can influence natural selection and evolution. By offering intimate looks into the research projects of some of the Grants’ associates and former students, Weiner shows that animals of all kinds can be manipulated and changed in laboratory settings—and perhaps even in the wild, too—through human intervention. This is a massive and dangerous responsibility, Weiner suggests. He offers examples of how certain moths have evolved to camouflage themselves within grimy urban environments to illustrate that humanity needs to understand the delicate balance of the natural world (and do its best to preserve that balance).

Weiner also examines the “resistance movement” taking place within nature as humanity expands its reach. He touches on how antibiotic-resistant bacteria represent evolution in action—as do elephants who have stopped developing tusks in order to avoid ivory poachers, as well as insects who have evolved immunity to pesticides in order to survive humanity’s attempts to eradicate them. Weiner concludes his book by examining human evolution and suggesting that humanity might also be in the process of evolving further—and that our animal counterparts, such as chimpanzees and even birds, are evolving new social learning mechanisms that allow them to share information with one another. The ability to share, retain, and pass down knowledge and experience, Weiner suggests, is the most helpful key to a species’ ongoing evolution. 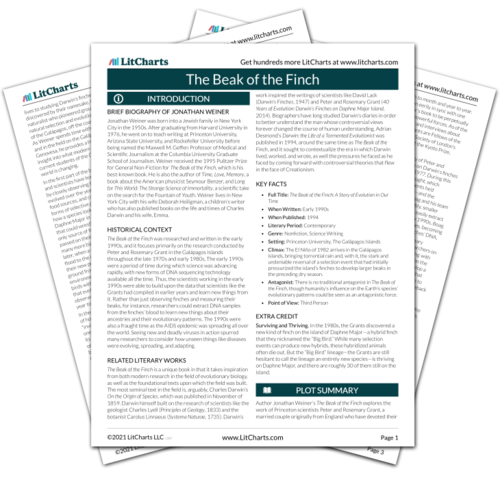 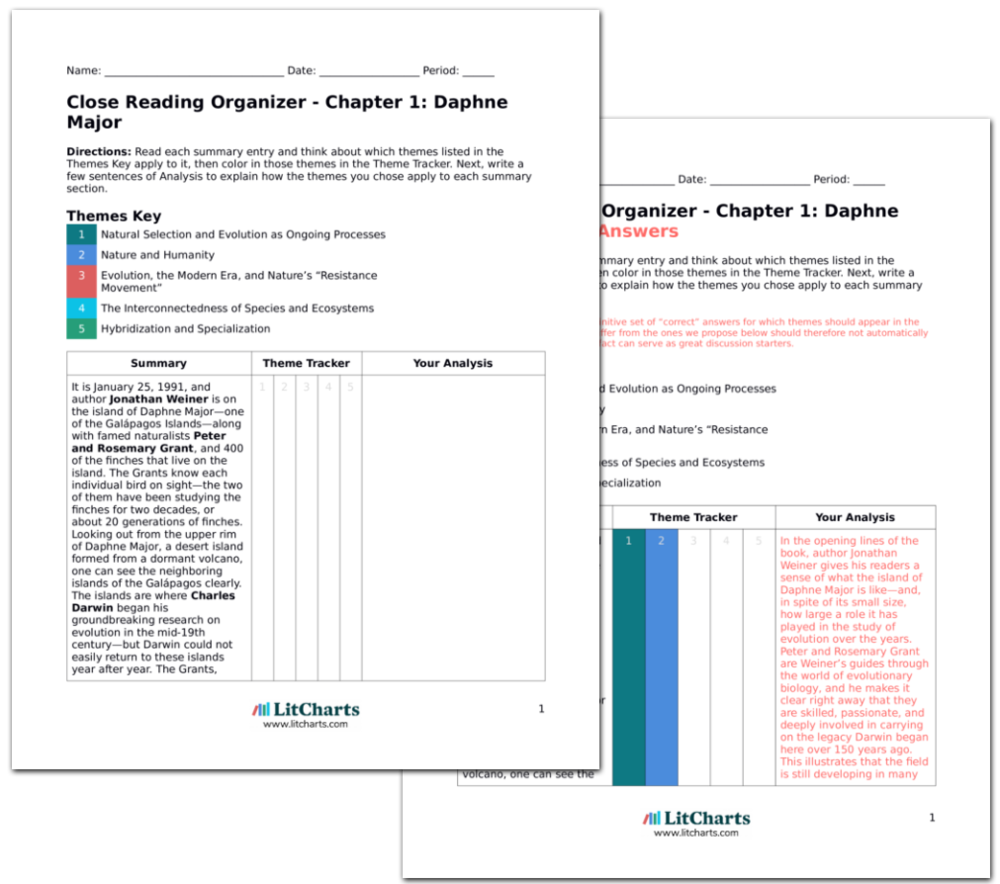