Download this LitChart! (PDF)
Teachers and parents! Struggling with distance learning? Our Teacher Edition on The Furnished Room can help.

Welcome to the LitCharts study guide on O. Henry's The Furnished Room. Created by the original team behind SparkNotes, LitCharts are the world's best literature guides.

A concise biography of O. Henry plus historical and literary context for The Furnished Room.

A quick-reference summary: The Furnished Room on a single page.

In-depth summary and analysis of every of The Furnished Room. Visual theme-tracking, too.

Explanations, analysis, and visualizations of The Furnished Room's themes.

The Furnished Room's important quotes, sortable by theme, character, or .

Description, analysis, and timelines for The Furnished Room's characters.

Explanations of The Furnished Room's symbols, and tracking of where they appear.

An interactive data visualization of The Furnished Room's plot and themes.

O. Henry, William Sydney Porter, was a prolific American author in the late nineteenth and early twentieth centuries. As a young man, he worked as a clerk in his uncle’s drugstore before moving to Texas for his health. He tried several different jobs, including book-keeper, bank-teller, and publisher/illustrator of a weekly periodical. In 1895, he found steady employment writing for Houston’s Daily Post, but only a year later he was arrested for embezzlement. He fled to Honduras, and he later drew on his experiences there to write a book of short stories, Cabbages and Kings. In 1897, he returned to Texas and served four years in prison, during which time he wrote several short stories and adopted the pen name O. Henry. After his release in 1902, O. Henry moved to New York City, where he published hundreds of short stories. He was widely-read in his time, and many of his stories, such as “The Gift of the Magi,” remain popular to this day.
Get the entire The Furnished Room LitChart as a printable PDF.
"My students can't get enough of your charts and their results have gone through the roof." -Graham S.
Download 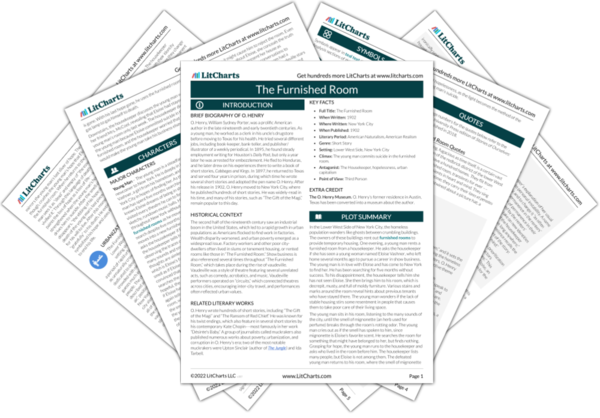 Historical Context of The Furnished Room

The second half of the nineteenth century saw an industrial boom in the United States, which led to a rapid growth in urban populations as Americans flocked to find work in factories. Wealth disparity worsened, and urban poverty emerged as a widespread issue. Factory workers and other poor city-dwellers often lived in slums or tenement housing, or rented rooms like those in “The Furnished Room.” Show business is also referenced several times throughout “The Furnished Room,” which takes place during the rise of vaudeville. Vaudeville was a style of theatre featuring several unrelated acts, such as comedy, acrobatics, and music. Vaudeville performers operated on “circuits,” which connected theatres across cities, encouraging inter-city travel, and performances often reflected urban values.

Other Books Related to The Furnished Room

O. Henry wrote hundreds of short stories, including “The Gift of the Magi” and “The Ransom of Red Chief.” He was known for his twist endings, which also feature in several short stories by his contemporary Kate Chopin––most famously in her work “Désirée's Baby.” A group of journalists called muckrakers also published numerous works about poverty, urbanization, and corruption in O. Henry’s era; two of the most notable muckrakers were Upton Sinclair (author of The Jungle) and Ida Tarbell.
Key Facts about The Furnished Room

Extra Credit for The Furnished Room

The O. Henry Museum. O. Henry’s former residence in Austin, Texas has been converted into a museum about the author. 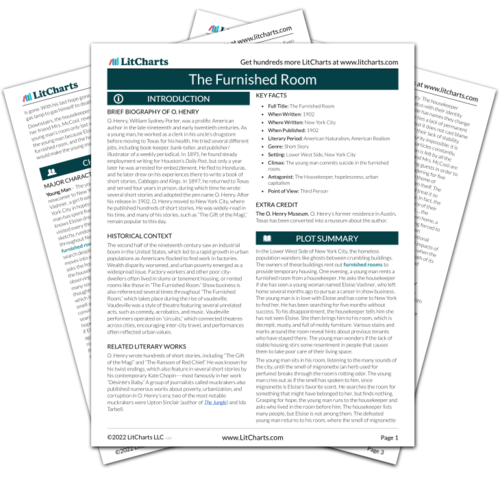 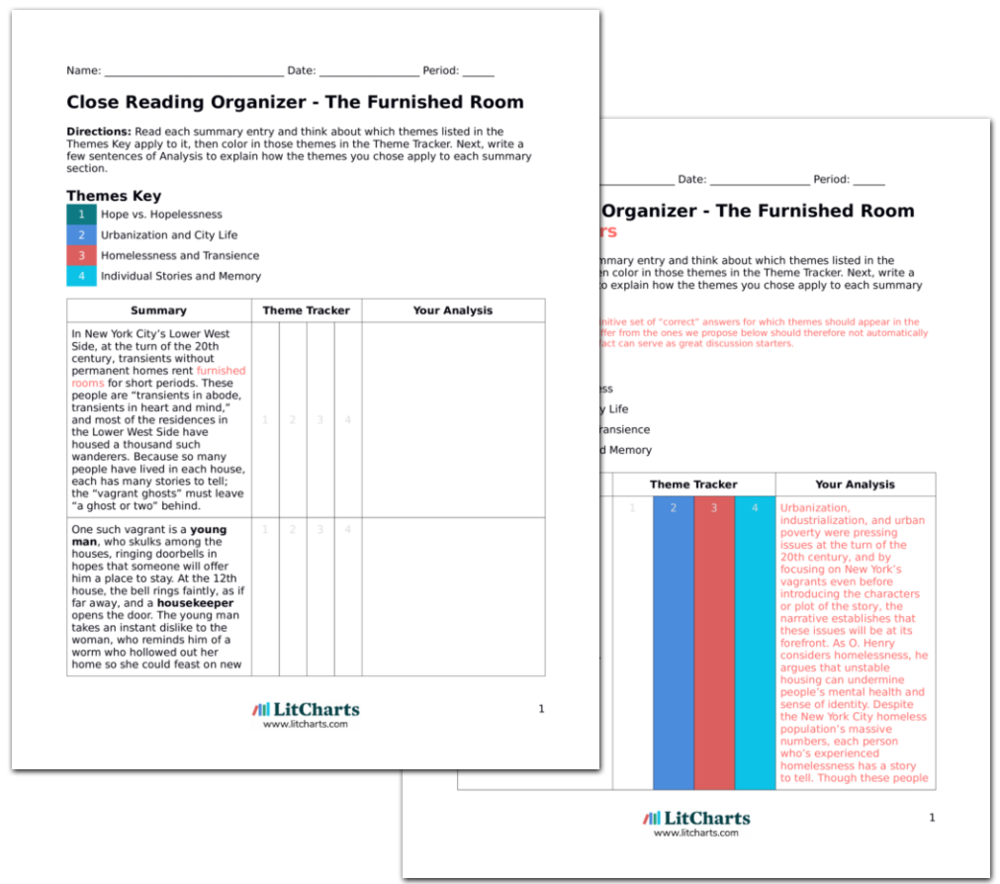