Welcome to the LitCharts study guide on John Steinbeck's The Grapes of Wrath. Created by the original team behind SparkNotes, LitCharts are the world's best literature guides.

The Grapes of Wrath: Introduction

A concise biography of John Steinbeck plus historical and literary context for The Grapes of Wrath.

The Grapes of Wrath: Plot Summary

A quick-reference summary: The Grapes of Wrath on a single page.

In-depth summary and analysis of every chapter of The Grapes of Wrath. Visual theme-tracking, too.

The Grapes of Wrath: Themes

Explanations, analysis, and visualizations of The Grapes of Wrath's themes.

The Grapes of Wrath: Quotes

The Grapes of Wrath's important quotes, sortable by theme, character, or chapter.

The Grapes of Wrath: Characters

Description, analysis, and timelines for The Grapes of Wrath's characters.

The Grapes of Wrath: Symbols

Explanations of The Grapes of Wrath's symbols, and tracking of where they appear.

The Grapes of Wrath: Theme Wheel

An interactive data visualization of The Grapes of Wrath's plot and themes.

Steinbeck grew up in a rural town, and spent his youth working on ranches alongside migrant laborers. In 1920, he began attending Stanford University, but never graduated, choosing instead to move to New York and try his hand at a career in writing. He had trouble getting his work published, however, and returned to California to work a series of manual jobs, writing all the while. In 1935, Steinbeck first found literary success with Tortilla Flat, which follows the exploits of a group of Mexican-Americans in Monterey, California. In the following years, Steinbeck wrote several novels that focused on farming life and its discontents. The most famous of these is 1937’s Of Mice and Men. In 1939, Steinbeck published the Grapes of Wrath, which garnered him significant critical acclaim, including a Pulitzer Prize and a National Book Award. Following his success with The Grapes of Wrath, Steinbeck went on to publish other notable works, including the 1952 novel, East of Eden. Steinbeck died in New York City in 1968, at age 66.
Get the entire The Grapes of Wrath LitChart as a printable PDF.
"My students can't get enough of your charts and their results have gone through the roof." -Graham S.
Download 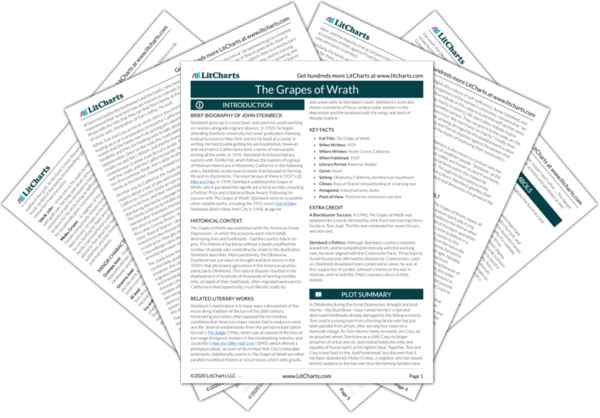 Historical Context of The Grapes of Wrath

The Grapes of Wrath was published while the American Great Depression—in which the economy went into freefall, destroying lives and livelihoods—had the country fully in its grip. This historical backdrop without a doubt amplified the number of people who could directly relate to the destitution Steinbeck describes. More pertinently, the Oklahoma Dustbowl was a product of drought and dust storms in the 1930’s that decimated agriculture in the American prairies, particularly Oklahoma. This natural disaster resulted in the displacement of hundreds of thousands of farming families, who, stripped of their livelihoods, often migrated westward to California to find opportunity, much like the Joads do.

Other Books Related to The Grapes of Wrath

Steinbeck’s masterpiece is in many ways a descendant of the muckraking tradition of the turn of the 20th century. Muckraking journalists often exposed the horrendous conditions that America’s lower classes had to endure in work and life. Several notable books from this period include Upton Sinclair’s The Jungle (1906), which was an exposé of the lives of low-wage immigrant workers in the meatpacking industry; and Jacob Riis’s How the Other Half Lives (1890), which offered a photojournalistic account of life in New York City’s miserable tenements. Additionally, events in The Grapes of Wrath are often parallels to biblical themes or occurrences, which adds gravity and universality to Steinbeck’s work. Steinbeck’s work also shares a similarity of focus on blue collar workers in the depression and the dustbowl with the songs and work of Woody Guthrie.
Key Facts about The Grapes of Wrath

Extra Credit for The Grapes of Wrath

A Blockbuster Success: In 1940, The Grapes of Wrath was adapted into a movie, directed by John Ford and starring Henry Fonda as Tom Joad. The film was nominated for seven Oscars, and won two.

Steinbeck’s Politics: Although Steinbeck’s politics certainly leaned left, and he sympathized intensely with the working man, he never aligned with the Communist Party. Three trips to Soviet Russia only affirmed his distaste for Communism. Later on, Steinbeck developed more conservative views; he was at first supportive of Lyndon Johnson’s stance on the war in Vietnam, and he held the 1960’s counterculture in little esteem.