Download this LitChart! (PDF)
Teachers and parents! Struggling with distance learning? Our Teacher Edition on The Marrow Thieves can help.

Welcome to the LitCharts study guide on Cherie Dimaline's The Marrow Thieves. Created by the original team behind SparkNotes, LitCharts are the world's best literature guides.

A concise biography of Cherie Dimaline plus historical and literary context for The Marrow Thieves.

A quick-reference summary: The Marrow Thieves on a single page.

In-depth summary and analysis of every chapter of The Marrow Thieves. Visual theme-tracking, too.

Explanations, analysis, and visualizations of The Marrow Thieves's themes.

Description, analysis, and timelines for The Marrow Thieves's characters.

Description, analysis, and timelines for The Marrow Thieves's terms.

Explanations of The Marrow Thieves's symbols, and tracking of where they appear.

An interactive data visualization of The Marrow Thieves's plot and themes.

Cherie Dimaline is a member of the Georgian Bay Métis community in Ontario, Canada, an ethnic group whose roots trace back to First Nations Indigenous people as well as European settlers. As a child, she spent summers in the Métis community and so learned the traditional Métis stories, which she's said directly influenced The Marrow Thieves in particular. She published her first novel, Red Rooms, in 2011, but The Marrow Thieves has proved her most popular and well-received book—it won the Governor-General's Award for English language children's literature, the Kirkus Prize, and was a finalist in the Canada Reads competition. In addition to writing novels and short stories, Dimaline was also the founding editor of Muskrat Magazine and has been involved in residency programs at the Toronto Public Library. She lives in Toronto with her husband and children.
Get the entire The Marrow Thieves LitChart as a printable PDF.
"My students can't get enough of your charts and their results have gone through the roof." -Graham S.
Download 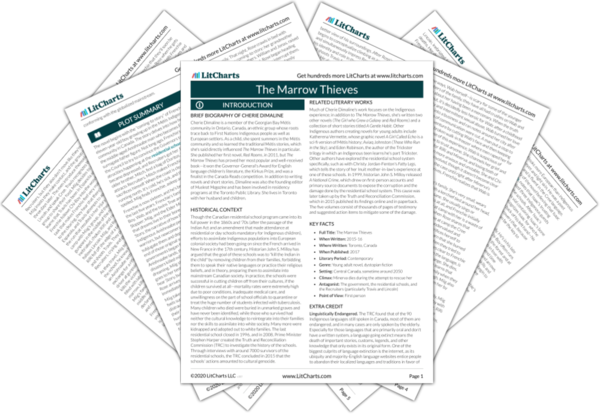 Historical Context of The Marrow Thieves

Though the Canadian residential school program came into its full power in the 1860s and '70s (after the passage of the Indian Act and an amendment that made attendance at residential or day schools mandatory for Indigenous children), efforts to assimilate Indigenous populations into European colonial society had been going on since the French arrived in New France in the 17th century. Historian John S. Milloy has argued that the goal of these schools was to "kill the Indian in the child" by removing children from their families, forbidding them to speak their native languages or practice their religious beliefs, and in theory, preparing them to assimilate into mainstream Canadian society. In practice, the schools were successful in cutting children off from their cultures, if the children survived at all—mortality rates were extremely high due to poor conditions, inadequate medical care, and unwillingness on the part of school officials to quarantine or treat the huge number of students infected with tuberculosis. Many children who died were buried in unmarked graves and have never been identified, while those who survived had neither the cultural knowledge to reintegrate into their families nor the skills to assimilate into white society. Many more were kidnapped and adopted out to white families. The last residential school closed in 1996, and in 2008, Prime Minister Stephen Harper created the Truth and Reconciliation Commission (TRC) to investigate the history of the schools. Through interviews with around 7000 survivors of the residential schools, the TRC concluded in 2015 that the schools' actions amounted to cultural genocide.

Other Books Related to The Marrow Thieves

Much of Cherie Dimaline's work focuses on the Indigenous experience; in addition to The Marrow Thieves, she's written two other novels (The Girl who Grew a Galaxy and Red Rooms) and a collection of short stories titled A Gentle Habit. Other Indigenous authors creating novels for young adults include Katherena Vermette, whose graphic novel A Girl Called Echo is a sci-fi version of Métis history; Aviaq Johnston (Those Who Run in the Sky); and Eden Robinson, the author of the Trickster trilogy in which an Indigenous teen learns he's part Trickster. Other authors have explored the residential school system specifically, such as with Christy Jordan-Fenton's Fatty Legs, which tells the story of her Inuit mother-in-law's experience at one of these schools. In 1999, historian John S. Milloy released A National Crime, which drew on first-person accounts and primary source documents to expose the corruption and the damage done by the residential school system. This cause was later taken up by the Truth and Reconciliation Commission, which in 2015 published its findings online and in paperback. The five volumes consist of thousands of pages of testimony and suggested action items to mitigate some of the damage.
Key Facts about The Marrow Thieves

Extra Credit for The Marrow Thieves

Linguistically Endangered. The TRC found that of the 90 Indigenous languages still spoken in Canada, most of them are endangered, and in many cases are only spoken by the elderly. Especially for those languages that are primarily oral and don't have a written system, a language going extinct means the death of important stories, customs, legends, and other knowledge that only exists in its original form. One of the biggest culprits of language extinction is the internet, as its ubiquity and majority-English language websites entice people to abandon their localized languages and traditions in favor of conforming with the globalized mainstream. 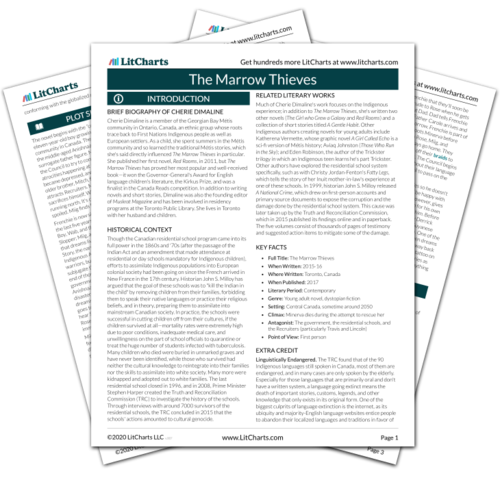 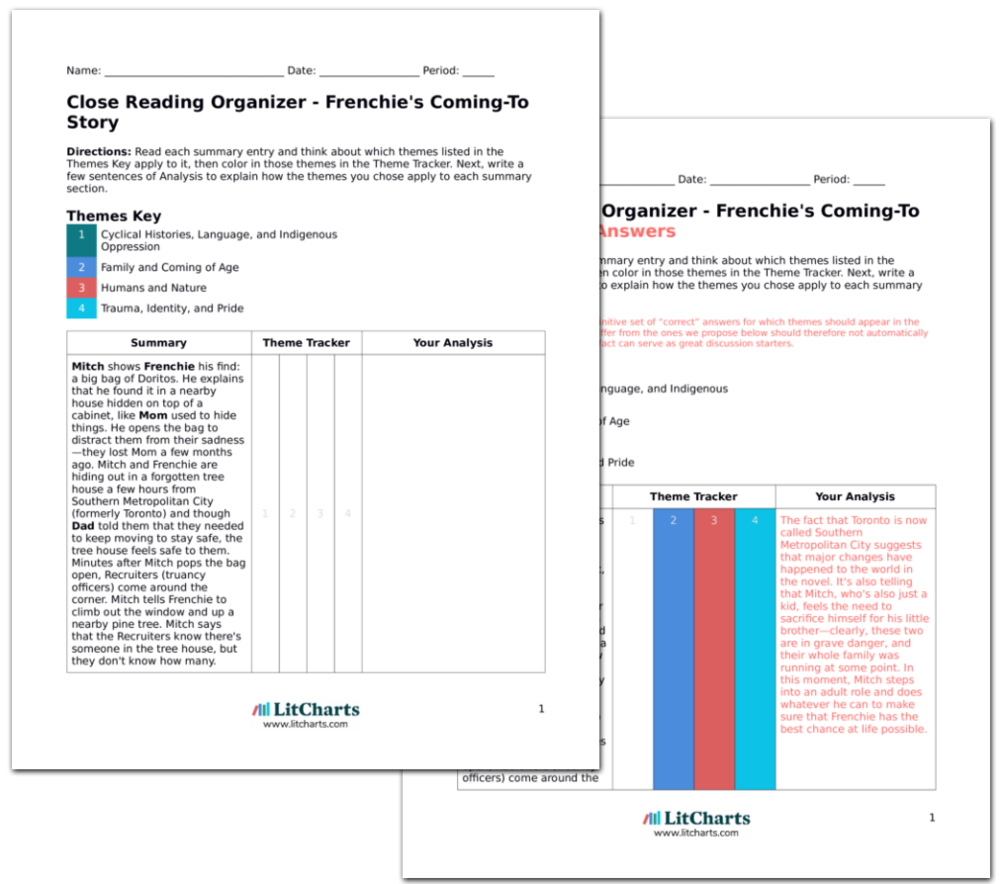