Phyllis, a solitary young woman who lives in the English countryside, and Matthäus Tina, a German Hussar camped near Phyllis’s home, both find themselves in situations of captivity that cause them to resent and resist their circumstances, to unhappy or even disastrous ends. Phyllis lives in the countryside with her father, Dr. Grove, as his tendency towards solitary meditation has reduced their financial means, and living in a town is no longer within their budget. Her life with her father, particularly after she meets Matthäus Tina, has become “irksome and painful in the extreme” and she receives very little affection from him. Phyllis’s reluctant engagement to a young man named Humphrey becomes another restriction, compounded by her father’s insistence that the engagement remain intact, and his efforts to keep her from seeing Matthäus Tina, whom she meets and befriends while Humphrey is away. To separate the lovers, Phyllis’s father plans to send her to stay at her aunt’s home, a place Phyllis feels is “a prison.” Meanwhile, Matthäus Tina, bound by his military status, longs to be back in his homeland and near his mother in the German town of Saarbrück. He hates England, yet leaving without permission would mean becoming a deserter.

Neither character is able to make a decision that results in their freedom. Matthäus Tina attempts to escape England, which ends in execution for himself and his fellow soldier; Phyllis, bound by the restrictions of her father and the expectations of society, decides to honor her engagement to Humphrey—an engagement, it turns out, he has secretly disregarded in order to marry another, exerting the freedom granted by his gender and slightly higher social status. Both Phyllis and Matthäus Tina, forced to remain in situations that cause them great sadness, are eventually buried near each other in the part of the world they have attempted to leave, suggesting that the restrictions of money, family, and wartime are inescapable, and that trying to escape them is futile.

The ThemeTracker below shows where, and to what degree, the theme of Captivity, Restriction, and Escape appears in each part of The Melancholy Hussar of the German Legion. Click or tap on any chapter to read its Summary & Analysis.
How often theme appears:
part length:
Part
Part 1
1
Part 2
2
Part 3
3
Part 4
4
Part 5
5
Get the entire The Melancholy Hussar of the German Legion LitChart as a printable PDF.
"My students can't get enough of your charts and their results have gone through the roof." -Graham S.
Download 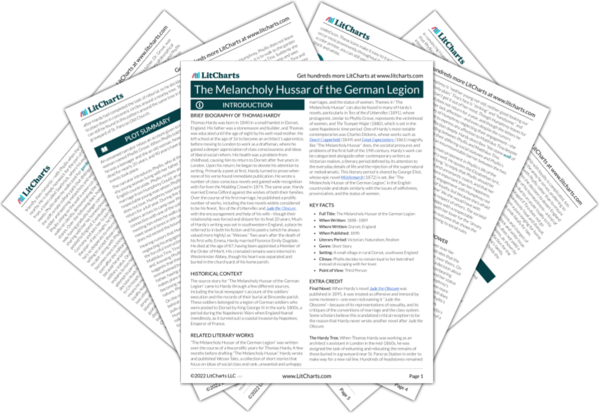 Captivity, Restriction, and Escape Quotes in The Melancholy Hussar of the German Legion

Below you will find the important quotes in The Melancholy Hussar of the German Legion related to the theme of Captivity, Restriction, and Escape.
Part 1 Quotes