Download this LitChart! (PDF)
Teachers and parents! Struggling with distance learning? Our Teacher Edition on The Myth of the Latin Woman can help.

Welcome to the LitCharts study guide on Judith Ortiz Cofer's The Myth of the Latin Woman. Created by the original team behind SparkNotes, LitCharts are the world's best literature guides.

The Myth of the Latin Woman: Introduction

A concise biography of Judith Ortiz Cofer plus historical and literary context for The Myth of the Latin Woman.

The Myth of the Latin Woman: Plot Summary

A quick-reference summary: The Myth of the Latin Woman on a single page.

The Myth of the Latin Woman: Detailed Summary & Analysis

In-depth summary and analysis of every of The Myth of the Latin Woman. Visual theme-tracking, too.

The Myth of the Latin Woman: Themes

Explanations, analysis, and visualizations of The Myth of the Latin Woman's themes.

The Myth of the Latin Woman: Quotes

The Myth of the Latin Woman's important quotes, sortable by theme, character, or .

The Myth of the Latin Woman: Characters

Description, analysis, and timelines for The Myth of the Latin Woman's characters.

The Myth of the Latin Woman: Symbols

Explanations of The Myth of the Latin Woman's symbols, and tracking of where they appear.

The Myth of the Latin Woman: Theme Wheel

An interactive data visualization of The Myth of the Latin Woman's plot and themes.

Born in Hormigueros, Puerto Rico, Judith Ortíz Cofer moved with her family to the United States as a young child. Initially residing in Paterson, New Jersey, the family made frequent trips back to Hormigueros, and ultimately moved to Augusta, Georgia when Cofer was a teenager. Cofer primarily received her education in the United States but also attended Puerto Rican schools when she lived with her grandmother in Hormigueros. This experience of growing up between two cultures profoundly shaped Cofer’s identity and creative pursuits. She became interested in literature, translation, and cultural comparison, and eventually received a B.A. in English from Augusta College and an M.A. in English literature from Florida Atlantic University. Cofer became a prolific and celebrated writer across multiple genres, including poetry, creative nonfiction, short fiction, children’s literature, and memoir. Many of her best-known works, including The Latin Deli: Telling the Lives of Barrio Women (which contains “The Myth of the Latin Woman”) and Silent Dancing: A Partial Remembrance of a Puerto Rican Childhood, blend multiple genres, including personal essays, poetry, and short fiction. From 1984 to 2013, she served as the Franklin Professor of English and Creative Writing at the University of Georgia. She was diagnosed with a rare type of liver cancer soon after her retirement, and she passed away three years later.
Get the entire The Myth of the Latin Woman LitChart as a printable PDF.
"My students can't get enough of your charts and their results have gone through the roof." -Graham S.
Download 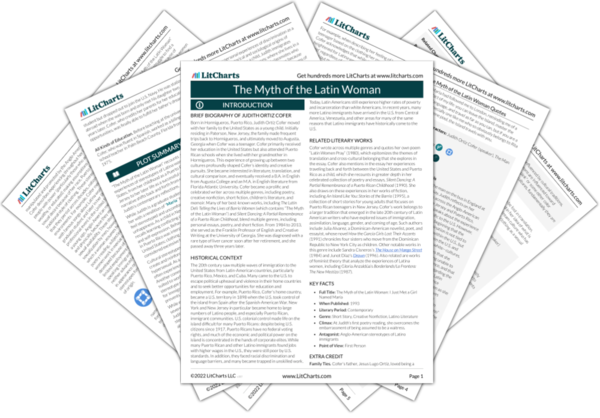 Historical Context of The Myth of the Latin Woman

The 20th century saw multiple waves of immigration to the United States from Latin-American countries, particularly Puerto Rico, Mexico, and Cuba. Many came to the U.S. to escape political upheaval and violence in their home countries and to seek better opportunities for education and employment. For example, Puerto Rico, Cofer’s home country, became a U.S. territory in 1898 when the U.S. took control of the island from Spain after the Spanish-American War. New York and New Jersey in particular became home to large numbers of Latino people, and especially Puerto Rican, immigrant communities. U.S. colonial control made life on the island difficult for many Puerto Ricans: despite being U.S. citizens since 1917, Puerto Ricans have no federal voting rights, and much of the economic and political power on the island is concentrated in the hands of corporate elites. While many Puerto Rican and other Latino immigrants found jobs with higher wages in the U.S., they were still poor by U.S. standards. In addition, they faced racial discrimination and language barriers, and many became trapped in unskilled work. Today, Latin Americans still experience higher rates of poverty and incarceration than white Americans. In recent years, many more Latino immigrants have arrived in the U.S. from Central America, Venezuela, and other areas for many of the same reasons that Latino immigrants have historically come to the U.S.

Other Books Related to The Myth of the Latin Woman

Cofer wrote across multiple genres and quotes her own poem “Latin Women Pray” (1980), which epitomizes the themes of translation and cross-cultural belonging that she explores in the essay. Cofer also mentions in the essay her experiences traveling back and forth between the United States and Puerto Rico as a child, which she recounts in greater depth in her celebrated collection of poetry and essays, Silent Dancing: A Partial Remembrance of a Puerto Rican Childhood (1990). She also draws on these experiences in her works of fiction, including An Island Like You: Stories of the Barrio (1995), a collection of short stories for young adults that focuses on Puerto Rican teenagers in New Jersey. Cofer’s work belongs to a larger tradition that emerged in the late 20th century of Latin American writers who have explored issues of immigration, assimilation, language, gender, and coming of age. Such authors include Julia Alvarez, a Dominican-American novelist, poet, and essayist, whose novel How the García Girls Lost Their Accents (1991) chronicles four sisters who move from the Dominican Republic to New York City as children. Other notable works in this genre include Sandra Cisneros’s The House on Mango Street (1984) and Junot Díaz’s Drown (1996). Also related are works of feminist theory that analyze the experiences of Latina women, including Gloria Anzaldúa’s Borderlands/La Frontera: The New Mestiza (1987).
Key Facts about The Myth of the Latin Woman

Extra Credit for The Myth of the Latin Woman

Family Ties. Cofer’s father, Jesus Lugo Ortíz, loved being a student but dropped out to join the U.S. Navy. He was stationed abroad when she was born and only met his daughter two years later. Cofer, who credits her parents for her educational opportunities, was finally able to fulfill her father’s dream.

All Kinds of Education. Before teaching at the university level, Cofer, who was fluent in Spanish, worked as a bilingual public school teacher in Palm Beach County, Florida from 1974 to 1975. 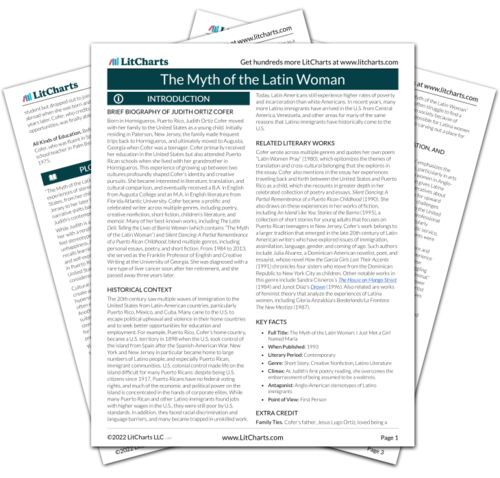 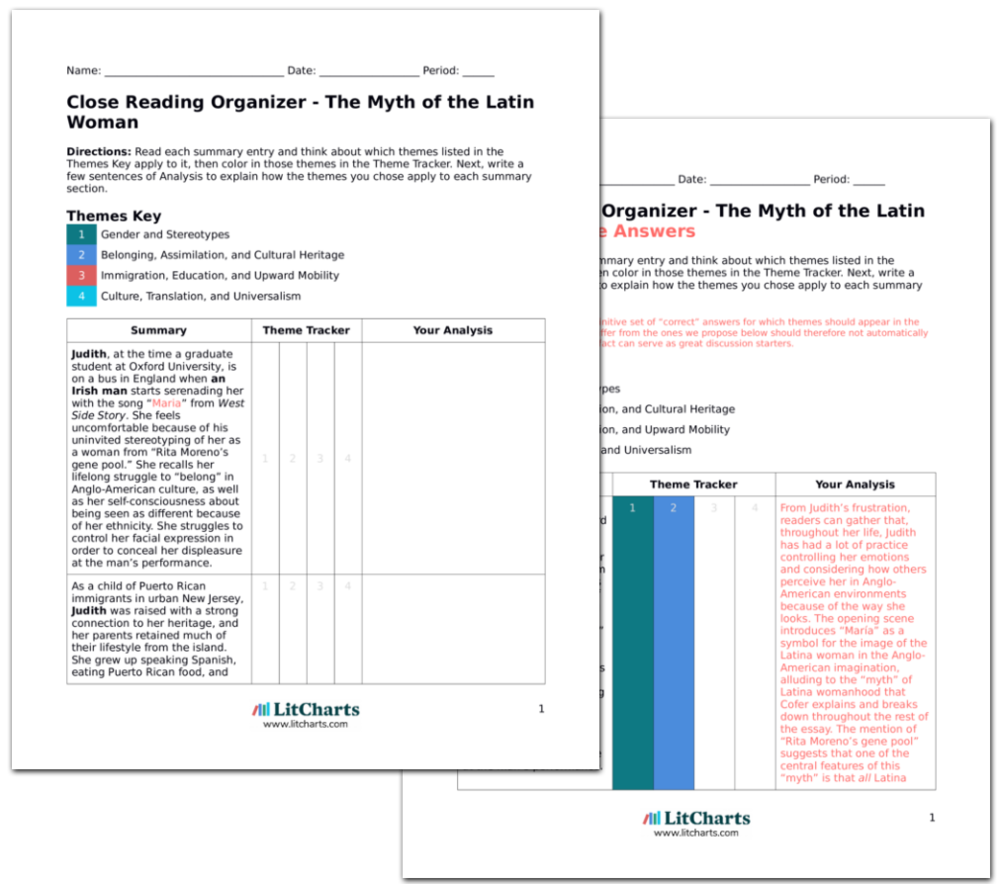