Download this LitChart! (PDF)
Teachers and parents! Struggling with distance learning? Our Teacher Edition on The Origin of Species can help.

Welcome to the LitCharts study guide on Charles Darwin's The Origin of Species. Created by the original team behind SparkNotes, LitCharts are the world's best literature guides.

The Origin of Species: Introduction

A concise biography of Charles Darwin plus historical and literary context for The Origin of Species.

The Origin of Species: Plot Summary

A quick-reference summary: The Origin of Species on a single page.

In-depth summary and analysis of every chapter of The Origin of Species. Visual theme-tracking, too.

The Origin of Species: Themes

Explanations, analysis, and visualizations of The Origin of Species's themes.

The Origin of Species: Quotes

The Origin of Species's important quotes, sortable by theme, character, or chapter.

The Origin of Species: Characters

Description, analysis, and timelines for The Origin of Species's characters.

Description, analysis, and timelines for The Origin of Species's terms.

The Origin of Species: Symbols

Explanations of The Origin of Species's symbols, and tracking of where they appear.

The Origin of Species: Theme Wheel

An interactive data visualization of The Origin of Species's plot and themes.

Charles Darwin was an English naturalist and writer best known for developing and popularizing his theory of evolution. He remains one of the most renowned scientists of all time, and his landmark book The Origin of Species (first published in 1859) remains influential. Darwin grew up in a wealthy English family and read widely, although he disappointed his father by failing to follow in his footsteps and become a doctor. While Darwin had long been interested in nature, the turning point in his life came when he joined the crew of the H.M.S. Beagle on a voyage that included a stop at the Galapagos Islands. His observations on that voyage—most notably of the different types of finches on the islands—helped spur his theories about natural selection and evolution that he would develop over the course of his career, most notably in The Origin of Species, but also in his later books like The Descent of Man (1871) and The Expression of the Emotions in Man and Animals (1872). By the time Darwin died in 1882, he was already regarded as a revolutionary scientist, and he continues to be studied, debated, and celebrated into the present.
Get the entire The Origin of Species LitChart as a printable PDF.
"My students can't get enough of your charts and their results have gone through the roof." -Graham S.
Download 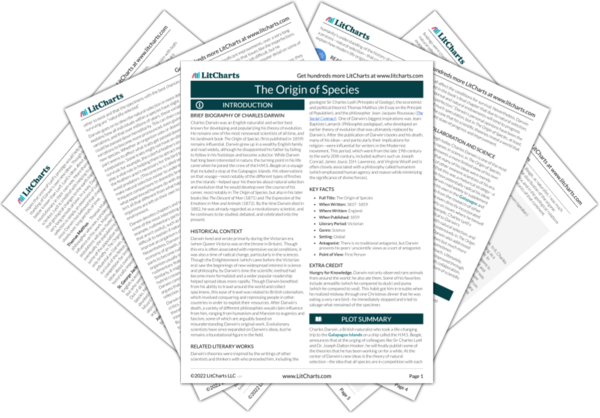 Historical Context of The Origin of Species

Darwin lived and wrote primarily during the Victorian era (when Queen Victoria was on the throne in Britain). Though this era is often associated with repressive social conditions, it was also a time of radical change, particularly in the sciences. Though the Enlightenment (which came before the Victorian era) saw the beginnings of new widespread interest in science and philosophy, by Darwin’s time the scientific method had become more formalized and a wider popular readership helped spread ideas more rapidly. Though Darwin benefited from his ability to travel around the world and collect specimens, this ease of travel was related to British colonialism, which involved conquering and repressing people in other countries in order to exploit their resources. After Darwin’s death, a variety of different philosophies would claim influence from him, ranging from humanism and Marxism to eugenics and fascism, some of which are arguably based on misunderstanding Darwin’s original work. Evolutionary scientists have since expanded on Darwin’s ideas, but he remains a foundational figure in the field.

Other Books Related to The Origin of Species

Darwin’s theories were inspired by the writings of other scientists and thinkers with who preceded him, including the geologist Sir Charles Lyell (Principles of Geology), the economist and political theorist Thomas Malthus (An Essay on the Principle of Population), and the philosopher Jean-Jacques Rousseau (The Social Contract). One of Darwin’s biggest inspirations was Jean-Baptiste Lamarck (Philosophie zoologique), who developed an earlier theory of evolution that was ultimately replaced by Darwin’s. After the publication of Darwin’s books and his death, many of his ideas—and particularly their implications for religion—were influential for writers in the Modernist movement. This period, which went from the late 19th century to the early 20th century, included authors such as Joseph Conrad, James Joyce, D.H. Lawrence, and Virginia Woolf and is often closely associated with a philosophy called humanism (which emphasized human agency and reason while minimizing the significance of divine forces).
Key Facts about The Origin of Species

Extra Credit for The Origin of Species

Hungry for Knowledge. Darwin not only observed rare animals from around the world: he also ate them. Some of his favorites include armadillo (which he compared to duck) and puma (which he compared to veal). This habit got him in trouble when he realized midway through one Christmas dinner that he was eating a very rare bird—he immediately stopped and tried to salvage what remained of the specimen. 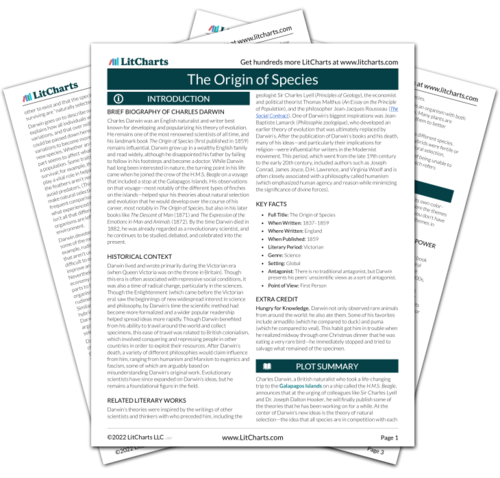 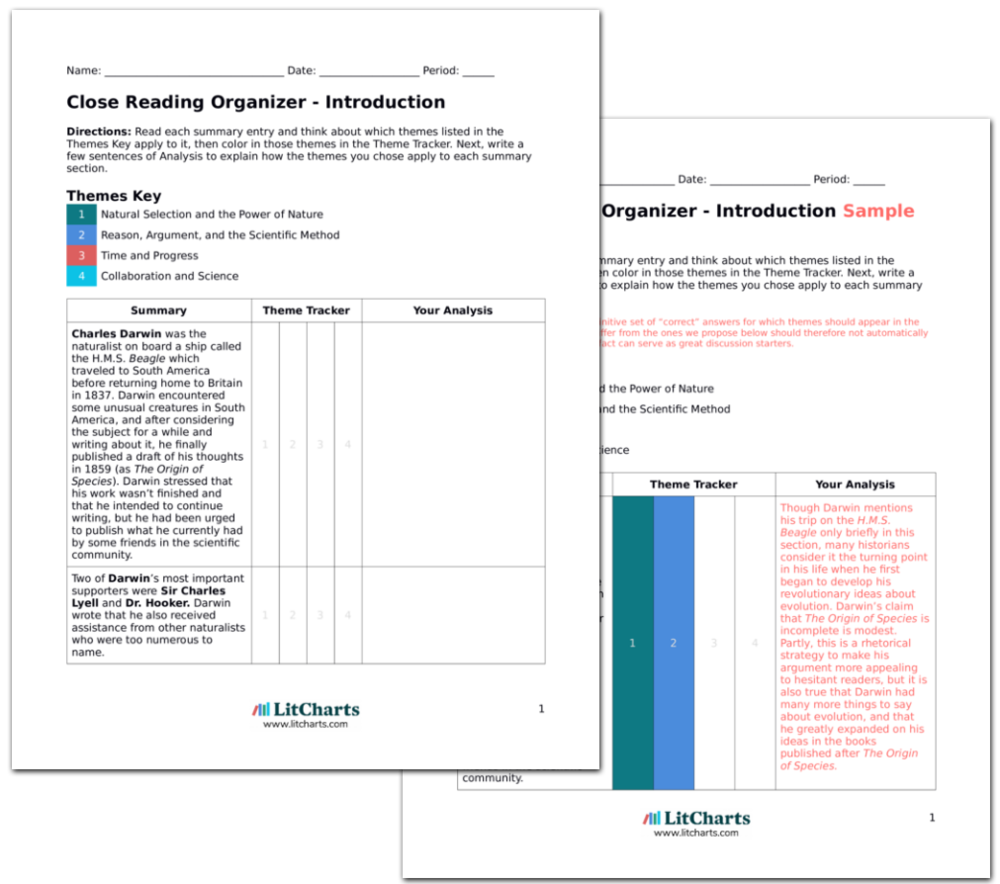