Download this LitChart! (PDF)
Teachers and parents! Struggling with distance learning? Our Teacher Edition on The Outsiders can help.

Welcome to the LitCharts study guide on S. E. Hinton's The Outsiders. Created by the original team behind SparkNotes, LitCharts are the world's best literature guides.

A concise biography of S. E. Hinton plus historical and literary context for The Outsiders.

A quick-reference summary: The Outsiders on a single page.

In-depth summary and analysis of every chapter of The Outsiders. Visual theme-tracking, too.

Explanations, analysis, and visualizations of The Outsiders's themes.

The Outsiders's important quotes, sortable by theme, character, or chapter.

Description, analysis, and timelines for The Outsiders's characters.

Explanations of The Outsiders's symbols, and tracking of where they appear.

An interactive data visualization of The Outsiders's plot and themes.

S. E. Hinton grew up in Tulsa, Oklahoma, the city in which The Outsiders is set. Writing helped her to process her experiences and find refuge from her troubled home life. During Hinton's teenage years, she wrote two books that were unpublished before she wrote The Outsiders, which was published when she was 19 years old. The book was based on the social problems she witnessed at her Tulsa high school. After The Outsiders, she wrote several other young adult books. In recent years, she has published children's fiction and adult fiction as well. In 1988, the American Library Association awarded her the Margaret A. Edwards Award, which honors the work of authors whose books have proven to speak for and to adolescents. She was also awarded the 1998 Arrell Gibson Lifetime Achievement Award by the Oklahoma Center for the Book. Hinton lives in Tulsa with her husband.
Get the entire The Outsiders LitChart as a printable PDF.
"My students can't get enough of your charts and their results have gone through the roof." -Graham S.
Download 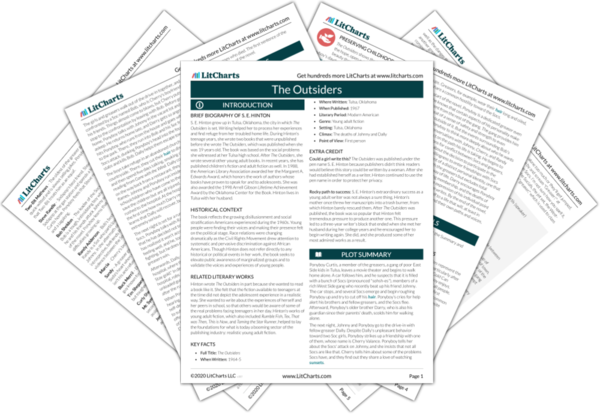 Historical Context of The Outsiders

The book reflects the growing disillusionment and social stratification Americans experienced during the 1960s. Young people were finding their voices and making their presence felt on the political stage. Race relations were changing dramatically as the Civil Rights Movement drew attention to systematic and pervasive discrimination against African Americans. Though Hinton does not refer directly to any historical or political events in her work, the book seeks to elevate public awareness of marginalized groups and to validate the voices and experiences of young people.

Other Books Related to The Outsiders

Hinton wrote The Outsiders in part because she wanted to read a book like it. She felt that the fiction available to teenagers at the time did not depict the adolescent experience in a realistic way. She wanted to write about the experiences of herself and her peers in school, so that others would be aware of some of the real problems facing teenagers in her day. Hinton's works of young adult fiction, which also included Rumble Fish, Tex, That was Then, This is Now, and Taming the Star Runner, helped to lay the foundations for what is today a booming sector of the publishing industry: realistic young adult fiction.
Key Facts about The Outsiders

Extra Credit for The Outsiders

Could a girl write this? The Outsiders was published under the pen name S. E. Hinton because publishers didn't think readers would believe this story could be written by a woman. After she had established herself as a writer, Hinton continued to use the pen name in order to protect her privacy.

Rocky path to success: S. E. Hinton's extraordinary success as a young adult writer was not always a sure thing. Hinton's mother once threw her manuscripts into a trash burner, from which Hinton barely rescued them. After The Outsiders was published, the book was so popular that Hinton felt tremendous pressure to produce another one. This pressure led to a three-year writer's block that ended when she met her husband during her college years and he encouraged her to begin writing again. She did, and she produced some of her most admired works as a result. 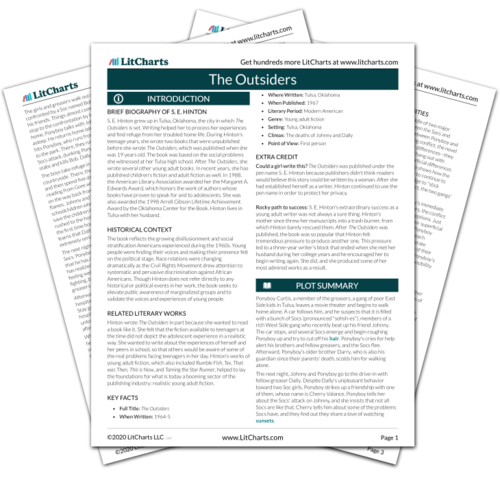 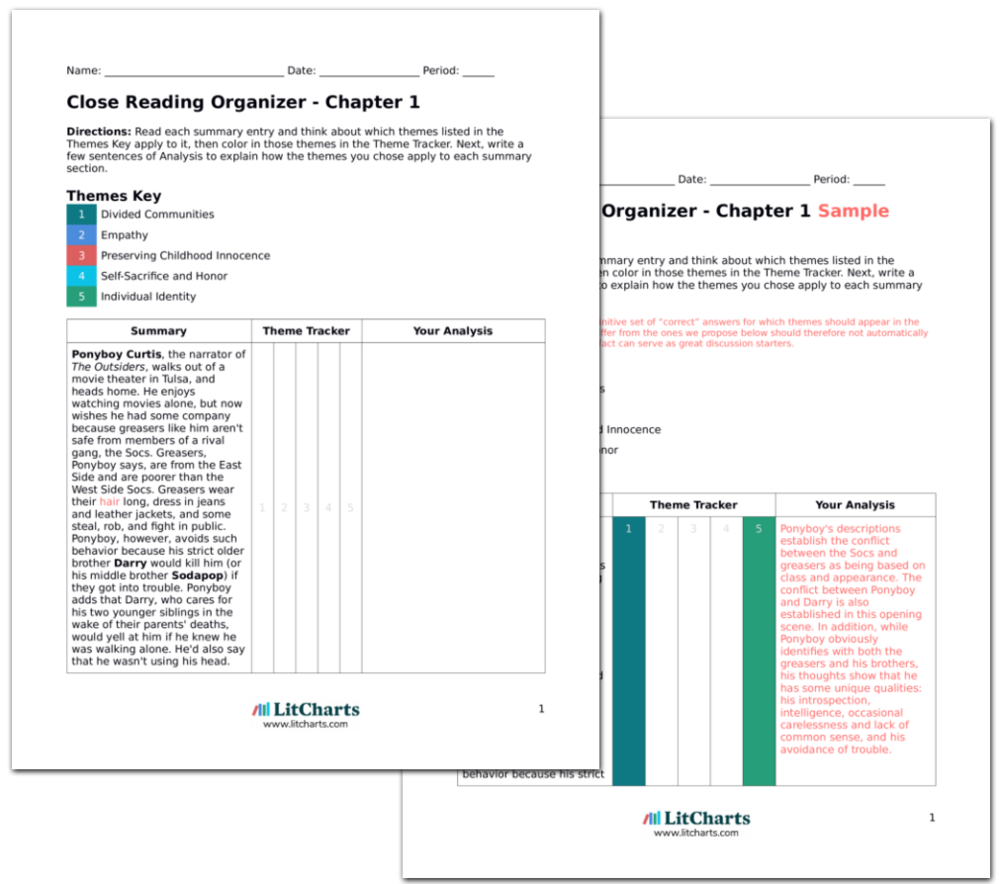