Download this LitChart! (PDF)
Teachers and parents! Struggling with distance learning? Our Teacher Edition on The Playboy of the Western World can help.

Get LitCharts A+
LitCharts assigns a color and icon to each theme in The Playboy of the Western World, which you can use to track the themes throughout the work.

Synge is careful throughout The Playboy of the Western World to render the speech of its coastal community as faithfully as possible. He expressly states this aim in the preface, saying, “I have used one or two words only, that I have not heard among the country people of Ireland.” He views his art as being a “collaboration” between the artist and the “folk-imagination,” stating that the “wildest sayings and ideas in this play are tame indeed compared with the fancies one might hear in any little hillside cabin in Geesala, or Carraroe, or Dingle Bay” (all rural Irish communities). Synge’s play thus depends on an element of trust between the artist and society—the claim that the former can truly represent the latter. This is especially interesting in Synge’s case, as he did not have a rural upbringing.

Whatever opinion audience members have on this question of authentic representation, the play is undoubtedly populated with distinctly Irish English ways of speaking. As one example among many, the play makes frequent use of “I’m after” to indicate “I have just”—this is known as the “hot news perfect” in Irish English. Widow Quin, when she arrives at the pub, says, “I’m after meeting Shawn Keogh and Father Reilly below,” indicating that this has just happened moments ago. By advocating this approach to the language of a given community, Synge attempts to draw the audience’s attention to the power of language to shape and capture reality. The lives of those involved with the pub, he seems to say, are intertwined with the way in which they talk to one another.

But faithful representation of the community and the rendering of real life are not the only argument for the power of language in the play. Synge grants Christy Mahon with a lyrical gift in his speech—a command of the sensory elements of language and the accomplished use of imagery. This helps him win over the villager’s affections—in particular Pegeen Mike’s—and stands as an analogy for Synge’s desire for his audience to buy into the beauty and power of the rural Irish English way of speaking (though there is, of course, not one single definitive “way”). As Christy grows in confidence throughout the play, so too does his willingness to speak in a lyrical way; when he first arrives, his speech is more disjointed and abrupt. This, combined with his aura of heroism, has a powerful effect on Pegeen Mike, who falls under the spell of his words. Sensing his own verbal power, Christy asks Pegeen, “Isn’t there the light of seven heavens in your heart alone, the way you’ll be an angel’s lamp to me from this out.” This is the moment at which she agrees to marry him, saying that “any girl would walk her heart out before she’d meet a young man was your like for eloquence or talk at all.” Talking, here, functions as a kind of seduction that reminds the viewer of “the gift of the gab,” a phrase denoting eloquence and skill with speaking. This is especially associated—sometimes to the point of stereotype—with Ireland and the Irish people. Whether the viewer agrees with this association or not, Synge makes the link between the rural Irish and the power of words. On that note, it’s worth remembering that Christy is not an educated man. He has spent most of his life wandering fields with his father, doing menial work. His gift for language, then, is presented as a kind of innate quality, again reinforcing this association between rural Irish life and lyricism.

The Playboy of the Western World is a beautiful-sounding play that is a deliberate attempt on Synge’s part to draw his audience’s attention to the artistic possibilities of Irish English. This is part of a wider argument that insists on the multi-layered power of language. If the play is effective in its intentions—that is, if it captivates its audience—then it too becomes an analogy for the argument contained within: that words are a powerful representation of the community that uses them. This approach wasn’t without controversy, however, as some of the play’s nationalist observers objected in its first performances that Irish English—as opposed to Gaelic Irish—could only ever be the language of Ireland’s English oppressors, rather than a true embodiment of something authentically Irish.

The Power of Language ThemeTracker

The ThemeTracker below shows where, and to what degree, the theme of The Power of Language appears in each act of The Playboy of the Western World. Click or tap on any chapter to read its Summary & Analysis.
How often theme appears:
act length:
Act
Act 1
1
Act 2
2
Act 3
3
Get the entire The Playboy of the Western World LitChart as a printable PDF.
"My students can't get enough of your charts and their results have gone through the roof." -Graham S.
Download 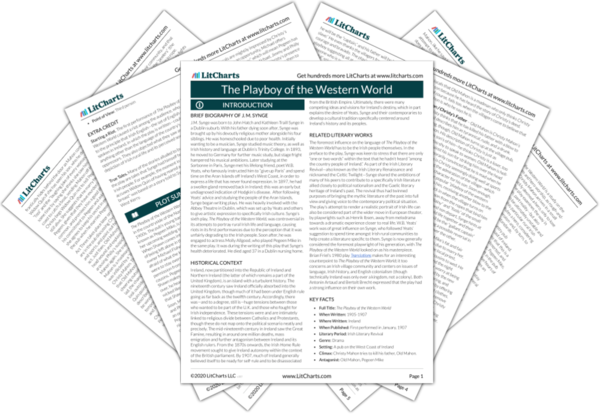 Below you will find the important quotes in The Playboy of the Western World related to the theme of The Power of Language.
Act 1 Quotes

PEGEEN. Where now will you meet the like of Daneen Sullivan knocked the eye from a peeler, or Marcus Quin, God rest him, got six months for maiming ewes, and he a great warrant to tell stories of holy Ireland till he’d have the old women shedding down tears about their feet. Where will you find the like of them. I’m saying?

SHAWN (timidly). If you don’t, it’s a good job, maybe; for (with peculiar emphasis on the words) Father Reilly has small conceit to have that kind walking around and talking to the girls.

PEGEEN (impatiently, throwing water from basin out of the door). Stop tormenting me with Father Reilly (imitating his voice) when I’m asking only what way I’ll pass these twelve hours of dark, and not take my death with the fear.

CHRISTY (going over to her, gradually raising his voice). I’ve said it nowhere till this night, I’m telling you, for I’ve seen none the like of you the eleven long days I am walking the world, looking over a low ditch or a high ditch on my north or my south, into stony scattered fields, or scribes of bog, where you’d see young, limber girls, and fine prancing women making laughter with the men.

PEGEEN. If you weren’t destroyed travelling, you’d have as much talk and streeleen, I’m thinking, as Owen Roe O’Sullivan or the poets of the Dingle Bay, and I’ve heard all times it’s the poets are your like, fine fiery fellows with great rages when their temper’s roused.

CHRISTY. […] Well, it’s a clean bed and soft with it, and it’s great luck and company I’ve won me in the end of time— two fine women fighting for the likes of me— till I’m thinking this night wasn’t I a foolish fellow not to kill my father in the years gone by.

CHRISTY (impressively). With that the sun came out between the cloud and the hill, and it shining green in my face. “God have mercy on your soul,” says he, lifting a scythe; “or on your own,” says I, raising the loy.

HONOR. He tells it lovely.

CHRISTY (flattered and confident, waving bone). He gave a drive with the scythe, and I gave a lep to the east. Then I turned around with my back to the north, and I hit a blow on the ridge of his skull, laid him stretched out, and he split to the knob of his gullet.

[He raises the chicken bone to his Adam’s apple.]

CHRISTY. I wish to God I was letting on; but I was lonesome all times, and born lonesome, I’m thinking, as the moon of dawn.

PEGEEN (puzzled by his talk). Well, it’s a story I’m not understanding at all why you’d be worse than another, Christy Mahon, and you a fine lad with the great savagery to destroy your da.

CHRISTY. It’s little I’m understanding myself, saving only that my heart’s scalded this day, and I going off stretching out the earth between us, the way I’ll not be waking near you another dawn of the year till the two of us do arise to hope or judgment with the saints of God.

CHRISTY. It’s little you’ll think if my love’s a poachers, or an earl’s itself, when you’ll feel my two hands stretched around you, and I squeezing kisses on your puckered lips, till I’d feel a kind of pity for the Lord God is all ages sitting lonesome in his golden chair.

PEGEEN. That’ll be right fun, Christy Mahon, and any girl would walk her heart out before she’d meet a young man was your like for eloquence, or talk, at all.

CHRISTY (encouraged). Let you wait, to hear me talking, till we’re astray in Erris, when Good Friday’s by, drinking a sup from a well, and making mighty kisses with our wetted mouths, or gaming in a gap or sunshine, with yourself stretched back unto your necklace, in the flowers of the earth.

CHRISTY (in low and intense voice). Shut your yelling, for if you’re after making a mighty man of me this day by the power of a lie, you’re setting me now to think if it’s a poor thing to be lonesome, it’s worse maybe to go mixing with the fools of earth.

[Mahon makes a movement towards him.]

CHRISTY (almost shouting). Keep off…lest I do show a blow unto the lot of you would set the guardian angels winking in the clouds above.

[He swings round with a sudden rapid movement and picks up a loy.]

CROWD (half frightened, half amused). He’s going mad! Mind yourselves! Run from the idiot!

CHRISTY. If I am an idiot, I’m after hearing my voice this day saying words would raise the topknot on a poet in a merchant’s town.

PEGEEN. I’ll say, a strange man is a marvel, with his mighty talk; but what’s a squabble in your back-yard, and the blow of a loy, have taught me that there’s a great gap between a gallous story and a dirty deed. (To Men.) Take him on from this, or the lot of us will be likely put on trial for his deed to-day.

CHRISTY (with horror in his voice). And it’s yourself will send me off, to have a horny-fingered hangman hitching his bloody slip-knots at the butt of my ear. 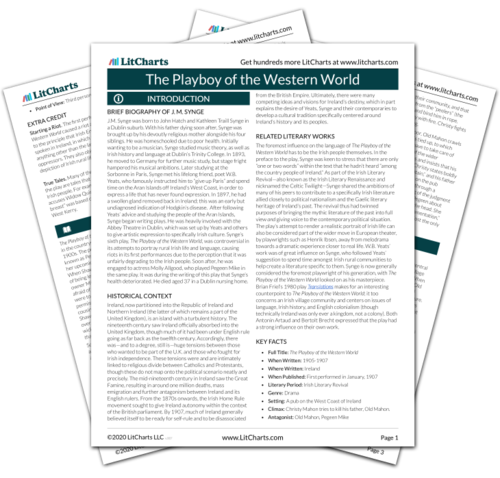 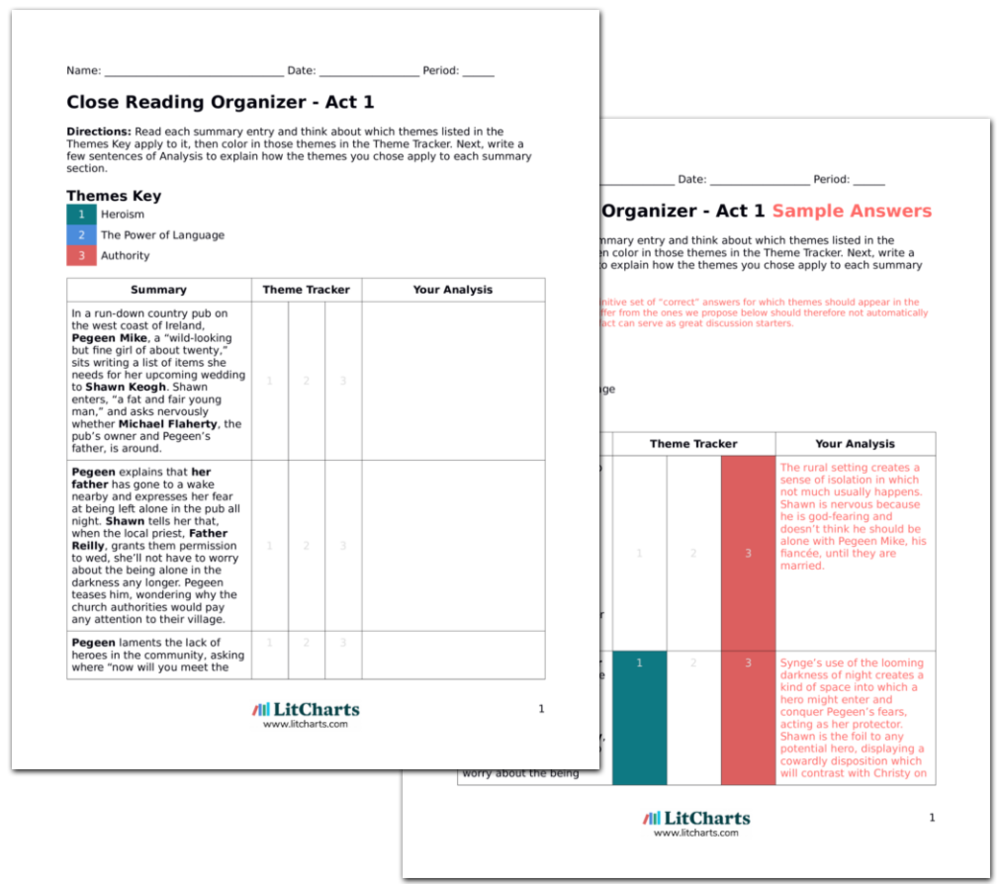