Act One of The Seagull opens on a summer evening at Pyotr Nikolaevich Sorin’s country estate. Down near the expansive lake, a makeshift stage has been built—Sorin’s nephew Konstantin Gavrilovich Treplyov is putting on an avant-garde play for Sorin and the rest of his summer guests, including Treplyov’s mother and Sorin’s sister Arkadina Irina Nikolaevna, a famous actress, and her lover Boris Alekseevich Trigorin, a famous writer. Among the other guests at the estate are the caretaker Ilya Afanasevich Shamraev, his wife Polina Andreevna, and their daughter Masha, who pines for Treplyov; a poor schoolteacher named Semyon Semyonovich Medvedenko, who is hopelessly in love with Masha; and Evgeny Serveevich Dorn, a country doctor and Sorin’s longtime friend.

Treplyov fusses about the stage, double-checking special effects with the workman Yakov while he confides in Sorin that he’s worried his love and his muse Nina Mikhailovna Zarechnaya will be late for her performance. Treplyov tells Sorin that he’s anxious about his career as a writer, and worries that people only indulge his work because of his status as Arkadina’s son. The men discuss Arkadina’s narcissism and jealousy, as well as her ongoing affair with Trigorin, until Nina arrives, breathless and excited. She kisses Treplyov and explains that she’s managed to sneak away from her controlling father and stepmother, who live across the lake, for only an hour’s time.

Treplyov calls the guests down to the lake and insists the performance begin immediately. Treplyov’s play is set on a barren, abandoned version of Earth, many years after a terrible apocalypse. Nina, the only character, plays the “universal soul” of the human spirit who has been left to languish on the ruined earth and fend off confrontations with Satan. Arkadina loudly mocks the “avant-garde” nature of the play from the audience until Treplyov cuts the performance short and storms away. Nina comes out from backstage and greets Arkadina and Trigorin warmly, but soon tells them that she has to go home before she incurs her father’s anger. Treplyov returns, hiding from Masha, who has been wandering around looking for him. When he realizes that Nina has left, he chases after her. Masha returns to the stage to find Treplyov gone. Weeping, she confides in Dorn about the terrible pain she feels. The kindly Dorn laments the sadness of all the star-crossed young lovers around him.

In Act Two, which takes place later in the week, Sorin’s guests converge on a large croquet lawn. Nina, whose father and stepmother are out of town for several days, is ecstatic about the chance to spend some uninterrupted time down at the lake with her idols. Arkadina regales Nina with tales of her glamorous life in Moscow and insults the boring, lazy nature of life in the country. Arkadina asks Shamraev and Polina to ready a horse for her to take into town for a bit, but there are none available. Arkadina throws a fit and vows to leave for Moscow immediately. She shouts out across the lake for Trigorin to follow her inside and pack to leave. Polina, during a moment alone with her Dorn (her secret lover), begs him to take her away from the countryside—but he will not commit to her.

As everyone stalks off in anger, Nina is left alone, and remarks to herself how strange it is to watch even famous people behaving so provincially. Treplyov, who has been sulking for days due to Nina’s growing indifference towards him, approaches Nina with a slain gull in his hands and drops it at her feet. The horrified Nina tells Treplyov she no longer understands anything about him. As Trigorin approaches, Treplyov disgustedly tells Nina to enjoy her time with a “real genius,” then leaves her and Trigorin alone. Nina asks Trigorin what it’s like to be famous and confesses that she wishes she could be a beloved actress more than anything. Trigorin, though, says he envies Nina’s youth and naivete—he feels trapped in his life as a writer, unable to stop cannibalizing his own experiences for material and constantly living in fear of bad reviews. When Trigorin notices the gull at Nina’s feet, he takes out his notebook and jots down a note for a story about a girl who grows up on the shore of a lake until a man comes along and “destroys her” for lack of anything better to do with his time. Arkadina, leaning out of a window, calls out to Trigorin—she tells him they’re staying a little longer, after all. Nina is delighted.

At the start of Act Three, the dining room of Sorin’s estate is abuzz as Arkadina and Trigorin prepare to return to Moscow. A drunken Masha tells Trigorin that she plans to marry Medvedenko in an attempt to forget about her love for Treplyov, who recently attempted suicide but failed when the bullet merely grazed the side of his head. Masha speculates that the depressed Treplyov is jealous of Trigorin. Nina enters the room to say her goodbyes. She presents Trigorin with a special medallion she’s had engraved with the name of one of his novels and the numbers of a page and corresponding lines. Nina begs Trigorin not to forget her, and asks him to find her once more before he leaves. Arkadina and Sorin come into the room, but Trigorin runs out to find a copy of his book and look up the lines the medallion references. Arkadina says she feels bad about leaving with Sorin in poor health and Treplyov so fresh from a suicide attempt, but she is desperate to get back to the city. She considers leaving Sorin and Treplyov some money—but resolves that she needs the money to spend on her own costumes back in Moscow.

Treplyov comes into the room and asks Arkadina to change the bandages around his head. As Arkadina cleans her son’s wounds, he begs her to end her relationship with Trigorin—and warns her that Trigorin has designs on Nina. The offended Arkadina lashes out at Treplyov, calling him a “nobody,” and the two exchange fiery insults before running out of steam and apologizing to one another. Trigorin comes back into the room and reads aloud the lines Nina’s medallion makes reference to: “If ever my life is of use to you, come and take it.” Treplyov rushes out of the room, and Trigorin begs Arkadina to stay longer. Arkadina, realizing that Trigorin is indeed in love with Nina, throws herself at his feet and begs him not to abandon her. She tells him she won’t survive if the “greatest living writer” leaves her, and Trigorin succumbs to her flattery, agreeing to return to Moscow with her. The two of them head out to the station with Shamraev, Sorin, and Medvedenko. A few moments later, Trigorin rushes back in, having forgotten his walking stick. He bumps into Nina, who tells him she’s decided to flee home and move to Moscow to try her luck as an actress. Trigorin instructs Nina as to where she should stay, and promises to seek her out there before kissing her passionately.

Between Acts Three and Four, two years have elapsed. Treplyov is living at Sorin’s estate, and Masha, Medvedenko, Arkadina, and Trigorin are all visiting once again. Treplyov has become a “real writer” and has turned one of the house’s drawing rooms into a writing studio. In spite of her marriage to Medvedenko, Masha still pines for the increasingly-moody Treplyov. Sorin’s health has worsened, and he wrestles with his fear of death. The group discusses Nina Zarechnaya—Treplyov reports that after she moved to Moscow, she bore Trigorin a child. After the infant died, Trigorin abandoned her and went back to Arkadina, and Nina began touring the provinces with a third-rate theater company. Treplyov says that Nina has been rumored to be back in town for a little while, staying at a shabby hotel near the station. He seems to take great delight in reporting the hard times she’s fallen on to all the others—Sorin, however, laments Nina’s suffering.

Arkadina and Trigorin enter the room. Treplyov and Trigorin greet one another, and Arkadina attempts to settle the “grudge” between them by telling her son that Trigorin has purchased and brought along a copy of the latest magazine in which Treplyov has published. Arkadina suggests they all play a game of bingo, and everyone but the brooding Treplyov agrees to join. With Treplyov out on a walk, the others discuss his burgeoning career as a writer, but Arkadina admits she hasn’t read a single word he’s ever written. After the game of bingo, the group goes into the kitchen for a bite to eat. Treplyov returns from his walk and surveys his manuscript pages, cursing their mediocrity. Soon, there is a knock at the window: Treplyov is shocked to realize that Nina has come to visit. He welcomes her in, and she begs him to lock the doors of the room so that the others don’t see her in her current state. Nina is disheveled and confused, and speaks in a rambling, manic way, even breaking down in tears when she tries to discuss everyday things like books. It is clear that Treplyov is just as in love with her as he was years ago. He begs her to stay with him—without her, he says, he will never know happiness. Nina tells Treplyov that he shouldn’t love her, and calls herself a “gull” as she begins speaking about her disastrous affair with Trigorin. She confesses that though her life has become a “sordid” mess, she still dreams of achieving fame as a great actress. She tells Treplyov that she needs to leave, but entreats him to seek her out in Moscow once she makes it big. Nina embraces Treplyov and hurries out of the house.

Treplyov rips up all of his manuscripts before storming off into the next room. The group returns for another game of bingo, but have barely begun playing when they hear a loud noise in the next room. Arkadina worries that Treplyov has shot himself, so Dorn offers to go in and see what’s happened. He peeks in and reports back that his first-aid kit has simply fallen to the ground. Arkadina resumes the game. Dorn takes Trigorin aside, claiming he wants to discuss one of the man’s recent publications—once they are out of earshot, however, Dorn tells Trigorin to take Arkadina into the next room. Treplyov has indeed shot himself. 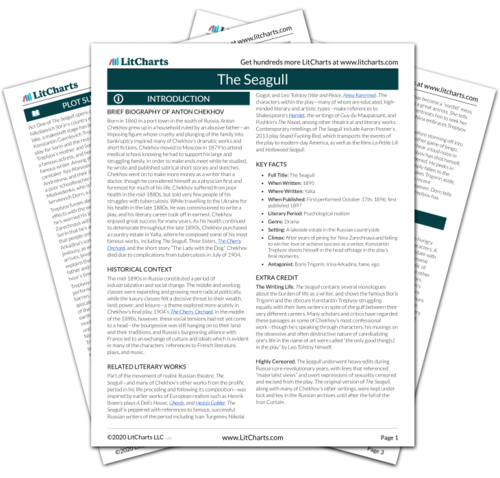 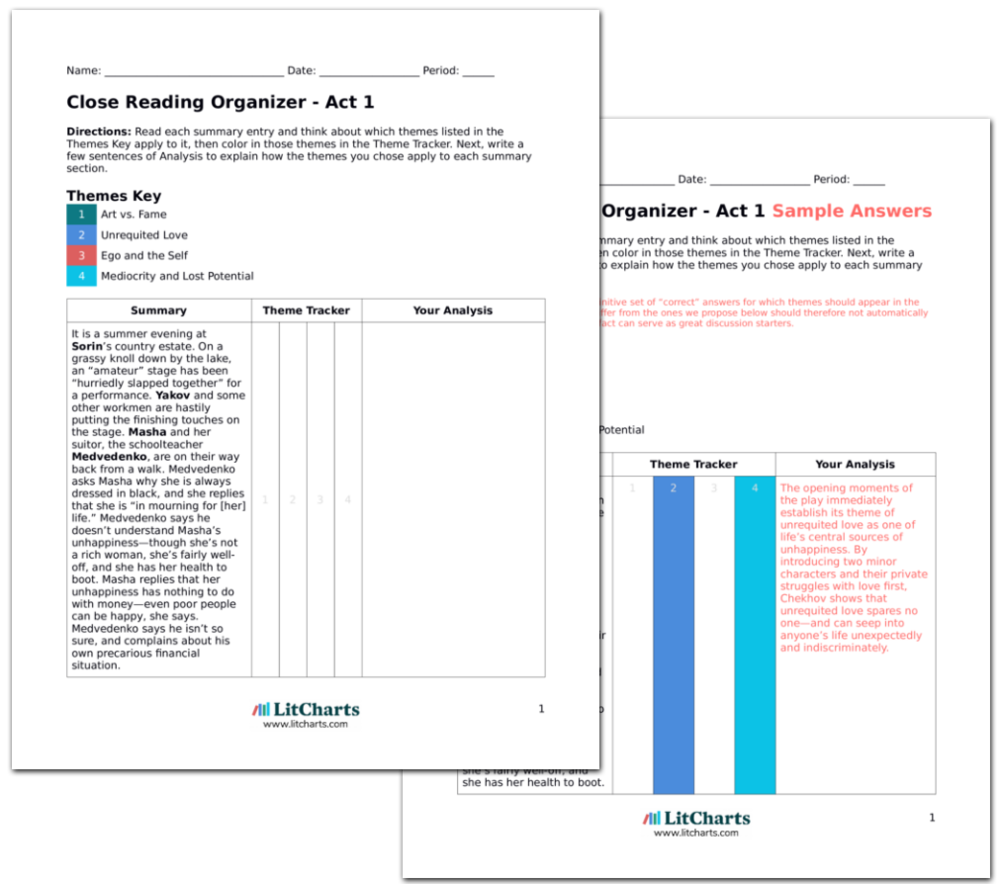