Download this LitChart! (PDF)
Teachers and parents! Struggling with distance learning? Our Teacher Edition on The Shoe-Horn Sonata can help.

Get LitCharts A+
LitCharts assigns a color and icon to each theme in The Shoe-Horn Sonata, which you can use to track the themes throughout the work.

In The Shoe-Horn Sonata, John Misto scrutinizes the effect pride has on people in times of distress. On the one hand, Sheila’s unflinching patriotism helps her get through the war, since her feelings of British superiority actually enable her to embody a stubborn kind of wherewithal, one linked to her ego. On the other hand, though, her conceited nationalism also becomes a point of tension in her relationship with Bridie, who bristles at her tireless patriotism. Sheila’s patriotic pride also sometimes gives her too much confidence, as is the case when she refuses to flee Singapore before the Japanese invasion—as Sheila’s mother haughtily proclaims, it would be dishonorable for an English woman to “run away from a few Orientals.” This, of course, is a tragically arrogant (and rather racist) way of thinking, one that leads to great misfortune and suffering. In turn, Misto shows both the benefits and dangers of pride and patriotism, implying that such forms of confidence and self-worth are only beneficial if they don’t also lead to excessive self-importance and scorn for others.

As early as the play’s third scene, it’s clear that Sheila is proud to be from England. In fact, this pride helps her confront adversity and hardship, as she calls upon her patriotism to get her through otherwise frightening events. For instance, when she’s floating in the freezing sea after her ship has just been bombed, she sings “a very moving and stirring hymn about the greatness of England—God’s chosen Empire.” This, in turn, helps her stay awake and, thus, alive. Shortly thereafter, she and Bridie are picked up by a Japanese ship, and though Sheila feels a sense of despair, she again looks to her patriotic pride as a source of strength. “I wanted to cry,” she explains. “But I reminded myself I was a Woman of the Empire. And it just wasn’t done to show fear to the natives.” Of course, it’s worth noting that Sheila’s pride in this moment also encompasses a rather racist mentality, as she thinks of herself as superior to the Japanese, whom she disparagingly refers to as “the natives.” As such, Misto shows the audience that Sheila’s pride is capable of comforting her in even the most frightening situations, though it also bears some uncomfortable implications about the way she looks down on other people.

Because Sheila tends to disparage others as a result of her patriotism, her relationship with Bridie—an Australian—sometimes suffers as a result of her unwavering national pride. When, for instance, Bridie suggests on-camera that the British were “thick” for letting their ships sail “straight into the Japanese fleet,” Sheila takes great offense, returning to the subject once they’re alone and going out of her way to insult the Australian Prime Minister. “That’s a side of you I’d forgotten,” Bridie replies. “Sheila the Patriot. It must have been hard to live out here [in Australia]—when your heart was so firmly entrenched in England.” Failing to pick up on her friend’s sarcasm, Sheila answers by saying, “One never stops being British. Nor does one want to.” This sentiment encapsulates Sheila’s commitment to her British identity, something she’s willing to defend even if it irks the people closest to her.

Interpersonal tensions aren’t the only drawbacks of Sheila’s patriotic ego. After all, it is exactly this kind of arrogance that leads her into trouble in the first place, as she refuses to flee Singapore when news first spreads that the Japanese are going to overtake the city. “We were patriotic,” she explains. “We didn’t want to leave. I remember mother saying, ‘Sheila, you and I are English women. We do not run away from a few Orientals…’” In this case, then, Sheila and her mother’s feelings of superiority lead them into trouble, since they’re too conceited to recognize a very real threat. Thinking of themselves as inherently better than the Japanese, they stubbornly ignore the frightening possibility that their precious British Empire will topple in Singapore, leaving them vulnerable and unprotected.

Although Sheila’s patriotism interferes with her and Bridie’s friendship and actively puts her life at risk, it’s worth acknowledging that it does give her something to live for after she’s captured by the Japanese. “You can snicker all you like,” she tells Bridie, “but at the very worst times in the camp—I’d remind myself I was part of an Empire—and if others could endure it, so could I.” While this may seem rather silly at first, there’s no denying that Sheila uses her faith in her country as a coping mechanism. Indeed, she takes comfort in the idea that she belongs to something larger and more important than herself—a notion that gives her the strength to “endure” hardship. In turn, readers see that there are certain aspects of patriotic pride that could be worth adopting. Although self-importance often invites trouble, Misto suggests that developing pride in moderation can create a sense of assurance and self-worth that just might save a person in their darkest hour. 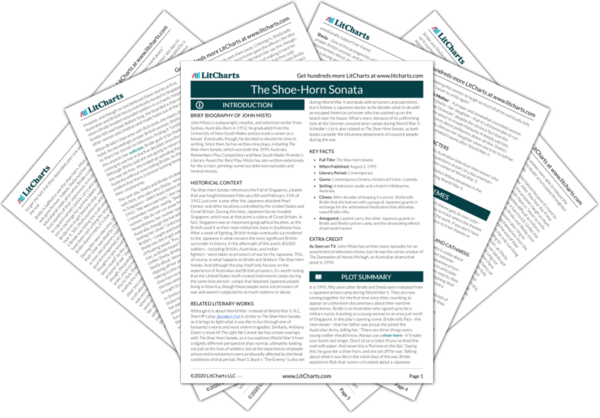 Pride and Patriotism Quotes in The Shoe-Horn Sonata

Below you will find the important quotes in The Shoe-Horn Sonata related to the theme of Pride and Patriotism.
Act One, Scene One Quotes

Towards the end—as the Japs got closer—some British officers held a meeting—to discuss the merits of shooting us. They promised we'd be buried with full military honours.

They’d heard that the Japs had been raping army nurses and they thought they’d be doing us a favour. They’re very considerate like that—the British. But since bullets were scarce, they decided to evacuate us.

BRIDIE: She was sure you’d consider it—‘unrefined’—going on television—airing your feelings.

SHEILA: [starting to unpack] Well you’ve got to admit it’s not very ‘dignified’.

BRIDIE: So why did you come [Casually, trying to make light of it] And don’t say you did it for the chance of seeing me. Not after fifty years of hiding—

Unlock with LitCharts A+
Act One, Scene Three Quotes

BRIDIE: [not meaning to be rude] The British were a bit thick sometimes.

SHEILA: [slightly annoyed] We were patriotic. We didn’t want to leave. I remember mother saying, ‘Sheila, you and I are English women. We do not run away from a few Orientals...’

Before I left mother said to me, ‘You’ll be living with Colonials now, so set a good example. Always wear gloves—wherever you go. Don’t socialize with Catholics—unless they’re French or titled. And never kiss an Australian on the lips.’

SHEILA instinctively reaches out to take BRIDIE’s hand. They hold hands. And once again they both look very vulnerable. We hear Japanese voices on the soundtrack.

SHEILA: I wanted to cry. [With resolution] But I reminded myself I was a Woman of the Empire. And it just wasn't done to show fear to the natives. [Wistful smile] I could almost hear my mother saying: ‘Chin up, gel! And where are your gloves?’

Unlock with LitCharts A+
Act One, Scene Four Quotes

SHEILA: You can snicker all you like— [Struggling to explain] but at the very worst times in the camp—I’d remind myself I was part of an Empire— and if others could endure it, so could I.

SHEILA: [defensively] It got me through the war.

BRIDIE: I got you through the war. Your Empire didn't give a damn. They left you to the Japs.

SHEILA: [very upset] If you say that tomorrow, I’ll go. I mean it.

I almost confided in mother once. [Sadly] Isn’t that amusing? It was just before I sailed from Singapore. I took her hand and whispered that... there was something I needed to tell her—about the Japanese. Mother poured herself a drink and said: ‘You know what the Bible says, my dear. “No cross, no crown.” We must pull up our socks and get on with it.’ Took more than a war to change Mother. 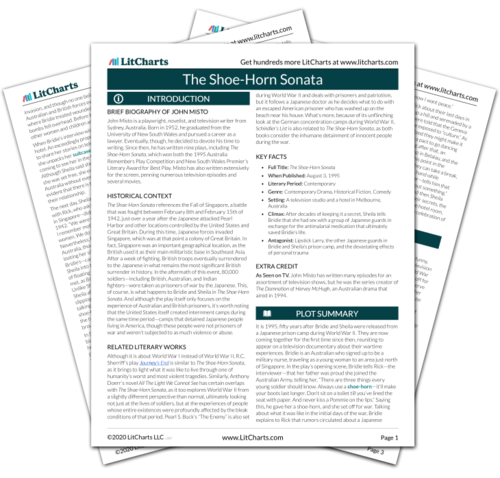 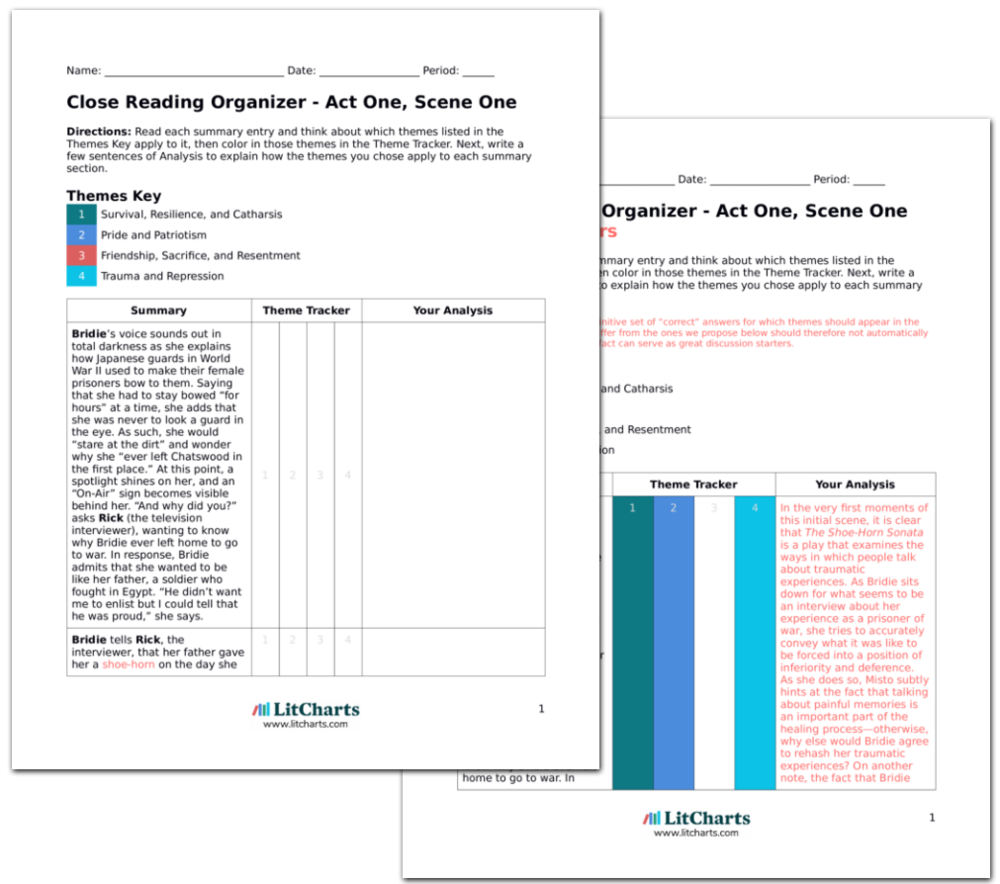