Thus Spoke Zarathustra
Introduction + Context
Plot Summary
Detailed Summary & Analysis
Zarathustra’s Prologue Of the Three Metamorphoses Of the Chairs of Virtue Of the Afterworldsmen Of the Despisers of the Body Of Joys and Passions Of the Pale Criminal Of Reading and Writing Of the Tree on the Mountainside Of the Preachers of Death Of War and Warriors Of the New Idol Of the Flies of the Market-Place Of Chastity Of the Friend Of the Thousand and One Goals Of Love of One’s Neighbour Of the Way of the Creator Of Old and Young Women Of the Adder’s Bite Of Marriage and Children Of Voluntary Death Of the Bestowing Virtue The Child with the Mirror On the Blissful Islands Of the Compassionate Of the Priests Of the Virtuous Of the Rabble Of the Tarantulas Of the Famous Philosophers The Night Song The Dance Song The Funeral Song Of Self-Overcoming Of the Sublime Men Of the Land of Culture Of Immaculate Perception Of Scholars Of Poets Of Great Events The Prophet Of Redemption Of Manly Prudence The Stillest Hour The Wanderer Of the Vision and the Riddle Of Involuntary Bliss Before Sunrise Of the Virtue that Makes Small On the Mount of Olives Of Passing By Of the Apostates The Home-Coming Of the Three Evil Things Of the Spirit of Gravity Of Old and New Law-Tables The Convalescent Of the Great Longing The Second Dance Song The Seven Seals (or: The Song of Yes and Amen) The Honey Offering The Cry of Distress Conversation with the Kings The Leech The Sorcerer Retired from Service The Ugliest Man The Voluntary Beggar The Shadow At Noontide The Greeting The Last Supper Of the Higher Man The Song of Melancholy Of Science Among the Daughters of the Desert The Awakening The Ass Festival The Intoxicated Song The Sign
Themes
All Themes Rethinking Morality The Superman and the Will to Power Death of God and Christianity Eternal Recurrence
Quotes
Characters
All Characters Zarathustra The Old Saint Tight-rope Walker The Ugliest Man
Terms
All Terms Superman Will to Power Eternal Recurrence
Symbols
All Symbols Sun, Noon, Noontide Lion

Download this LitChart! (PDF)
Teachers and parents! Struggling with distance learning? Our Teacher Edition on Thus Spoke Zarathustra can help.

Welcome to the LitCharts study guide on Friedrich Nietzsche's Thus Spoke Zarathustra. Created by the original team behind SparkNotes, LitCharts are the world's best literature guides.

A concise biography of Friedrich Nietzsche plus historical and literary context for Thus Spoke Zarathustra.

A quick-reference summary: Thus Spoke Zarathustra on a single page.

In-depth summary and analysis of every chapter of Thus Spoke Zarathustra. Visual theme-tracking, too.

Explanations of Thus Spoke Zarathustra's symbols, and tracking of where they appear.

Friedrich Nietzsche was one of the most influential philosophers in the modern period.  He was the son of a Lutheran minister, and many of his later ideas were developed in reaction to Christian teachings. A brilliant young student, Nietzsche was appointed to a university chair in classical philology at Basel when he was only 24 years old. Nietzsche was not a great success in the academic world, however: he became chronically ill in 1871, and he resigned his professorship in 1879 because of the sustaining a teaching schedule was too difficult (not to mention that his colleagues’ critiques led to his lectures being emptied out). He became a much more prolific writer after this, however, and developed his distinctive style, focusing on a critique of traditional morality and its European Christian foundations. In 1882, the year before he began writing Thus Spoke Zarathustra, Nietzsche also suffered the deepest romantic disappointment of his life when it became clear that he would never marry Lou Salomé, the woman he loved. Writing Zarathustra seems to have been part of how he resolved this heartbreak, and the book was also an intellectual breakthrough that helped him overcome his earlier nihilism. During the last decade of his life, Nietzsche suffered increasingly from dementia and was cared for by his sister, Elisabeth. He died of a stroke in 1900. After Nietzsche’s death, Elisabeth saw to the initial publication of his writings, though her anti-Semitic beliefs had an editorial influence on his work that Nietzsche would probably have rejected.
Get the entire Thus Spoke Zarathustra LitChart as a printable PDF.
"My students can't get enough of your charts and their results have gone through the roof." -Graham S.
Download 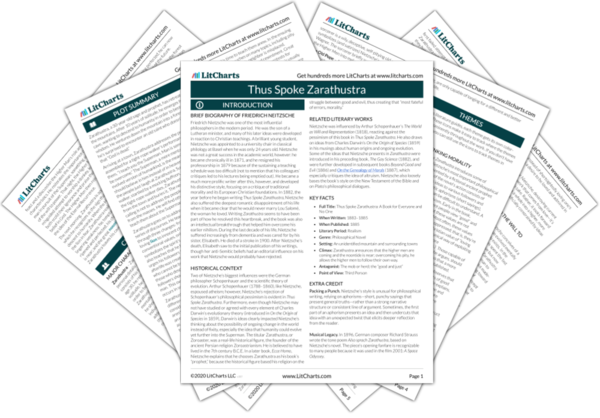 Two of Nietzsche’s biggest influences were the German philosopher Schopenhauer and the scientific theory of evolution. Arthur Schopenhauer (1788–1860), like Nietzsche, espoused atheism; however, Nietzsche’s rejection of Schopenhauer’s philosophical pessimism is evident in Thus Spoke Zarathustra. Furthermore, even though Nietzsche may not have studied or agreed with every element of Charles Darwin’s evolutionary theory (introduced in On the Origin of Species in 1859), Darwin’s ideas clearly impacted Nietzsche’s thinking about the possibility of ongoing change in the world instead of fixity, especially the idea that humanity could evolve yet further into the Superman. The titular Zarathustra, or Zoroaster, was a real-life historical figure, the founder of the ancient Persian religion Zoroastrianism. He is believed to have lived in the 7th century B.C.E. In a later book, Ecce Homo, Nietzsche explains that he chooses Zarathustra as his book’s “prophet,” because the historical figure based his religion on the struggle between good and evil, thus creating that “most fateful of errors, morality.”

Nietzsche was influenced by Arthur Schopenhauer’s The World as Will and Representation (1818), reacting against the pessimism of this book in Thus Spoke Zarathustra. He also draws on ideas from Charles Darwin’s On the Origin of Species (1859) in his musings about human origins and ongoing evolution. Some of the ideas that Nietzsche presents in Zarathustra were introduced in his preceding book, The Gay Science (1882), and were further developed in subsequent books Beyond Good and Evil (1886) and On the Genealogy of Morals (1887), which especially critiques the idea of altruism. Nietzsche also loosely bases the book’s style on the New Testament of the Bible and on Plato’s philosophical dialogues.
Key Facts about Thus Spoke Zarathustra

Packing a Punch. Nietzsche’s style is unusual for philosophical writing, relying on aphorisms—short, punchy sayings that present general truths—rather than a strong narrative structure or consistent line of argument. Sometimes, the first part of an aphorism presents an idea and then undercuts that idea with an unexpected twist that elicits deeper reflection from the reader.

Musical Legacy. In 1896, German composer Richard Strauss wrote the tone poem Also sprach Zarathustra, based on Nietzsche’s novel. The piece’s opening fanfare is recognizable to many people because it was used in the film 2001: A Space Odyssey. 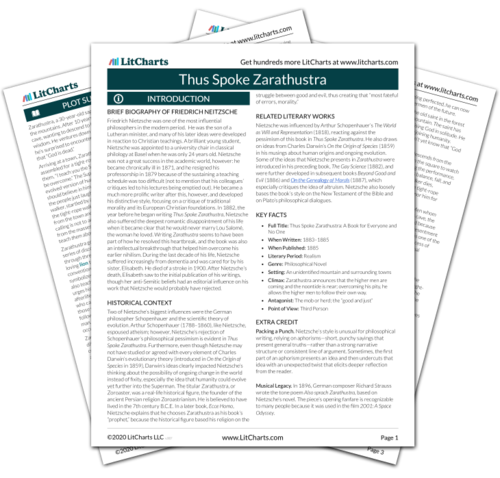 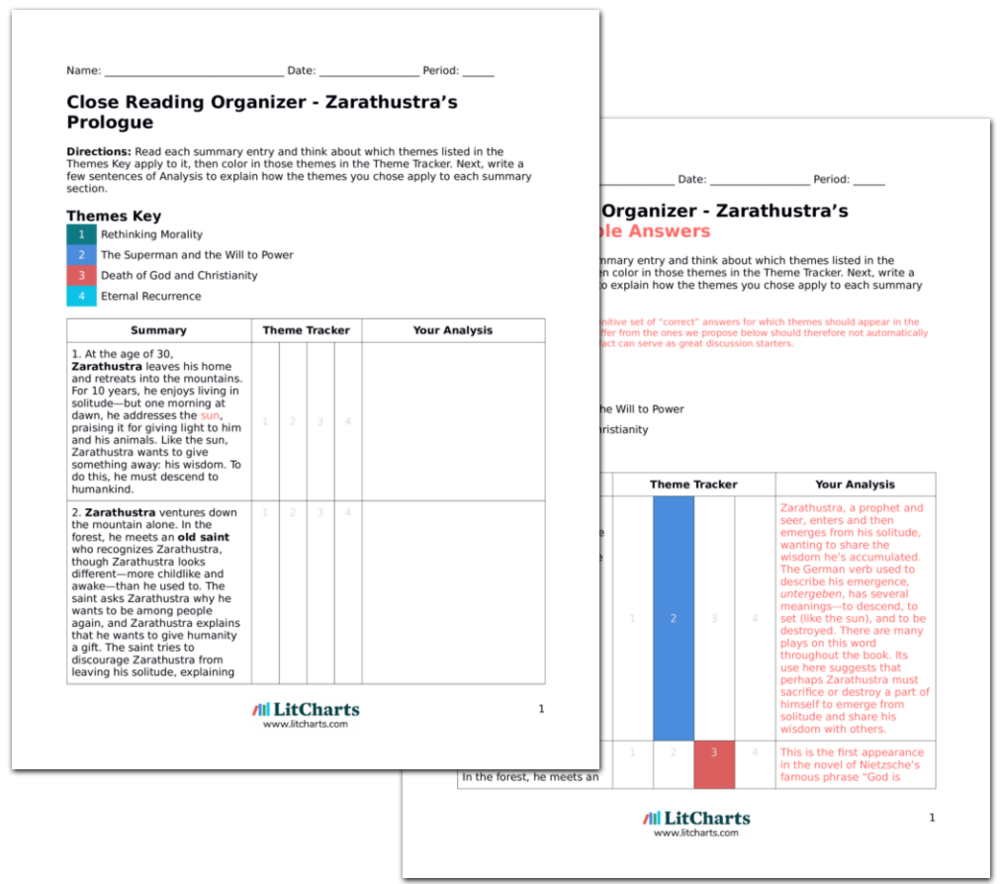