Download this LitChart! (PDF)
Teachers and parents! Struggling with distance learning? Our Teacher Edition on True Grit can help.

Welcome to the LitCharts study guide on Charles Portis's True Grit. Created by the original team behind SparkNotes, LitCharts are the world's best literature guides.

A concise biography of Charles Portis plus historical and literary context for True Grit.

A quick-reference summary: True Grit on a single page.

In-depth summary and analysis of every chapter of True Grit. Visual theme-tracking, too.

Explanations of True Grit's symbols, and tracking of where they appear.

An interactive data visualization of True Grit's plot and themes.

After spending his childhood in a handful of different towns in Arkansas, Charles Portis graduated from high school and became a Marine. Fighting as a sergeant in the Korean War, he was discharged in 1955, at which point he attended the University of Arkansas and studied journalism. After college, Portis made money as a reporter for publications in Tennessee and Arkansas before starting to work for the New York Herald-Tribune, which employed him as the paper’s bureau chief in London. However, he returned to Arkansas after only a short period, wanting to focus exclusively on writing fiction. In 1966, he published his first novel, Norwood, which received somewhat mixed but generally positive reviews. Two years later, he published True Grit, which was widely popular. After the success of True Grit, Portis didn’t publish another novel until 1979, when he put out The Dog of the South, followed by Masters of Atlantis in 1985 and Gringos in 1991. He has not published a new novel since then.
Get the entire True Grit LitChart as a printable PDF.
"My students can't get enough of your charts and their results have gone through the roof." -Graham S.
Download 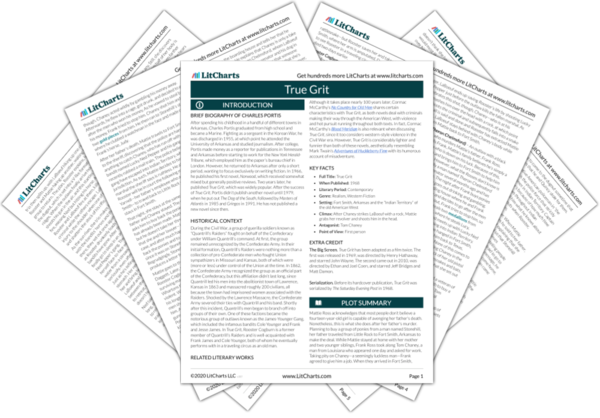 During the Civil War, a group of guerilla soldiers known as “Quantrill’s Raiders” fought on behalf of the Confederacy under William Quantrill’s command. At first, the group remained unrecognized by the Confederate Army. In their initial formation, Quantrill’s Raiders were nothing more than a collection of pro-Confederate men who fought Union sympathizers in Missouri and Kansas, both of which were (more or less) under control of the Union at the time. In 1862, the Confederate Army recognized the group as an official part of the Confederacy, but this affiliation didn’t last long, since Quantrill led his men into the abolitionist town of Lawrence, Kansas in 1863 and massacred roughly 200 civilians, all because the town had imprisoned women associated with the Raiders. Shocked by the Lawrence Massacre, the Confederate Army severed their ties with Quantrill and his band. Shortly after this incident, Quantrill’s men began to branch off into groups of their own. One of these factions became the notorious group of outlaws known as the James-Younger Gang, which included the infamous bandits Cole Younger and Frank and Jesse James. In True Grit, Rooster Cogburn is a former member of Quantrill’s Raiders and is well-acquainted with Frank James and Cole Younger, both of whom he eventually performs with in a traveling circus as an old man.

Other Books Related to True Grit

Although it takes place nearly 100 years later, Cormac McCarthy’s No Country for Old Men shares certain characteristics with True Grit, as both novels deal with criminals making their way through the American West, with violence and hot pursuit running throughout both texts. In fact, Cormac McCarthy’s Blood Meridian is also relevant when discussing True Grit, since it too considers western-style violence in the Civil War era. However, True Grit is considerably lighter and funnier than both of these novels, aesthetically resembling Mark Twain’s Adventures of Huckleberry Finn with its humorous account of misadventure.
Key Facts about True Grit

Serialization. Before its hardcover publication, True Grit was serialized by The Saturday Evening Post in 1968. 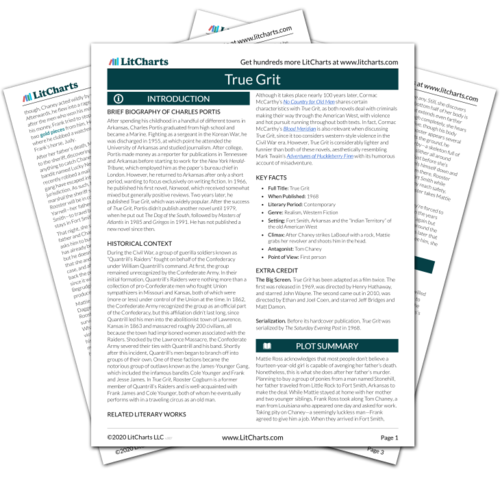 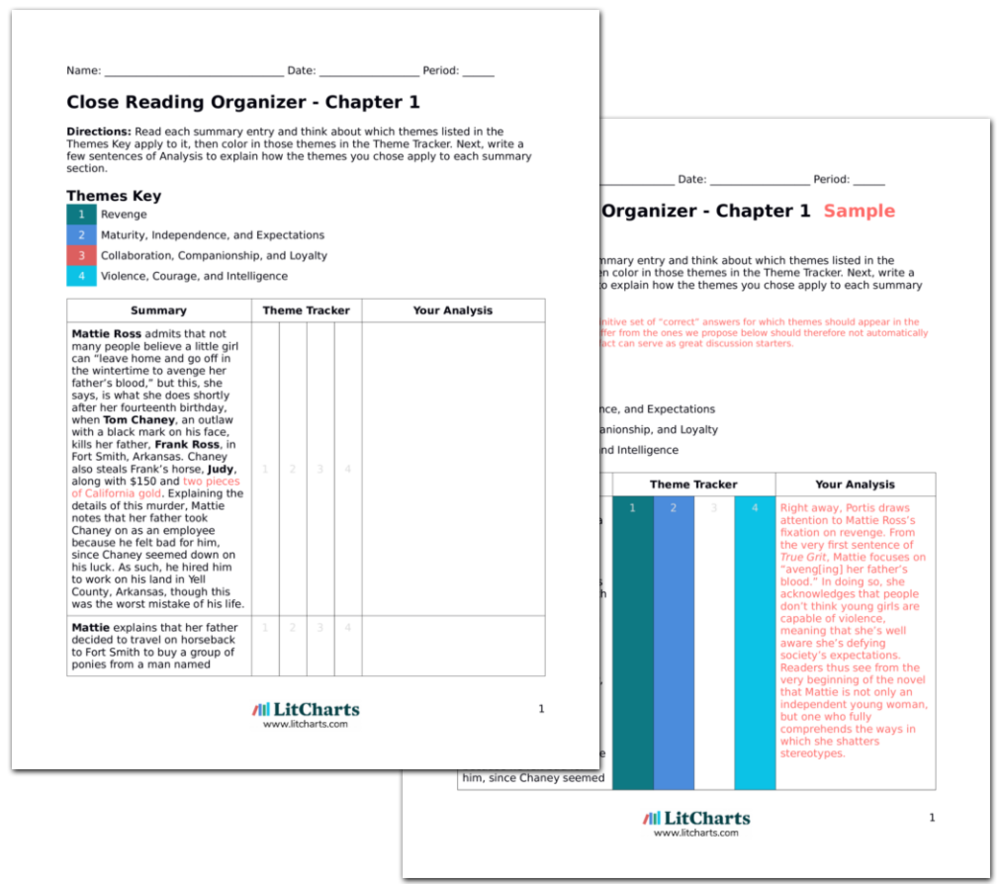