Download this LitChart! (PDF)
Teachers and parents! Struggling with distance learning? Our Teacher Edition on Twilight can help.

Welcome to the LitCharts study guide on Stephenie Meyer's Twilight. Created by the original team behind SparkNotes, LitCharts are the world's best literature guides.

A concise biography of Stephenie Meyer plus historical and literary context for Twilight.

A quick-reference summary: Twilight on a single page.

In-depth summary and analysis of every chapter of Twilight. Visual theme-tracking, too.

Explanations of Twilight's symbols, and tracking of where they appear.

An interactive data visualization of Twilight's plot and themes.

Stephenie Meyer is the second of six children. Though she was born in Connecticut, she grew up in Phoenix, Arizona and attended Brigham Young University on a National Merit Scholarship. While in college, she married her childhood sweetheart. After spending almost a decade as a stay-at-home parent to her three sons, Meyer woke up from a dream that inspired—and ultimately became—chapter 13 of Twilight. She wrote the rest of the novel in about three months, sold Twilight a few months later in a three-book deal for $750,000, and upon the book’s publication two years later, Meyer became an overnight celebrity. She went on to publish three more books in the Twilight series, an accompanying novella, and eventually, Midnight Sun, which retells the story in Twilight from Edward’s perspective. Meyer was also heavily involved in producing the five movies adapted from her novels. The Twilight series is deeply influenced by Meyer’s Mormon faith and her love of classic English literature.
Get the entire Twilight LitChart as a printable PDF.
"My students can't get enough of your charts and their results have gone through the roof." -Graham S.
Download 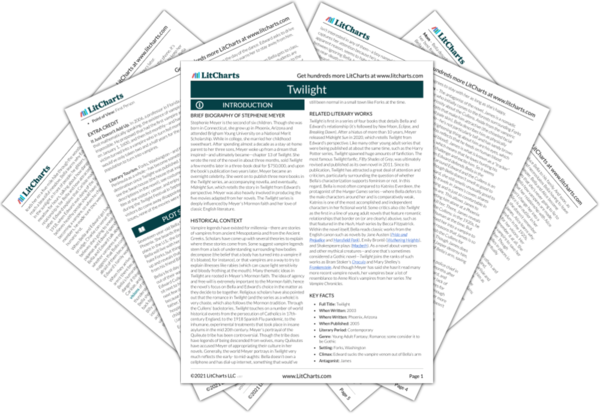 Vampire legends have existed for millennia—there are stories of vampires from ancient Mesopotamia and from the Ancient Greeks. Scholars have come up with several theories to explain where these stories come from. Some suggest vampire legends stem from a lack of understanding surrounding how bodies decompose (the belief that a body has turned into a vampire if it’s bloated, for instance), or that vampires are a way to try to explain illnesses like rabies (which can cause light sensitivity and bloody frothing at the mouth). Many thematic ideas in Twilight are rooted in Meyer’s Mormon faith. The idea of agency and free will is extremely important to the Mormon faith, hence the novel’s focus on Bella and Edward’s choice in the matter as they decide to be together. Religious scholars have also pointed out that the romance in Twilight (and the series as a whole) is very chaste, which also follows the Mormon tradition. Through the Cullens’ backstories, Twilight touches on a number of world historical events from the persecution of Catholics in 17th-century England, to the 1918 Spanish Flu pandemic, to the inhumane, experimental treatments that took place in insane asylums in the mid 20th century. Meyer’s portrayal of the Quileute tribe has been controversial. Though the tribe does have legends of being descended from wolves, many Quileutes have accused Meyer of appropriating their culture in her novels. Generally, the world Meyer portrays in Twilight very much reflects the early- to mid-aughts: Bella doesn’t own a cellphone and has dial-up internet, something that would’ve still been normal in a small town like Forks at the time.

Other Books Related to Twilight

Twilight is first in a series of four books that details Bella and Edward’s relationship (it’s followed by New Moon, Eclipse, and Breaking Dawn). After a hiatus of more than 10 years, Meyer released Midnight Sun in 2020, which retells Twilight from Edward’s perspective. Like many other young adult series that were being published at about the same time, such as the Harry Potter series, Twilight spawned huge amounts of fanfiction. The most famous Twilight fanfic, Fifty Shades of Grey, was ultimately revised and published as its own novel in 2011. Since its publication, Twilight has attracted a great deal of attention and criticism, particularly surrounding the question of whether Bella’s characterization supports feminism or not. In this regard, Bella is most often compared to Katniss Everdeen, the protagonist of the Hunger Games series—where Bella defers to the male characters around her and is comparatively weak, Katniss is one of the most accomplished and independent characters in her fictional world. Some critics also cite Twilight as the first in a line of young adult novels that feature romantic relationships that border on (or are clearly) abusive, such as that featured in the Hush, Hush series by Becca Fitzpatrick. Within the novel itself, Bella reads classic works from the English canon such as novels by Jane Austen (Pride and Prejudice and Mansfield Park), Emily Brontë (Wuthering Heights), and Shakespeare plays (Macbeth). As a novel about vampires and other mythical creatures—and one that’s sometimes considered a Gothic novel—Twilight joins the ranks of such works as Bram Stoker’s Dracula and Mary Shelley’s Frankenstein. And though Meyer has said she hasn’t read many more recent vampire novels, her vampires bear a lot of resemblance to Anne Rice’s vampires from her series The Vampire Chronicles.
Key Facts about Twilight

It Just Doesn’t Add Up. In 2006, a professor in Florida argued that mathematically speaking, the existence of vampires is impossible. He proposed that had the first vampire appeared on January 1, 1600, and then fed monthly—and had every victim turned into a vampire who in turn fed monthly—it would’ve only taken two and a half years for the entire world population to turn into vampires.

Literary Tourism. Forks, Washington—and the Olympic Peninsula as a whole—has become something of a tourist destination since Twilight was published. In Forks, visitors can see the Swan house (the house that inspired Meyer’s descriptions in the novel), see costumes and props from the film at the visitors’ center, and enjoy Twilight-themed events during the Twilight Festival in September. However, some visitors do come away disappointed as, due to permitting issues, none of the movies were filmed in Forks. 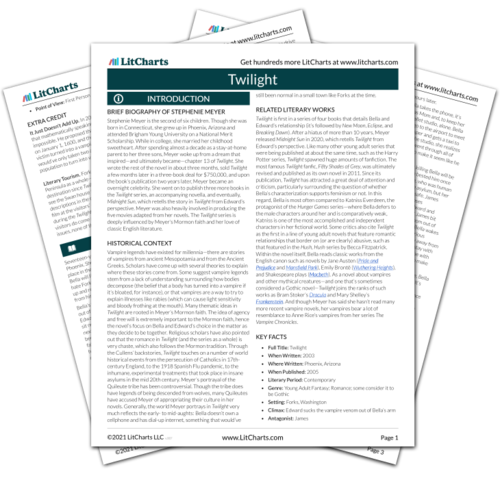 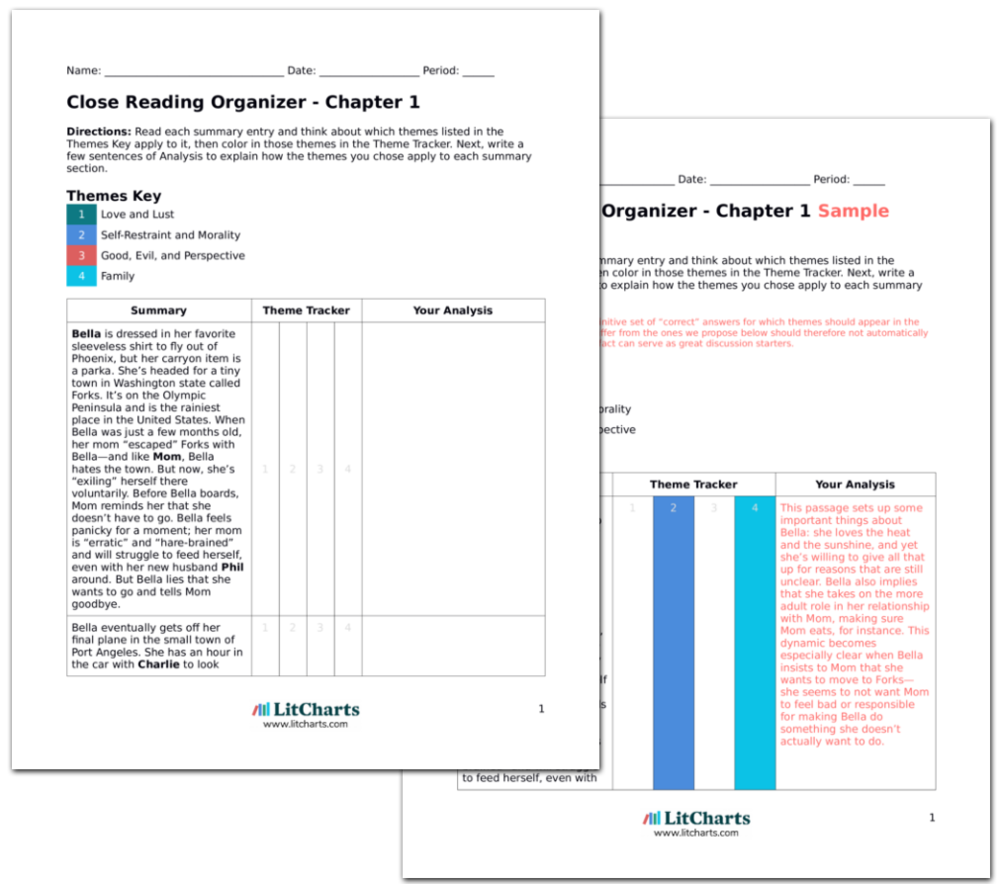