Download this LitChart! (PDF)
Teachers and parents! Struggling with distance learning? Our Teacher Edition on We Were Liars can help.

Get LitCharts A+
LitCharts assigns a color and icon to each theme in We Were Liars, which you can use to track the themes throughout the work.

In We Were Liars, the Sinclair family is obsessed with keeping up appearances, which is manifested in a clan-like mentality that breeds racism and bigotry. The novel suggests that this focus on appearances is inherently exclusionary, and that the traditional image of old, powerful New England families belies dangerous beliefs about ethnic and cultural superiority. In particular, Harris’s need to keep up appearances only serves to hurt those he loves, including his own children and grandchildren. Like a king trying to preserve his rule, Harris rails against the changing demographics of world around him and holds on more tightly to a traditional image of the all-American family—a practice the novel asserts is outdated and doomed to fail.

We Were Liars presents the Sinclairs as the epitome of the perfect American family. Throughout Cady’s narrative, however, she reveals the cultural superiority and eurocentrism that this family image is built upon. Harris Sinclair is constantly reminiscing about past events and re-casting them in a more positive light, making his family life seem quaint while failing to recognize the iniquities at the base of his fortune. As he shows Cady his ivory mementos from a trip to China, for example, she reminds Harris that it is illegal to buy ivory, but he just shrugs her off, noting that despite being illegal, “you can get it.” He refuses to let his memories of his trip to China with his late wife, Tipper, be marred by the seedy realities of the ivory trade. Likewise, he lectures his grandchildren on the value of hard work, noting, “We work for what we want, and we get ahead. We never take no for answer, and we deserve the rewards of our perseverance.” In this way, his vision of his own wealth denies the possibility of exploitation or historical imbalance, as he believes his fortune is solely due to hard work and traditional values. Harris further constructs his self-image through his use of mottos. Harris is able to use these mottos to gloss over details that do not fit into his vision of the world. Cady notes that she once saw his mottos as a bold and ambitious way of living, but upon recalling his story about his trip to China, her perspective on her grandfather changes. His motto “don’t take no for an answer” suddenly seems more like “the attitude of a privileged guy who didn’t care who got hurt,” which no longer impresses her the way it once did.

Harris’s pride in his family lineage also reveals a sense of racial purity that is highly exclusionary, leading him to shun anyone or anything that is outside of his vision of the perfect family. Harris talks often about the values and traditions of the Sinclair family, and notes his disappointment in his daughters for not living up to his expectations. Specifically, he criticizes them for their failed marriages and what he describes as “broken homes,” suggesting that blended families threaten his sense of tradition and values. Much more sinister, however, is Harris’s latent racism and its effects on Ed and Gat, who are of Indian descent. Ed is Carrie’s boyfriend, but she refuses to marry him because she knows that she will lose her inheritance. Gat explains this to Cady, noting that Harris is a Democrat and voted for Obama, “but that doesn’t mean he’s comfortable having people of color in his beautiful family.” People of color would not fit into Harris’s image of the all-American family. While Harris welcomes Gat onto Beechwood in the summers, when he and Cady fall in love, Harris lets Gat know he is an outsider and not welcome within the family itself. Cady’s mother pressures her to stay away from Gat, and soon Gat is also asked to stop attending family dinners at Clairmont. The fact that the Liars—a younger generation of Sinclairs—rebel against this exclusionary tactic exposes Harris’s image of the perfect family as outdated and unrealistic.

There is a clear understanding among the rest of the family members that they must keep up this image—something Cady’s generation struggles with. During the summer after Cady’s accident, when she begins spending time alone trying to recuperate her memory, her mother scolds her for hiding out. She tells Cady that she expects her “at Clairmont for supper in an hour with a smile on your face for Granddad.” This family image explicitly excludes any hint of weakness, vulnerability, or mental illness.

In her attempts to come to terms with the dynamics of her family, Cady also creates a series of fairy tales for herself, in which the Sinclairs are royalty and her grandfather is the King. This portrayal of the Sinclairs as royalty is in line with Harris’s image of the family, and gives a universal, timeless air to their constant infighting over Harris’s affections and money. More importantly, however, these fairy tales are a good way for Cady to create emotional distance from the Sinclair family dynamics, and to examine some of the larger family issues in a more theoretical context. In each of Cady’s fairy tales, at least one member of the royal family is deeply unsatisfied in some way, or longs to escape the castle for a different life. For example, in one story, the most beloved daughter is in line to be queen, but soon finds that privilege may not be all it seemed, as she will be “stuck tending to a crazy old tyrant for the rest of her days.” In one of the most revealing stories, the King’s grandson—who is half human, half mouse—runs away, only to return to burn the place to the ground. Cady’s invented image of her family reinforces the idea that their image is based on exclusion—most of the stories involve the intrusion of someone “different” as the main source of conflict—and also suggests that a more inclusive attitude towards outsiders may change the family image somewhat but will bring greater happiness overall.

The ThemeTracker below shows where, and to what degree, the theme of Bigotry and Exclusion appears in each part of We Were Liars. Click or tap on any chapter to read its Summary & Analysis.
How often theme appears:
part length:
Part
Part 1: Welcome
1
Part 2: Vermont
2
Part 3: Summer Se...
3
Part 4: Look, a Fire
4.
Part 5: The Truth
5
Get the entire We Were Liars LitChart as a printable PDF.
"My students can't get enough of your charts and their results have gone through the roof." -Graham S.
Download 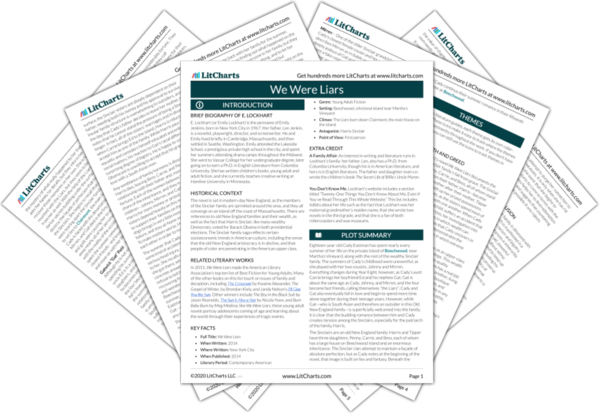 Bigotry and Exclusion Quotes in We Were Liars

Below you will find the important quotes in We Were Liars related to the theme of Bigotry and Exclusion.
Part 1: Welcome Quotes

“Your head. You could get hurt.”

“You feel like you know me, Cady, but you only know the me who comes here,” he says. “It’s—its just not the whole picture. You don’t know my bedroom with the window onto the airshaft, my mom’s curry, the guys from school, the way we celebrate holidays. You only know the me on this island, where everyone’s rich except me and the staff.”

Now, at the breakfast table, watching him eat my toast, “Don’t take no for an answer” seemed like the attitude of a privileged guy who didn’t care who got hurt, so long as his wife had the cute statues she wanted to display in her summerhouses.

Unlock with LitCharts A+
Part 4: Look, a Fire Quotes

“He knows he’s not supposed to be that guy. He’s a Democrat, he voted for Obama—but that doesn’t mean he’s comfortable having people of color in his beautiful family.” 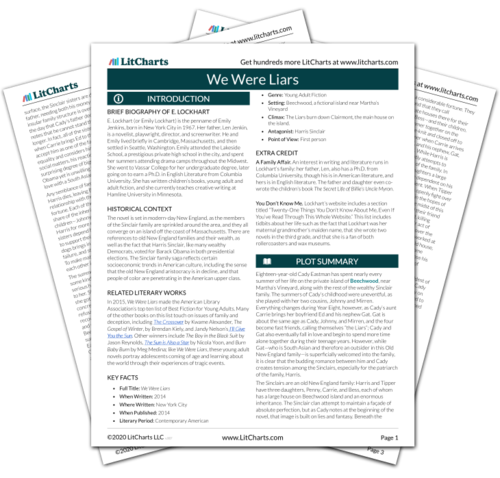 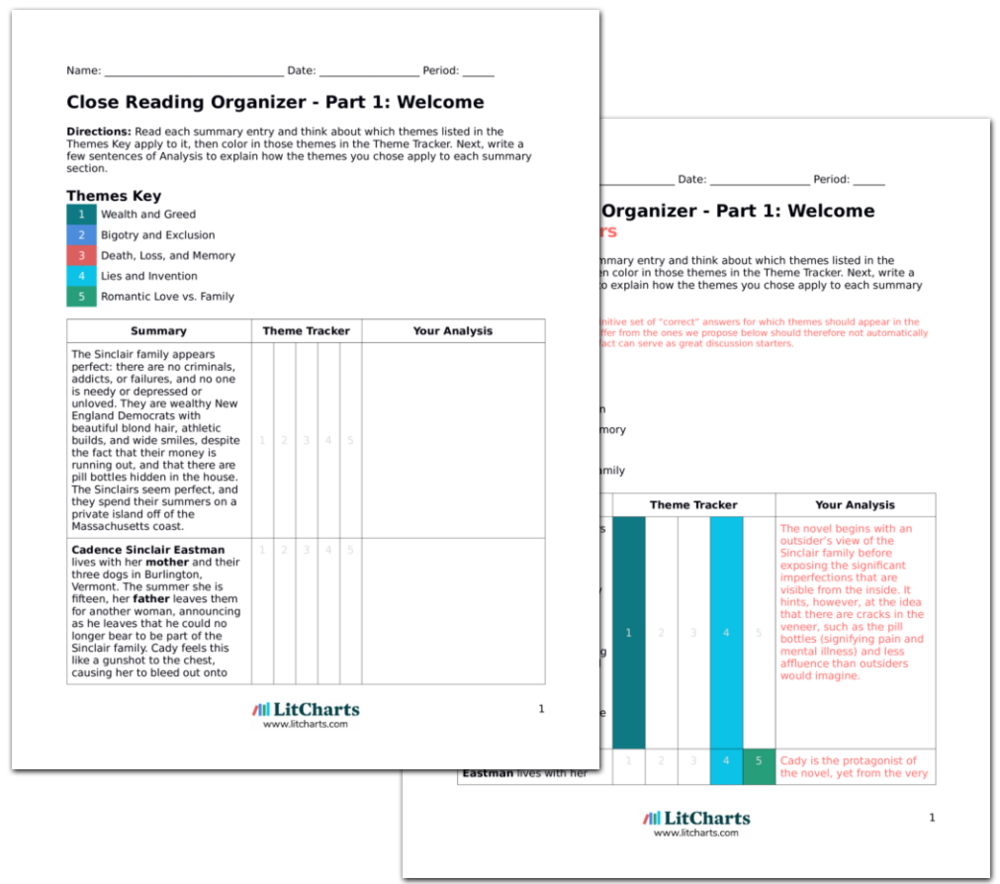