Download this LitChart! (PDF)
Teachers and parents! Struggling with distance learning? Our Teacher Edition on Where the Red Fern Grows can help.

Get LitCharts A+
LitCharts assigns a color and icon to each theme in Where the Red Fern Grows, which you can use to track the themes throughout the work.

Where the Red Fern Grows is a book with overt religious overtones. Set in the Ozarks in the 1930s, the novel focuses on a religious family, the Colmans, who believe not only in the legends and lore of their small mountain community but also in the power of prayer to transform one’s life. As Wilson Rawls investigates the role of religion and prayer in his characters’ lives, he ultimately suggests that faithful people are eager to make their realities accord with their belief systems—in other words, he suggests that it is his characters actions’, whether or not there is some kind of higher power watching over them, that allows them to see their prayers delivered.

While Rawls does recognize the importance of faith and he hints that a higher power may have some hand in the events of the novel, he also makes sure to ground his characters’ experiences with prayer in the mindsets they adopt, the patience they practice, and the actions they take in order to help make their realities reflect their innermost hopes. The first major instance in which one person’s prayer comes to shape their reality occurs early on in the book: after finding an advertisement for a kennel breeding hounds in Kentucky, Billy drops to his knees and asks God to deliver to him the hound pups he wants so badly. Even after offering up this prayer, though, Billy realizes that just asking will not be enough: he will need to do his part to prove he is worthy of having his prayers answered. For years, Billy works to save the money he needs to buy the hounds—and when he finally has the amount he needs, he thinks to himself that God is responsible for giving him the “heart, courage, and determination” to work hard toward his dream. On his first trip out hunting with the hounds, Billy thinks to himself: “This is what I [have] prayed for, worked and sweated for.” Through Billy’s experience, Rawls shows his readers how people of faith use prayer to help their realties reflect their innermost beliefs: that a higher power is guiding and helping them. Billy never credits God fully with having gotten him his dogs—but he does acknowledge that his belief that God enabled him to find reserves of strength and grit that he might not have been able to summon otherwise.

Another major instance in which a character’s reality comes to reflect their prayers happens about midway through the book on the tail end of a long, tiring raccoon hunt ending in Dan and Ann “treeing” (or chasing up into a tree) a large raccoon. Billy, who has promised to never to let his dogs tree a raccoon without stepping in himself to finish the job, gets to work chopping down the enormous tree. After Billy has spent days trying to fell the giant sycamore, he falls to his knees in exhaustion and he prays for God to “give [him] the strength to finish the job.” Just then, a wind rises up and blows the big sycamore over. Billy later asks his father if he thinks God “heard [his] prayer” and helped him, and his father answers that Billy must decide that for himself. Billy quietly decides on his own that God did intervene. This instance blurs the line between the idea of prayer as a tool of faith and self-motivation and prayer as a direct method of communication with a higher power. The wind is unlikely and perfectly timed—and yet it cannot be ignored that perhaps all of Billy’s hard work on the sycamore made it susceptible to falling over at even the slightest touch. Rawls uses this incident to further examine the ways in which people of faith use prayer to deepen their perceptions of how their realities align with their belief systems.

Toward the end of the novel, after Little Ann and Old Dan have died, Billy’s parents confess to him that they’ve long been praying that their family would be able to stay together after the two of them saved up enough money to move out of the hills and into town—but they fretted that Billy would want to stay behind with his dogs. Billy’s parents declare that while the loss of the dogs is devastating, their own prayers have, in a way, been answered: the dogs kept Billy safe as long as they needed to, and now the whole family can still stay together. “I know what you’re going through and how it hurts,” Billy’s father tells him after the dogs both die, “but there’s always an answer. The Good Lord has a reason for everything He does.” This ethos, while not exactly a prayer, embodies Billy’s parents’ desire to see the world around them reflect the faith and ideology they cling to in difficult times. Wilson Rawls’s characters hold a worldview in which their experience of reality reflects the will of that higher power. Whether or not the dogs did actually die for any “reason,” the Colmans decide that the reason was God’s will to keep their family together—and this belief allows all of them to feel the blow of the beloved hounds’ loss softened just a bit.

Ultimately, Wilson Rawls uses the theme of faith and prayer to argue that while faith and trust in a higher power are important parts of many religious peoples’ lives, the actions of the faithful, too, have significant bearing on the ways in which they see their prayers answered. Through a combination of grace, openness, patience, and action, many of the characters in Where the Red Fern Grows find their most sacred prayers answered. Though Rawls purposefully leaves several instances of answered prayers ambiguous, allowing for the possibility that there is indeed a higher power, he ultimately points to the correlation between faith and action as the means by which most prayers are answered. 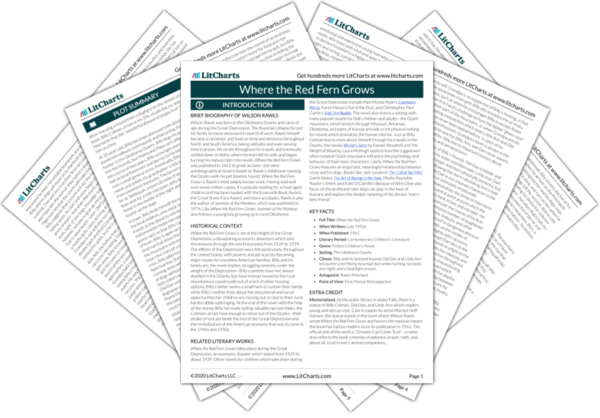 Faith and Prayer Quotes in Where the Red Fern Grows

Below you will find the important quotes in Where the Red Fern Grows related to the theme of Faith and Prayer.
Chapter 3 Quotes

I remembered a passage from the Bible my mother had read to us: "God helps those who help themselves." I thought of the words. I mulled them over in my mind. I decided I'd ask God to help me. There on the bank of the Illinois River, in the cool shade of the tall white sycamores, I asked God to help me get two hound pups. It wasn't much of a prayer, but it did come right from the heart.

Lying back in the soft hay, I folded my hands behind my head, closed my eyes, and let my mind wander back over the two long years. I thought of the fishermen, the blackberry patches, and the huckleberry hills. I thought of the prayer I had said when I asked God to help me get two hound pups. I knew He had surely helped, for He had given me the heart, courage, and determination.

I was expecting one of them to bawl, but when it came it startled me. The deep tones of Old Dan's voice jarred the silence around me. […] A strange feeling came over me. […] This was what I had prayed for, worked and sweated for, my own little hounds bawling on the trail of a river coon. I don't know why I cried, but I did.

Kneeling down between my dogs, I cried and prayed. “Please God, give me the strength to finish the job. […] Please help me finish the job." I was trying to rewrap my hands so I could go back to work when I heard a low droning sound. […] I looked up. High in the top of the big sycamore a breeze had started the limbs to swaying. A shudder ran through the huge trunk. […]

It started popping and snapping. I knew it was going to fall. […]

I held my breath. The top of the big sycamore rocked and swayed.

I opened my mouth to call Old Dan. I wanted to tell him to come on and we'd go home as there was nothing we could do. The words just wouldn't come out. I couldn't utter a sound. I lay my face against the icy cold bark of the sycamore. I thought of the prayer I had said when I had asked God to help me get two hound pups. I knelt down and sobbed out a prayer. I asked for a miracle which would save the life of my little dog. I promised all the things that a young boy could if only He would help me.

"What I can't understand is why they stayed with the tree," Mr. Benson said. […]

“Men,” said Mr. Kyle, "people have been trying to understand dogs ever since the beginning of time. […] You can read every day where a dog saved the life of a drowning child, or lay down his life for his master. Some people call this loyalty. I don't. I may be wrong, but I call it love… […] It's a shame that people all over the world can't have that kind of love in their hearts… […] There would be no wars, slaughter, or murder; no greed or selfishness. It would be the kind of world that God wants us to have.”

'Don't touch it, Mama," my oldest sister whispered. "It was planted by an angel."

Mama smiled and asked, "Have you heard the legend?"

'Yes, Mama," my sister said. “Grandma told me the story and I believe it, too."

With a serious look on his face, Papa said, "These hills are full of legends. Up until now I've never paid much attention to them, but now I don't know. Perhaps there is something to the legend of the red fern. Maybe this is God's way of helping Billy understand why his dogs died."

I have never been back to the Ozarks. All I have left are my dreams and memories, but if God is willing, some day I'd like to go back-back to those beautiful hills. I'd like to walk again on trails I walked in my boyhood days.

[…] I'm sure the red fern has grown and has completely covered the two little mounds. I know it is still there, hiding its secret beneath those long, red leaves, but it wouldn't be hidden from me for part of my life is buried there, too. 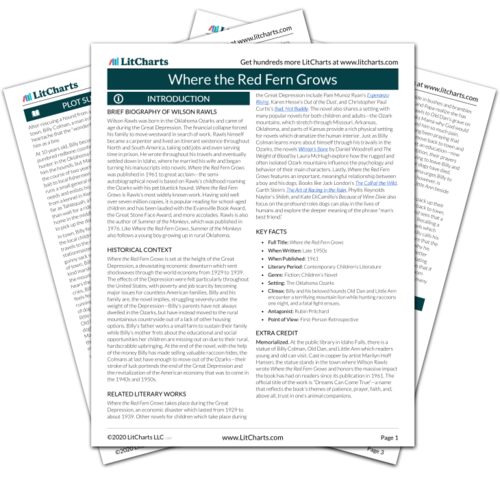 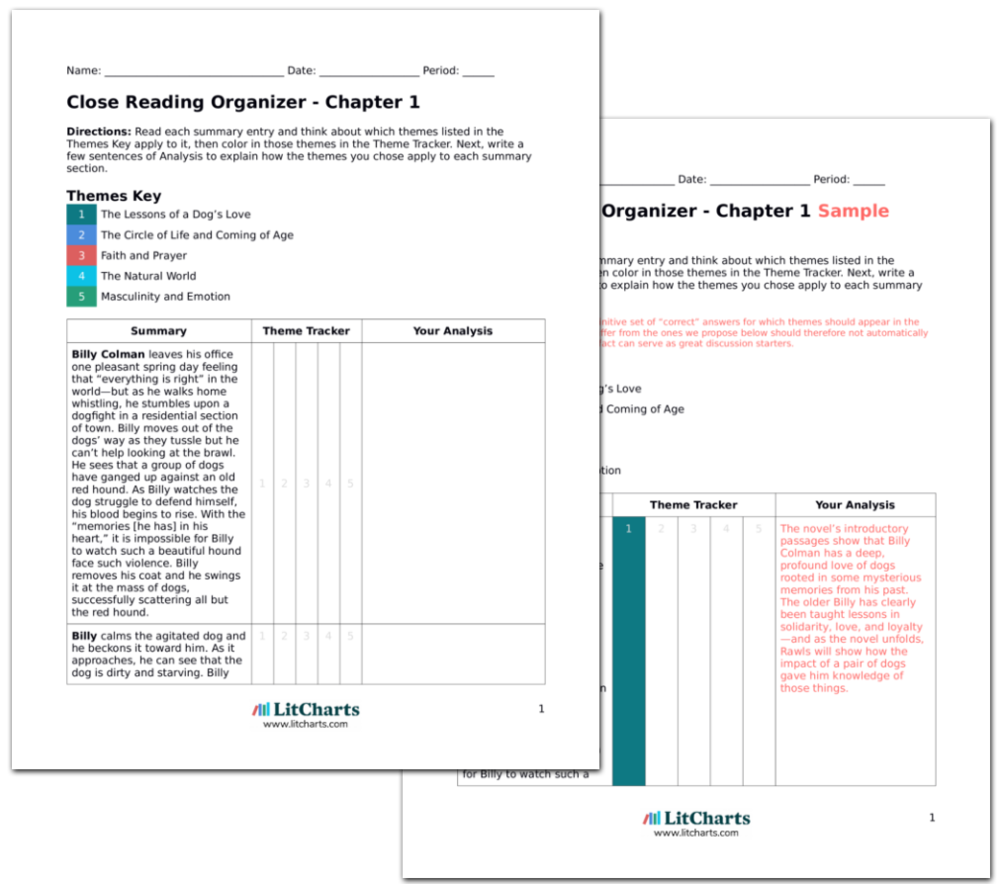