Download this LitChart! (PDF)
Teachers and parents! Struggling with distance learning? Our Teacher Edition on White Teeth can help.

Welcome to the LitCharts study guide on Zadie Smith's White Teeth. Created by the original team behind SparkNotes, LitCharts are the world's best literature guides.

A concise biography of Zadie Smith plus historical and literary context for White Teeth.

A quick-reference summary: White Teeth on a single page.

In-depth summary and analysis of every chapter of White Teeth. Visual theme-tracking, too.

Explanations of White Teeth's symbols, and tracking of where they appear.

An interactive data visualization of White Teeth's plot and themes.

Zadie Smith was born in Willesden, London, the daughter of a Jamaican mother and an English father. Smith studied English literature at King’s College, Cambridge, and wrote White Teeth, her debut novel, during her final exams at Cambridge. Her other novels include On Beauty (2005), Swing Time (2016), Feel Free (2018), and NW (2012), which, like White Teeth, is set in Northwest London. In addition to contributing to The New York Review of Books and Harper’s Magazine, Smith has taught writing at Columbia University and New York University. She has received the James Tait Black Memorial Prize, the Orange Prize for Fiction, the Langston Hughes Medal, and the Anisfield-Wolf Book Award.
Get the entire White Teeth LitChart as a printable PDF.
"My students can't get enough of your charts and their results have gone through the roof." -Graham S.
Download 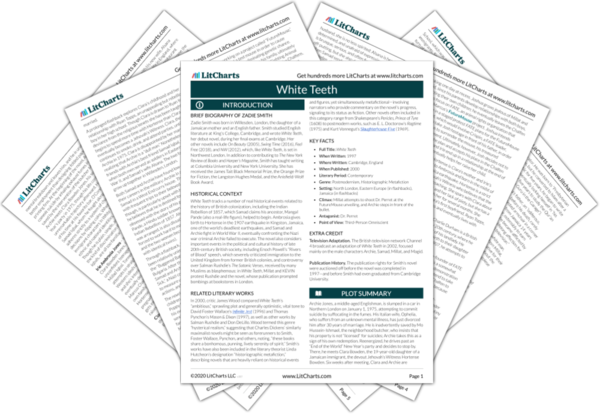 White Teeth tracks a number of real historical events related to the history of British colonization, including the Indian Rebellion of 1857, which Samad claims his ancestor, Mangal Pande (also a real-life figure), helped to begin. Ambrosia gives birth to Hortense in the 1907 earthquake in Kingston, Jamaica, one of the world’s deadliest earthquakes, and Samad and Archie fight in World War II, eventually confronting the Nazi war criminal Archie failed to execute. The novel also considers important events in the political and cultural history of late 20th-century British society, including Enoch Powell’s “Rivers of Blood” speech, which severely criticized immigration to the United Kingdom from former British colonies, and controversy over Salman Rushdie’s The Satanic Verses, received by many Muslims as blasphemous: in White Teeth, Millat and KEVIN protest Rushdie and the novel, whose publication prompted bombings at bookstores in London.

Other Books Related to White Teeth

In 2000, critic James Wood compared White Teeth’s “ambitious,” sprawling plot and generally optimistic, vital tone to David Foster Wallace’s Infinite Jest (1996) and Thomas Pynchon’s Mason & Dixon (1997), as well as other works by Salman Rushdie and Don DeLillo. Wood termed this genre “hysterical realism,” suggesting that Charles Dickens’ similarly maximalist novels might be seen as forerunners to Smith, Foster Wallace, Pynchon, and others, noting, “these books share a bonhomous, punning, lively serenity of spirit.” Smith’s works have also been included in the literary theorist Linda Hutcheon’s designation “historiographic metafiction,” describing novels that are heavily reliant on historical events and figures, yet simultaneously metafictional—involving narrators who provide commentary on the novel’s progress, signaling to its status as fiction. Other novels often included in this category range from Shakespeare’s Pericles, Prince of Tyre (1608) to postmodern works, such as E. L. Doctorow’s Ragtime (1975) and Kurt Vonnegut’s Slaughterhouse-Five (1969).
Key Facts about White Teeth

Publication History. The publication rights for Smith’s novel were auctioned off before the novel was completed in 1997—and before Smith had even graduated from Cambridge University. 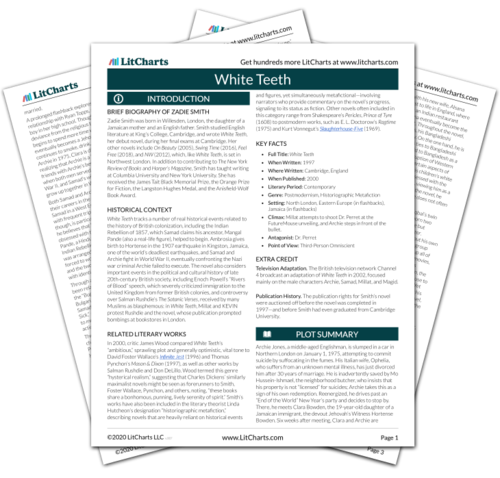 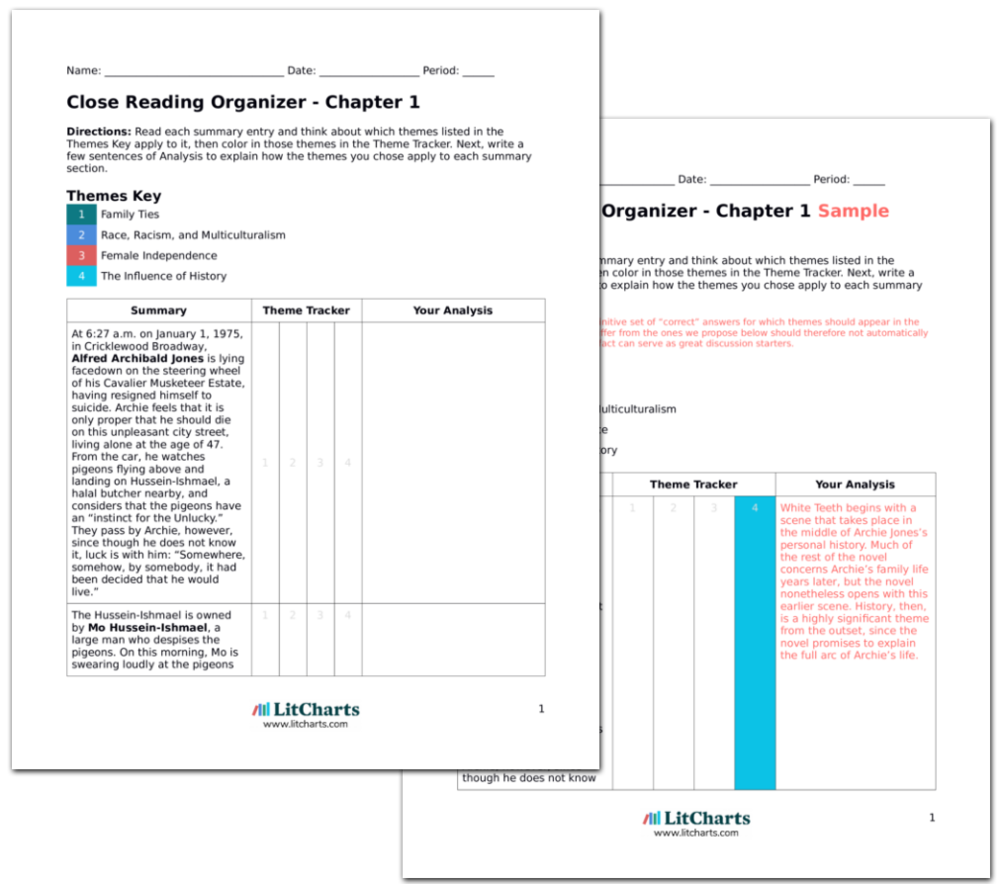