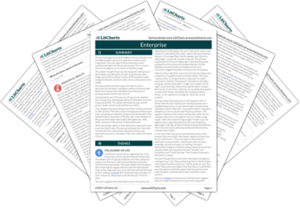 "Enterprise" was written by the Indian poet Nissim Ezekiel and published in his 1960 collection The Unfinished Man. The poem follows a group of people on a "pilgrimage" whose long trek begins with a strong sense of purpose but ends in devastation and disillusionment. The pilgrims, who come across as idealistic yet somewhat naive and ill-prepared, get so beaten down by their journey that, once they reach their destination, they don't even remember why they're there. The poem has been read as an allegory for a number of things (including the journey of life itself, India's emergence from the grip of colonial rule, and the flaws of organized religion). Above all, it speaks to the way that idealism can falter in the face of reality, the divisive nature of pride, and the value of focusing on the journey rather than the destination. 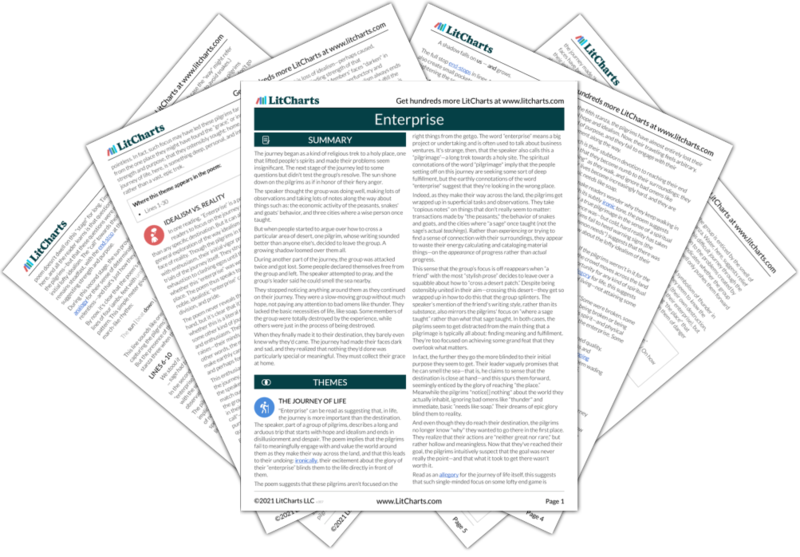 Get the entire guide to “Enterprise” as a printable PDF.
Download

The Full Text of “Enterprise”

The Full Text of “Enterprise”

1It started as a pilgrimage

2Exalting minds and making all

3The burdens light. The second stage

4Explored but did not test the call.

5The sun beat down to match our rage.

6We stood it very well, I thought,

7Observed and put down copious notes

8On things the peasants sold and bought,

9The way of serpents and of goats,

10Three cities where a sage had taught.

11But when the differences arose

12On how to cross a desert patch,

13We lost a friend whose stylish prose

14Was quite the best of all our batch.

16Another phase was reached when we

17Were twice attacked, and lost our way.

18A section claimed its liberty

19To leave the group. I tried to pray.

20Our leader said he smelt the sea.

21We noticed nothing as we went,

22A straggling crowd of little hope,

23Ignoring what the thunder meant,

25Some were broken, some merely bent.

26When, finally, we reached the place,

27We hardly knew why we were there.

28The trip had darkened every face,

29Our deeds were neither great nor rare.

30Home is where we have to gather grace.