What is an allegory? Here’s a quick and simple definition:

Some additional key details about allegory:

Here's how to pronounce allegory: al-ih-gore-ee

Allegory and symbolism are often confused, but they are not the same thing.

So, to put it another way: an allegory is a type of work or story that represents some idea, concept, or historical event that is different from the literal events contained within the story. Symbolism is the technique that an allegory uses in order to be able to represent and communicate its deeper meaning.

How Allegories Use Symbolism

Allegories use symbolism in all sorts of ways. While the types of symbols in allegories are so varied that it's not possible to categorize them all, it is possible to group them into two broad categories. Characters, events, locations, and objects in allegories usually symbolize:

Although the symbolism in some allegories can be quite subtle, it's more often the case that the symbolism is clear or even heavy-handed. For example, Mr. Legality, who symbolizes a mindset focused around the law, is named Mr. Legality! Similarly, in Geoffrey Chaucer's House of Fame, Lady Fame is the name of a character who determines the social reputations of others.

Not All Symbolism is Allegory

While allegories do involve a lot of symbolism, the presence of symbolism in a work does not automatically make that work an allegory. Rather, an allegory is a story in which the majority of characters and plot developments serve as symbols for something else, or in which the entire storyline is symbolic of a broader concept, idea, historical event, or phenomenon in society. But a story or poem can contain symbols while not functioning as an allegory. An example might be helpful:

In short, all allegories are highly symbolic, but not all symbolic writing is allegorical.

There are two main types of allegory. The basic technique is the same in both categories, but in each kind characters and events symbolize different things.

It's certainly possible, and not uncommon, for a writer of an allegory to draw elements from both of these two types of allegory.

People often confuse allegories with parables—another, similar type of story that makes heavy use of symbolism to convey meaning. But in fact, the two terms mean quite different things. Here are some of the key differences between allegory and parable:

Allegory is one of the oldest literary forms, with writers long relying on allegory's ability to convey a moral or political message efficiently and discreetly.

Animal Farm is a political allegory. It tells the story of the animals on a farm owned by an abusive farmer. One night, a boar named Old Major gathers all the animals of the farm together. Knowing that he will soon die, Old Major gives a speech in which he reveals to the animals that men cause all the misery that animals endure. Old Major says that all animals are equal and urges them to join together to rebel. Old Major dies shortly thereafter, but the farm animals develop his ideas into the philosophy of Animalism, and they defeat the abusive farmer in an uprising, renaming the farm "Animal Farm." What follows is a long story of political turmoil among the animals, with the pigs rising to power and becoming oppressive rulers themselves, amending Old Major's revolutionary statement ("All animals are equal") to a nonsensical one that justifies their dominance ("All animals are equal, but some animals are more equal than others").

Animal Farm is an allegorical story about communism, the political ideology that promotes the eradication of class and the equality of all people. Old Major symbolizes the fathers of communism, Karl Marx and Vladmir Lenin, while the hypocritical ruling class of pigs represents the Soviet Government in the wake of the Russian Revolution. George Orwell likely chose to use an allegorical story to attack totalitarianism (rather than attacking it directly or explicitly) because it was such a sensitive political subject at the time that he wrote the book (1944-45).

In Book II of Paradise Lost, a character known as Sin describes how she gave birth to Death after she was impregnated by Satan (or the devil), who is her own father. Her story is allegorical because each character is highly symbolic, as are their relationships to one another. (For instance, in the Judeo-Christian tradition, death didn't even exist until Satan tempted the first humans to sin. In that sense, Satan gave rise to Sin, and together the two gave rise to Death.) In this passage, Milton describes Sin giving birth to Death:

At last this odious offspring whom thou seest
Thine own begotten, breaking violent way
Tore through my entrails, that with fear and pain
Distorted, all my nether shape thus grew
Transform'd: but he my inbred enemy
Forth issu'd, brandishing his fatal Dart
Made to destroy: I fled, and cry'd out Death;
Hell trembl'd at the hideous Name, and sigh'd
From all her Caves, and back resounded Death.

Some additional famous allegorical works of literature, and their symbolic meanings, are:

For thousands of years, philosophers have expressed their beliefs using allegories, particularly because allegorical narratives are handy for illustrating concepts that might otherwise be too abstract to explain easily.

Plato's "Allegory of the Cave" is a classic and well-known example of allegory. Consider the following lines, spoken by Socrates:

Imagine this: People live under the earth in a cavelike dwelling. Stretching a long way up toward the daylight is its entrance, toward which the entire cave is gathered. The people have been in this dwelling since childhood, shackled by the legs and neck..Thus they stay in the same place so that there is only one thing for them to look that: whatever they encounter in front of their faces. But because they are shackled, they are unable to turn their heads around.

It becomes apparent later in his dialogue that Socrates' imaginary prisoners are actually symbolic representations of the average person. The prisoners in his cave may perceive only what is dictated by their circumstances—for example, while in bondage, they cannot perceive the sun. Likewise, people cannot access certain information about the universe by relying on their senses alone. Thus, Plato posits the existence of a higher reality that can't be conceived of as long as people continue to believe that what they are capable of perceiving is all that is real.

There is a long tradition of allegorical movies that represent historical figures or moral qualities through a series of symbols.

Guillermo del Toro's 2006 dark fantasy film is set during the Spanish Civil War of the 1930s, and chronicles the journey of a girl named Ofelia into a fairy underworld she discovers near her home. In the haunting final scene, the young Ofelia refuses to harm an innocent person, even though it will cost her the kingdom she had been promised by a mythical fawn, and ultimately her life. Though none of the characters in the film are actual historical figures, they symbolize the opposing sides of the Spanish Civil War. If Ofelia is an allegorical figure for Spanish resistance to tyranny, her calculating stepfather (who is a captain on the side of the country's military dictator) represents Spanish officials' all-consuming pursuit of power and blind allegiance to the ideals of the dictatorship.

Why Do Writers Choose to Write Allegories? 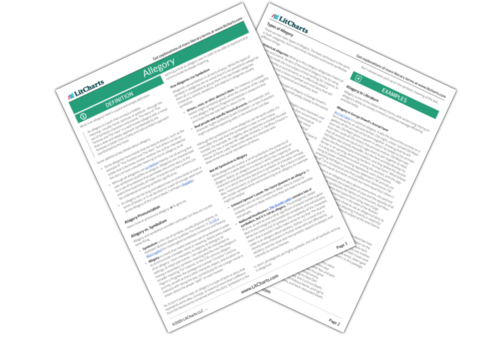