“A New England Nun” tells the story of Louisa Ellis, a woman engaged to be married to Joe Dagget but who feels ambivalent because she has loved living alone for the last fifteen years. The story opens on a peaceful afternoon, where Louisa, having just finished working at her needlepoint, goes outside to pick some currants, and then happily steeps herself tea. She fixes herself dinner, which she eats contentedly, and she goes outside to feed her dog, Caesar, who lives in the backyard. As evening sets in and she washes her dishes, she takes pleasure in listening to the frogs and toads croak outside her window.

Later that night, Joe Dagget comes to visit Louisa. Joe has been coming to see Louisa twice a week—she and Joe got engaged fifteen years ago, but Joe was across the world, in Australia, seeking his fortune for fourteen of those years. Joe’s presence inside Louisa’s house is instantly alarming—he has a heavy gait, a large, “masculine” manner, and he upsets Louisa’s little canary who begins to beat its wings against its cage. Louisa and Joe sit across from each other and have an awkward conversation, talking about the weather.

When Louisa asks after Joe’s mother, he mentions his mother’s caretaker Lily Dyer, and blushes. At one point, Joe picks up a stack of books and sets them down in the opposite order than he’d found them. Louisa gets up and sets the books back as they were, baffling Joe. On his way out of the door, he trips on a rug, knocks over the basket where Louisa keeps her needlework, and its contents spill everywhere. Louisa ushers Joe out of the house, assuring him that she’ll clean it up. Once outside, Joe is extremely relieved to no longer be in Louisa’s home—Louisa, inside, is similarly relieved to finally be alone again.

Louisa is dreading marrying Joe, terrified at the idea of giving up her home, her belongings, and her way of life. She is also very worried that Joe will let Caesar loose—the dog has spent the last fourteen years chained inside a hut in the backyard because, as a puppy, he bit a neighbor, and she worries about him roaming the town if he isn’t kept in the yard. However, despite her concerns, Louisa does not want to break the vow of engagement she made to Joe.

One night, as Louisa is enjoying a stroll under a full moon, she notices two other people just on the other side of the path. Unable to leave without disturbing them, she decides to wait in the shadows until they are gone. When they begin to speak, she realizes that it is Joe Dagget and Lily Dyer. Thinking they are alone, Joe and Lily confess their feelings for each other. But Lily says that she’ll be leaving town, because she would never expect Joe to break his promise to Louisa—in fact, if he did, she would no longer care for him. Lily at first appears curt, but she eventually softens, telling Joe that she’ll never marry because she could never feel this strongly for another man. Joe is devastated that Lily is leaving but he, too, agrees that the engagement vow is the most important thing and says that he would never abandon Louisa. The pair likely kisses (Louisa hears a “soft commotion”) before Lily says that she must go. Louisa is stunned by what she’s just heard.

The next day, after doing her housework and meditating by her window, Louisa welcomes Joe into her home. Diplomatically, without ever mentioning Lily Dyer, Louisa manages to break off their engagement, saying she simply can’t envision changing her life. Joe insists that if Louisa hadn’t broken the engagement, he would have married her, but he admits that he does think it’s better this way. They share a tender goodbye—with a warmth that they’d not shown each other in some time. That night, Louisa weeps a little. However, the next morning, she does her needlework with an air of perfect contentedness. Louisa feels like she is at once a “queen,” with total control over her domain, and a “nun,” allowed to live the rest of days out in peaceful solitude. 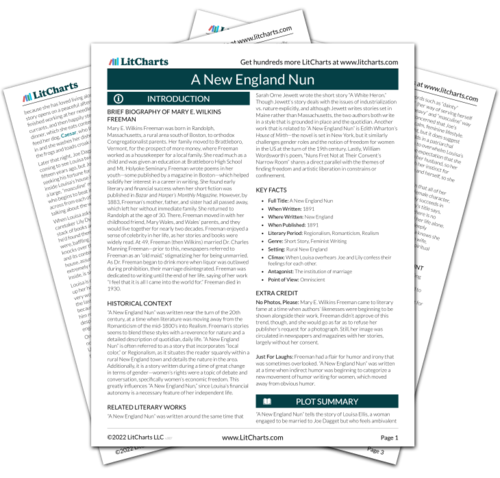 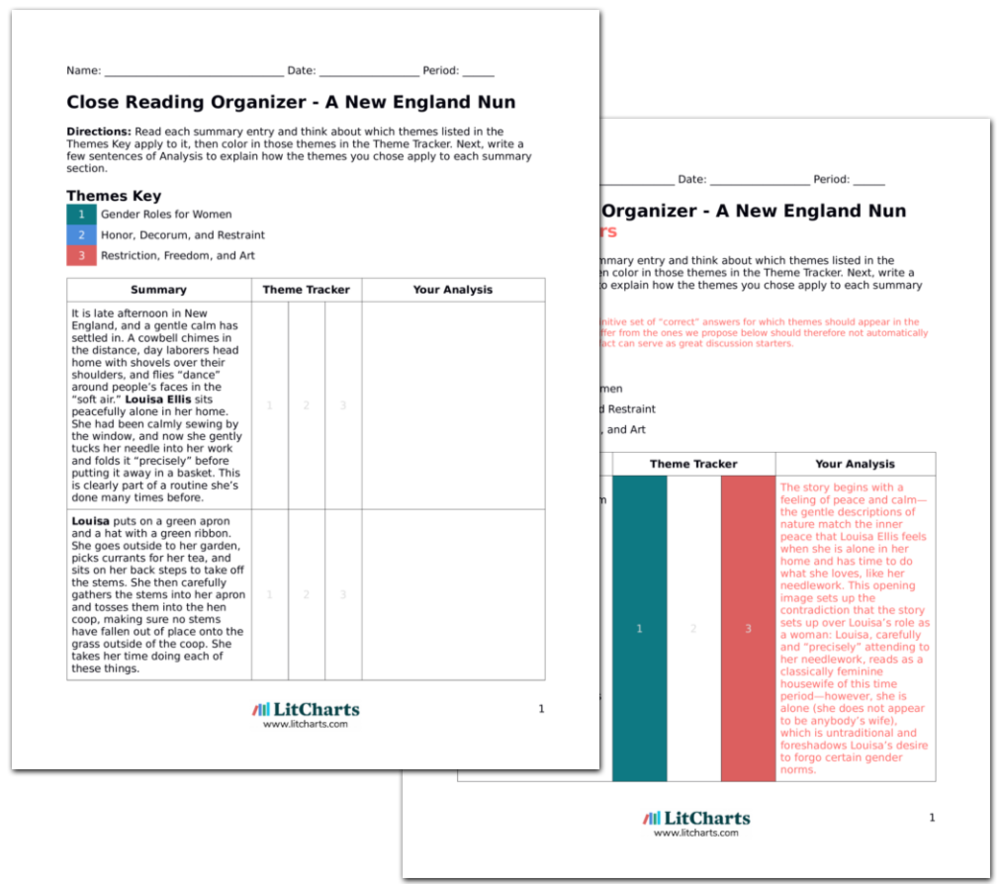