Download this LitChart! (PDF)
Teachers and parents! Struggling with distance learning? Our Teacher Edition on A Real Durwan can help.

Welcome to the LitCharts study guide on Jhumpa Lahiri's A Real Durwan. Created by the original team behind SparkNotes, LitCharts are the world's best literature guides.

A concise biography of Jhumpa Lahiri plus historical and literary context for A Real Durwan.

A quick-reference summary: A Real Durwan on a single page.

In-depth summary and analysis of every of A Real Durwan. Visual theme-tracking, too.

Explanations, analysis, and visualizations of A Real Durwan's themes.

A Real Durwan's important quotes, sortable by theme, character, or .

Description, analysis, and timelines for A Real Durwan's characters.

Description, analysis, and timelines for A Real Durwan's terms.

Explanations of A Real Durwan's symbols, and tracking of where they appear.

An interactive data visualization of A Real Durwan's plot and themes.

Born in London to the daughter of Bengali Indian immigrants, Lahiri was raised in U.S. from the age of two and considers herself an American. Growing up in Rhode Island, she felt pressure to be both “loyal to the old world” of her heritage and “fluent in the new.” Lahiri received her B.A. in English Literature from the Barnard College of Columbia University, and as well as two M.A. degrees, an M.F.A. degree, and a Ph.D. from Boston University. She has published short story collections and three novels, as well as several nonfiction pieces. She was awarded the Pulitzer Prize in 2000 for her short story collection, Interpreter of Maladies. Her first novel, The Namesake, was published in 2003 and adapted to a feature-length film in 2007. She followed it up with another short story collection in 2008, Unaccustomed Earth, and the 2013 novel, Lowland. Her literary works focus mostly on lives of immigrants or their children. They often explore intergenerational conflict in families as well as the tension she has personally experienced between the pressure to assimilate and the desire to keep one’s culture close and present. Lahiri is currently teaching writing at Princeton University.
Get the entire A Real Durwan LitChart as a printable PDF.
"My students can't get enough of your charts and their results have gone through the roof." -Graham S.
Download 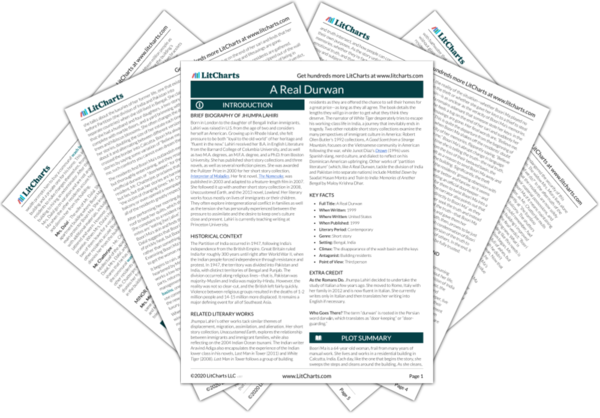 Historical Context of A Real Durwan

The Partition of India occurred in 1947, following India’s independence from the British Empire. Great Britain ruled India for roughly 300 years until right after World War II, when the Indian people forced independence through resistance and protest. In 1947, the territory was divided into Pakistan and India, with distinct territories of Bengal and Punjab. The division occurred along religious lines—that is, Pakistan was majority-Muslim and India was majority-Hindu. However, the reality was not so clear-cut, and the British left fairly quickly. Violence between religious groups resulted in the deaths of 1-2 million people and 14-15 million more displaced. It remains a major defining event for all of Southeast Asia.

Other Books Related to A Real Durwan

Jhumpa Lahiri’s other works tack similar themes of displacement, migration, assimilation, and alienation. Her short story collection, Unaccustomed Earth, explores the relationship between immigrants and immigrant families, while also reflecting on the 2004 Indian Ocean tsunami. The Indian writer Aravind Adiga also encapsulates the experience of the Indian lower class in his novels, Last Man in Tower (2011) and White Tiger (2008). Last Man in Tower follows a group of building residents as they are offered the chance to sell their homes for a great price—as long as they all agree. The book details the lengths they will go in order to get what they think they deserve. The narrator of White Tiger desperately tries to escape his working-class life in India, a journey that inevitably ends in tragedy. Two other notable short story collections examine the many perspectives of immigrant culture in America: Robert Olen Butler’s 1992 collections, A Good Scent from a Strange Mountain, focuses on the Vietnamese community in American following the war, while Junot Diaz’s Drown (1996) uses Spanish slang, nerd culture, and dialect to reflect on his Dominican American upbringing. Other works of “partition literature” (which, like A Real Durwan, tackle the division of India and Pakistan into separate nations) include Mottled Dawn by Saadat Hasan Monto and Train to India: Memories of Another Bengal by Maloy Krishna Dhar.
Key Facts about A Real Durwan

Extra Credit for A Real Durwan

As the Romans Do. Jhumpa Lahiri decided to undertake the study of Italian a few years ago. She moved to Rome, Italy with her family in 2012 and is now fluent in Italian. She currently writes only in Italian and then translates her writing into English if necessary. 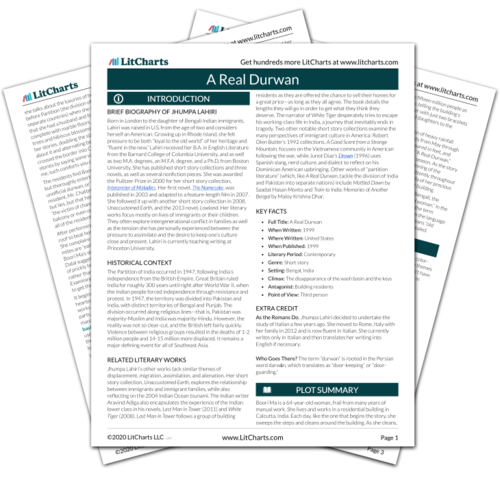 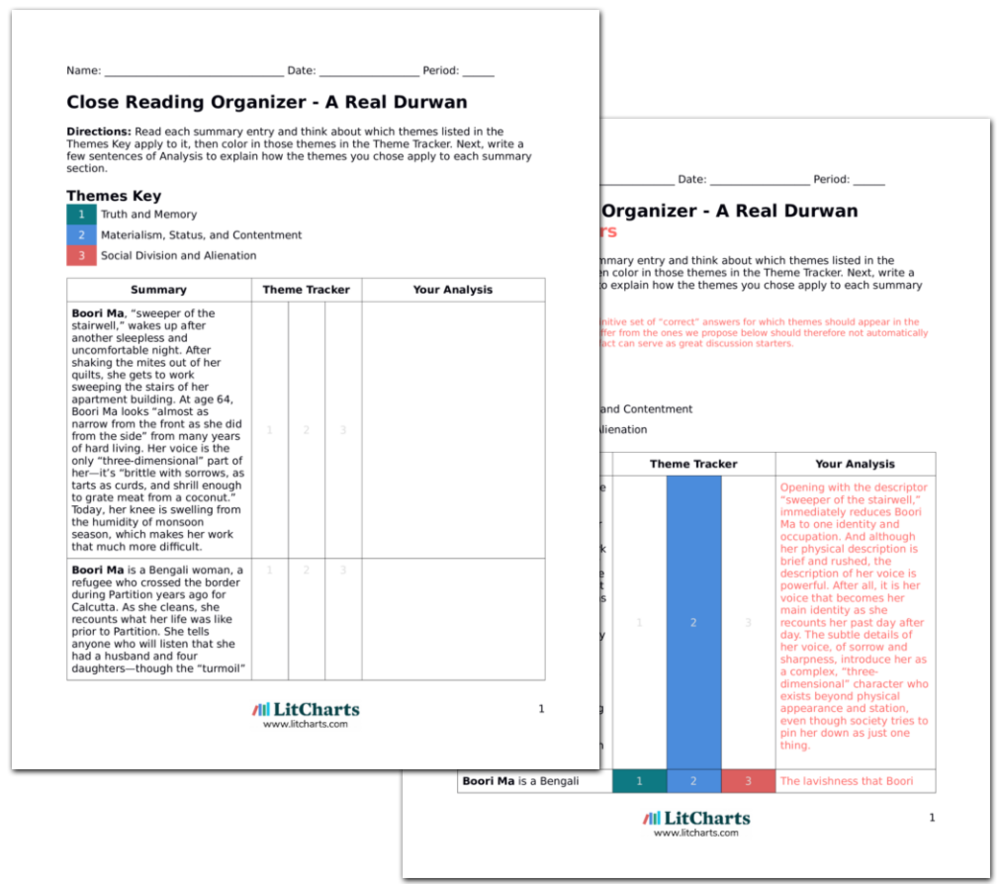