Download this LitChart! (PDF)
Teachers and parents! Struggling with distance learning? Our Teacher Edition on Akata Witch can help.

Welcome to the LitCharts study guide on Nnedi Okorafor's Akata Witch. Created by the original team behind SparkNotes, LitCharts are the world's best literature guides.

A concise biography of Nnedi Okorafor plus historical and literary context for Akata Witch.

A quick-reference summary: Akata Witch on a single page.

In-depth summary and analysis of every chapter of Akata Witch. Visual theme-tracking, too.

Explanations of Akata Witch's symbols, and tracking of where they appear.

An interactive data visualization of Akata Witch's plot and themes.

Okorafor’s parents immigrated to the United States both for their education and to escape the Nigerian Civil War. They took Okorafor to visit Nigeria often throughout her childhood and adolescence, though Okorafor was considered “too American” in Nigeria and “too Black” at home in the U.S. She spent her teenage years as a track and tennis star and also loved math and science, but a scoliosis diagnosis put her involvement in sports to an end. She underwent surgery for her scoliosis at age 19, became briefly paralyzed from the waist down, and began writing short stories during her time in the hospital. Throughout her time as a student, during which she earned a master’s in journalism and English and a PhD in English, her professors discouraged her from writing science fiction. But eventually, she began writing science fiction and fantasy anyway. She began winning awards for her short stories in 2001, and since then, her stories and novels have won various awards including Nebulas, Hugos, and the Wole Soyinka Prize for Literature in Africa. Akata Witch has been named an ALA Best Fiction Book for Young Adults, was nominated for a Nebula, and was an Amazon.com Best Book of the Year. Okorafor lives in Arizona with her daughter.
Get the entire Akata Witch LitChart as a printable PDF.
"My students can't get enough of your charts and their results have gone through the roof." -Graham S.
Download 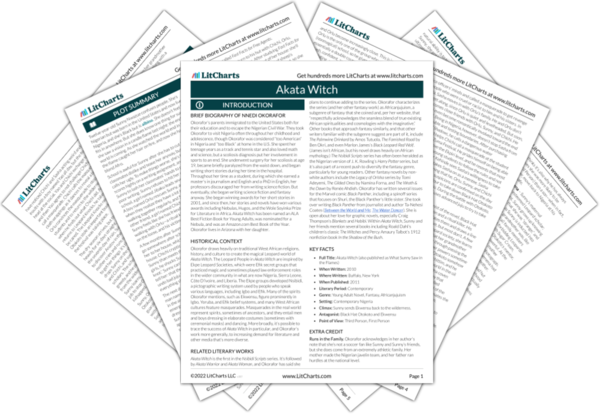 Okorafor draws heavily on traditional West African religions, history, and culture to create the magical Leopard world of Akata Witch. The Leopard People in Akata Witch are inspired by Ekpe Leopard Societies, which were Efik secret groups that practiced magic and sometimes played law enforcement roles in the wider community in what are now Nigeria, Sierra Leone, Côte D’Ivoire, and Liberia. The Ekpe groups developed Nsibidi, a pictographic writing system used by people who speak various languages, including Igbo and Efik. Many of the spirits Okorafor mentions, such as Ekwensu, figure prominently in Igbo, Yoruba, and Efik belief systems, and many West African cultures feature masquerades. Masquerades in the real world represent spirits, sometimes of ancestors, and they entail men and boys dressing in elaborate costumes (sometimes with ceremonial masks) and dancing. More broadly, it’s possible to trace the success of Akata Witch in particular, and Okorafor’s work more generally, to increasing demand for literature and other media that’s more diverse.

Other Books Related to Akata Witch

Akata Witch is the first in the Nsibidi Scripts series. It’s followed by Akata Warrior and Akata Woman, and Okorafor has said she plans to continue adding to the series. Okorafor characterizes the series (and her other fantasy work) as Africanjujuism, a subgenre of fantasy that she coined and, per her website, that “respectfully acknowledges the seamless blend of true existing African spiritualities and cosmologies with the imaginative.” Other books that approach fantasy similarly, and that other writers familiar with the subgenre suggest are part of it, include The Palmwine Drinkard by Amos Tutuola, The Famished Road by Ben Okri, and even Marlon James’s Black Leopard Red Wolf. (James isn’t African, but his novel draws heavily on African mythology.) The Nsibidi Scripts series has often been heralded as the Nigerian version of J. K. Rowling’s Harry Potter series, but it’s also part of a recent push to diversify the fantasy genre, particularly for young readers. Other fantasy novels by non-white authors include the Legacy of Orïsha series by Tomi Adeyemi, The Gilded Ones by Namina Forna, and The Wrath & the Dawn by Renée Ahdieh. Okorafor has written several issues for the Marvel comic Black Panther, including a spinoff series that focuses on Shuri, the Black Panther’s little sister. She took over writing Black Panther from journalist and author Ta-Nehesi Coates (Between the World and Me; The Water Dancer). She is open about her love for graphic novels, especially Craig Thompson’s Blankets and Habibi. Within Akata Witch, Sunny and her friends mention several books including Roald Dahl’s children’s classic The Witches and Percy Amaury Talbot’s 1912 nonfiction book In the Shadow of the Bush.
Key Facts about Akata Witch

Runs in the Family. Okorafor acknowledges in her author’s note that she’s not a soccer fan like Sunny and Sunny’s friends, but she does come from an extremely athletic family. Her mother made the Nigerian javelin team, and her father ran hurdles at the national level. 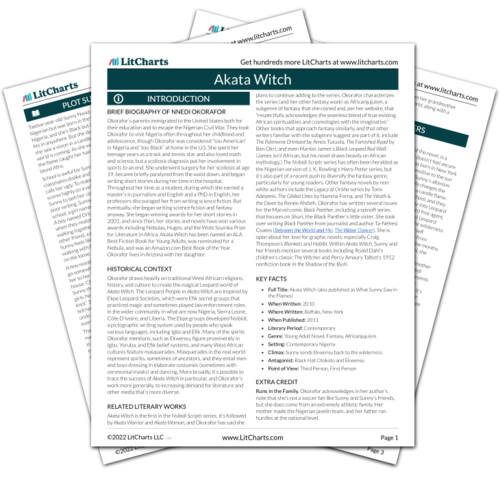 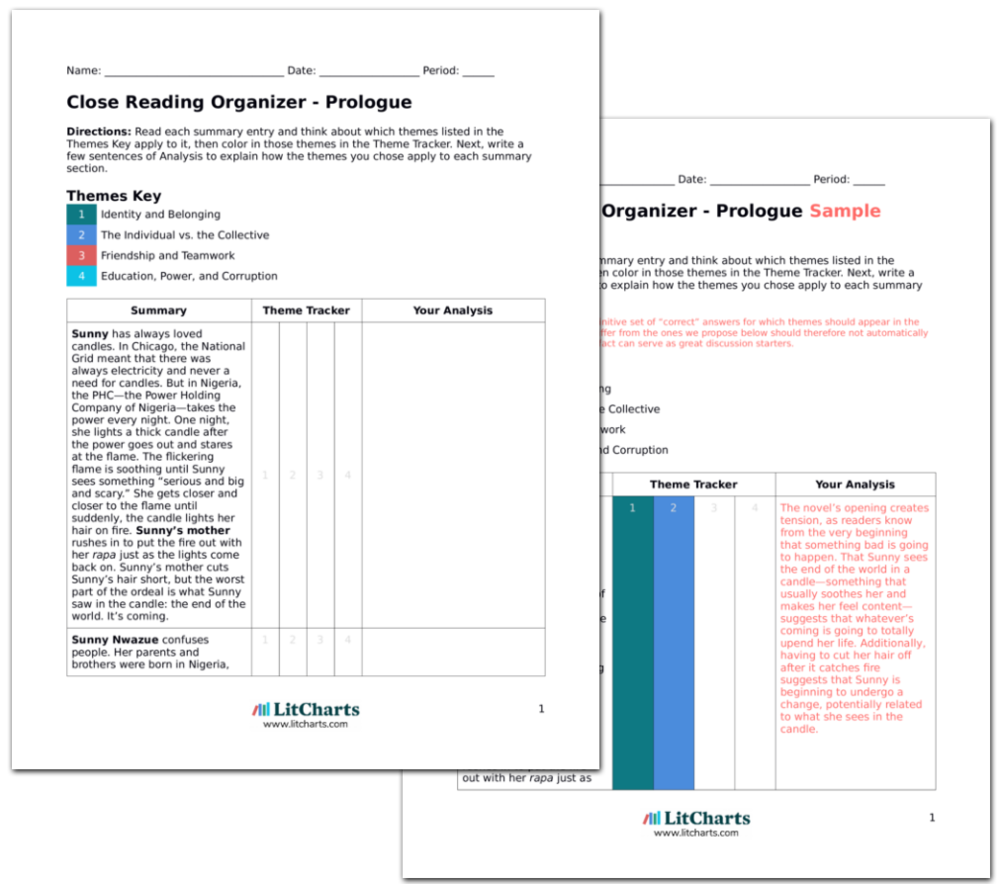