Welcome to the LitCharts study guide on Annie Dillard's An American Childhood. Created by the original team behind SparkNotes, LitCharts are the world's best literature guides.

A concise biography of Annie Dillard plus historical and literary context for An American Childhood.

A quick-reference summary: An American Childhood on a single page.

In-depth summary and analysis of every chapter of An American Childhood. Visual theme-tracking, too.

Explanations, analysis, and visualizations of An American Childhood's themes.

Description, analysis, and timelines for An American Childhood's characters.

Explanations of An American Childhood's symbols, and tracking of where they appear.

An interactive data visualization of An American Childhood's plot and themes.

Dillard was born as Annie Doak in Pittsburgh, and her childhood there is the subject of An American Childhood. Dillard attended Hollins College in Virginia, where she received both a BA in literature and creative writing, and a MA in English. She published her first book, Pilgrim at Tinker Creek, in 1974, and it received the Pulitzer Prize. She has since written a number of other books in various genres, including poetry, novelistic prose, travel writing, and literary criticism. Since 1999 she has been a member of the Academy of Arts and Letters.
Get the entire An American Childhood LitChart as a printable PDF.
"My students can't get enough of your charts and their results have gone through the roof." -Graham S.
Download 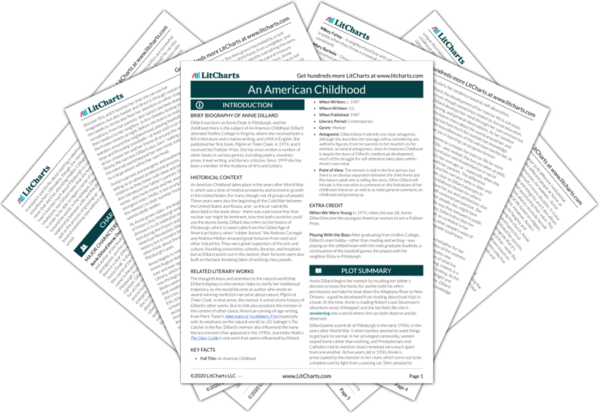 Historical Context of An American Childhood

An American Childhood takes place in the years after World War II, which was a time of relative prosperity and economic growth in the United States (for many, though, not all groups of people). These years were also the beginning of the Cold War between the United States and Russia, and—as the air raid drills described in the book show—there was a pervasive fear that nuclear war might be imminent, now that both countries could use the atomic bomb. Dillard also refers to the history of Pittsburgh, which is inextricable from the Gilded Age of American history, when “robber barons” like Andrew Carnegie and Andrew Mellon amassed great fortunes from steel and other industries. They were great supporters of the arts and culture, founding universities, schools, libraries, and hospitals; but as Dillard points out in the memoir, their fortunes were also built on the back-breaking labor of working-class people.

Other Books Related to An American Childhood

The thoughtfulness and attention to the natural world that Diillard displays in the memoir helps to clarify her intellectual trajectory, as she would become an author who wrote an award-winning nonfiction narrative about nature, Pilgrim at Tinker Creek. In that sense, the memoir is a kind of pre-history of Dillard’s other works. But its title also positions this memoir in the context of other classic American coming-of-age writing, from Mark Twain’s Adventures of Huckleberry Finn (especially with its emphasis on the natural world) to J.D. Salinger’s The Catcher in the Rye. Dillard’s memoir also influenced the many literary memoirs that appeared in the 1990s; Jeannette Walls’s The Glass Castle is one work that seems influenced by Dillard.
Key Facts about An American Childhood

Extra Credit for An American Childhood

When We Were Young In 1974, when she was 28, Annie Dillard became the youngest American woman to win a Pulitzer Prize.

Playing With the Boys After graduating from Hollins College, Dillard’s main hobby—other than reading and writing—was playing on the softball team with the male graduate students, a continuation of the baseball games she played with her neighbor Ricky in Pittsburgh. 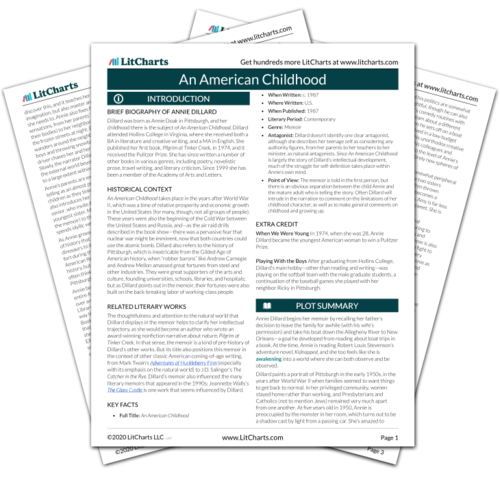 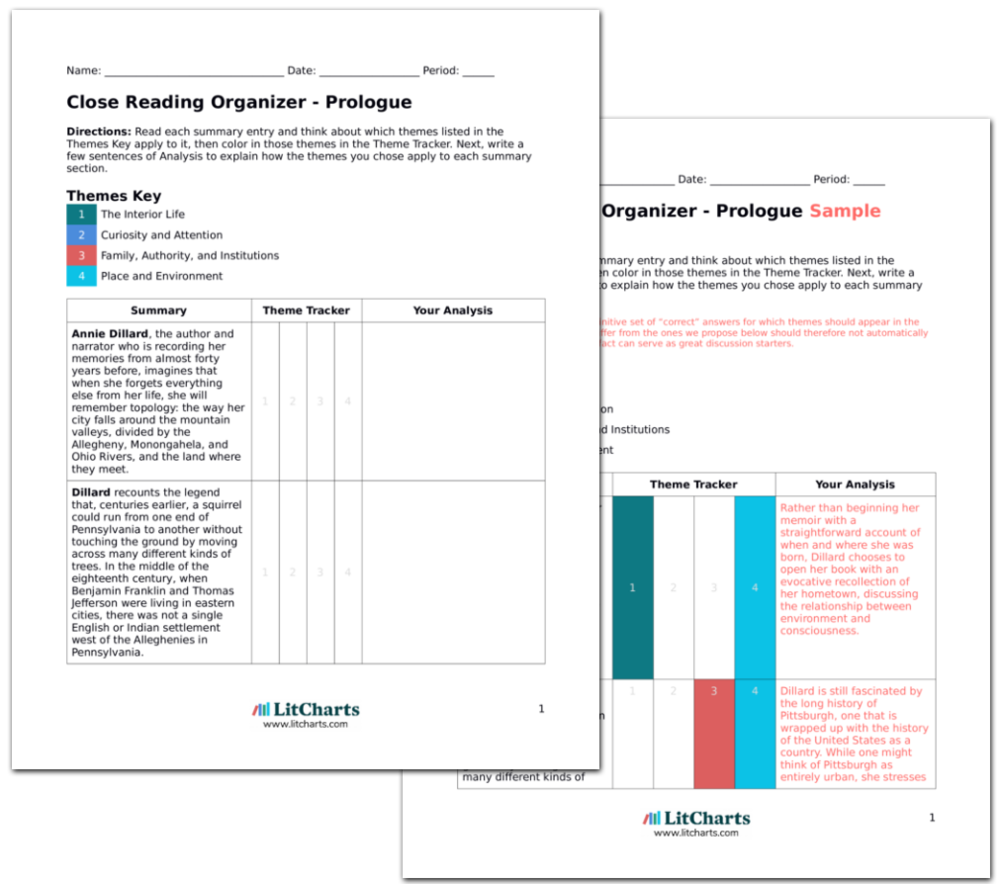