Download this LitChart! (PDF)
Teachers and parents! Struggling with distance learning? Our Teacher Edition on An Apology for Poetry can help.

Welcome to the LitCharts study guide on Philip Sidney's An Apology for Poetry. Created by the original team behind SparkNotes, LitCharts are the world's best literature guides.

An Apology for Poetry: Introduction

A concise biography of Philip Sidney plus historical and literary context for An Apology for Poetry.

An Apology for Poetry: Plot Summary

A quick-reference summary: An Apology for Poetry on a single page.

In-depth summary and analysis of every of An Apology for Poetry. Visual theme-tracking, too.

An Apology for Poetry: Themes

Explanations, analysis, and visualizations of An Apology for Poetry's themes.

An Apology for Poetry: Quotes

An Apology for Poetry's important quotes, sortable by theme, character, or .

An Apology for Poetry: Characters

Description, analysis, and timelines for An Apology for Poetry's characters.

An Apology for Poetry: Symbols

Explanations of An Apology for Poetry's symbols, and tracking of where they appear.

An Apology for Poetry: Theme Wheel

An interactive data visualization of An Apology for Poetry's plot and themes.

Sir Philip Sidney was a child of privilege, born to Sir Henry Sidney, Elizabeth I’s governor of Ireland, and Lady Mary Dudley. His godfather was King Philip II of Spain; his uncle Robert Dudley was one of Elizabeth’s closest advisers. Philip was educated to join his family’s tradition of service, first at the Shrewsbury School and then at Oxford. Following a three-year tour of Europe (1572-1575), where he perfected his languages and became familiar with European politics, Sidney returned to Elizabeth’s court and embarked on a career as diplomat and parliamentarian. A man of broad interests, he befriended leading artists and scholars of the day (including poet Edmund Spenser and alchemist John Dee), and was the dedicatee of more than 40 books on subjects as diverse as painting, law, poetry, and botany. Despite his education and social background, Sidney struggled to land a job of any real importance (he was knighted in 1583 only so that he could stand in for a nobleman in an important royal ceremony) and so directed his energies into creative work. He finished the 180,000-word heroic prose romance the Arcadia in 1580, and in 1582 wrote Astrophel and Stella, which is considered the most important English sonnet sequence after Shakespeare’s. Around the same time, he wrote An Apology for Poetry, introducing Continental ideas about literature to England. Later he started but did not finish an expansion of the Arcadia as well as a paraphrase of the Psalms. Sidney was renowned for his gentlemanly manners, and, fitting with his status, none of his works were printed and sold in his lifetime. In 1585, he was appointed joint-administrator of the British ordnance, which oversaw the distribution of arms in the kingdom. In this capacity he volunteered to serve in England’s war with the Spanish in the Netherlands, where, in defense of a supply convoy, he was grazed by an enemy bullet, and died from infection soon after. He is buried in St. Paul’s cathedral in London.
Get the entire An Apology for Poetry LitChart as a printable PDF.
"My students can't get enough of your charts and their results have gone through the roof." -Graham S.
Download 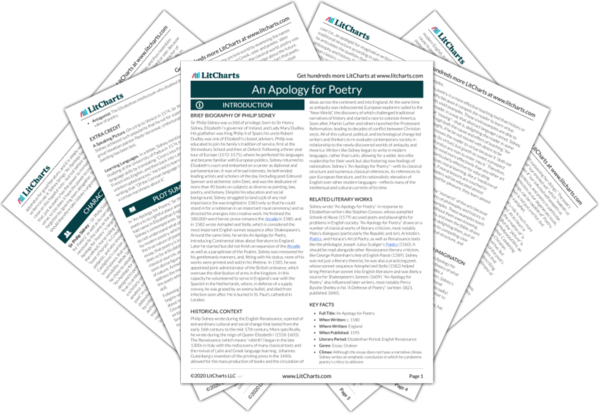 Historical Context of An Apology for Poetry

Philip Sidney wrote during the English Renaissance, a period of extraordinary cultural and social change that lasted from the early 16th century to the mid-17th century. More specifically, he wrote during the reign of Queen Elizabeth I (1558-1603). The Renaissance (which means “rebirth”) began in the late 1300s in Italy with the rediscovery of many classical texts and the revival of Latin and Greek language learning. Johannes Gutenberg’s invention of the printing press in the 1440s allowed for the mass production of books and the circulation of ideas across the continent and into England. At the same time as antiquity was rediscovered, European explorers sailed to the “New World,” the discovery of which challenged traditional narratives of history and started a race to colonize America. Soon after, Martin Luther and others launched the Protestant Reformation, leading to decades of conflict between Christian sects. All of this cultural, political, and technological change led writers and thinkers to re-evaluate contemporary society in relationship to the newly discovered worlds of antiquity and America. Writers like Sidney began to write in modern languages, rather than Latin, allowing for a wider, less elite readership for their work but also fostering new feelings of nationalism. Sidney’s “An Apology for Poetry”—with its classical structure and numerous classical references, its references to pan-European literature, and its nationalistic elevation of English over other modern languages—reflects many of the intellectual and cultural currents of its time.

Other Books Related to An Apology for Poetry

Sidney wrote “An Apology for Poetry” in response to Elizabethan writers like Stephen Gosson, whose pamphlet Schoole of Abuse (1579) accused poets and playwrights for problems in English society. “An Apology for Poetry” draws on a number of classical works of literary criticism, most notably Plato’s dialogues (particularly the Republic and Ion), Aristotle’s Poetics, and Horace’s Art of Poetry, as well as Renaissance texts like the philologist Joseph Julius Scaliger’s Poetics (1560). It should be read alongside other Renaissance literary criticism, like George Puttenham’s Arte of English Poesie (1589). Sidney was not just a literary theorist, he was also a practicing poet, whose sonnet-sequence Astrophel and Stella (1582) helped bring Petrarchan sonnet into English literature and was likely a source for Shakespeare’s Sonnets (1609). “An Apology for Poetry” also influenced later writers, most notably Percy Bysshe Shelley in his “A Defense of Poetry” (written 1821, published 1840).
Key Facts about An Apology for Poetry

Extra Credit for An Apology for Poetry

A Speaking Picture. On a trip to Venice in 1574, Sir Philip Sidney achieved such popularity that he sat for a portrait by the great Venetian painter Paolo Veronese. Unfortunately, the painting has been lost.

Learning Languages. In a letter, Sidney mentioned that while studying at the University of Padua in 1574, he improved his language skills by translating “Cicero into French, then from French into English, and then back into Latin again by an uninterrupted process.” He tried to learn German but gave up, writing that “Of the German language I quite despair, for it has a certain harshness about it.” 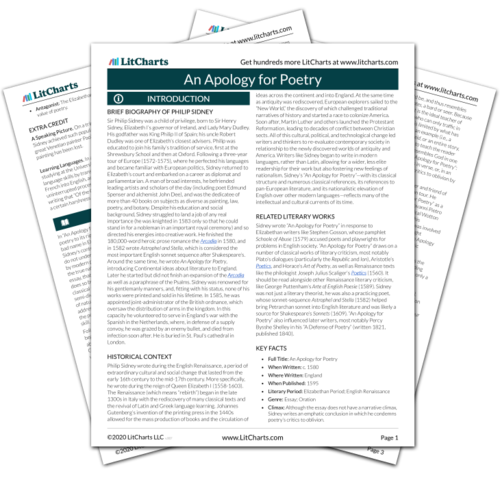 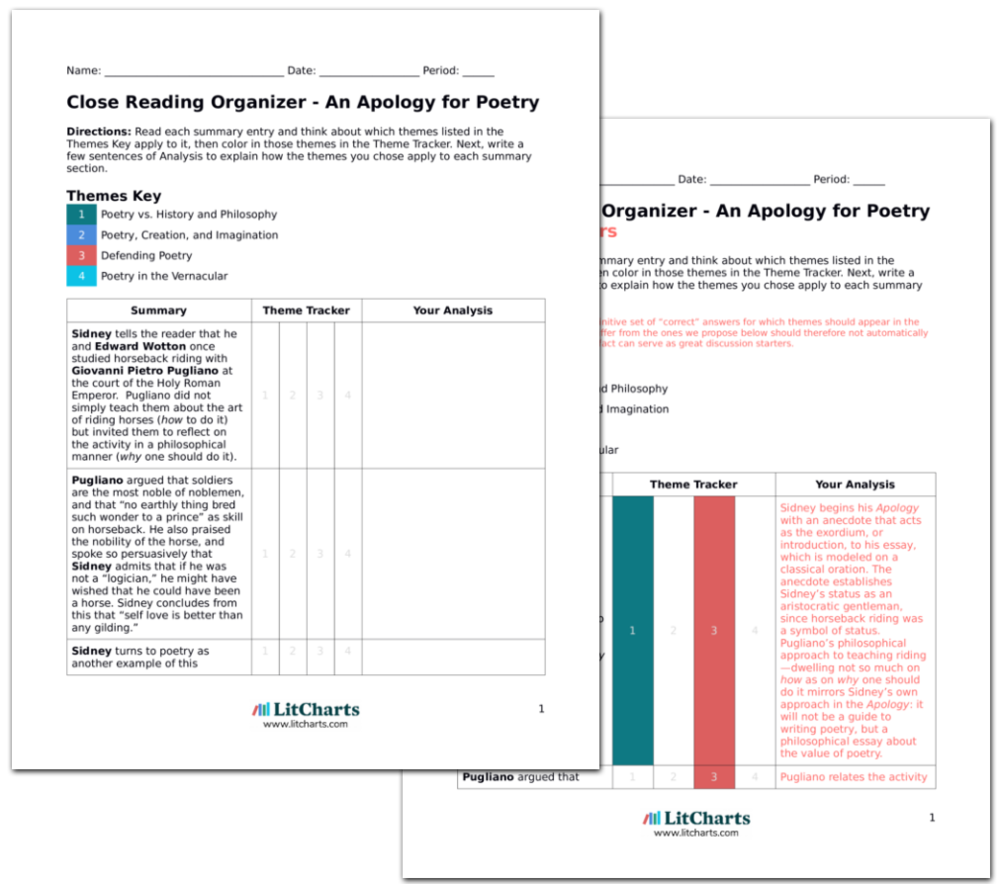