Download this LitChart! (PDF)
Teachers and parents! Struggling with distance learning? Our Teacher Edition on At the ’Cadian Ball can help.

Welcome to the LitCharts study guide on Kate Chopin's At the ’Cadian Ball. Created by the original team behind SparkNotes, LitCharts are the world's best literature guides.

At the ’Cadian Ball: Introduction

A concise biography of Kate Chopin plus historical and literary context for At the ’Cadian Ball.

At the ’Cadian Ball: Plot Summary

A quick-reference summary: At the ’Cadian Ball on a single page.

In-depth summary and analysis of every of At the ’Cadian Ball. Visual theme-tracking, too.

At the ’Cadian Ball: Themes

Explanations, analysis, and visualizations of At the ’Cadian Ball's themes.

At the ’Cadian Ball: Quotes

At the ’Cadian Ball's important quotes, sortable by theme, character, or .

At the ’Cadian Ball: Characters

Description, analysis, and timelines for At the ’Cadian Ball's characters.

At the ’Cadian Ball: Symbols

Explanations of At the ’Cadian Ball's symbols, and tracking of where they appear.

At the ’Cadian Ball: Theme Wheel

An interactive data visualization of At the ’Cadian Ball's plot and themes.

Kate Chopin was born and raised in a Roman Catholic family of Irish and French descent. At age five, her family sent her to study at Sacred Heart Academy, where she learned various life skills, such as handling money, and became an avid reader. She suffered many losses during the American Civil War, including the death of her great-grandmother. In 1870, she married Oscar Chopin and settled in New Orleans, where she had six children in the next nine years. In 1879, the family relocated to Cloutierville, as Oscar’s cotton brokerage had failed, and found work in managing several small plantations and a general store. The Creoles of Cloutierville formed the inspiration for Kate’s later writing. After the death of Oscar in 1882, Kate moved back to St. Louis, her birthplace, where she began writing as a way to stave off her depression from the deaths of her husband and mother. She became quite successful, but never made much money from writing, and had to depend on investments and her mother’s inheritance to support her. She died at age 54 from a brain hemorrhage.
Get the entire At the ’Cadian Ball LitChart as a printable PDF.
"My students can't get enough of your charts and their results have gone through the roof." -Graham S.
Download 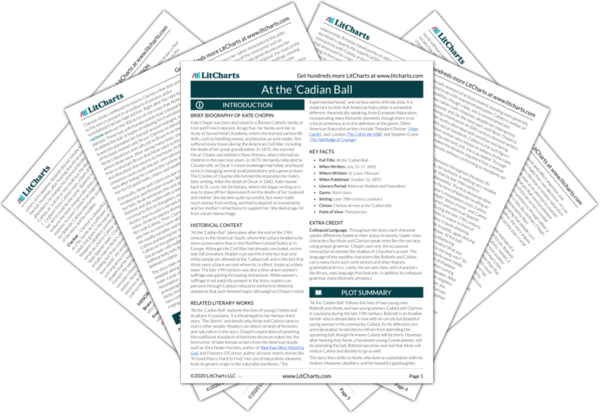 Historical Context of At the ’Cadian Ball

“At the ’Cadian Ball” takes place after the end of the 19th century in the American South, where the culture tended to be more conservative than in the Northern United States or in Europe. Although the Civil War had already concluded, racism was still prevalent. Readers can see this in the fact that only white people are allowed at the ’Cadian ball, and in the fact that Alcée owns a black servant whom he, in effect, treats as a black slave. The late-19th century was also a time where women’s suffrage was gaining increasing momentum. While women’s suffrage is not explicitly present in the story, readers can perceive through Calixta’s refusal to conform to feminine standards that such feminist topics did weigh on Chopin’s mind.

Other Books Related to At the ’Cadian Ball

“At the ’Cadian Ball” explores the lives of young Creoles and Acadians in Louisiana. It is the prequel to her famous short story “The Storm,” and details why Alcée and Calixta came to marry other people. Readers can detect strands of feminism and naturalism in the story. Chopin’s exploration of upsetting the traditional standards of feminine decorum makes her the forerunner of later female writers from the American South, such as Zora Neale Hurston, author of Their Eyes Were Watching God, and Flannery O’Connor, author of iconic shorts stories like “A Good Man is Hard to Find.” Her use of naturalistic elements finds its generic origin in the naturalist manifesto, “The Experimental Novel,” and various works of Émile Zola. It is important to note that American Naturalism is somewhat different, theoretically speaking, from European Naturalism, incorporating more Romantic elements, though there is no critical consensus as to the definition of the genre. Other American Naturalist writers include Theodore Dreiser (Sister Carrie), Jack London (The Call of the Wild), and Stephen Crane (The Red Badge of Courage).
Key Facts about At the ’Cadian Ball

Extra Credit for At the ’Cadian Ball

Colloquial Language. Throughout the story, each character speaks differently based on their status in society. Upper-class characters like Alcée and Clarisse speak most like the narrator, using proper grammar. Chopin uses only the occasional contraction to denote the shadow of a Southern accent. The language of less wealthy characters like Bobinôt and Calixta carry many more such contractions and often feature grammatical errors. Lastly, the servant class, with characters like Bruce, uses language that features, in addition to colloquial grammar, many idiomatic phrases.s 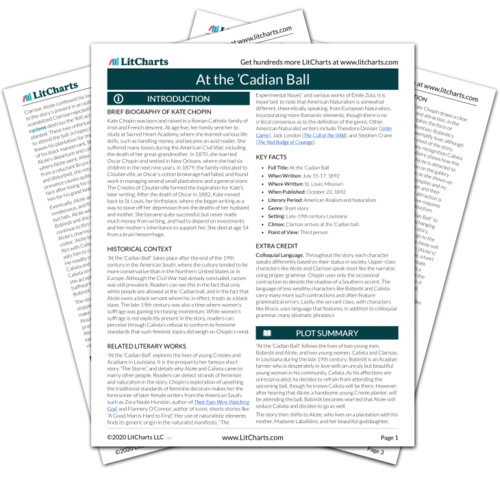 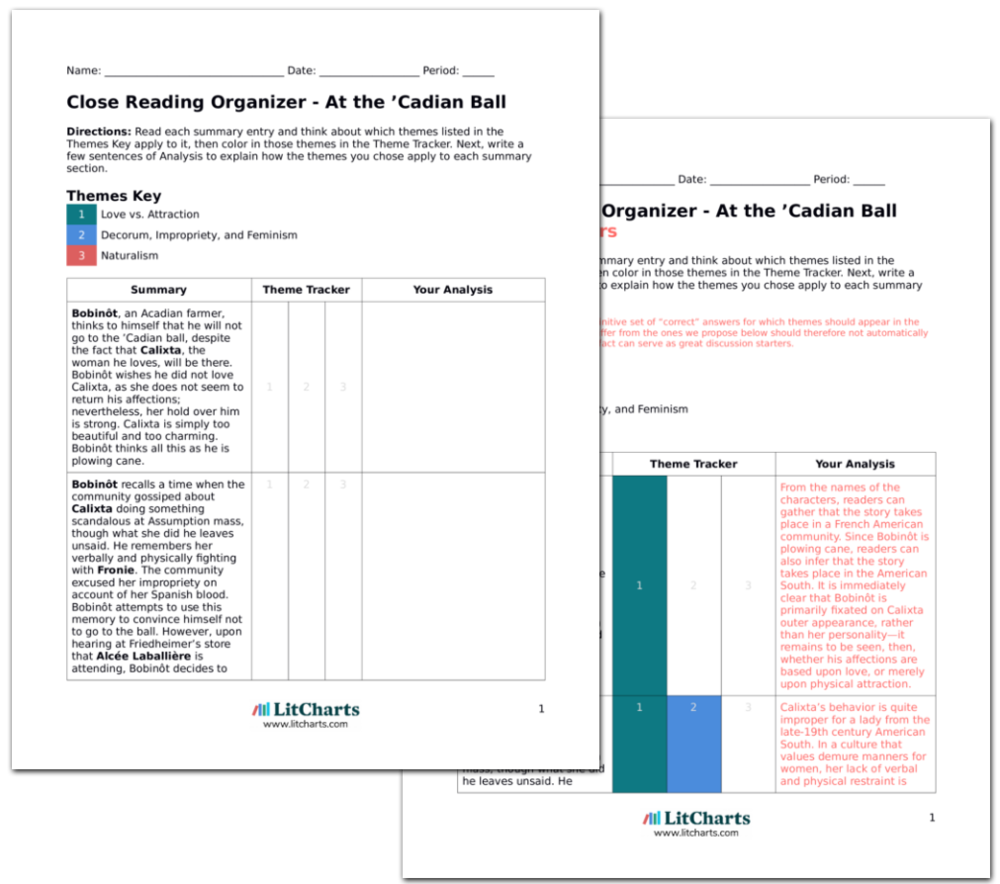