Download this LitChart! (PDF)
Teachers and parents! Struggling with distance learning? Our Teacher Edition on Sister Carrie can help.

Welcome to the LitCharts study guide on Theodore Dreiser's Sister Carrie. Created by the original team behind SparkNotes, LitCharts are the world's best literature guides.

A concise biography of Theodore Dreiser plus historical and literary context for Sister Carrie.

A quick-reference summary: Sister Carrie on a single page.

In-depth summary and analysis of every chapter of Sister Carrie. Visual theme-tracking, too.

Explanations of Sister Carrie's symbols, and tracking of where they appear.

An interactive data visualization of Sister Carrie's plot and themes.

Theodore Dreiser was born to a large, poor family in the American Midwest. His father was a millworker who struggled to find employment and a strict adherent to Roman Catholicism. This led Dreiser to associate his father’s lack of productivity with religion. In this period, Dreiser also developed a profound desire for material wealth, something that would serve as inspiration for his works. After studying for a year at Indiana University, Dreiser became a reporter and moved to the East Coast. During these young adult years, he read T. H. Huxley, John Tyndall, and Herbert Spencer, and came to adopt a naturalistic worldview: humans are helpless and wholly subject to the influences of their environment. Dreiser married Sara White in 1898, but his extramarital affairs led them to permanently separate some 14 years later. Dreiser began to write Sister Carrie in 1899 and Doubleday published the book. However, the company was hesitant to do so, uncomfortable with the fact that the novel’s main character is never punished for her immorality, and thus decided to limit advertising for the novel. Consequently, Sister Carrie sold fewer than 500 copies when it first came out. Dreiser’s lack of success with the book and his marital troubles led him into a deep depression. Fortunately, his brother, Paul Dresser, arranged for Dreiser’s treatment in a sanitarium. After recovering, Dreiser became a successful editor for women’s magazines but was forced to resign after a scandal with his assistant’s daughter. Dreiser returned to writing fiction and enjoyed some success until the Great Depression. Dreiser died soon after joining the American Communist Party.
Get the entire Sister Carrie LitChart as a printable PDF.
"My students can't get enough of your charts and their results have gone through the roof." -Graham S.
Download 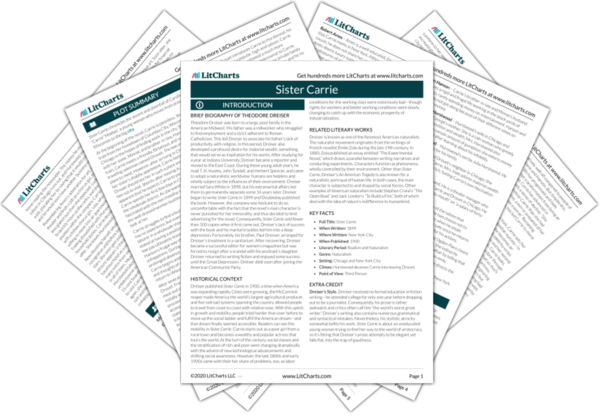 Dreiser published Sister Carrie in 1900, a time when America was expanding rapidly. Cities were growing, the McCormick reaper made America the world’s largest agricultural producer, and five railroad systems spanning the country allowed people to travel from coast to coast with relative ease. With this uptick in growth and mobility, people tried harder than ever before to move up the social ladder and fulfill the American dream—and that dream finally seemed accessible. Readers can see this mobility in Sister Carrie: Carrie starts out as a poor girl from a rural town and becomes a wealthy and popular actress that tours the world. At the turn of the century, social classes and the stratification of rich and poor were changing dramatically with the advent of new technological advancements and shifting social awareness. However, the late 1800s and early 1900s came with their fair share of problems, too, as labor conditions for the working class were notoriously bad—though rights for workers and better working conditions were slowly changing to catch up with the economic prosperity of industrialization.

Other Books Related to Sister Carrie

Dreiser is known as one of the foremost American naturalists. The naturalist movement originates from the writings of French novelist Émile Zola during the late 19th century. In 1880, Zola published an essay entitled “The Experimental Novel,” which draws a parallel between writing narratives and conducting experiments. Characters function as phenomena, wholly controlled by their environment. Other than Sister Carrie, Dreiser’s An American Tragedy is also known for a naturalistic portrayal of human life. In both cases, the main character is subjected to and shaped by social forces. Other examples of American naturalism include Stephen Crane’s “The Open Boat” and Jack London’s “To Build a Fire,” both of which deal with the idea of nature’s indifference to humankind.
Key Facts about Sister Carrie

Dreiser’s Style. Dreiser received no formal education in fiction writing—he attended college for only one year before dropping out to be a journalist. Consequently, his prose is rather awkward, and critics often call him “the world’s worst great writer.” Dreiser’s writing also contains numerous grammatical and syntactical mistakes. Nevertheless, his stylistic atrocity somewhat befits his work. Sister Carrie is about an uneducated young woman trying to find her way to the world of aristocracy, so it’s fitting that Dreiser’s prose attempts to be elegant yet falls flat, into the trap of gaudiness. 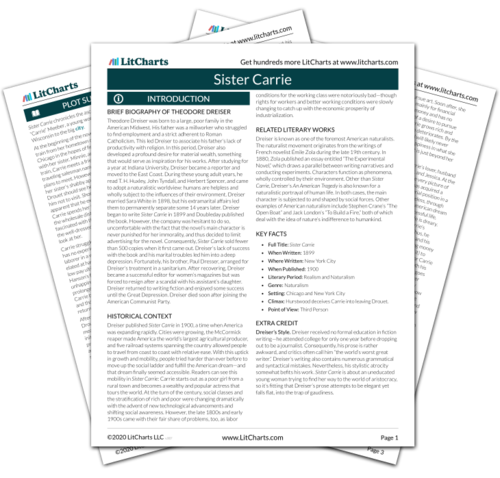 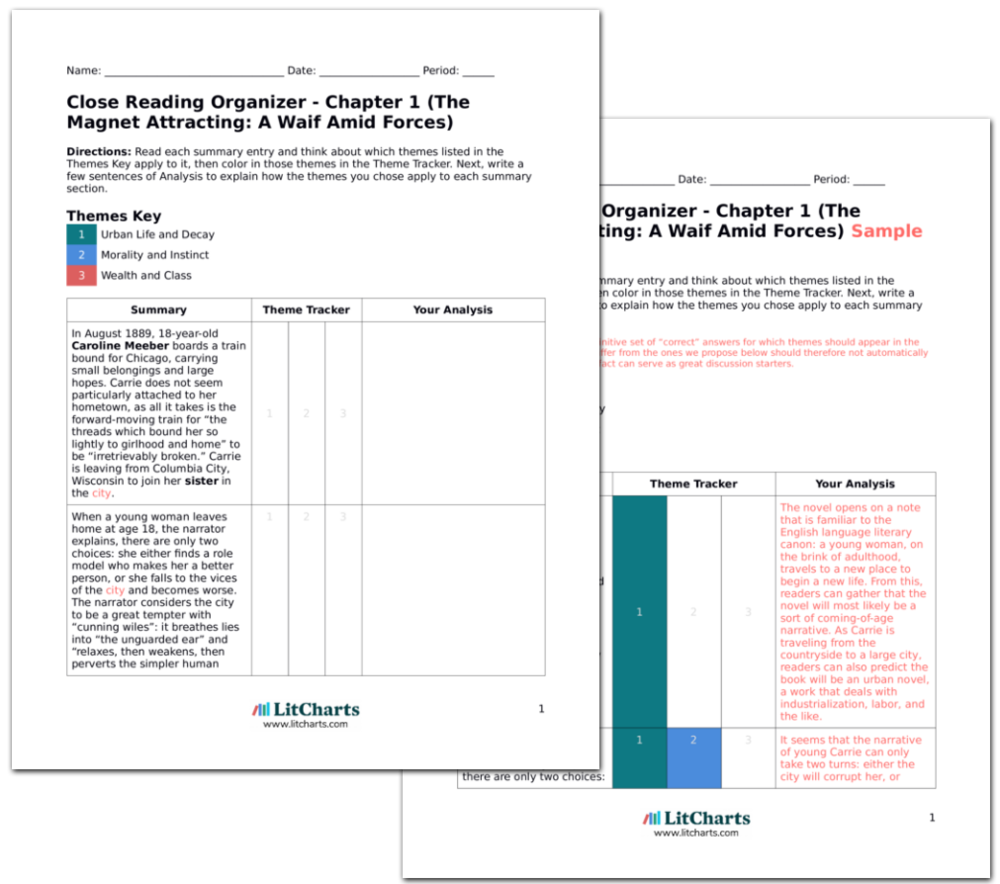