Download this LitChart! (PDF)
Teachers and parents! Struggling with distance learning? Our Teacher Edition on Autobiography of Red can help.

Welcome to the LitCharts study guide on Anne Carson's Autobiography of Red. Created by the original team behind SparkNotes, LitCharts are the world's best literature guides.

A concise biography of Anne Carson plus historical and literary context for Autobiography of Red.

A quick-reference summary: Autobiography of Red on a single page.

In-depth summary and analysis of every chapter of Autobiography of Red. Visual theme-tracking, too.

Explanations, analysis, and visualizations of Autobiography of Red's themes.

Description, analysis, and timelines for Autobiography of Red's characters.

Explanations of Autobiography of Red's symbols, and tracking of where they appear.

An interactive data visualization of Autobiography of Red's plot and themes.

Anne Carson is a Canadian classicist, translator, poet, and essayist. An essential figure in the contemporary poetry scene, Carson is known for writing “unclassifiable” works that blend the genres of prose, poetry, and criticism. Her works frequently draw from Classical and Hellenistic literature, as well. Carson was born in Toronto, Ontario in 1950. A Latin instructor taught Carson Greek during lunch periods throughout high school, which inspired her to study Classics, and she went on to earn her BA, MA, and PhD in Classics from the University of Toronto. Carson published her first work of criticism, Eros the Bittersweet, in 1986. The poetic works Glass, Irony, and God (1992); Plainwater: Essays and Poetry (1995); and Men in the Off Hours (2001) followed. Although these works helped establish Carson as a unique voice in contemporary poetry, her most widely read works are the verse novels Autobiography of Red: A Novel in Verse (1998) and The Beauty of the Husband: A Fictional Essay in 29 Tangos (2001). She has also published numerous well-regarded translations of Classical writers, such as Euripides, Sophocles, and Sappho. Carson has received numerous awards and accolades throughout her career, including a Guggenheim Fellowship for Poetry in 1998 and a MacArthur Fellowship in 2000. She has taught in the Classics departments of universities throughout the United States and Canada, including Princeton University, the University of Michigan, and McGill University.
Get the entire Autobiography of Red LitChart as a printable PDF.
"My students can't get enough of your charts and their results have gone through the roof." -Graham S.
Download 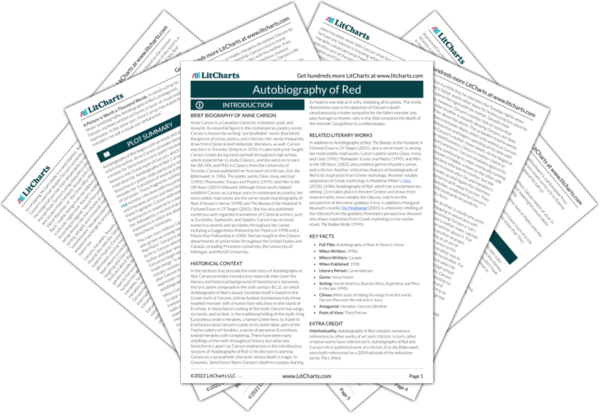 Historical Context of Autobiography of Red

In the sections that precede the main story of Autobiography of Red, Carson provides introductory materials that cover the literary and historical background of Stesichoros’s Geryoneis, the lyric poem composed in the sixth century B.C.E. on which Autobiography of Red is based. Geryoneis itself is based on the Greek myth of Geryon, a three-bodied (sometimes only three-headed) monster with a human face who lives on the island of Erytheia. In Stesichoros’s telling of the myth, Geryon has wings, six hands, and six feet. In the traditional telling of the myth, King Eurystheus orders Herakles, a famed Greek hero, to travel to Erytheia to steal Geryon’s cattle as his tenth labor, part of the Twelve Labors of Herakles, a series of penances Eurystheus tasked Herakles with completing. There have been many retellings of the myth throughout history, but what sets Stesichoros’s apart (as Carson emphasizes in the introductory sections of Autobiography of Red) is his decision to portray Geryon as a sympathetic character whose death is tragic. In Geryoneis, Stesichoros likens Geryon’s death to a poppy leaning its head to one side as it wilts, shedding all its petals. The simile Stesichoros uses in his depiction of Geryon’s death simultaneously creates sympathy for the fallen monster and pays homage to Homer, who in the Iliad compares the death of the monster Gorgythion to a wilted poppy.

Other Books Related to Autobiography of Red

In addition to Autobiography of Red, The Beauty of the Husband: A Fictional Essay in 29 Tangos (2001), also a verse novel, is among her most widely read works. Caron’s poetic works Glass, Irony, and God (1992); Plainwater: Essays and Poetry (1995); and Men in the Off Hours (2001) also combine genres of poetry, prose, and criticism. Another critical key feature of Autobiography of Red is its inspiration from Greek mythology. Another notable adaptation of Greek mythology is Madeline Miller’s Circe (2018). Unlike Autobiography of Red, which has a contemporary setting, Circe takes place in Ancient Greece and draws from several myths, most notably the Odyssey, told from the perspective of the minor goddess Circe. In addition, Margaret Atwood’s novella The Penelopiad (2005) is a feminist retelling of the Odyssey from the goddess Penelope’s perspective. Atwood also draws inspiration from Greek mythology in her earlier novel, The Robber Bride (1993).
Key Facts about Autobiography of Red

Extra Credit for Autobiography of Red

A Picture is Worth a Thousand Words. In constructing his titular autobiography, Autobiography of Red’s protagonist, Geryon, eschews written art forms in favor of visual modes of expression. In the same vein, Anne Carson has stated that “she considers herself a visual, not verbal artist.” 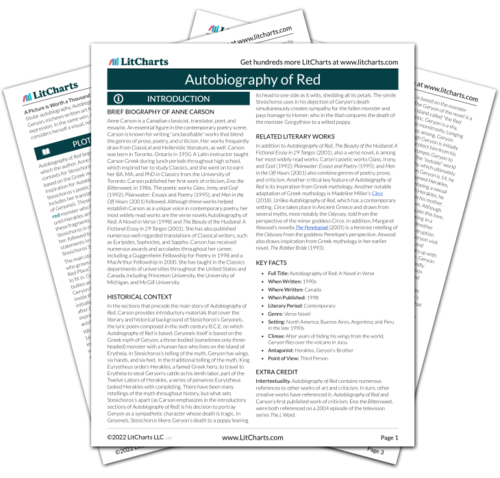 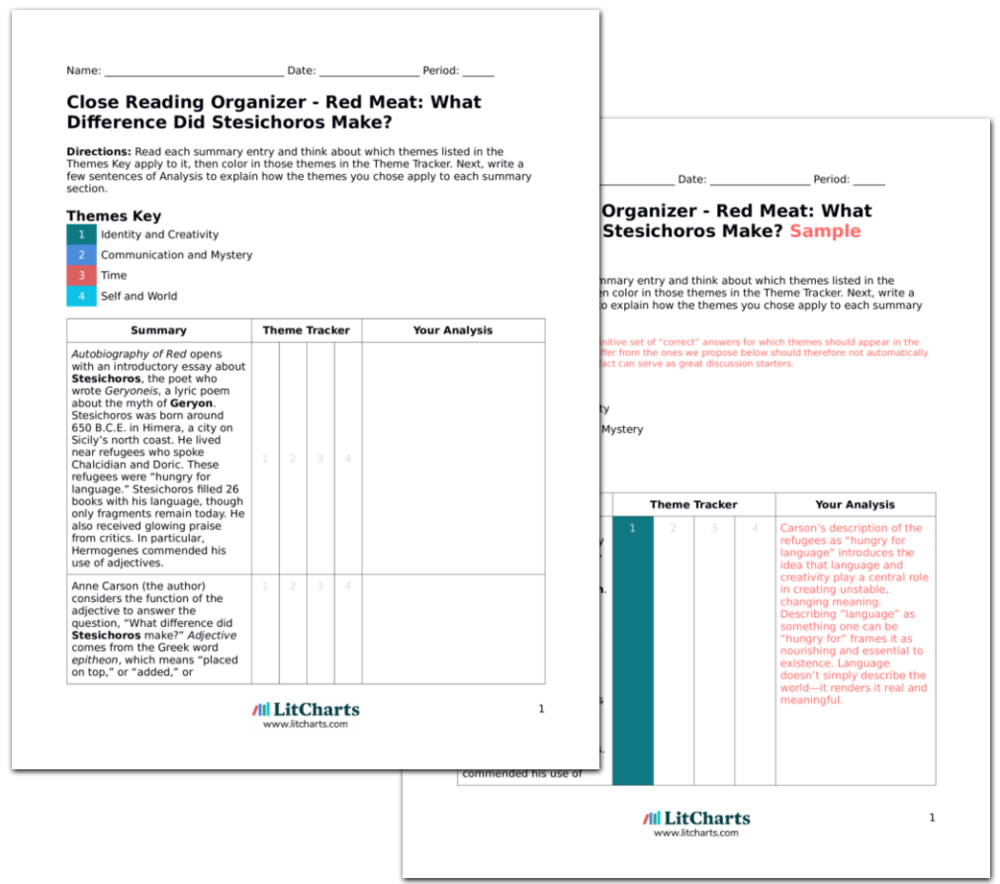