Download this LitChart! (PDF)
Teachers and parents! Struggling with distance learning? Our Teacher Edition on Breakfast at Tiffany’s can help.

Welcome to the LitCharts study guide on Truman Capote's Breakfast at Tiffany’s. Created by the original team behind SparkNotes, LitCharts are the world's best literature guides.

A concise biography of Truman Capote plus historical and literary context for Breakfast at Tiffany’s.

A quick-reference summary: Breakfast at Tiffany’s on a single page.

In-depth summary and analysis of every of Breakfast at Tiffany’s. Visual theme-tracking, too.

Explanations, analysis, and visualizations of Breakfast at Tiffany’s's themes.

Breakfast at Tiffany’s's important quotes, sortable by theme, character, or .

Description, analysis, and timelines for Breakfast at Tiffany’s's characters.

Explanations of Breakfast at Tiffany’s's symbols, and tracking of where they appear.

An interactive data visualization of Breakfast at Tiffany’s's plot and themes.

Truman Capote’s life was one of dizzying highs and devastating lows. Born in New Orleans to a teenage mother, Capote was sent at a very young age to live with his aunts and cousins in Monroeville, Alabama. There, he was a lonely child who took solace in reading and writing. He became friends with his neighbor Harper Lee (author of To Kill a Mockingbird), and their friendship lasted for the remainder of Capote’s life. As a teenager, Capote moved back to New York City to live with his mother and her second husband, José García Capote. After José was imprisoned for embezzlement, however, Capote and his mother bounced around the New York City area and lived in Connecticut for a time. Here, Capote wrote for Greenwich High School’s newspaper and literary journal. After returning to New York, Capote attended the Franklin School while working as a copyboy for The New Yorker, before quitting and moving to Alabama to live with relatives. Back in the South, he began working on his first novel, Summer Crossing, which went unpublished until 2006. Openly homosexual at a time when few other writers were, and a theatrical person to boot, Capote cut quite a figure with the publication of his first book, Other Voices, Other Rooms (1948). 1966’s In Cold Blood is considered by many to be his crowning achievement. After the towering success of In Cold Blood, Truman spent the rest of his life working on an autobiographical “tell-all” book called Answered Prayers, which was never completed. He also wrote short stories and Hollywood screenplays, and was a correspondent for magazines like Rolling Stone and Esquire. In his later years, Capote struggled with mental health issues and drug and alcohol addiction. He died of liver cancer (a complication of alcoholism) in 1984.
Get the entire Breakfast at Tiffany’s LitChart as a printable PDF.
"My students can't get enough of your charts and their results have gone through the roof." -Graham S.
Download 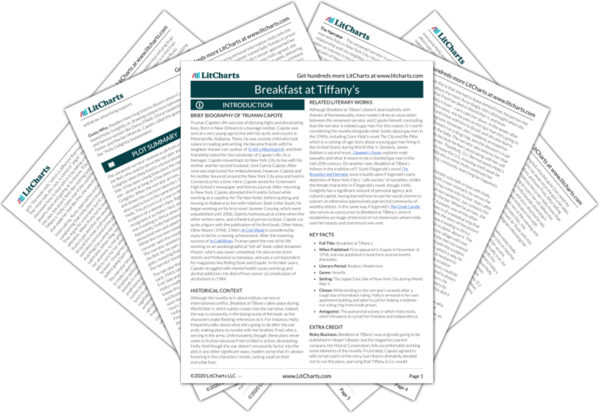 Historical Context of Breakfast at Tiffany’s

Although the novella isn’t about military service or international conflict, Breakfast at Tiffany’s takes place during World War II, which subtly creeps into the narrative. Indeed, the war is constantly in the background of the book, as the characters make fleeting references to it. For instance, Holly frequently talks about what she’s going to do after the war ends, making plans to reunite with her brother, Fred, who is serving in the army. Unfortunately, though, these plans never come to fruition because Fred is killed in action, devastating Holly. And though the war doesn’t necessarily factor into the plot in any other significant ways, readers sense that it’s always hovering in the characters’ minds, casting a pall on their everyday lives.

Other Books Related to Breakfast at Tiffany’s

Although Breakfast at Tiffany’s doesn’t deal explicitly with themes of homosexuality, many readers draw an association between the unnamed narrator and Capote himself, concluding that the narrator is indeed a gay man. For this reason, it’s worth considering the novella alongside other books about gay men in the 1940s, including Gore Vidal’s novel The City and the Pillar, which is a coming-of-age story about a young gay man living in the United States during World War II. Similarly, James Baldwin’s second novel, Giovanni’s Room, explores male sexuality and what it means to be a closeted gay man in the mid-20th century. On another note, Breakfast at Tiffany’s follows in the tradition of F. Scott Fitzgerald’s novel The Beautiful and Damned, since it builds upon Fitzgerald’s early depiction of New York City’s “café society” of socialites. Unlike the female characters in Fitzgerald’s novel, though, Holly Golightly has a significant amount of personal agency and cultural capital, having learned how to use her social charms to subvert an otherwise oppressively patriarchal community of wealthy elitists. In the same way, Fitzgerald’s The Great Gatsby also serves as a precursor to Breakfast at Tiffany’s, since it establishes an image of the kind of rich Americans whom Holly uses her beauty and charisma to win over.
Key Facts about Breakfast at Tiffany’s

Extra Credit for Breakfast at Tiffany’s

Risky Business. Breakfast at Tiffany’s was originally going to be published in Harper’s Bazaar, but the magazine’s parent company, the Hearst Corporation, felt uncomfortable printing some elements of the novella. Frustrated, Capote agreed to edit certain parts of the story, but Hearst ultimately decided not to run the piece, worrying that Tiffany & Co. would withdraw advertising support.

Guess Who. Readers have long tried to discern whom Capote based Holly Golightly on, drawing comparisons between her and famous women like Oona O’Neill, Gloria Vanderbilt, Suzy Parker, and Marilyn Monroe. Capote called this guessing game the “Holly Golightly Sweepstakes.” 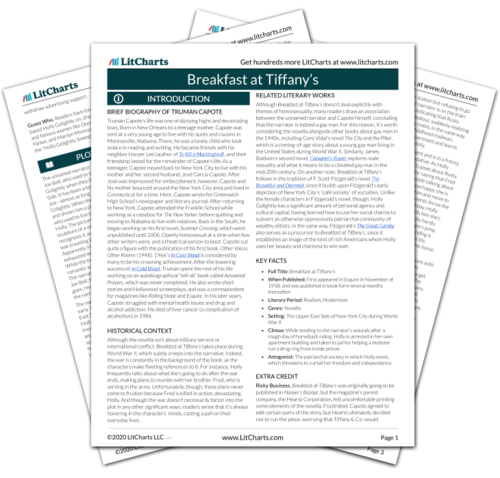 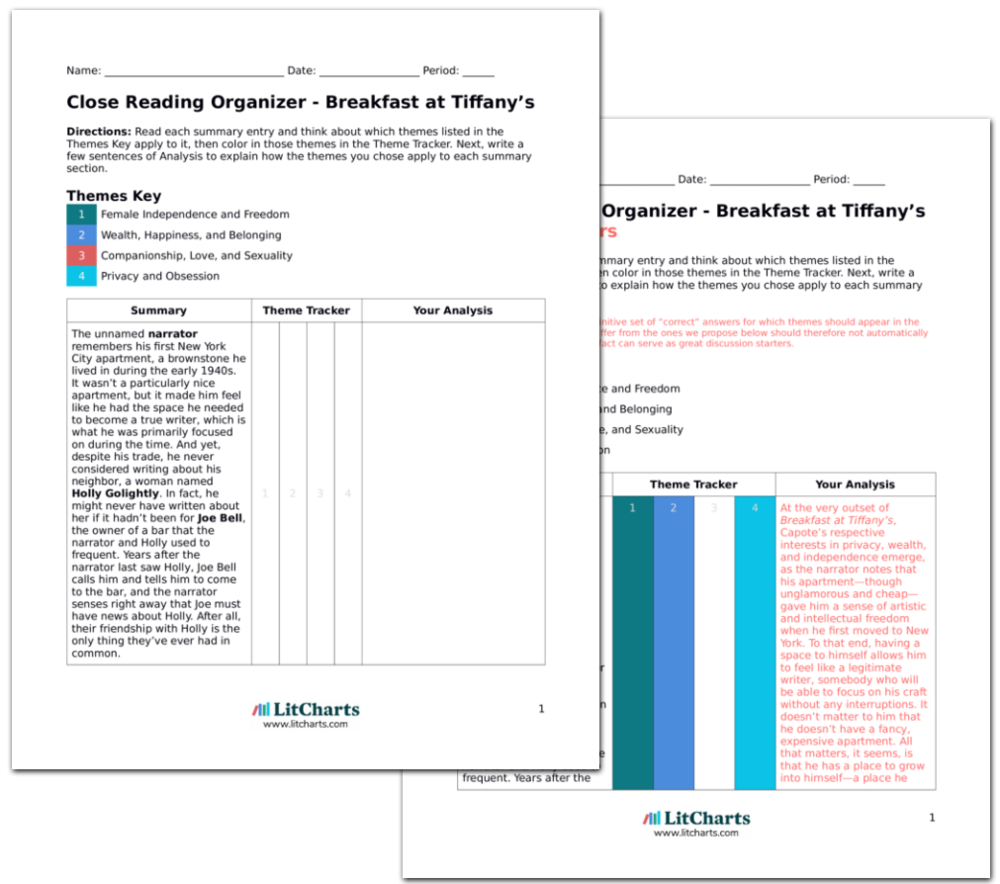