Welcome to the LitCharts study guide on James Baldwin's Giovanni’s Room. Created by the original team behind SparkNotes, LitCharts are the world's best literature guides.

A concise biography of James Baldwin plus historical and literary context for Giovanni’s Room.

A quick-reference summary: Giovanni’s Room on a single page.

In-depth summary and analysis of every chapter of Giovanni’s Room. Visual theme-tracking, too.

Explanations of Giovanni’s Room's symbols, and tracking of where they appear.

An interactive data visualization of Giovanni’s Room's plot and themes.

James Baldwin was born in Harlem in 1924, the grandson of a slave and the eldest of nine children. Though his biological father was absent, a Baptist minister named David Baldwin soon became the young author’s stepfather. Over the years, Baldwin’s relationship with David would prove tenuous yet formative, since his eventual experience as a Youth Minister in an opposing church was both a result and a defiance of his stepfather’s example as a Baptist preacher. In retrospect, Baldwin identified his time in the church—preparing and delivering several sermons per week—as an important step in his development as a writer, since in this role he was forced to closely consider a wide range of human emotions. He calls upon this experience in his most celebrated novel, Go Tell It on the Mountain, as well as in the play The Amen Corner. Upon graduating high school, Baldwin spent the majority of his time in Greenwich Village—at that time a hotbed of creativity and progressive thinking—working as a book reviewer. Around this time, the famous novelist Richard Wright identified Baldwin’s talent and helped him earn a grant in order to work on a novel and sustain himself while doing so. Baldwin moved to Paris in 1948 with the hopes of both physically and psychologically distancing himself from America so that he could write about his country more clearly. The result came in 1953, when he published Go Tell It on the Mountain. Baldwin returned to America in 1957, at which point he became involved with the Civil Rights Movement. This was the beginning of his celebrated career as an outspoken activist and socially-conscious public thinker, advocating for peaceful resolutions of America’s racial tensions. Baldwin worked for the last 10 years of his life in France, penning a number of essential works about American identity in the wake of the assassinations of civil rights activists Medgar Evers and Martin Luther King Jr. Baldwin died of stomach cancer in 1987 in Saint Paul de Vence, France.
Get the entire Giovanni’s Room LitChart as a printable PDF.
"My students can't get enough of your charts and their results have gone through the roof." -Graham S.
Download 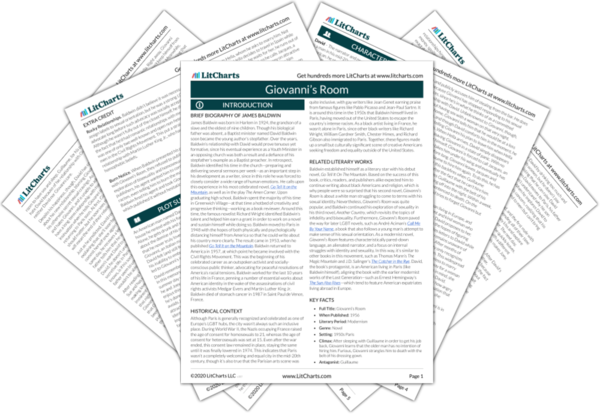 Although Paris is generally recognized and celebrated as one of Europe’s LGBT hubs, the city wasn’t always such an inclusive place. During World War II, the Nazis occupying France raised the age of consent for homosexuals to 21, whereas the age of consent for heterosexuals was set at 15. Even after the war ended, this consent law remained in place, staying the same until it was finally lowered in 1974. This indicates that Paris wasn’t a completely welcoming and equal city in the mid-20th century, though it’s also true that the Parisian arts scene was quite inclusive, with gay writers like Jean Genet earning praise from famous figures like Pablo Picasso and Jean-Paul Sartre. It is around this time in the 1950s that Baldwin himself lived in Paris, having moved out of the United States to escape the country’s intense racism. As a black artist living in France, he wasn’t alone in Paris, since other black writers like Richard Wright, William Gardner Smith, Chester Himes, and Richard Gibson also immigrated to Paris. Together, these figures made up a small but culturally significant scene of creative Americans seeking freedom and equality outside of the United States.

Other Books Related to Giovanni’s Room

Baldwin established himself as a literary star with his debut novel, Go Tell It On The Mountain. Based on the success of this book, critics, readers, and publishers alike expected him to continue writing about black Americans and religion, which is why people were so surprised that his second novel, Giovanni’s Room is about a white man struggling to come to terms with his sexual identity. Nevertheless, Giovanni’s Room was quite popular, and Baldwin continued his exploration of sexuality in his third novel, Another Country, which revisits the topics of infidelity and bisexuality. Furthermore, Giovanni’s Room paved the way for later LGBT novels, such as André Aciman’s Call Me By Your Name, a book that also follows a young man’s attempt to make sense of his sexual orientation. As a modernist novel, Giovanni’s Room features characteristically pared-down language, an alienated narrator, and a focus on internal struggles with identity and sexuality. In this way, it’s similar to other books in this movement, such as Thomas Mann’s The Magic Mountain and J.D. Salinger’s The Catcher in the Rye. David, the book’s protagonist, is an American living in Paris (like Baldwin himself), aligning the book with the earlier modernist works of the Lost Generation—such as Ernest Hemingway’s The Sun Also Rises—which tend to feature American expatriates living abroad in Europe.
Key Facts about Giovanni’s Room

Rocky Relationships. Baldwin didn’t believe it was necessary to assign labels to sexual orientation, but he was a strong LGBT advocate long before such advocacy was socially accepted. Although he wasn’t fully out of the closet himself, he didn’t hide the fact that he’d had romantic relationships with men, and he was one of only two well-known and open non-heterosexual men in the Civil Rights Movement. This put a strain on his relationship with Martin Luther King Jr., who harbored certain homophobic beliefs.

Burn Notice. When Baldwin presented his publishers at Knopf with Giovanni’s Room, they refused to publish it because of its exploration of bisexuality and homosexuality. Like his publishers, his agent wanted him to continue writing about racism, even telling him to burn the manuscript. In response, Baldwin fired his agent and took Giovanni’s Room to Dial Press, which published it without hesitation. 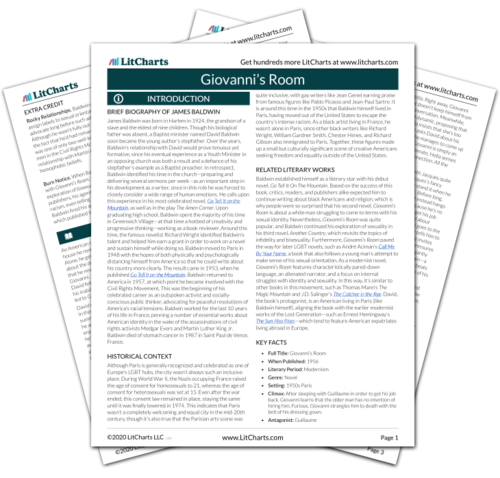 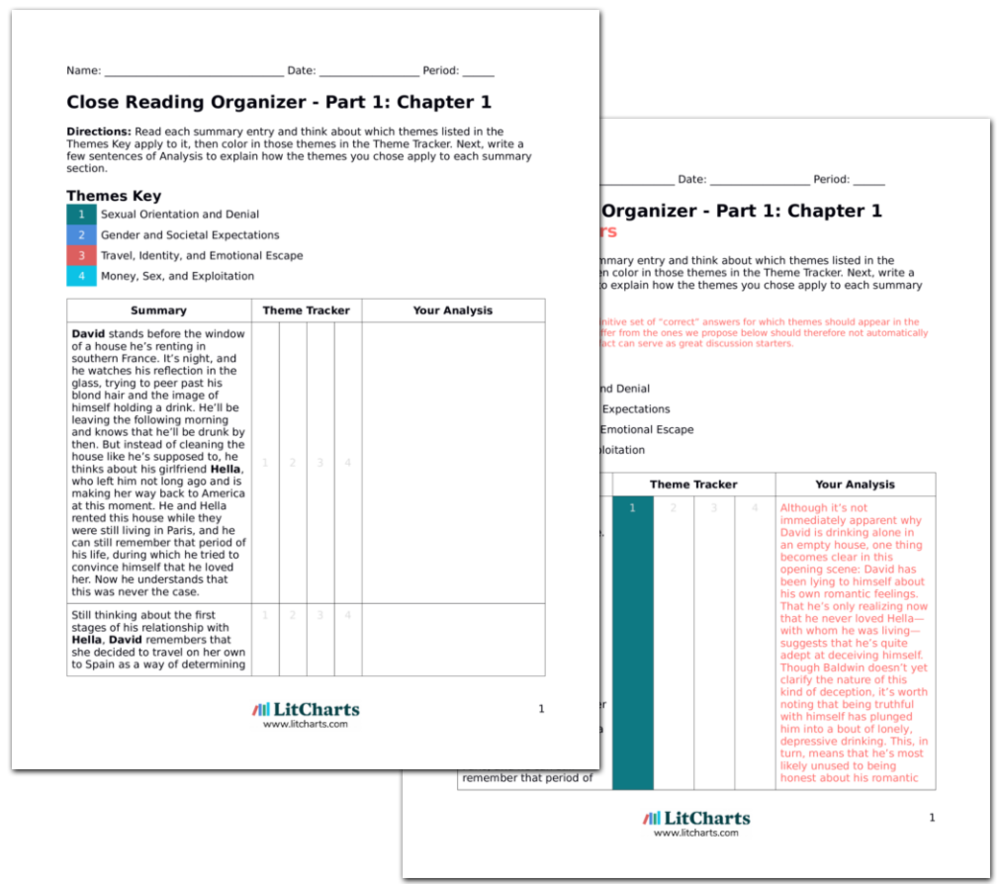