Welcome to the LitCharts study guide on Katherine Paterson's Bridge to Terabithia. Created by the original team behind SparkNotes, LitCharts are the world's best literature guides.

A concise biography of Katherine Paterson plus historical and literary context for Bridge to Terabithia.

A quick-reference summary: Bridge to Terabithia on a single page.

In-depth summary and analysis of every chapter of Bridge to Terabithia. Visual theme-tracking, too.

Explanations, analysis, and visualizations of Bridge to Terabithia's themes.

Description, analysis, and timelines for Bridge to Terabithia's characters.

Explanations of Bridge to Terabithia's symbols, and tracking of where they appear.

An interactive data visualization of Bridge to Terabithia's plot and themes.

Katherine Paterson was born Katherine Womeldorf to Presbyterian missionary parents stationed in Qing Jiang, China. Her father was a preacher who headed a local boys’ school—but during the Japanese invasion of 1937, the family was forced to return to the United States. During the war, the family moved around the American South incessantly, spending time in North Carolina, Virginia, and West Virginia—an experience that disoriented young Paterson, whose first language was Chinese. As Paterson grew older, however, she developed a love of language, reading, and writing, and graduated summa cum laude from King College, a private Presbyterian college in Tennessee, in 1954. She later traveled to Japan, and her experiences there formed the basis for her first published novel, 1973’s The Sign of the Chrysanthemum, which is set in 12th-century Japan. In 1977, Paterson’s novel Bridge to Terabithia was published to widespread acclaim. The book won the 1978 Newbery Medal and has since become a staple of contemporary children’s literature. Paterson is also the author of Jacob Have I Loved and The Great Gilly Hopkins, the latter of which won the National Book Award. Paterson is the Vice President of the National Children’s Book and Literacy Alliance and currently lives in Vermont.
Get the entire Bridge to Terabithia LitChart as a printable PDF.
"My students can't get enough of your charts and their results have gone through the roof." -Graham S.
Download 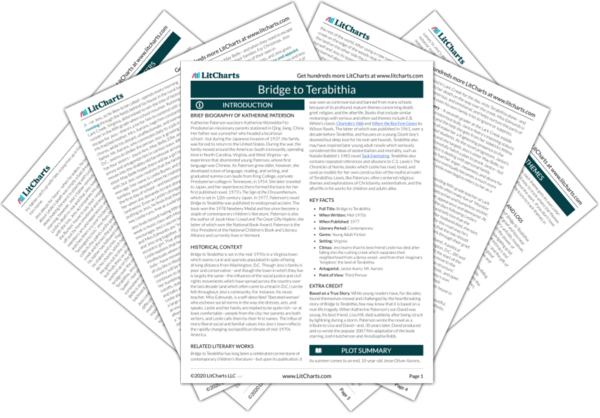 Historical Context of Bridge to Terabithia

Bridge to Terabithia is set in the mid-1970s in a Virginia town which seems rural and sparsely populated in spite of being driving distance from Washington, D.C. Though Jess’s family is poor and conservative—and though the town in which they live is largely the same—the influence of the social justice and civil rights movements which have spread across the country over the last decade (and which often came to a head in D.C.) can be felt throughout Jess’s community. For instance, his music teacher, Miss Edmunds, is a self-described “liberated woman” who eschews social norms in the way she dresses, acts, and speaks. Leslie and her family are implied to be quite rich—or at least comfortable—people from the city; her parents are both writers, and Leslie calls them by their first names. The influx of more liberal social and familial values into Jess’s town reflects the rapidly changing sociopolitical climate of mid-1970s America.

Other Books Related to Bridge to Terabithia

Bridge to Terabithia has long been a celebrated cornerstone of contemporary children’s literature—but upon its publication, it was seen as controversial and banned from many schools because of its profound, mature themes concerning death, grief, religion, and the afterlife. Books that include similar reckonings with serious and often sad themes include E.B. White’s classic Charlotte’s Web and Where the Red Fern Grows by Wilson Rawls. The latter of which was published in 1961, over a decade before Terabithia, and focuses on a young Ozark boy’s doomed but deep love for his twin pet hounds. Terabithia also may have inspired later young adult novels which seriously considered the ideas of existentialism and mortality, such as Natalie Babbitt’s 1985 novel Tuck Everlasting. Terabithia also contains repeated references and allusions to C.S. Lewis’s The Chronicles of Narnia, books which Leslie has read, loved, and used as models for her own construction of the mythical realm of Terabithia. Lewis, like Paterson, often centered religious themes and explorations of Christianity, existentialism, and the afterlife in his works for children and adults alike.
Key Facts about Bridge to Terabithia

Extra Credit for Bridge to Terabithia

Based on a True Story. While young readers have, for decades, found themselves moved and challenged by the heartbreaking story of Bridge to Terabithia, few may know that it is based on a real-life tragedy. When Katherine Paterson’s son David was young, his best friend, Lisa Hill, died suddenly after being struck by lightning during a storm. Paterson wrote the novel as a tribute to Lisa and David—and, 30 years later, David produced and co-wrote the popular 2007 film adaptation of the book starring Josh Hutcherson and AnnaSophia Robb.