In the living room of a rural Illinois farmhouse, Dodge, a sickly old man, sits on the couch watching an old television and sneaking sips of whiskey from a bottle hidden under a cushion. We hear the sounds of rain. Halie, Dodge’s wife, hears Dodge coughing from upstairs and suggests that he take some medication, but Dodge ignores her. From their separate rooms, the hostile couple argues. Halie tells Dodge that she is getting ready for a lunch with the priest Father Dewis, and that their middle son Bradley will be coming over to cut Dodge’s hair, which Dodge adamantly refuses to allow. Halie suggests that Tilden, their eldest son, will look after him.

Tilden enters, wet and muddy, holding an armful of corn. When Dodge asks where the corn came from, Tilden explains that he has just picked it in the fields out back. Dodge, certain that there has not been corn out back for decades, commands Tilden to return the corn to where he found it, but Tilden dumps the corn in Dodge’s lap.

Tilden shucks the corn, and the two men ignore Halie’s voice as she begins to reminisce. Unaware that Tilden is in the living room, she expresses both the worry and disappointment that she feels for Tilden and Bradley. Halie laments the death of her youngest son, Ansel, and as she finally enters, dressed in funeral attire, she fantasizes about memorializing him with a statue. Fully absorbed in her fantasy, she recounts Ansel’s death and blames it on his marriage into a Catholic family.

Halie notices the mess of corn and berates Tilden and accuses him of stealing. He begins to cry. Dodge comes to his defense. Halie and Dodge insult each other, but Halie is silenced when Dodge makes a puzzling comment about his flesh and blood being buried in the back yard. Halie tells Dodge to make sure that Tilden doesn’t go back to the fields, and then she leaves for her lunch.

The two men discuss the mysterious circumstances that brought Tilden back to the family home. Dodge falls asleep and Tilden covers him the cornhusks, steals his hidden bottle of whiskey, and then goes back outside. Bradley enters from the porch, wet with rain, and notices the mess. He is an amputee with a wooden leg. He limps over to the sleeping Dodge, and begins to shave his head with an electric clipper.

Later that night, the rain continues, the mess has been cleaned, and Dodge is asleep in the same position, his scalp bleeding from the haircut. On the porch, Vince and Shelly, a young couple, arrives. Shelly is incredibly amused by the pastoral setting, but Vince warns her to be serious, wanting to make a good impression on Dodge and Halie, his estranged grandparents.

They enter into the living room, and Vince heads upstairs to see if anyone is home. Dodge wakes up and startles Shelly, who explains that she is Vince’s girlfriend, and that they decided to stop by on their way to find Tilden, Vince’s father, in New Mexico. Vince comes downstairs, but Dodge is confused and does not recognize him. He reveals that Tilden is also here at the house.

Tilden enters with an armful of carrots, but also does not seem to recognize Vince. When Shelly presses him, Tilden says that his son is dead and buried in the backyard. Shelly offers to help peel the carrots, and Vince grows increasingly more confused and agitated by his family’s lack of recognition. Dodge begs Vince to go get him a bottle of alcohol, and he agrees, leaving Shelly alone with Dodge and Tilden.

Shelly continues to press Tilden about Vince, but Tilden is still unable to place Vince in his memory. Tilden admires Shelly’s fur coat, and she allows him to wear it. Tilden reveals that he did have a son but that Dodge drowned it, and no one knows where it’s buried. Shelly is horrified, and Dodge moves to stop Tilden from talking, but then falls to the floor.

Bradley enters and begins to interrogate and intimidate Shelly. Frightened, Tilden bolts off. Bradley forces Shelly to open her mouth and puts his fingers into it. He drops Shelly’s fur coat over Dodge’s collapsed body.

The next morning, the sun shines into the living room. Bradley sleeps in Dodge’s place on the couch, his wooden leg nearby, while a weak Dodge leans against the television. Shelly enters from the kitchen and offers Dodge a bowl of soup, but he refuses. Shelly believes Vince will return, but Dodge mocks her optimism. He also tells her that Bradley isn’t as frightening as he looks, and suggests that all she’d need to do to incapacitate him is throw his wooden leg away.

Shelly tells Dodge that she spent the night in Halie’s room and saw family photos featuring a mysterious baby. Shelly interrogates Dodge about the matter and he deflects her questions. Halie and Father Dewis enter. Halie now wears a yellow dress and carries a bouquet of yellow roses. They are drunk and flirtatious until they notice the scene in the living room. Embarrassed, Halie asks Father Dewis for advice, and he does not know how to respond. Halie laments the state of her family.

Bradley and Dodge fight over the blanket, and in a burst of frustration Shelly throws the bowl of soup against the door. She taunts Bradley with his prosthetic leg, while Father Dewis makes feeble attempts to get her to stop. Shelly tells the family that she was excited to meet them but they are nothing like the idyllic family Vince described, and she chides them all for keeping their gruesome secret. Despite protestations from the other family members, Dodge finally admits to the murder, explaining that Halie had a child, apparently with Tilden, and that he drowned it and buried it in the back yard.

Suddenly, Vince crashes through the screen porch in a drunken stupor. Dodge and Halie finally recognize their grandson. Halie asks Father Dewis to help with Vince, but he admits that he is unable to. As Halie laments her formerly sweet grandson’s transformation, she and Father Dewis go upstairs together.

Vince enters from the porch, and Dodge announces that he is bequeathing the house to Vince. Vince taunts a whimpering Bradley with the wooden leg. Shelly tells Vince that she is leaving. Vince explains to Shelly that he was compelled to come back to the farmhouse after having a vision of his ancestors. Shelly leaves him. Father Dewis comes downstairs and Vince tells him to leave. He throws Bradley’s wooden leg outside.

Vince notices that Dodge has died and covers him with the blanket. Tilden enters from the back yard with the corpse of the child. As he ascends the stairs, we hear Halie from upstairs, observing a field full of vegetables behind the house. 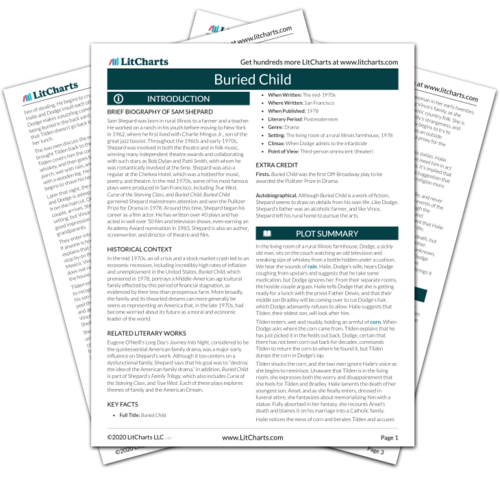 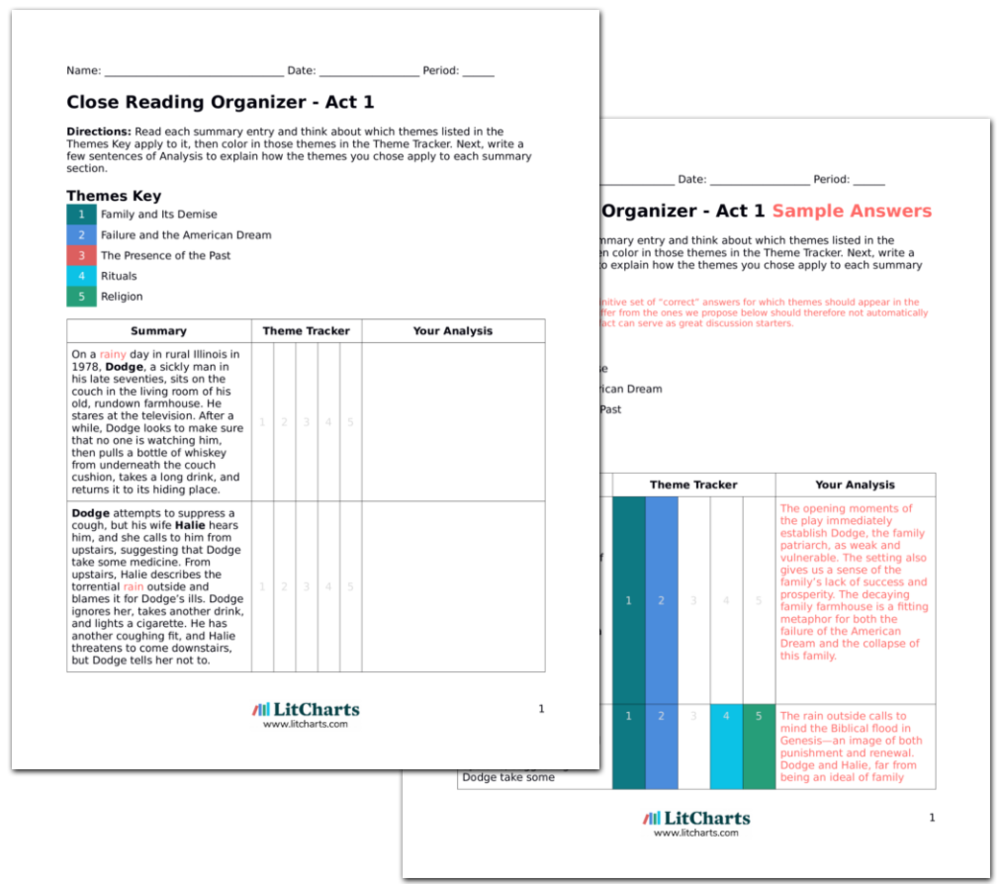