Thirteen-year-old Isabel and her five-year-old sister, Ruth, are enslaved—but Isabel believes they’ll be free, since the girls’ owner, Miss Mary Finch, has just died. Miss Finch stipulated in her will that the girls would be freed upon her death. But since the will is missing, Isabel can’t prove she’s free. Miss Finch’s nephew, Mr. Robert, takes the girls to Newport to sell them. Being enslaved, Isabel can’t even bring Ruth’s rag doll—she doesn’t own it. But she brings some seeds Momma saved, though she doesn’t know what they’ll become.

At a tavern in Newport, a wealthy Loyalist couple, Master Lockton and Madam Lockton, purchase the girls. Isabel will help in the kitchen, and since Ruth is “simple,” she’ll be “an amusement in the parlor.” Isabel is distraught: the Locktons live in New York, which means she and Ruth will have to leave behind the ghosts of their parents, Momma and Poppa, since ghosts can’t cross water.

Immediately upon arriving in New York, Isabel meets an enslaved boy, Curzon. Curzon explains that his master, Bellingham, is a Patriot—and the Patriots will free slaves. He asks Isabel to spy on the Locktons, who are Loyalists, and in exchange for information Bellingham might free Isabel and Ruth. Isabel initially refuses—she doesn’t care about the war, just about figuring out how to free and protect herself and Ruth. She begins work in the Lockton home, which is huge and lavish, and she plants her seeds in the garden. Madam is exacting and cruel. The paid maid, Becky, coaches Isabel on how to protect herself and Ruth: do exactly what Madam says.

Madam begins dressing Ruth in fancy clothes and always keeps Ruth with her. Isabel, meanwhile, manages to make Ruth a new doll out of cornhusks. One day, Isabel is called to introduce herself to Lady Seymour, Lockton’s wealthy aunt. Upon learning Isabel’s name at this point, Madam renames Isabel Sal. Isabel is then called to serve Lockton and his friends—and she discovers that Lockton has a chest of money that he plans to use to bribe Patriots. Isabel passes this information to Curzon, but when Bellingham comes to look for the money, he can’t find it.

Weeks later, Isabel hears that Lockton and his friends are plotting to assassinate General Washington. Then, Ruth has a seizure in front of Madam. Madam believes Ruth is possessed by demons and threatens to sell her, so Isabel takes a list of those involved in the plot to kill Washington to the Patriot Captain Regan. He promises to help Isabel. Though the Patriots hang a man for his involvement in the plot, Lockton escapes the city, and Madam continues to threaten Ruth.

Soon after, British ships drop anchor in the harbor. Madam is thrilled—and one night, she decides it’s time to change how she treats Isabel and Ruth. Isabel gets home from running errands to the news that Ruth is back serving Madam in the parlor. Madam made gingerbread and spiced milk for Isabel and served the same to Ruth earlier. Isabel enjoys her treat and falls fast asleep. When she wakes up the next morning, she finds Becky has been crying—and discovers that Madam drugged Isabel and Ruth so she could sell Ruth. Isabel confronts Madam on the stairs, but Madam hits Isabel with a painting, and Isabel runs away. She runs straight to Captain Regan, but when Madam arrives moments later and demands Isabel, Regan says he can’t help.

Isabel then runs to the Patriot fort—but when Madam comes looking for her, Isabel leaps out the window to escape and loses consciousness due to the impact. She’s drug through the streets and jailed for several days, and then she stands trial. Madam lies to the judge about what happened, but he believes her and agrees to punish Isabel by branding her cheek with an I for “insolent.” Men lock Isabel in the stocks and brand her cheek, and Momma and Poppa’s ghosts comfort Isabel’s pain with their tears.

Six days later, Isabel wakes up in an attic bedroom at Lady Seymour’s house, where the lady explains that Isabel contracted a serious fever while imprisoned and in the stocks. Curzon fetched the lady, who insisted on bringing Isabel to her house to recover. But Lady Seymour can’t keep Isabel; she returns her to Madam.

The next few weeks pass in a blur. Isabel feels like she has a hive of angry bees living in her; they keep her from remembering Ruth or from thinking too hard about anything. Curzon continues to ask Isabel to spy, but she tells him to leave her alone. Not long after, the British win an important battle and invade New York—and rumor has it that the British are willing to free enslaved people. Curzon, who is now an American soldier, insists enslaved people should nevertheless support the Patriot cause. But when Madam sends Isabel to shop for a celebratory dinner, Isabel seeks out a British captain, Captain Campbell, and offers to work for him. When he learns that Isabel’s owners are Loyalists, though, he reveals he can’t free her: the British will only free enslaved people owned by Patriots. Master Lockton comes to shore soon after Captain Campbell, since New York is safe for him again now that the British hold the island. Becky vanishes at this time, so Isabel is the only staff left at the Locktons’ home.

The British require Loyalists in New York to house soldiers—and since Lady Seymour took in a dozen Hessians compared to the Locktons’ two British soldiers (and recently had her maids quit), she requests that Isabel work at her house. Isabel takes Ruth’s doll with her. One night, Isabel wakes up and the city is on fire. She tries to bring the doll out of the house with her, but Lady Seymour begs for help saving her own precious belongings. Isabel is able to save Lady Seymour and several of the lady’s things, but not the doll. Following this, Lady Seymour becomes extremely ill and moves in with the Locktons.

The Locktons take in five more soldiers whose wives are in the Colonies with them, so a pregnant woman named Sarah takes over as boss in the kitchen. Isabel discovers that her seedlings died at about the same time as the British win another battle and take thousands of men prisoner—including Curzon. To celebrate the win, Madam throws an elaborate banquet. Isabel saves the scraps, and a few days later, she sneaks them to the prison. She discovers that Curzon is injured and ill, but alive. From then on, Isabel visits the prison daily. Lady Seymour catches onto this fact and warns Isabel that while she has no problem with Isabel doing this, Madam will not be pleased if she finds out.

Just before Christmas, Isabel runs some errands for Lady Seymour, and a stationer catches on to the fact that she can read. He gives Isabel a copy of Thomas Paine’s political pamphlet Common Sense, which Isabel sneakily reads by the fire late at night. She also discovers that Curzon’s cellmates are stealing his rations and blankets, so she strikes a deal with a Private Dibdin to bring food and carry messages to their captain, Captain Morse, if they ensure Curzon gets medical attention. Though Isabel is supposed to get Christmas day off, Madam makes her work well into the afternoon. Isabel thinks of Momma and decides to follow Momma’s advice to “keep Christmas” by baking a bread pudding for a houseless family. This helps Isabel feel more at peace.

Two days after Christmas, Isabel carries a loaf of bread with a message hidden in it to the prison—General Washington won a surprise victory on Christmas Day. The Patriots win another battle just after New Year’s Day. Master Lockton leaves on a ship for England to tell the king the bad news. Not long after this, Lady Seymour—who is again gravely ill—asks Isabel to sit with her. She reveals that she tried to buy Isabel and Ruth to save them from Madam’s abuse, clearly expecting this to make Isabel feel grateful. Isabel isn’t grateful, though—she doesn’t want to be bought and sold.

Queen Charlotte’s birthday is coming up, and there’s going to be a grand ball in her honor. Madam begins preparing by ordering a dress, and Isabel continues to read Common Sense in secret, finishing it the night before the ball. Isabel knows the words are dangerous—but she can’t bring herself to burn the book. On the day of the ball, Isabel agrees to take a penny to a Captain Farrar for Captain Morse, which is payment for a bet Morse lost. Farrar asks Isabel to take a note back to Morse for him, but Isabel is too busy to deliver the note. When Isabel gets back to the Locktons’, Madam beats her with a riding crop—a friend saw Isabel speaking to Captain Farrar. Isabel throws the note in the fire rather than hand it over, so Madam has one of the soldier’s wives lock Isabel in the potato bin. Madam also reveals that she couldn’t sell Ruth; Ruth is actually on the Lockton estate in Charleston, South Carolina.

Once Madam leaves for the ball and the house is quiet, Isabel kicks out of the bin. She’s going to rescue Ruth. Isabel steals a map of the Colonies and, for the first time in a long time, sees her reflection in a mirror. She realizes she looks like Momma and like Poppa—and that her scar makes her who she is. The I, she decides, stands for Isabel; and when she forges a pass for herself, she decides her last name is Gardener. Isabel stokes Lady Seymour’s fire just before she leaves. The lady lets Isabel take money, and she tells Isabel to run.

Isabel decides she can’t leave without rescuing Curzon too, so she tells the guard she’s come to clean out cells. Curzon is very weak and ill, so it’s not hard to pretend he’s dead and sneak him out of the prison and into a rowboat at the wharf. Isabel rows them across the river and sees figures in the mist—ghosts can move across water. She passes out, and when she wakes in the morning, she sees New York behind her. She and Curzon are free. 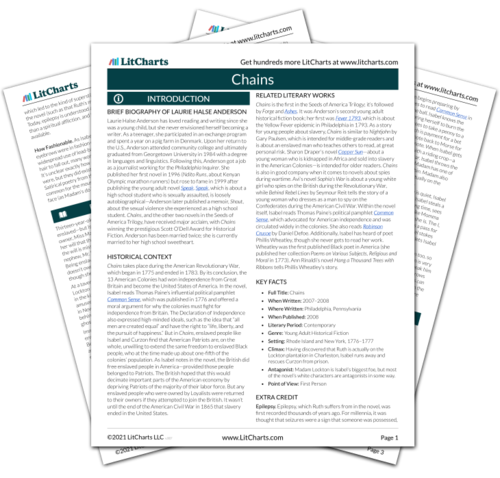 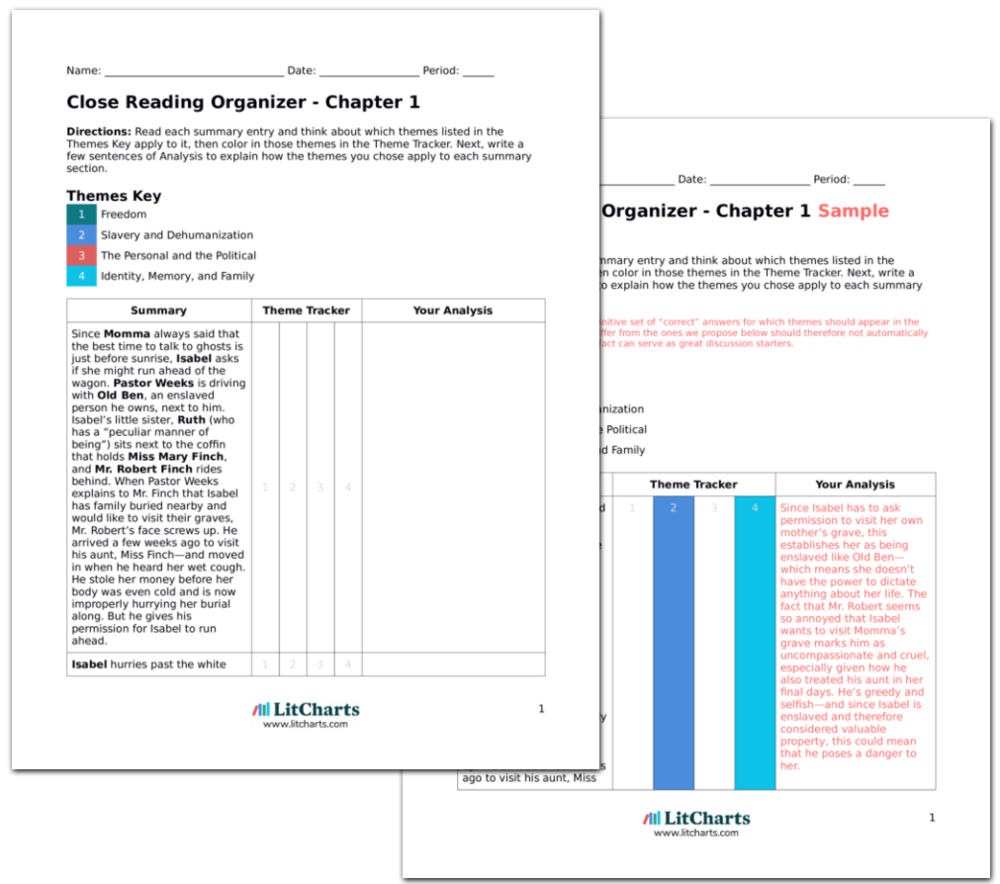