Chickamauga
Introduction + Context
Plot Summary
Detailed Summary & Analysis
Chickamauga
Themes
All Themes Fantasy of War vs. Reality of War Humanity vs. Nature Reality vs. Imagination
Quotes
Characters
All Characters The Child The Soldiers The Mother The Father The Slaves The Narrator
Symbols
All Symbols The Toy Sword

Download this LitChart! (PDF)
Teachers and parents! Struggling with distance learning? Our Teacher Edition on Chickamauga can help.

Welcome to the LitCharts study guide on Ambrose Bierce's Chickamauga. Created by the original team behind SparkNotes, LitCharts are the world's best literature guides.

A concise biography of Ambrose Bierce plus historical and literary context for Chickamauga.

A quick-reference summary: Chickamauga on a single page.

In-depth summary and analysis of every of Chickamauga. Visual theme-tracking, too.

Explanations of Chickamauga's symbols, and tracking of where they appear.

An interactive data visualization of Chickamauga's plot and themes.

Ambrose Bierce was the tenth of thirteen children born to a pair of poor but literary parents who encouraged his love of books and writing. Bierce attended school in Indiana and, at the age of 15, he became an apprentice at a small abolitionist newspaper, The Northern Indianan. He briefly attended the Kentucky Military Institute before it burned down. In April 1861, just three weeks after the Civil War began, Bierce enlisted in the Union Army at the age of 19. Originally, he enlisted for three months’ service, but he ended up reenlisting for three years and participating in several major battles, including Shiloh and Chickamauga. After a traumatic brain injury at the Battle of Kennesaw Mountain, Bierce was discharged from the army in January 1865. He experienced lifelong complications from his war wounds. Several of Bierce’s works of fiction, including “Chickamauga,” appear to have been influenced by his real-life experiences in battle. Bierce married Mary Ellen Day in 1871, and they had three children together. Two of these children died before Bierce did (one by suicide, and one by pneumonia). Bierce and his wife separated in 1888 after he discovered a compromising letter from an admirer of hers, and they divorced in 1904. Bierce had a career in journalism and, during his lifetime, was better-known for his journalism than for his fiction. Many of his most famous stories were written between 1888 and 1891, and many were influenced by his experience as a soldier. He is now well-known for both his war stories and his horror stories. In December 1913, Bierce traveled to Chihuahua, Mexico, where the Mexican Revolution was taking place. He was rumored to have been traveling with rebel troops, but he was never seen again.
Get the entire Chickamauga LitChart as a printable PDF.
"My students can't get enough of your charts and their results have gone through the roof." -Graham S.
Download 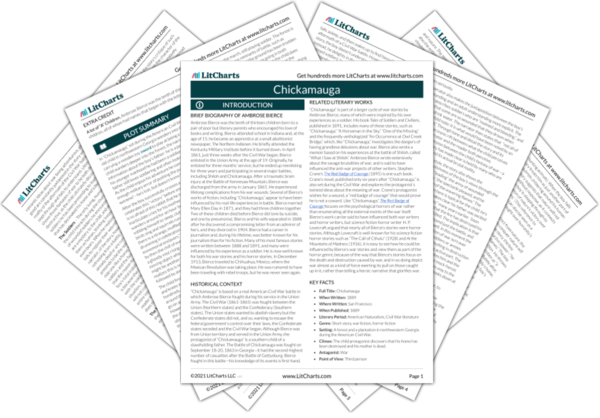 “Chickamauga” is based on a real American Civil War battle in which Ambrose Bierce fought during his service in the Union Army. The Civil War (1861-1865) was fought between the Union (Northern states) and the Confederacy (Southern states). The Union states wanted to abolish slavery but the Confederate states did not, and so, wanting to escape the federal government’s control over their laws, the Confederate states seceded and the Civil War began. Although Bierce was from Union territory and served in the Union Army, the protagonist of “Chickamauga” is a southern child of a slaveholding father. The Battle of Chickamauga was fought on September 18-20, 1863 in Georgia—it had the second-highest number of casualties after the Battle of Gettysburg. Bierce fought in this battle—his knowledge of its events is first-hand.

Other Books Related to Chickamauga

“Chickamauga” is part of a larger cycle of war stories by Ambrose Bierce, many of which were inspired by his own experiences as a soldier. His book Tales of Soldiers and Civilians, published in 1891, includes many of these stories, such as “Chickamauga,” “A Horseman in the Sky,” “One of the Missing,” and the frequently-anthologized “An Occurrence at Owl Creek Bridge,” which, like “Chickamauga,” investigates the dangers of having grandiose delusions about war. Bierce also wrote a memoir based on his experiences at the battle of Shiloh, called “What I Saw at Shiloh.” Ambrose Bierce wrote extensively about the savage brutalities of war, and is said to have influenced the anti-war projects of other writers. Stephen Crane’s The Red Badge of Courage (1895) is one such book. Crane’s novel, published only six years after “Chickamauga,” is also set during the Civil War and explores the protagonist’s twisted ideas about the meaning of war. Crane’s protagonist wishes for a wound, a “red badge of courage” that would prove he is not a coward. Like “Chickamauga,” The Red Badge of Courage focuses on the psychological horrors of war rather than enumerating all the external events of the war itself. Bierce’s work can be said to have influenced both war writers and horror writers, but science fiction horror writer H. P. Lovecraft argued that nearly all of Bierce’s stories were horror stories. Although Lovecraft is well-known for his science fiction horror stories such as “The Call of Cthulu” (1928) and At the Mountains of Madness (1936), it is easy to see how he could be influenced by Bierce’s war stories and view them as part of the horror genre, because of the way that Bierce’s stories focus on the death and destruction caused by war, and in so doing depict war almost as a kind of force exerting its pull on those caught up in it, rather than telling a heroic narrative that glorifies war.
Key Facts about Chickamauga

A lot of “A” Children. Ambrose Bierce was the tenth of thirteen children, all of whom had names that began with the letter “A.” 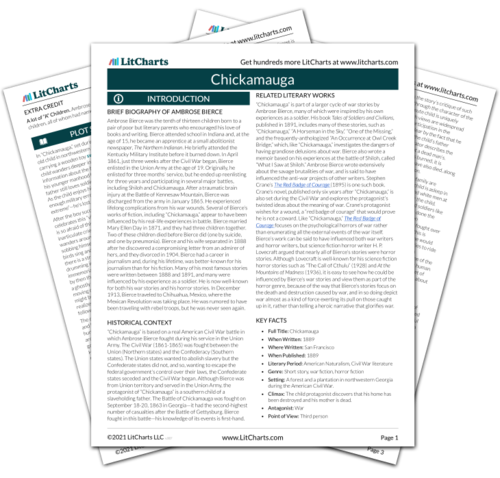 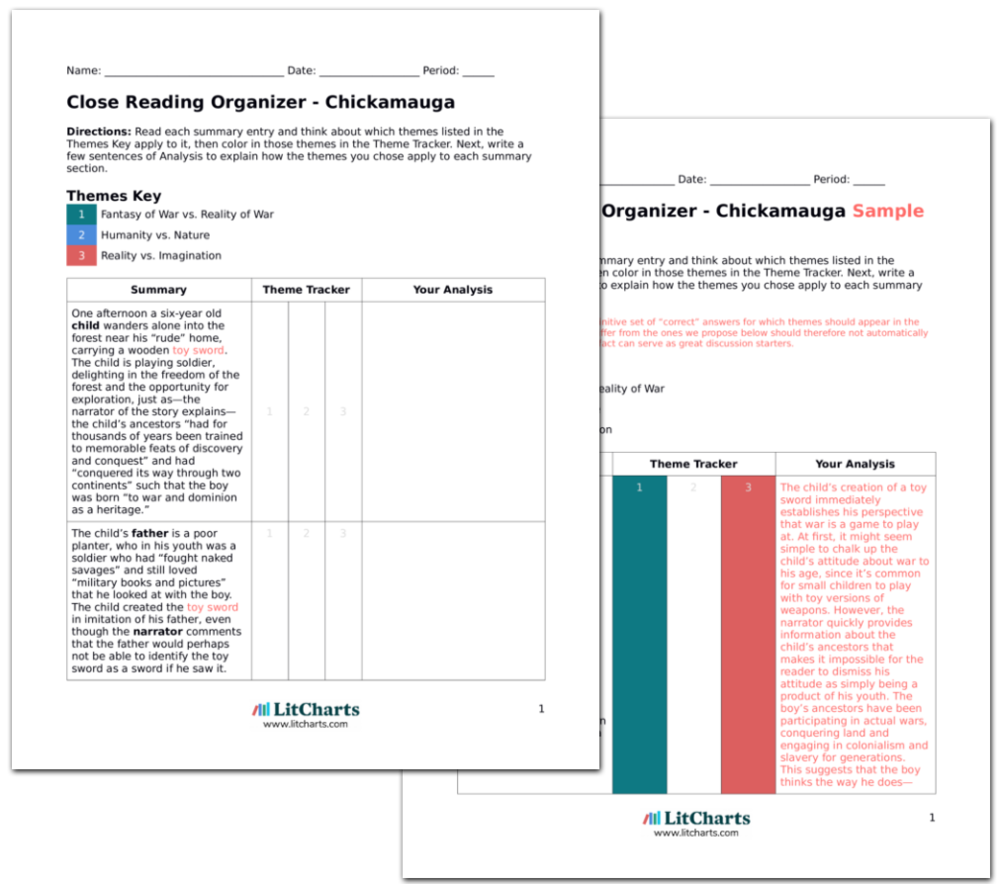