Download this LitChart! (PDF)
Teachers and parents! Struggling with distance learning? Our Teacher Edition on Counterparts can help.

Welcome to the LitCharts study guide on James Joyce's Counterparts. Created by the original team behind SparkNotes, LitCharts are the world's best literature guides.

A concise biography of James Joyce plus historical and literary context for Counterparts.

A quick-reference summary: Counterparts on a single page.

In-depth summary and analysis of every of Counterparts. Visual theme-tracking, too.

Explanations of Counterparts's symbols, and tracking of where they appear.

An interactive data visualization of Counterparts's plot and themes.

James Joyce was the firstborn in a large and impoverished Catholic family of eight children. He was sent at a young age to Clongowes Academy, a school run by the strict Catholic order of the Jesuits. He excelled, and at 18 years of age went up to University College, Dublin, and then on to Paris where he attempted to study medicine, though he eventually dropped out and began living the life of an aspiring bohemian writer. It was in Paris that he began work on Dubliners, his collection of stories about the everyday lives of Dublin’s inhabitants, which wouldn’t be published until 1914. In 1902, he met Nora Barnacle, with whom he would spend the rest of his life. That life was characterized by exile, flight, and wandering, principally between the cities of Paris, Trieste, and Zurich. Forever poor, Joyce found work where he could—as a teacher, a bank clerk, even as a cinema manager. All the while, he worked on his various literary projects, revising Dubliners, writing his autobiographical work A Portrait of The Artist as a Young Man, and gathering material for what would be his most astonishing and enduring achievement, the novel Ulysses. As his work filtered through magazines, his reputation grew, until, with the publication of Ulysses, he became one of the most famous writers in the world. His final work was the polarizing Finnegans Wake, which took Joyce’s experimental style to maddening heights. When Joyce died in 1941, his reputation as one of the most important writers of the 20th century was secure.
Get the entire Counterparts LitChart as a printable PDF.
"My students can't get enough of your charts and their results have gone through the roof." -Graham S.
Download 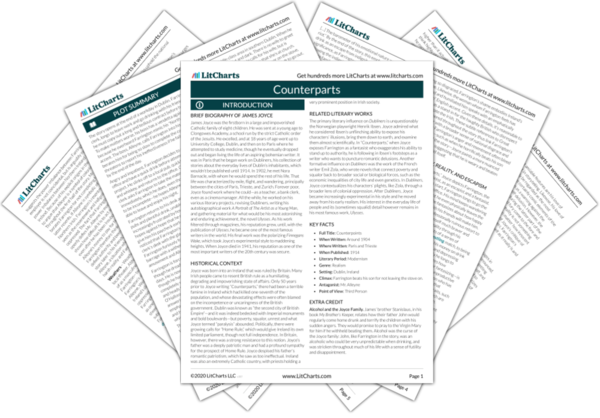 Joyce was born into an Ireland that was ruled by Britain. Many Irish people came to resent British rule as a humiliating, degrading and impoverishing state of affairs. Only 50 years prior to Joyce writing “Counterparts,” there had been a terrible famine in Ireland which had killed one-seventh of the population, and whose devastating effects were often blamed on the incompetence or uncaringness of the British government. Dublin was known as “the second city of British Empire”—and it was indeed bedecked with Imperial monuments and bold boulevards—but poverty, squalor, unrest and what Joyce termed “paralysis” abounded. Politically, there were growing calls for “Home Rule,” which would give Ireland its own limited parliament, though not full independence. In Britain, however, there was a strong resistance to this notion. Joyce’s father was a deeply patriotic man and had a profound sympathy for the prospect of Home Rule. Joyce despised his father’s romantic patriotism, which he saw as too ineffectual. Ireland was also an extremely Catholic country, with priests holding a very prominent position in Irish society.

Other Books Related to Counterparts

The primary literary influence on Dubliners is unquestionably the Norwegian playwright Henrik Ibsen. Joyce admired what he considered Ibsen’s unflinching ability to expose his characters’ illusions, bring them down to earth, and examine them almost scientifically. In “Counterparts,” when Joyce exposes Farrington as a fantasist who exaggerates his ability to stand up to authority, he is following in Ibsen’s footsteps as a writer who wants to puncture romantic delusions. Another formative influence on Dubliners was the work of the French writer Emil Zola, who wrote novels that connect poverty and squalor back to broader social or biological forces, such as the economic inequalities of city life and even genetics. In Dubliners, Joyce contextualizes his characters’ plights, like Zola, through a broader lens of colonial oppression. After Dubliners, Joyce became increasingly experimental in his style and he moved away from his early realism. His interest in the everyday life of people and its (sometimes squalid) detail however remains in his most famous work, Ulysses.
Key Facts about Counterparts

Alcohol and the Joyce Family. James’ brother Stanislaus, in his book My Brother’s Keeper, relates how their father John would regularly come home drunk and terrify the children with his sudden angers. They would promise to pray to the Virgin Mary for him if he withheld beating them. Alcohol was the curse of the Joyce family: John, like Farrington in the story, was an alcoholic who could be very unpredictable when drinking, and was stricken throughout much of his life with a sense of futility and disappointment. 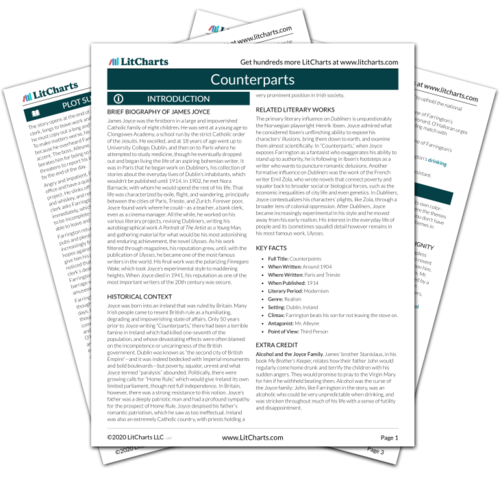 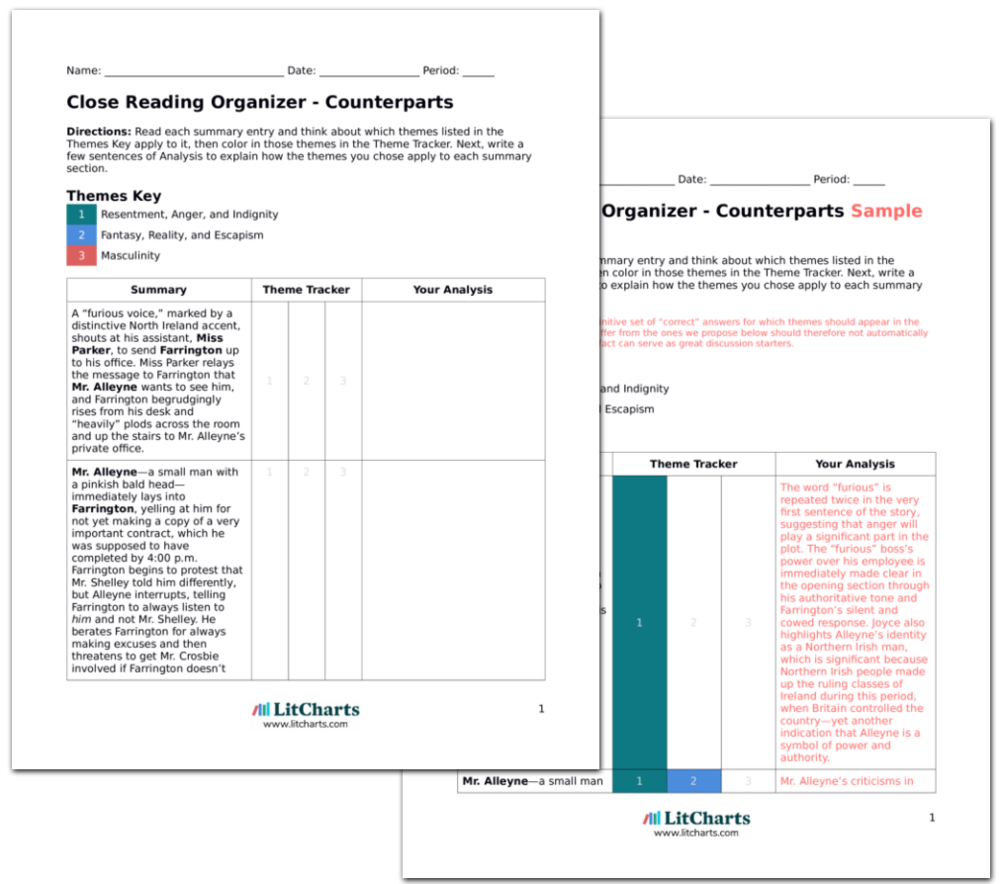