Download this LitChart! (PDF)
Teachers and parents! Struggling with distance learning? Our Teacher Edition on Ulysses can help.

Welcome to the LitCharts study guide on James Joyce's Ulysses. Created by the original team behind SparkNotes, LitCharts are the world's best literature guides.

A concise biography of James Joyce plus historical and literary context for Ulysses.

A quick-reference summary: Ulysses on a single page.

In-depth summary and analysis of every chapter of Ulysses. Visual theme-tracking, too.

Explanations of Ulysses's symbols, and tracking of where they appear.

An interactive data visualization of Ulysses's plot and themes.

James Joyce grew up in a middle-class, nationalist, Catholic family in Dublin. He was the eldest of 12 siblings, and he saw his family gradually fall into poverty after his father declared bankruptcy and lost his job due to his alcoholism. Still, Joyce managed to attend two different private Jesuit schools, then go on to study English, French, and Italian at University College Dublin. In 1902, he moved to Paris to study medicine, hoping that a career as a doctor would give him the financial stability he needed to become a writer. This plan failed: Joyce quickly gave up on medicine and started spending all his time reading in the library instead. When his mother developed cancer, he had to return suddenly to Ireland. Since he no longer believed in God, he refused to pray at her deathbed. Over the next two years, he struggled to survive in Dublin and watched his family fall apart. The character of Stephen Dedalus is based on these years in Joyce’s life. On June 16, 1904—the day when Ulysses is set—Joyce met the chambermaid Nora Barnacle who would become his wife. A few months later, after Joyce got into a drunken fight in a Dublin park, a good-humored Jewish man named Alfred H. Hunter brought him home and took care of him. After this incident, Joyce briefly moved into the Sandycove Martello tower, but quickly departed after his roommate nearly shot him. He and Nora decided to leave Ireland forever. They first moved to Zurich, and then to Trieste, where Joyce taught English for most of the next decade. Joyce occasionally returned to Ireland, helped many of his siblings move to other parts of Europe, and tried (and failed) to start a number of businesses. He moved back to Zurich during World War I and then on to Paris after the war, where he published Ulysses in 1922. Despite nearly going blind, he dedicated the rest of his life to writing Finnegans Wake. During World War II, he returned to Zurich, and he died there due to complications from a stomach surgery in 1941.
Get the entire Ulysses LitChart as a printable PDF.
"My students can't get enough of your charts and their results have gone through the roof." -Graham S.
Download 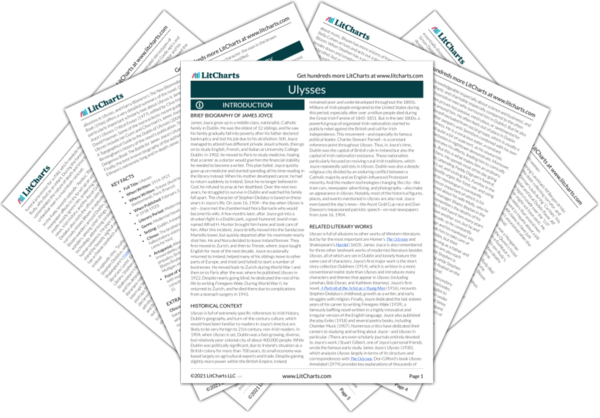 Ulysses is full of extremely specific references to Irish history, Dublin’s geography, and turn-of-the-century culture, which would have been familiar to readers in Joyce’s time but are likely to be very foreign to 21st-century, non-Irish readers. In 1904, when Ulysses is set, Dublin was a fast-growing, diverse, but relatively poor colonial city of about 400,000 people. While Dublin was politically significant, due to Ireland’s situation as a British colony for more than 700 years, its small economy was based largely on agricultural exports and trade. Despite gaining slightly more power within the British Empire, Ireland remained poor and underdeveloped throughout the 1800s. Millions of Irish people emigrated to the United States during this period, especially after over a million people died during the Great Irish Famine of 1845-1851. But in the late 1800s, a powerful group of organized Irish nationalists started to publicly rebel against the British and call for Irish independence. This movement—and especially its famous political leader, Charles Stewart Parnell—is a constant reference point throughout Ulysses. Thus, in Joyce’s time, Dublin was the capital of British rule in Ireland but also the capital of Irish nationalist resistance. These nationalists particularly focused on reviving rural Irish traditions, which Joyce repeatedly satirizes in Ulysses. Dublin was also a deeply religious city divided by an enduring conflict between a Catholic majority and an English-influenced Protestant minority. And the modern technologies changing the city—like tram cars, newspaper advertising, and photography—also make an appearance in Ulysses. Notably, most of the historical figures, places, and events mentioned in Ulysses are also real. Joyce even based the day’s news—the Ascot Gold Cup race and Dan Dawson’s impassioned patriotic speech—on real newspapers from June 16, 1904.

Other Books Related to Ulysses

Ulysses is full of allusions to other works of Western literature, but by far the most important are Homer’s The Odyssey and Shakespeare’s Hamlet (1603). James Joyce is also remembered for three other landmark works of modernist literature besides Ulysses, all of which are set in Dublin and loosely feature the same cast of characters. Joyce’s first major work is the short story collection Dubliners (1914), which is written in a more conventional realist style than Ulysses and introduces many characters and themes that appear in Ulysses (including Lenehan, Bob Doran, and Kathleen Kearney). Joyce’s first novel, A Portrait of the Artist as a Young Man (1916), recounts Stephen Dedalus’s childhood, growth as a writer, and early struggles with religion. Finally, Joyce dedicated the last sixteen years of his career to writing Finnegans Wake (1939), a famously baffling novel written in a highly innovative and irregular version of the English language. Joyce also published the play Exiles (1918) and several poetry books, including Chamber Music (1907). Numerous critics have dedicated their careers to studying and writing about Joyce—and Ulysses in particular. (There are even scholarly journals entirely devoted to Joyce’s work.) Stuart Gilbert, one of Joyce’s personal friends, wrote the famous early study James Joyce’s Ulysses (1930), which analyzes Ulysses largely in terms of its structure and correspondences with The Odyssey. Don Gifford’s book Ulysses Annotated (1974) provides key explanations of thousands of allusions in Ulysses, and Harry Blamires’s The New Bloomsday Book (1966) offers a very detailed summary of the novel. One particularly important scholarly text about Ulysses is James Joyce’s Ulysses: Critical Essays (1977), edited by Clive Hart and David Hayman. Some of the more eclectic recent guides to Ulysses include Ian Gunn and Clive Hart’s James Joyce’s Dublin: A Topographical Guide to the Dublin of Ulysses (2004) and Kevin Birmingham’s history of the novel’s publication, The Most Dangerous Book: The Battle for James Joyce’s Ulysses (2014). Finally, the best-known biography of the author is Richard Ellmann’s extremely long and in-depth James Joyce (1959).
Key Facts about Ulysses

Where is Joyce? Although virtually all of the characters in Ulysses are based on real people, critics have argued at length about who in the novel (if anyone) represents James Joyce himself. While Stephen Dedalus certainly represents Joyce in his youth and Leopold Bloom represents certain dimensions of Joyce’s adult persona (like his wild business schemes), other critics have suggested that he is really embodied in a more obscure, mysterious character: the man in the brown macintosh, who is never identified. 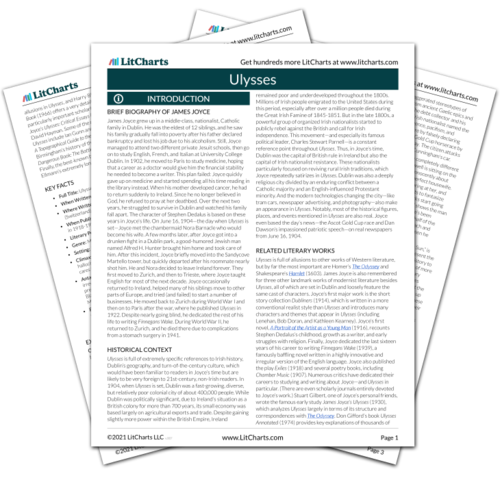 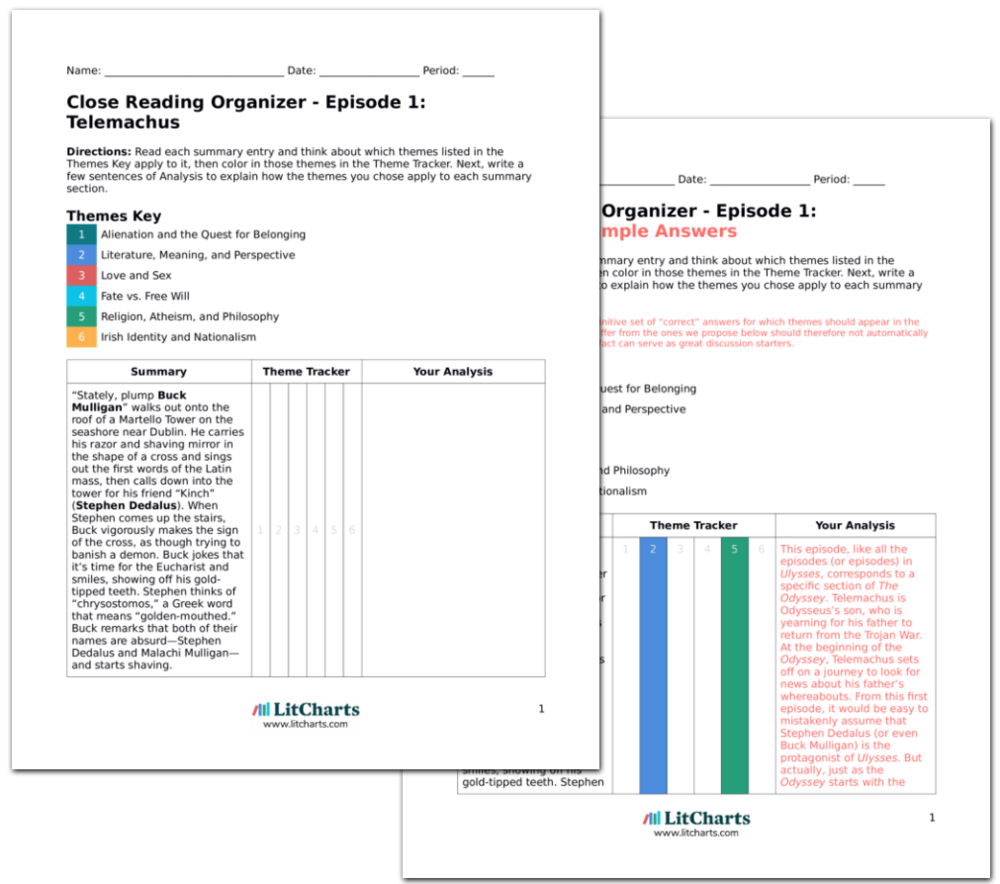