Download this LitChart! (PDF)
Teachers and parents! Struggling with distance learning? Our Teacher Edition on Crow Country can help.

Welcome to the LitCharts study guide on Kate Constable's Crow Country. Created by the original team behind SparkNotes, LitCharts are the world's best literature guides.

A concise biography of Kate Constable plus historical and literary context for Crow Country.

A quick-reference summary: Crow Country on a single page.

In-depth summary and analysis of every chapter of Crow Country. Visual theme-tracking, too.

Explanations of Crow Country's symbols, and tracking of where they appear.

An interactive data visualization of Crow Country's plot and themes.

Born in Australia, Kate Constable moved with her family to Papua New Guinea as a child, when her father was relocated there to work as a pilot. In Papua New Guinea, Kate had no access to television, and spent her time reading instead. It was during this period that her love of literature and writing developed. She returned to Australia to study law and arts at the University of Melbourne. After finishing university, she worked for several years at a record company, even as she began to establish a writing career as an author of children’s books and young adult literature. Her first books were The Singer of All Songs (2002), The Waterless Sea (2003), and The Tenth Power (2005).
Get the entire Crow Country LitChart as a printable PDF.
"My students can't get enough of your charts and their results have gone through the roof." -Graham S.
Download 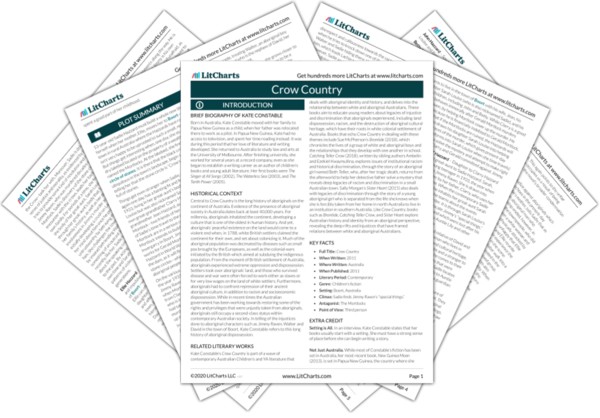 Central to Crow Country is the long history of Aboriginals on the continent of Australia. Evidence of the presence of Aboriginal society in Australia dates back at least 40,000 years. For millennia, Aboriginals inhabited the continent, developing a culture that is one of the oldest in human history. And yet, Aboriginals’ peaceful existence on the land would come to a violent end when, in 1788, white British settlers claimed the continent for their own, and set about colonizing it. Much of the Aboriginal population was decimated by diseases such as small pox brought by the Europeans, as well as the colonial wars initiated by the British which aimed at subduing the indigenous population. From the moment of British settlement of Australia, Aboriginals experienced extreme oppression and dispossession. Settlers took over Aboriginals’ land, and those who survived disease and war were often forced to work either as slaves or for very low wages on the land of white settlers. Furthermore, Aboriginals had to confront repression of their ancient Aboriginal culture, in addition to racism and socioeconomic dispossession. While in recent times the Australian government has been working towards restoring some of the rights and privileges that were unjustly taken from Aboriginals, Aboriginals still occupy a second-class status within contemporary Australian society. In telling of the injustices done to Aboriginal characters such as Jimmy Raven, Walter and David in the town of Boort, Kate Constable refers to this long history of Aboriginal dispossession.

Other Books Related to Crow Country

Kate Constable’s Crow Country is part of a wave of contemporary Australian Children’s and YA literature that deals with Aboriginal identity and history, and delves into the relationship between white and Aboriginal Australians. These books aim to educate young readers about legacies of injustice and discrimination that Aboriginals experienced, including land dispossession, racism, and the destruction of Aboriginal cultural heritage, which have their roots in white colonial settlement of Australia. Books that echo Crow Country in dealing with these themes include Sue McPherson’s Brontide (2018), which chronicles the lives of a group of white and Aboriginal boys and the relationships that they develop with one another in school. Catching Teller Crow (2018), written by sibling authors Ambelin and Ezekiel Kwaymullina, explores issues of institutional racism and historical discrimination, through the story of an Aboriginal girl named Beth Teller, who, after her tragic death, returns from the afterworld to help her detective father solve a mystery that reveals deep legacies of racism and discrimination in a small Australian town. Sally Morgan’s Sister Heart (2015) also deals with legacies of discrimination through the story of a young Aboriginal girl who is separated from the life she knows when she is forcibly taken from her home in north Australia to live in an institution in southern Australia. Like Crow Country, books such as Brontide, Catching Teller Crow, and Sister Heart explore Australian history and identity from an Aboriginal perspective, revealing the deep rifts and injustices that have framed relations between white and Aboriginal Australians.
Key Facts about Crow Country

Setting is All. In an interview, Kate Constable states that her books usually start with a setting. She must have a strong sense of place before she can begin writing a story.

Not Just Australia. While most of Constable’s fiction has been set in Australia, her most recent book, New Guinea Moon (2013), is set in Papua New Guinea, the country where she spent a good part of her childhood. 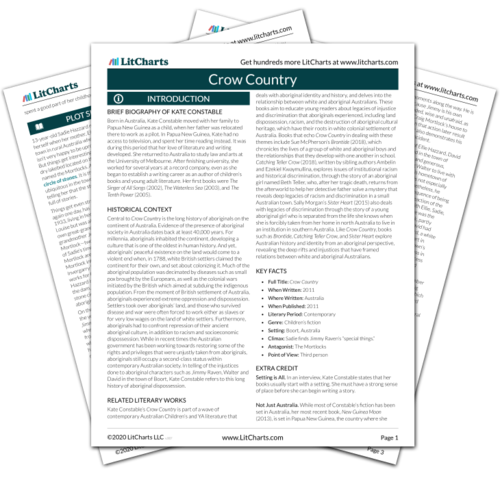 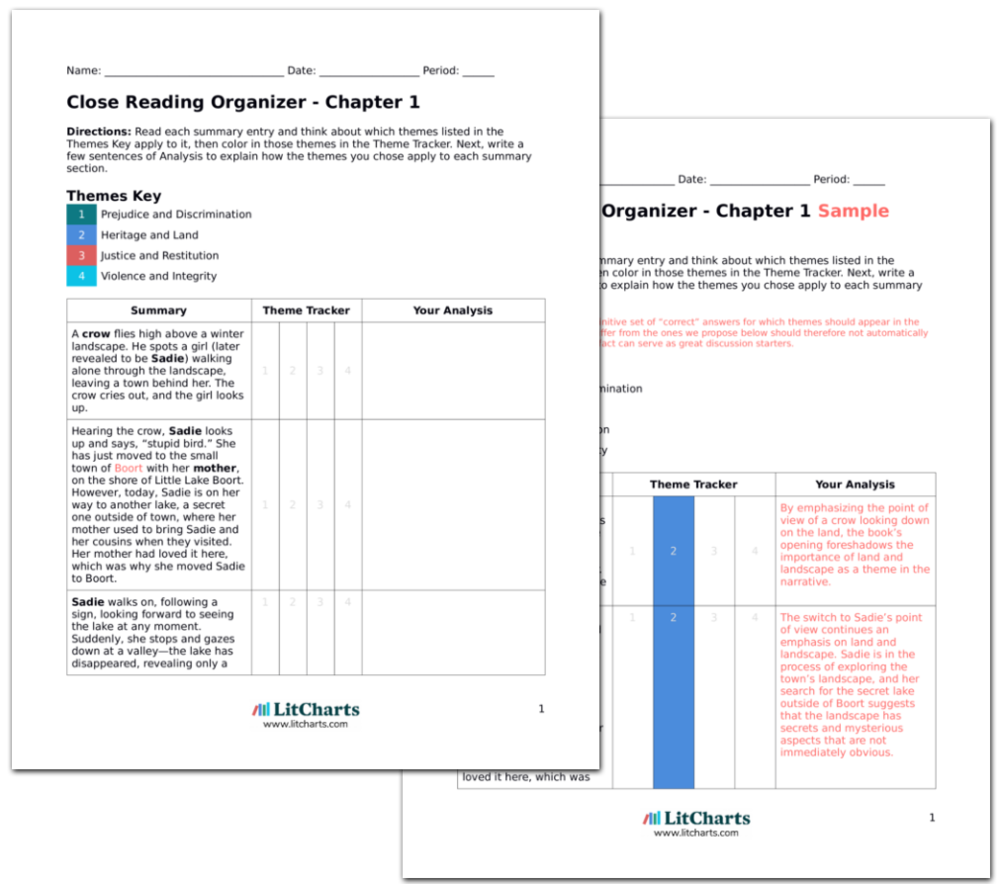