Download this LitChart! (PDF)
Teachers and parents! Struggling with distance learning? Our Teacher Edition on Enuma Elish can help.

Welcome to the LitCharts study guide on Anonymous's Enuma Elish. Created by the original team behind SparkNotes, LitCharts are the world's best literature guides.

A concise biography of Anonymous plus historical and literary context for Enuma Elish.

A quick-reference summary: Enuma Elish on a single page.

In-depth summary and analysis of every tablet of Enuma Elish. Visual theme-tracking, too.

Explanations of Enuma Elish's symbols, and tracking of where they appear.

An interactive data visualization of Enuma Elish's plot and themes.

Though the names of scribes who copied the text of the Enuma Elish are preserved on the recovered tablets, the identity of the original author is nowhere recorded. Most often, those with the training to write texts in the ancient Babylonian context would have been priests.
Get the entire Enuma Elish LitChart as a printable PDF.
"My students can't get enough of your charts and their results have gone through the roof." -Graham S.
Download it! 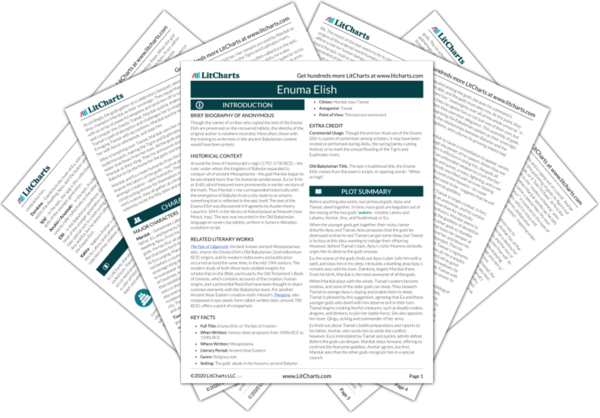 Around the time of Hammurabi’s reign (1792-1750 BCE)—the ruler under whom the kingdom of Babylon expanded to conquer all of ancient Mesopotamia—the god Marduk began to be worshiped more than his Sumerian predecessor, Ea (or Enki or Enlil), who’d featured more prominently in earlier versions of the myth. Thus Marduk’s rise corresponded historically with the emergence of Babylon from a city-state to an empire, something that is reflected in the epic itself. The text of the Enuma Elish was discovered in fragments by Austen Henry Layard in 1849, in the library of Ashurbanipal at Nineveh (now Mosul, Iraq). The epic was recorded in the Old Babylonian language on seven clay tablets, written in Sumero-Akkadian cuneiform script.

Other Books Related to Enuma Elish

The Epic of Gilgamesh, the best-known ancient Mesopotamian epic, shares the Enuma Elish’s Old Babylonian (2nd millennium BCE) origins, and its modern rediscovery and publication occurred around the same time, in the mid-19th century. The modern study of both these texts yielded insights for scholarship on the Bible, particularly the Old Testament’s Book of Genesis, which contains accounts of the creation, human origins, and a primordial flood that have been thought to share common elements with the Babylonian texts. For another Ancient Near Eastern creation myth, Hesiod’s Theogony, also composed in epic poetic form (albeit written later, around 700 BCE), offers a point of comparison.
Key Facts about Enuma Elish

Ceremonial Usage. Though the precise ritual use of the Enuma Elish is a point of contention among scholars, it may have been recited or performed during Akitu, the spring barley-cutting festival, or to mark the annual flooding of the Tigris and Euphrates rivers.

Old Babylonian Title. The epic’s traditional title, the Enuma Elish, comes from the poem’s incipit, or opening words: “When on high.” 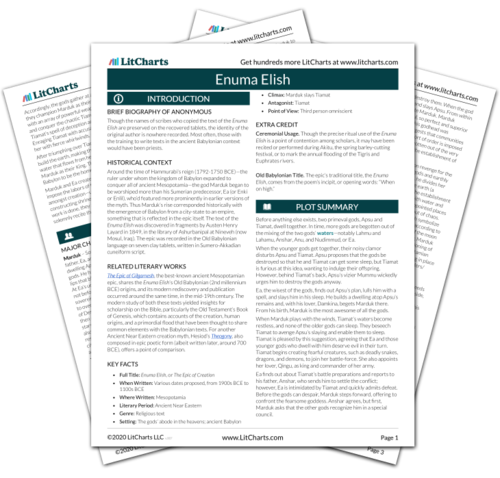 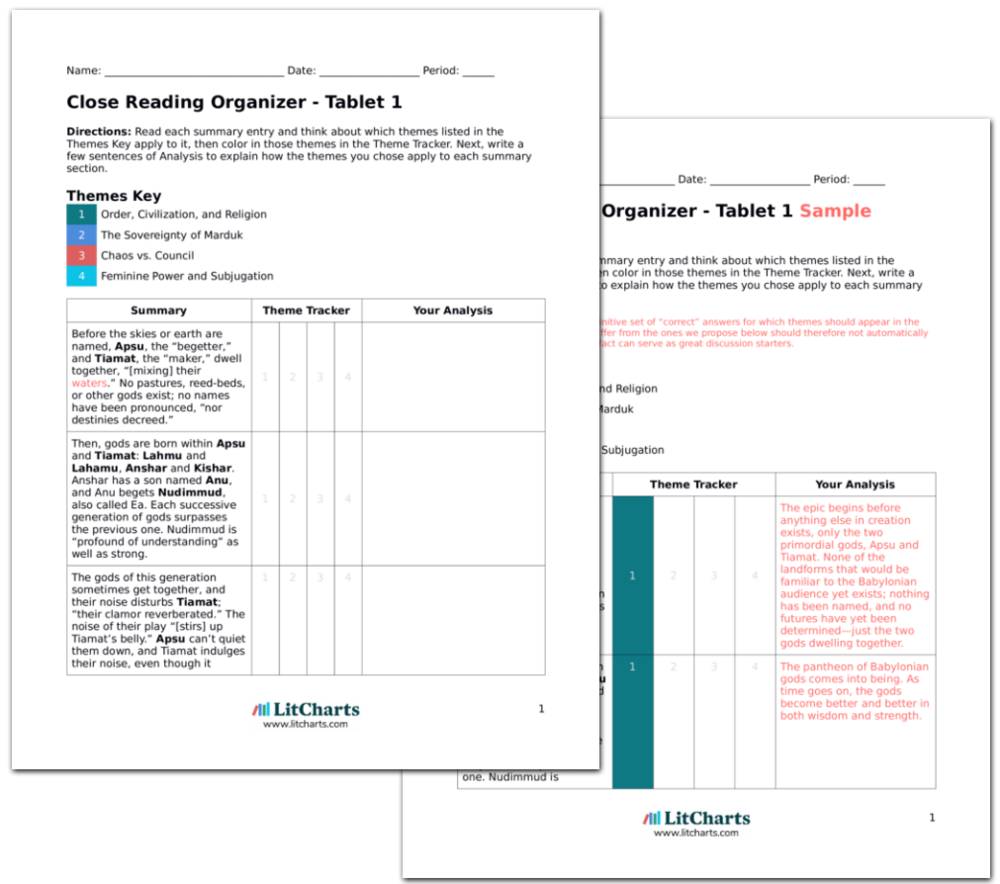