According to psychoanalytic theory, the abnormal repression of desires and impulses in an individual can result in mental illness. In Alan Strang’s case, it would appear that the repression of his sexuality, combined with the anxiety induced by society and his parents, lead to his self-destructive and antisocial behavior. As a psychiatrist, Martin Dysart’s job is to cure Alan’s abnormalities. He does this by relieving Alan’s repression—that is, by bringing repressed memories and feelings into Alan’s consciousness so that he might accept them and move on. We see Dysart trying to bring thoughts and experiences that Alan has repressed to the surface when he hypnotizes Alan and gives him the “truth pill.” These techniques allow Alan to discuss his issues with less anxiety, thus allowing him to come to terms with himself.

Peter Shaffer was strongly influenced by the theories of R. D. Laing, a Scottish psychiatrist whose radical ideas were popular at the time Shaffer was writing Equus. Laing believed that mental illnesses were not purely biological; rather, what was psychologically normal or abnormal was determined by society and conventional family values. In Laing’s view, “insane” individuals may not actually have psychological issues; rather, they may simply be reacting to the world in a way that society deemed wrong. Whereas society saw madness as a horrible illness, Laing saw madness as a unique and potentially transformative experience. In Equus, Martin Dysart expresses very similar views. His doubts about curing Alan at the expense of his individuality echo Laing’s belief in the creative possibilities of madness. And Dysart’s ambivalence goes beyond Alan’s individual case. In Act One, Dysart’s dream about sacrificing children in ancient Greece comes to represent the idea that he and his profession are sacrificing children’s individuality in order to assimilate them into the social norms of the modern world. This tension – between “curing” and “sacrificing” – is one that the play raises but suggests may not be possible to bridge or eliminate.

The ThemeTracker below shows where, and to what degree, the theme of Psychiatry, Repression, and Madness appears in each act of Equus. Click or tap on any chapter to read its Summary & Analysis.
How often theme appears:
act length:
Act
Act 1
1
Act 2
2
Get the entire Equus LitChart as a printable PDF.
"My students can't get enough of your charts and their results have gone through the roof." -Graham S.
Download 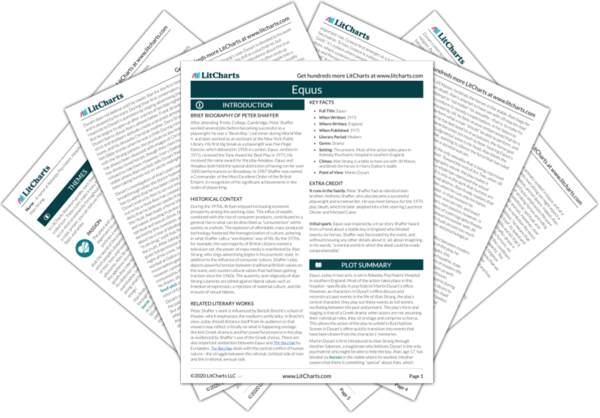 Below you will find the important quotes in Equus related to the theme of Psychiatry, Repression, and Madness.
Act 1 Quotes

You see, I’m wearing that horse’s head myself. That’s the feeling. All reined up in old language and old assumptions, straining to jump clean-hoofed on to a whole new track of being I only suspect is there. I can’t see it, because my educated, average head is being held at the wrong angle. I can’t jump because the bit forbids it, and my own basic force—my horsepower, if you like—is too little. The only thing I know for sure is this: a horse’s head is finally unknowable to me.

Frank: He took a piece of string out of his pocket. Made up into a noose. And put it in his mouth. And then with his other hand he picked up a coat hanger. A wooden coat hanger, and—and—
Dysart: Began to beat himself?
Frank: You see why I couldn’t tell his mother…Religion. Religion’s at the bottom of all this!

The Normal is the good smile in a child’s eyes—all right. It is also the dead stare in a million adults. It both sustains and kills—like a God. It is the Ordinary made beautiful; it is also the Average made lethal. The Normal is the indispensable, murderous God of Health, and I am his Priest. My tools are very delicate. My compassion is honest. I have honestly assisted children in this room. I have talked away terrors and relieved many agonies. But also—beyond question—I have cut from them parts of individuality repugnant to his God, in both his aspects. Parts sacred to rarer and more wonderful Gods. And at what length…Sacrifices to Zeus took at the most, surely, sixty seconds each. Sacrifices to the Normal can take as long as sixty months.

A child is born into a world of phenomena all equal in their power to enslave. It sniffs—it sucks—it strokes its eyes over the whole uncomfortable range. Suddenly one strikes. Why? Moments snap together like magnets, forging a chain of shackles. Why? I can trace them. I can even, with time, pull them apart again. But why at the start they were ever magnetized at all—just those particular moments of experience and no others—I don’t know. And nor does anyone else. Yet if I don’t know—if I can never know that—then what I am doing here? I don’t mean clinically doing or socially doing—I mean fundamentally! These questions, these Whys, are fundamental—yet they have no place in a consulting room.

Whatever’s happened has happened because of Alan. Alan is himself. Every soul is itself. If you added up everything we ever did to him, from his first day on earth to this, you wouldn’t find why he did this terrible thing—because that’s him; not just all of our things added up. Do you understand what I’m saying? I want you to understand, because I lie awake and awake thinking it out, and I want you to know that I deny it absolutely what he’s doing now, staring at me, attacking me for what he’s done, for what he is! [Pause: calmer.] You’ve got your words, and I’ve got mine. You call it a complex, I suppose. But if you knew God, Doctor, you would know about the Devil. You’d know the Devil isn’t made by what mummy says and daddy says. The Devil’s there.

Hesther: Then that’s enough. That simply has to be enough for you, surely?
Dysart: No!
Hesther: Why not?
Dysart: Because it’s his.
Hesther: I don’t understand.
Dysart: His pain. His own. He made it.
[Pause.]
[Earnestly.] Look…to go through life and call it yours—your life—you first have to get your own pain. Pain that’s unique to you…. He’s done that. All right, he’s sick. He’s full of misery and fear…. But that boy has known a passion more ferocious than I have ƒelt in any second of my life. And let me tell you something: I envy it.
Hesther: You can’t.
Dysart [vehemently]: Don’t you see? That’s the Accusation! That’s what his stare has been saying to me all this time. ‘At least I galloped! When did you?’ …[Simply.] I’m jealous, Hesther. Jealous of Alan Strang.