Get LitCharts A+
LitCharts assigns a color and icon to each theme in Everyday Use, which you can use to track the themes throughout the work.

As Mama narrates “Everyday Use,” she uses a multitude of objects and material goods to tell her story. Through Mama and her attention to objects, Walker investigates the meaning of materiality in fiction and explores the various ways they can be used for storytelling.

In the first place, material goods work in “Everyday Use” to stand in for and help describe characters’ identities. For example, Mama marks Dee’s difference from the rest of her family in part through her desire for “nice things.” Mama remarks that Dee has always had her own style, and when Dee returns to the family home, her “loud” clothes reflect her success and assertiveness. When Dee arrives at the house, Mama takes in Dee’s dress that is “so loud it [hurts] her eyes,” her earrings, and her bracelets “making noises.” Like her clothing, Dee is charismatic and expressive, sometimes to the point of being abrasive. Mama, on the other hand, represents her humbleness, simplicity, and hardworking disposition through her practical clothing: a flannel nightgown and overalls.

Not only do these material objects allow Walker to describe character, but they also enable her to track how it changes. For example, Dee’s changing relationship toward the objects of her childhood marks her changing attitude toward the past. As a child, Dee wanted new things and disdained her family’s possessions, but adult Dee admires the objects of her childhood, showing that Dee’s orientation towards her home and her heritage has changed.

Indeed, using objects to reflect character is something many authors do. But what sets “Everyday Use” apart is the way that Walker represents characters not only through their possessions, but also through their interaction with and exchange of them. In “Everyday Use,” Walker shows two distinct ways that characters orient themselves toward the material world.

The first way, exemplified by Dee, is rigidly symbolic. Dee collects objects for their symbolic meaning and visual beauty, rather than for their utility. For instance, Dee asks her mother to give her the top of a butter churn to use “as a centerpiece for the alcove table” and plans to do “something artistic” with the dasher. For Dee, these objects are valuable as visual symbols of an aestheticized past, not as part of an everyday routine.

In contrast, the other characters interact with objects in a way that is more organic and concerned with practicality and use. Mama, unlike Dee, values the objects in her home for the work they do and how they can be used, and notes how that use affects and enriches their meaning. The churn top is valuable to her not as an art object or a visual representation of the past, but because it is worn from making butter—for its important position in people’s everyday lives, and her family members’ lives in particular. To Mama, the butter churn and other objects like it have whole systems of intermingling memories and sensations attached to them through their continued use. When Mama interacts with the objects that connect her to her heritage, she is adding to that heritage, rather than simply memorializing it as Dee does.

These two differing views of how objects should best be appreciated clash in the story’s primary conflict, a disagreement about the family’s heirloom quilts. Dee wants to take them away and hang them on the walls of her house as memorabilia, while Mama wants Maggie to keep them because she will use them. When Mama “wins” this debate, Walker seems to be indicating her sympathies with Mama’s orientation to objects rather than Dee’s.

By juxtaposing the use of objects as exclusively as symbols and the use of objects in a more fluid way, ranging from practical to sensational to memorial, Walker, who has herself been using objects to tell her story, draws attention to the role of objects not only within the plot, but also in writing itself. By taking up objects in writing only as direct symbols, the story seems to ask a question: does a reader, like Dee, miss something essential about the way an object operates in the story? Walker seems to be warning her readers against reducing objects in her stories to simple, direct symbols. Instead, she implies that readers should consider the whole constellation of meanings that objects collect as they are used over and over again throughout the story.

The ThemeTracker below shows where, and to what degree, the theme of Objects, Symbolism, and Writing appears in each chapter of Everyday Use. Click or tap on any chapter to read its Summary & Analysis.
How often theme appears:
chapter length:
Chapter
Everyday Use
Get the entire Everyday Use LitChart as a printable PDF.
"My students can't get enough of your charts and their results have gone through the roof." -Graham S.
Download 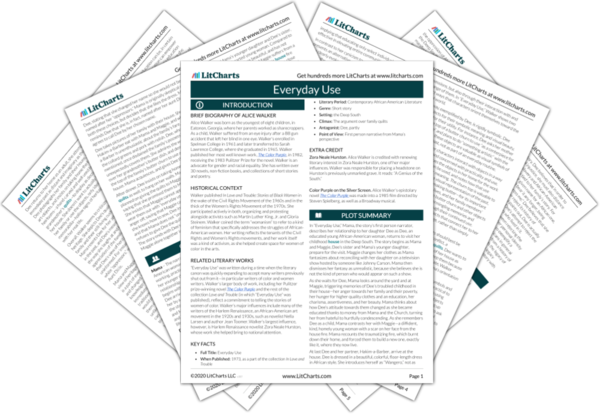 Objects, Symbolism, and Writing Quotes in Everyday Use

Below you will find the important quotes in Everyday Use related to the theme of Objects, Symbolism, and Writing.
Everyday Use Quotes

How long ago was it the house burned? Ten, twelve years? Sometimes I can still hear the flames and feel Maggie’s arms sticking to me, her hair smoking and her dress falling off her in little black papery flakes. Her eyes seemed stretched open, blazed open by the flames reflected in them. And Dee…Why don’t you dance around the ashes? I’d wanted to ask her. She had hated that house so much.

A dress down to the ground, in this hot weather. A dress so loud it hurts my eyes… Earrings gold, too, and hanging down to her shoulders. Bracelets dangling and making noises when she moves to shake the folds of her dress out of her armpits. The dress is loose and flows, and as she walks closer, I like it.

She stoops down quickly and lines up picture after picture of me sitting there in front of the house with Maggie cowering behind me. She never takes a shot without making sure the house is included. When a cow comes nibbling around the edge of the yard she snaps it and me and Maggie and the house.

You didn’t even have to look close to see where hands pushing the dasher up and down to make butter had left a kind of sink in the wood. In fact, there were a lot of small sinks; you could see where thumbs and fingers had sunk into the wood. It was a beautiful light yellow wood, from a tree that grew in the yard where Big Dee and Stash lived.

Maggie can’t appreciate those quilts! ...She’s probably backward enough to put them into everyday use. 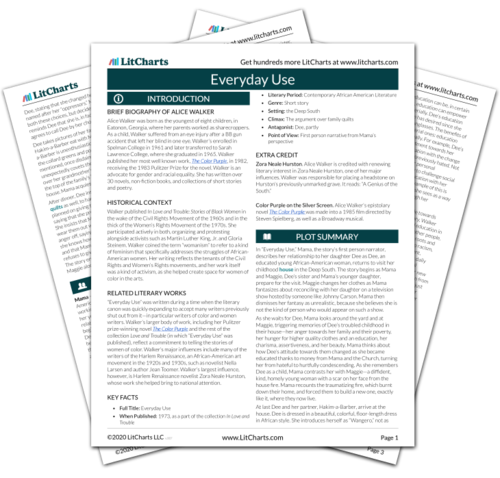 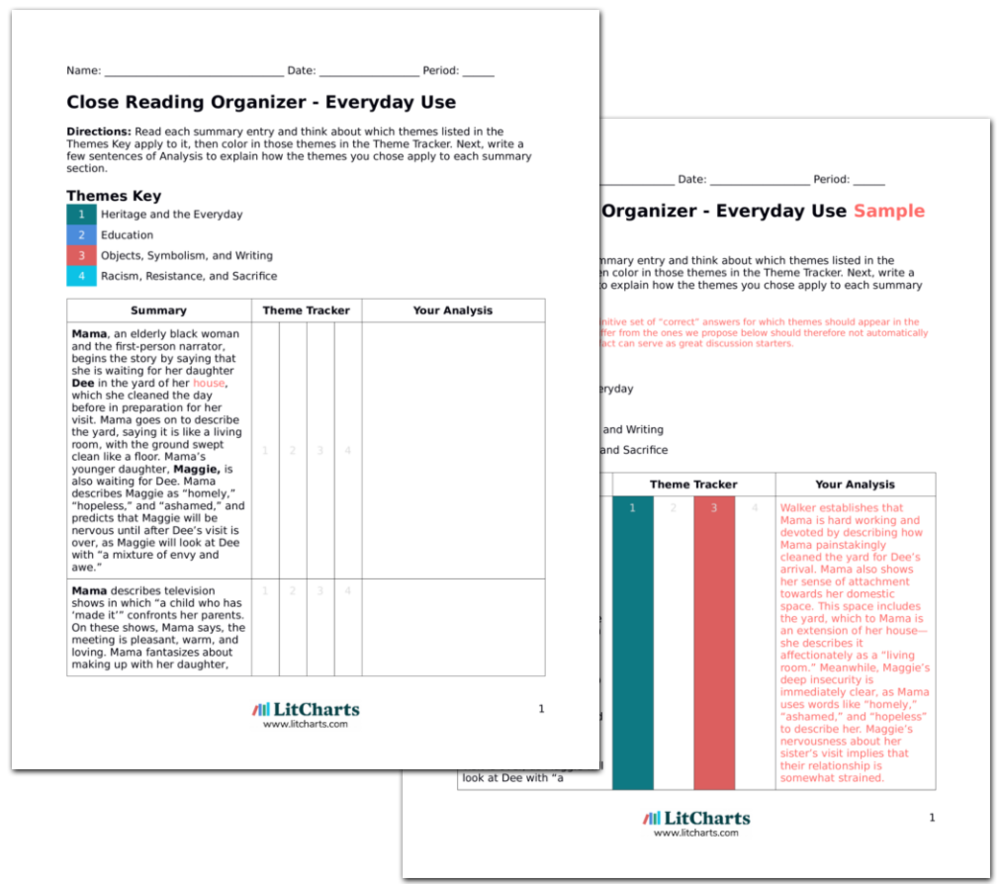