Zora Neale Hurston opens the essay by explicitly stating that she is “colored,” or African-American, and that she has no desire to minimize that identity by claiming Native-American ancestry, as other African-Americans of her time might.

She remembers the first day she felt colored. Before then, Hurston grew up in the black town of Eatonville, Florida. The only white people she saw were passing through on their way to Orlando. Although the locals paid no special attention to southern whites, who rode through on horses, they made a commotion over northern tourists who drove through in their cars, often coming out to the porch to observe them.

Growing up, Hurston relished the visits of these traveling white people and didn’t bother with subtlety when watching them from her porch. She would even greet them and walk alongside them as they traveled, and she jokes that the Chamber of Commerce should have taken notice of her efforts.

Hurston recalls that, in her childhood, she didn’t draw a distinction between white and colored people, only observing that the former rode through her town but never stopped. She would recite, sing, and dance for the travelers as she accompanied them, and was surprised when the travelers would sometimes give her a coin. The colored people in her town never paid her for her performances, but she nevertheless felt a sense of belonging there.

Her awakening as a “little colored girl” begins upon moving to Jacksonville at the age of thirteen. She describes a loss of identity: she’s no longer Zora of Orange County, but an impulsive colored girl to be scolded and watched. However, in her present life, Hurston doesn’t view her colored status as a tragedy. She contrasts herself with other African-Americans, who she says feel victimized by their oppression. Instead, she claims that life is dominated by the powerful, whether that power is applied on the basis of skin color or any other criteria.

Hurston complains about the tendency to overemphasize the legacy of slavery, which she dismisses by placing it “sixty years in the past.” She describes the struggles of previous generations as a sacrifice for her current freedom, which she plans to use in pursuit of glory and adventure. In contrast, white people are haunted by the historical guilt of African-American slavery.

Hurston notes that she doesn’t always “feel [her] race,” but she feels it most often around white people, as she does at Barnard College in New York. But she describes the feeling in positive terms, as it brings her sense of self into greater relief.

She tells an anecdote about bringing a white friend to a jazz club in her black neighborhood. As the band strikes up, Hurston enters a trance where she makes contact with a more primitive, animal nature. She describes herself with painted skin brandishing an African spear. But when she returns to reality, her white friend merely compliments the music. Hurston pities him because what was an ecstatic experience to her is just “music” to him.

At times, Hurston feels she has no race but “Zora.” She belongs to no specific place or time. She walks the streets of Manhattan as a mythic, cosmic figure. Although she experiences discrimination, she can’t imagine why someone would deny themselves her company based on something so insubstantial as race.

To explain her point, Hurston poses a metaphor of colored bags that correspond to racial identity and skin color. What draws her interest is not the appearance of the bags, but the contents, which she describes in deep and poignant detail. She claims that all the objects in these bags could be mixed up and replaced, with the contents of a white bag placed in a brown bag, without needing to tailor the contents to the color of the bag. And that might even be the original intent of the “Great Stuffer of Bags,” the deity who filled the “bags” in the first place. 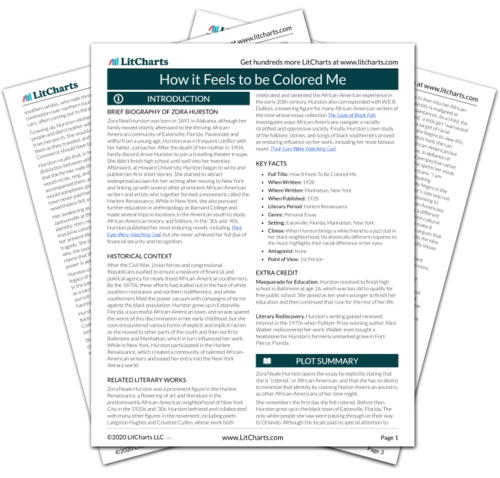 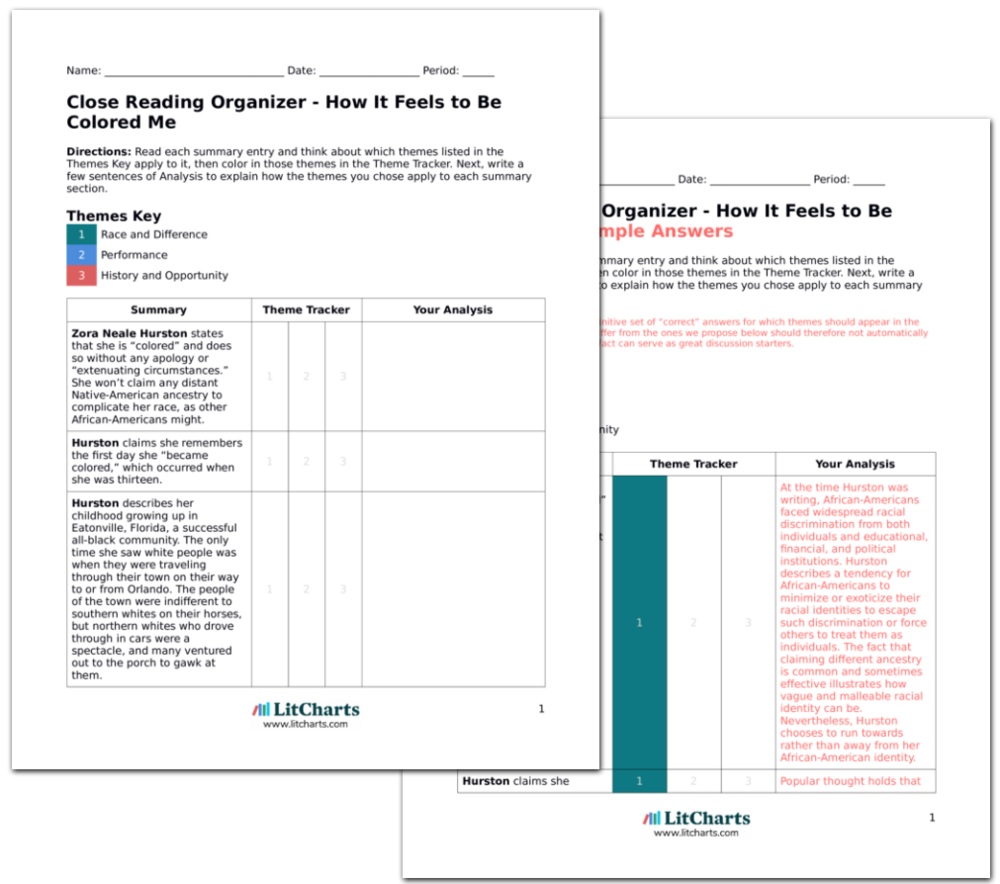