Download this LitChart! (PDF)
Teachers and parents! Struggling with distance learning? Our Teacher Edition on How to Be an Antiracist can help.

Welcome to the LitCharts study guide on Ibram X. Kendi's How to Be an Antiracist. Created by the original team behind SparkNotes, LitCharts are the world's best literature guides.

How to Be an Antiracist: Introduction

A concise biography of Ibram X. Kendi plus historical and literary context for How to Be an Antiracist.

How to Be an Antiracist: Plot Summary

A quick-reference summary: How to Be an Antiracist on a single page.

How to Be an Antiracist: Detailed Summary & Analysis

In-depth summary and analysis of every chapter of How to Be an Antiracist. Visual theme-tracking, too.

How to Be an Antiracist: Themes

Explanations, analysis, and visualizations of How to Be an Antiracist's themes.

How to Be an Antiracist: Quotes

How to Be an Antiracist's important quotes, sortable by theme, character, or chapter.

How to Be an Antiracist: Characters

Description, analysis, and timelines for How to Be an Antiracist's characters.

Description, analysis, and timelines for How to Be an Antiracist's terms.

How to Be an Antiracist: Symbols

Explanations of How to Be an Antiracist's symbols, and tracking of where they appear.

How to Be an Antiracist: Theme Wheel

An interactive data visualization of How to Be an Antiracist's plot and themes.

As he recounts in How to Be an Antiracist, Ibram X. Kendi was born and raised in Queens, New York. After feeling ostracized in Christian private schools for many years, he attended John Bowne High School in Queens before moving to Virginia with his family, where he graduated from Stonewall Jackson High School (now Unity Reed High School). Although he was an average student and mostly cared about basketball during high school, Kendi went on to study African American Studies and Magazine Production at Florida A&M University, then earn his PhD in African American Studies from Temple University in 2010. He taught in the State University of New York system for seven years before taking appointments at Brown University and the University of Florida. In 2016, at age 34, Kendi became the youngest winner of the National Book Award for Nonfiction for his second book, Stamped from the Beginning. However, as he explains in How to Be an Antiracist, while writing Stamped from the Beginning Kendi realized that his fundamental assumptions about the nature of racist ideas were wrong: racist ideas do not cause people to support racist policies; rather, people adopt racist ideas in order to defend racist policies that they choose for self-interested reasons. This realization led him to begin working on policy issues, including by founding the Antiracist Research and Policy Center at American University, where he taught from 2017–2020. But in early 2018, he was diagnosed with late-stage colon cancer and given only a 12% chance of survival. Miraculously, he beat the cancer, and in How to Be an Antiracist he uses this experience—as well as his wife’s, mother’s, and father’s respective battles with cancer—as a metaphor for the American battle against racism. Kendi became a household name in the United States with the publication of How to Be an Antiracist in 2019; the book became a #1 New York Times Bestseller in 2020, during the nationwide wave of antiracist protests in the wake of the murder of George Floyd by the Minneapolis police. As of mid-2020, Kendi is moving to Boston University, where he is establishing the Boston University Center for Antiracist Research and planning to spend 2020–2021 as a fellow at the Radcliffe Institute at Harvard University.
Get the entire How to Be an Antiracist LitChart as a printable PDF.
"My students can't get enough of your charts and their results have gone through the roof." -Graham S.
Download 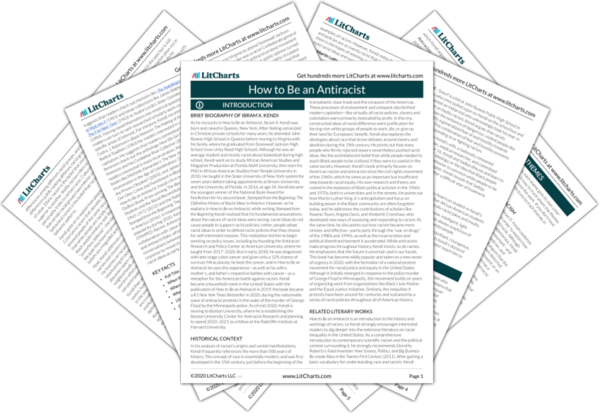 Historical Context of How to Be an Antiracist

In his analysis of racism’s origins and varied manifestations, Kendi frequently references the more than 500 years of history. The concept of race is essentially modern, and was first developed in the 15th century, just before the beginning of the transatlantic slave trade and the conquest of the Americas. These processes of enslavement and conquest also birthed modern capitalism—like virtually all racist policies, slavery and colonialism were primarily motivated by profit. In this era, constructed ideas of racial difference were justification for forcing non-white groups of people to work, die, or give up their land for Europeans’ benefit. Kendi also explores the ideologies about race that drove debates around slavery and abolition during the 19th century. He points out that many people who firmly rejected slavery nevertheless pushed racist ideas, like the assimilationist belief that white people needed to teach Black people to be civilized, if they were to coexist in the same society. However, Kendi’s book primarily focuses on American racism and antiracism since the civil rights movement of the 1960s, which he views as an important but insufficient step towards racial equity. His own research and theory are rooted in the explosion of Black political activism in the 1960s and 1970s, both in universities and in the streets. He points out how Martin Luther King Jr.’s anticapitalism and focus on building power in the Black community are often forgotten today, and he addresses the contributions of scholars like Kwame Toure, Angela Davis, and Kimberlé Crenshaw, who developed new ways of assessing and responding to racism. At the same time, he also points out how racism became more sinister and effective—particularly through the “war on drugs” of the 1980s and 1990s, as well as the incarceration and political disenfranchisement it accelerated. While antiracists make progress throughout history, Kendi insists, so do racists. He emphasizes that the future is uncertain and in our hands. This book has become wildly popular and taken on a new sense of urgency in 2020, with the formation of a national protest movement for racial justice and equity in the United States. Although it initially emerged in response to the police murder of George Floyd in Minneapolis, this movement builds on years of organizing work from organizations like Black Lives Matter and the Equal Justice Initiative. Similarly, the inequities it protests have been around for centuries and sustained by a series of racist policies throughout all of American history.

Other Books Related to How to Be an Antiracist

How to Be an Antiracist is an introduction to the history and workings of racism, so Kendi strongly encourages interested readers to dig deeper into the extensive literature on racial inequality in the United States. As a comprehensive introduction to contemporary scientific racism and the political context surrounding it, he strongly recommends Dorothy Roberts’s Fatal Invention: How Science, Politics, and Big Business Re-create Race in the Twenty-First Century (2011). After gaining a basic vocabulary for understanding race and racism, Kendi suggests that readers check out memoirs like The Autobiography of Malcolm X (1965) and essay collections like James Baldwin’s The Fire Next Time (1963) or Audre Lorde’s Sister Outsider (1984). Having eased themselves into empirical questions, readers can turn to well-researched scholarly work on their specific areas of interest. For instance, Kendi recommends Cedric J. Robinson’s Black Marxism: The Making of the Black Radical Tradition (1983) for readers interested in racial capitalism. He suggests that readers committed to antiracist feminism check out the anthology How We Get Free: Black Feminism and the Combahee River Collective (2017). And for readers interested in mass incarceration, Kendi recommends books like Michelle Alexander’s The New Jim Crow: Mass Incarceration in the Age of Colorblindness (2010), Angela Davis’s Are Prisons Obsolete? (2003), and James Forman Jr.’s Locking Up Our Own: Crime and Punishment in Black America (2017). Before How to Be an Antiracist, Kendi’s first two books were the W.E.B. DuBois Book Prize winning The Black Campus Movement: Black Students and the Racial Reconstitution of Higher Education, 1965-1972 (2012) and the National Book Award winning Stamped from the Beginning (2016). In response to his work’s sudden surge in popularity during 2020, Kendi has published two more books: STAMPED: Racism, Antiracism, and You, which he wrote in collaboration with Jason Reynolds and is aimed at young adults, and Antiracist Baby, which is designed to facilitate conversations between parents and their young children, in response to research showing that babies often internalize racist ideas as early as two years old.
Key Facts about How to Be an Antiracist

Extra Credit for How to Be an Antiracist

Antiracist Renaming. In How to Be an Antiracist, Kendi recalls ambivalently moving to Virginia to attend Stonewall Jackson High School, whose namesake was a racist Confederate general in the Civil War. During the 2020 antiracist protest movement inspired by the murder of George Floyd, public opinion turned sharply towards renaming the school, and a widely circulated petition with tens of thousands of signatures suggested that the school be renamed Ibram X. Kendi High School. (The school administration was reluctant to name the school after a living person, so instead renamed it Unity Reed High School.) 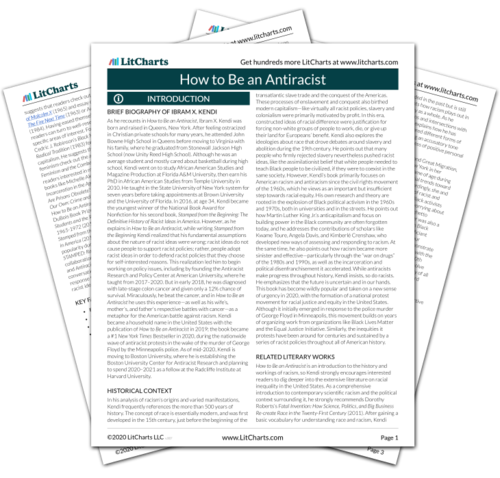 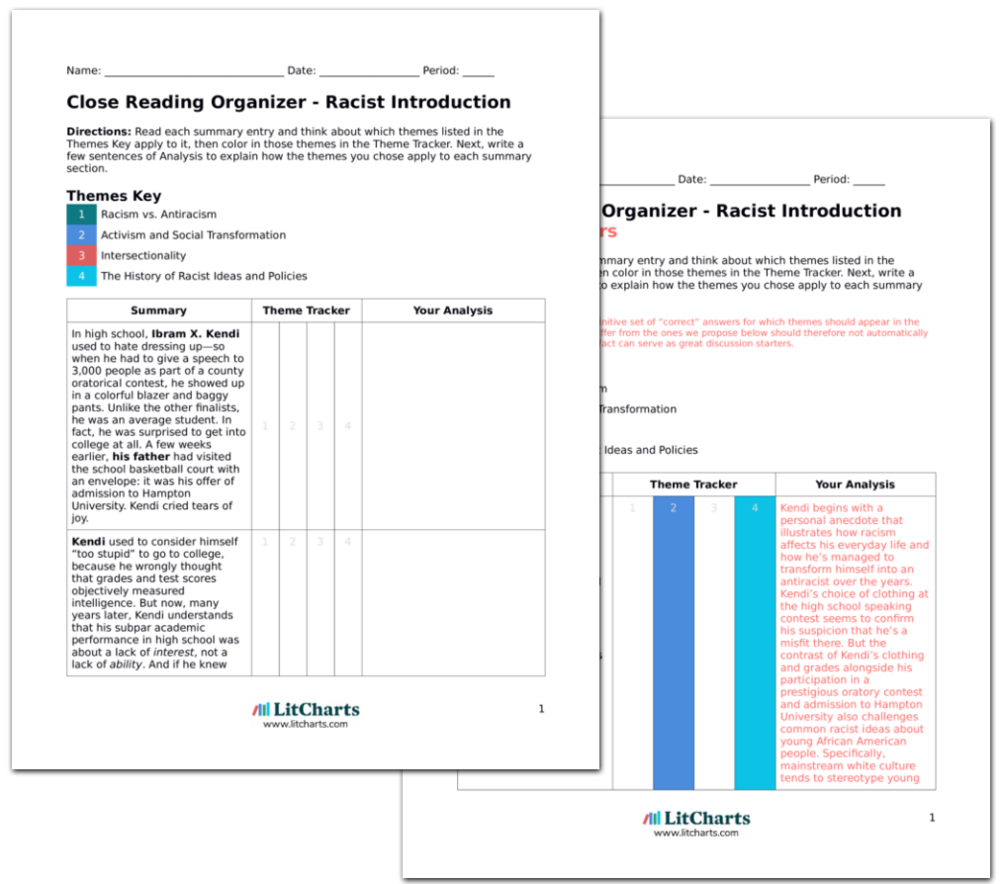