Download this LitChart! (PDF)
Teachers and parents! Struggling with distance learning? Our Teacher Edition on Indian Ink can help.

Welcome to the LitCharts study guide on Tom Stoppard's Indian Ink. Created by the original team behind SparkNotes, LitCharts are the world's best literature guides.

A concise biography of Tom Stoppard plus historical and literary context for Indian Ink.

A quick-reference summary: Indian Ink on a single page.

In-depth summary and analysis of every act of Indian Ink. Visual theme-tracking, too.

Explanations of Indian Ink's symbols, and tracking of where they appear.

An interactive data visualization of Indian Ink's plot and themes.

Tom Stoppard was born to a Jewish family in the Czech city of Zlín in 1937. Two years later, his parents fled the country with him to escape the Nazi occupation. They moved to Singapore, where his father died as a Japanese prisoner of war, and then to Darjeeling, India, where he attended an American boarding school and his mother married Kenneth Stoppard, an English army officer. (This is how his name changed from Tomáš Sträussler, his birth name, to Tom Stoppard.) He moved to England with his family at age 10 and continued his education in Yorkshire. But he quit school at age 17 to become a journalist and never went to college. For a decade, Stoppard worked as a reporter and theatre critic, befriending actors and directors until he started writing plays of his own. His first play, A Walk on the Water, was an instant hit in 1962, and two years later, he published Rosencrantz and Guildenstern Are Dead, which remains his best-known work today. In the more than five decades since, he has written around three dozen stage plays and nearly as many major screenplays (including many adaptations from novels, the Academy Award winner Shakespeare in Love, and even parts of the third Star Wars movie). Between 1968 and 2020, he won seven Tony Awards and Laurence Olivier Awards for Best Play. (As of 2022, he is tied for the most Tony Award wins for writing.) He has also translated numerous plays from throughout Europe into English—most notably those of the Czech writer, activist, and eventual president Václav Havel. After communist rule ended in the Czech Republic and Slovakia in the early 1990s, Stoppard finally returned to his birthplace of Zlín and learned, tragically, that his grandparents and his mother’s three sisters were all murdered in Nazi concentration camps. He was knighted in 1997 and remains one of Britain’s most highly regarded playwrights today.
Get the entire Indian Ink LitChart as a printable PDF.
"My students can't get enough of your charts and their results have gone through the roof." -Graham S.
Download 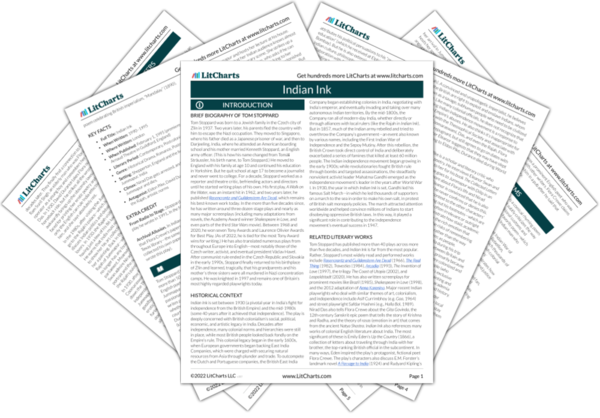 Indian Ink is set between 1930 (a pivotal year in India’s fight for independence from the British Empire) and the mid-1980s (some 40 years after it achieved that independence). The play is deeply concerned with British colonialism’s social, political, economic, and artistic legacy in India. Decades after independence, many colonial norms and hierarchies were still in place, while most British people looked back fondly on the Empire’s rule. This colonial legacy began in the early 1600s, when European governments began backing East India Companies, which were charged with securing natural resources from Asia through plunder and trade. To outcompete the Dutch and Portuguese companies, the British East India Company began establishing colonies in India, negotiating with India’s emperor, and eventually invading and taking over many autonomous Indian territories. By the mid-1800s, the Company ran all of modern-day India, whether directly or through alliances with local rulers (like the Rajah in Indian Ink). But in 1857, much of the Indian army rebelled and tried to overthrow the Company’s government—an event also known by various names, including the First Indian War of Independence and the Sepoy Mutiny. After this rebellion, the British Crown took direct control of India and deliberately exacerbated a series of famines that killed at least 60 million people. The Indian independence movement began growing in the early 1900s; while revolutionaries fought British rule through bombs and targeted assassinations, the steadfastly nonviolent activist leader Mahatma Gandhi emerged as the independence movement’s leader in the years after World War I. In 1930, the year in which Indian Ink is set, Gandhi led his famous Salt March—in which he led thousands of supporters on a march to the sea in order to make his own salt, in protest of British salt monopoly policies. The march attracted attention worldwide and helped convince millions of Indians to start disobeying oppressive British laws. In this way, it played a significant role in contributing to the independence movement’s eventual success in 1947.

Other Books Related to Indian Ink

Tom Stoppard has published more than 40 plays across more than five decades, and Indian Ink is far from the most popular. Rather, Stoppard’s most widely read and performed works include Rosencrantz and Guildenstern Are Dead (1966), The Real Thing (1982), Travesties (1984), Arcadia (1993), The Invention of Love (1997), the trilogy The Coast of Utopia (2002), and Leopoldstadt (2020). He has also written screenplays for prominent movies like Brazil (1985), Shakespeare in Love (1998), and the 2012 adaptation of Anna Karenina. Major recent Indian playwrights who deal with similar themes of art, colonialism, and independence include Asif Currimbhoy (e.g. Goa, 1964) and street playwright Safdar Hashmi (e.g., Halla Bol, 1989). Nirad Das also tells Flora Crewe about the Gita Govinda, the 12th-century Sanskrit epic poem that tells the story of Krishna and Radha, and the theory of rasas (emotion in art) that comes from the ancient Natya Shastra. Indian Ink also references many works of colonial English literature about India. The most significant of these is Emily Eden’s Up the Country (1866), a collection of letters about traveling through India with her brother, the top-ranking British official in the subcontinent. In many ways, Eden inspired the play’s protagonist, fictional poet Flora Crewe. The play’s characters also discuss E.M. Forster’s landmark novel A Passage to India (1924) and Rudyard Kipling’s poem celebrating British imperialism, “Mandalay” (1890).
Key Facts about Indian Ink

From Radio to Stage. Stoppard adapted Indian Ink from a radio play he wrote in 1991, In the Native State.

Archival Allusion. In Indian Ink, the scholar Eldon Pike notes that Flora Crewe’s papers are archived at the University of Texas library—the same place where Tom Stoppard has collected his own papers since 1991 (five years before he wrote this play). 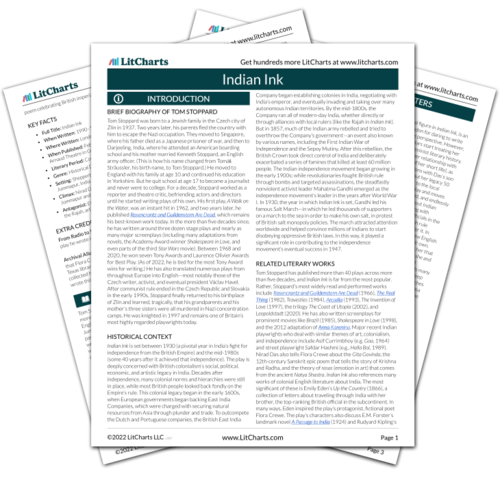 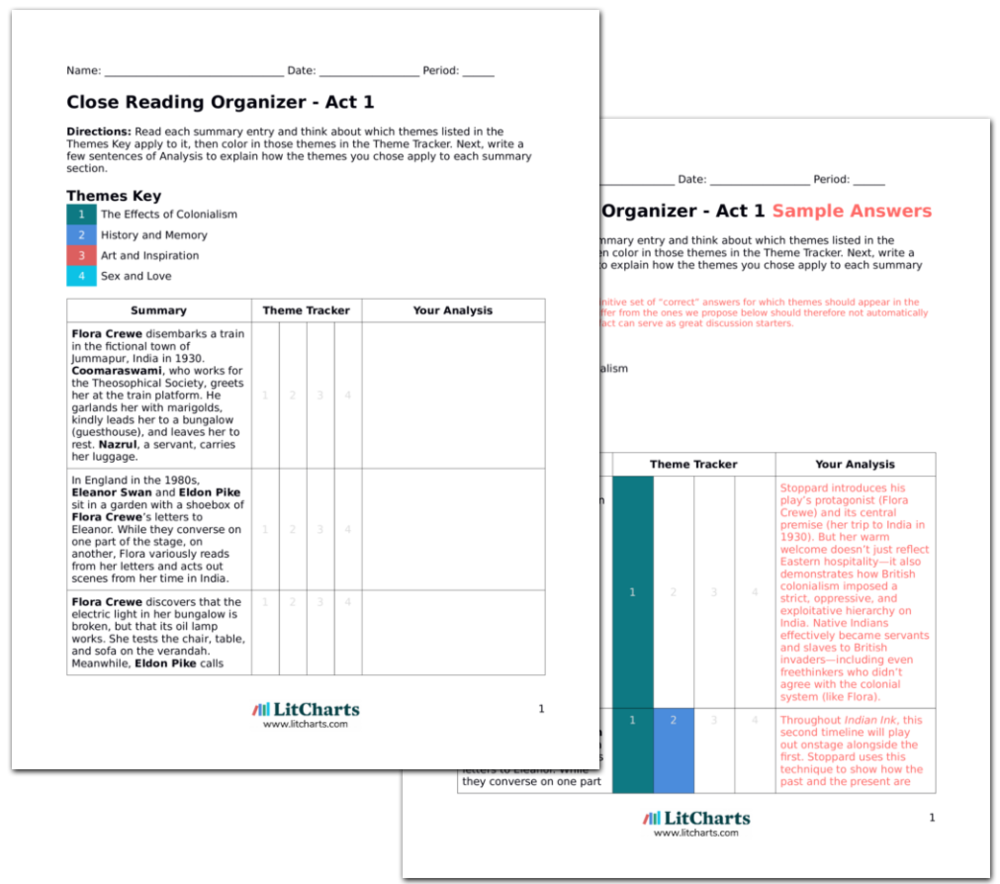