July’s People imagines an alternate history in which a Black liberation movement forcefully overturns apartheid rule, embroiling the nation in a violent civil war that endangers the lives of the country’s minority white population. These circumstances force the Smaleses, an affluent, white South African family, to flee their suburban Johannesburg home. When rebel takeover of ports and airports makes escaping the country impossible, the Smaleses gratefully accept their Black servant, July’s, offer to seek refuge in his rural village. Forced to abandon their old life with no notice, the Smaleses arrive at July’s village with the clothes on their backs and little else. The Smaleses are well aware that they are lucky to be alive. However, life in July’s village is a huge culture shock for the family, who previously enjoyed a comfortable, privileged lifestyle in town. In July’s village, the family resides in a small, earthen hut. With no access to modern amenities, they learn to bathe in the river and cook over an open fire. Bam hunts for warthogs with the other villagers, and Maureen helps the women unearth root vegetables and gather grass for thatching.

While the children—Gina, Victor, and Royce—quickly adapt to life in July’s village, their parents have more difficulty accepting their present situation. Maureen and Bam are a liberal couple who proudly condemn apartheid. However, at July’s village, they obsessively tune in to the radio, anxiously listening for news that fighting has ceased and order has been restored. Although such thinking radically undermines their progressive political views, the reality is that Smaleses long to return to the privileged, comfortable life in Johannesburg that the oppressive system of apartheid—and July’s services—have allowed them to enjoy. Maureen considers the fantasies she used to have about taking a family trip to July’s village to teach her children how to experience and appreciate a life and culture so radically different from their own. With no choice but to experience that culture firsthand and wholly reliant on July for food, shelter, and protection, Maureen regards her earlier attitude as idealistic and misguided. She and Bam grow increasingly resentful of having to answer to July and begin to question his loyalty to their family.

One major source of doubt for the Smaleses is that July has the keys to their bakkie, or pickup truck. The Smaleses’ suspicions that July is disloyal come to a head when July and a friend drive the Smaleses’ bakkie into town without asking permission or saying where they are going or when they plan to return. As Bam and Maureen anxiously await July’s return, they argue over July’s motivations for helping their family and whether or not they can trust him. While Bam believes that July is helping them out of genuine love and concern for the family’s wellbeing, Maureen is more skeptical. Eventually, July returns to the village. When Bam and Maureen confront him about taking the bakkie without their permission, their attempt to reassert control over the vehicle backfires. July explains that he only drove the vehicle to the shops to pick up food and other supplies, including batteries for the Smaleses’ radio. July’s explanation implicitly reminds the Smaleses that their survival is dependent on his willingness to provide for them, effectively putting them in their place while reaffirming his authority.

Tensions continue to rise. July’s mother and his wife, Martha, express their concern and disapproval of July’s decision to house a white family in the village. The Smaleses’ presence poses a significant risk to everyone. Word travels fast, and if rebel forces receive information that the village is sheltering a white family, they might choose to attack. Eventually, the chief finds out that the Smaleses have been staying in the village and demands to meet them in person. When July relays the chief’s message to Maureen and Bam, they assume that the chief will banish them from the village. The family is immensely relieved, then, when the chief allows them to remain in the village. Much of their meeting with the chief involves a discussion of the ongoing civil war. The chief opposes the fighting, arguing that the Black liberation movement attracts outside tribes that may jeopardize the chief’s control over his land. The growing threat of violence makes the chief want to defend his land against rebel forces. Somehow, the chief learns that Bam owns a shotgun, and he requests that Bam give him a shooting lesson. The chief’s position horrifies Bam, who can’t imagine how the chief could want to shoot his own people.

Sometime later, a man carrying a red box wanders into the town. The man is the village’s equivalent of “travelling entertainment.” He removes a record player and amplifier from his box and engages the village in a raucous celebration called “gumba-gumba,” which consists of music, dancing, and drinking. The Smaleses are in no mood to celebrate and head back to their hut. Upon their return, Bam realizes that his shotgun is missing. After the family’s frantic search fails to produce the missing weapon, Bam collapses onto the bed in despair.

Maureen leaves the hut and finds July in his usual spot at the bakkie’s hiding place outside the main settlement. She accuses him of stealing the gun but quickly realizes that he has no idea what she’s talking about. Maureen remembers that July’s friend Daniel wasn’t at the gumba-gumba with the rest of the village and identifies him as the probable thief. July informs Maureen that Daniel left the village a few days ago. However, July also insists that the missing gun isn’t his problem and refuses to tell Maureen where Daniel went. He tells Maureen that her family’s presence in the village is causing him too many problems, insinuating that it won’t be long before he orders them to leave. July’s obstinance enrages Maureen. Throughout her stay at July’s village, Maureen has witnessed numerous villagers using objects she recognizes from her family’s house in Johannesburg. Now, she accuses July of stealing from her family and betraying their trust. July proceeds to yell at Maureen in his language. Although Maureen can’t understand his words, his message is abundantly clear: Maureen’s repeated attempts to dignify July have had the opposite effect. Throughout July’s 15 years of service, Maureen’s patronizing attitude and controlling demeanor have only dehumanized and alienated him. Finally, July switches to English to tell Maureen that Daniel has run away to join the rebel fighters. Maureen escalates the situation further, accusing July of being opportunistic and big-headed. She claims that July is a coward who has no qualms about staying behind, driving around in the stolen bakkie, and pretending to be a “big man” while others, like Daniel, fight on behalf of his people.

The next day, Maureen is sewing in her family’s hut when she sees a helicopter fly over the village before landing somewhere in the distant bushland. Maureen can’t see any markings to determine whether the aircraft carries an ally or an enemy. Nevertheless, she drops her sewing, exits the hut, and walks away from the village. Maureen picks up speed as she nears the river and then crosses it. Ignoring her family’s calls, Maureen runs forward into the bushland to meet the helicopter and her uncertain fate. 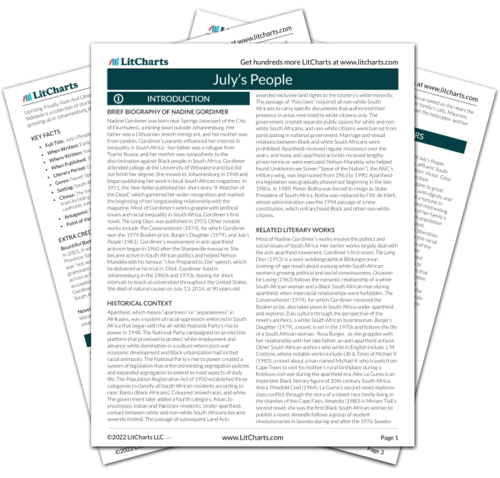 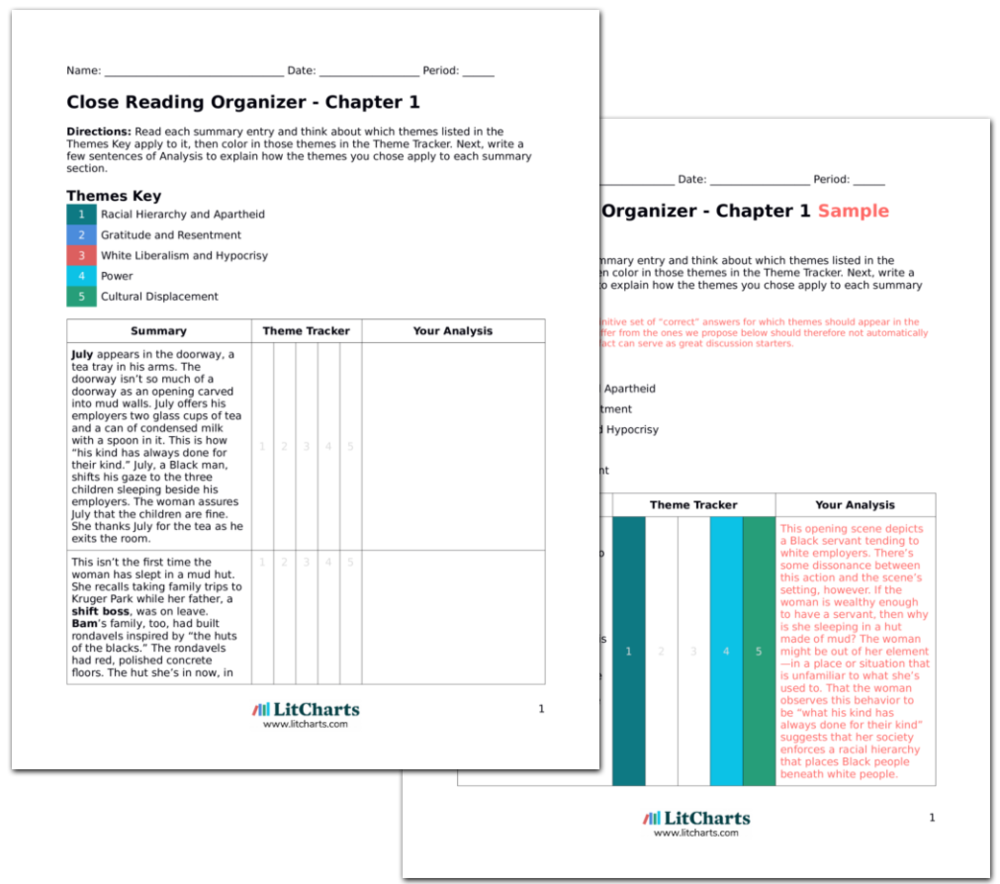