Download this LitChart! (PDF)
Teachers and parents! Struggling with distance learning? Our Teacher Edition on Letters to a Young Poet can help.

Welcome to the LitCharts study guide on Rainer Maria Rilke's Letters to a Young Poet. Created by the original team behind SparkNotes, LitCharts are the world's best literature guides.

Letters to a Young Poet: Introduction

A concise biography of Rainer Maria Rilke plus historical and literary context for Letters to a Young Poet.

A quick-reference summary: Letters to a Young Poet on a single page.

In-depth summary and analysis of every letter of Letters to a Young Poet. Visual theme-tracking, too.

Letters to a Young Poet: Themes

Explanations, analysis, and visualizations of Letters to a Young Poet's themes.

Letters to a Young Poet: Quotes

Letters to a Young Poet's important quotes, sortable by theme, character, or letter.

Letters to a Young Poet: Characters

Description, analysis, and timelines for Letters to a Young Poet's characters.

Description, analysis, and timelines for Letters to a Young Poet's terms.

Letters to a Young Poet: Symbols

Explanations of Letters to a Young Poet's symbols, and tracking of where they appear.

An interactive data visualization of Letters to a Young Poet's plot and themes.

Rainer Maria Rilke was born in Prague in 1875. His father worked for the railroad after a failed stint in the military. Rilke had a somewhat strained relationship with his mother, who was in mourning during his childhood because her daughter had died in infancy before Rilke was born. As a result, she often treated Rilke as if he were the little girl she’d lost. In 1886, at the age of 11, Rilke attended a military academy in the Austrian city of Sankt Pölten. He detested his time there, as he was brutally bullied for his sensitivity. In fact, he had such a hard time at military school that he later suggested that it was necessary for him to completely block out the memory of his experience there in order to make anything of himself as an artist. He lasted for five years at the school before leaving to attend trade school, from which he was expelled in 1892. He was then tutored at home until 1895. It was during this period that he wrote his first collection of poetry, Life and Songs, which was published in 1894. He spent a brief period attending the Charles-Ferdinand University in Prague, but he soon left school and moved to Munich, where he became acquainted with other writers and started working seriously on his own writing. He published a number of poetry collections in the ensuing years, including The Book of Hours, a three-part book that he worked on between 1899 and 1903. He also wrote several plays and short stories, though none of them are considered his finest work. However, his novel The Notebooks of Malte Laurids Brigge is one of his best-known pieces of writing and explores themes he constantly struggled with in both his poetry and his life—themes having to do with God, solitude, and life’s incomprehensibility. For the majority of his life, Rilke faced illness and was often unwell, eventually dying of leukemia in 1926.
Get the entire Letters to a Young Poet LitChart as a printable PDF.
"My students can't get enough of your charts and their results have gone through the roof." -Graham S.
Download 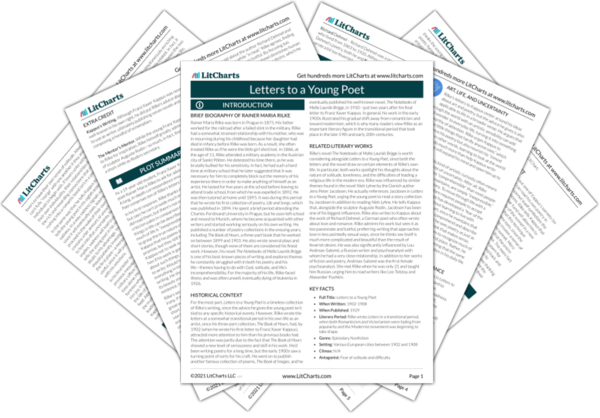 Historical Context of Letters to a Young Poet

For the most part, Letters to a Young Poet is a timeless collection of Rilke’s writing, since the advice he gives the young poet isn’t tied to any specific historical events. However, Rilke wrote the letters at a somewhat transitional period in his own life as an artist, since his three-part collection, The Book of Hours, had, by 1902 (when he wrote his first letter to Franz Xaver Kappus), attracted more attention to him than his previous books had. The attention was partly due to the fact that The Book of Hours showed a new level of seriousness and skill in his work. He’d been writing poetry for a long time, but the early 1900s saw a turning point of sorts for his craft. He went on to publish another famous collection of poems, The Book of Images, and he eventually published his well-known novel, The Notebooks of Malte Laurids Brigge, in 1910—just two years after his final letter to Franz Xaver Kappus. In general, his work in the early 1900s illustrated his gradual shift away from romanticism and toward modernism, which is why many readers view Rilke as an important literary figure in the transitional period that took place in the late-19th and early 20th-centuries.

Other Books Related to Letters to a Young Poet

Rilke’s novel The Notebooks of Malte Laurids Brigge is worth considering alongside Letters to a Young Poet, since both the letters and the novel draw on certain elements of Rilke’s own life. In particular, both works spotlight his thoughts about the nature of solitude, loneliness, and the difficulties of leading a religious life in the modern era. Rilke was influenced by similar themes found in the novel Niels Lyhne by the Danish author Jens Peter Jacobsen. He actually references Jacobsen in Letters to a Young Poet, urging the young poet to read a story collection by Jacobsen in addition to reading Niels Lyhne. He tells Kappus that, alongside the sculptor Auguste Rodin, Jacobsen has been one of his biggest influences. Rilke also writes to Kappus about the work of Richard Dehmel, a German poet who often wrote about love and romance. Rilke admires his work but sees it as too passionate and lustful, preferring writing that approaches love in less pointedly sexual ways, since he thinks sex itself is much more complicated and beautiful than the result of feverish desire. He was also significantly influenced by Lou Andreas-Salomé, a Russian writer and psychoanalyst with whom he had a very close relationship. In addition to her works of fiction and poetry, Andreas-Salomé was the first female psychoanalyst. She met Rilke when he was only 21 and taught him Russian, urging him to read writers like Leo Tolstoy and Alexander Pushkin.
Key Facts about Letters to a Young Poet

Extra Credit for Letters to a Young Poet

Kappus’s Writing. Although Franz Xaver Kappus was never well-known in his own right, he did put Rilke’s advice about art to use as writer, ultimately publishing seven novels and composing a handful of screenplays.

The Mentor’s Mentor. While the young Franz Kappus looked to Rilke for inspiration, Rilke himself greatly admired the work of sculptor Auguste Rodin—so much, in fact, that he worked for a short while as Rodin’s secretary. 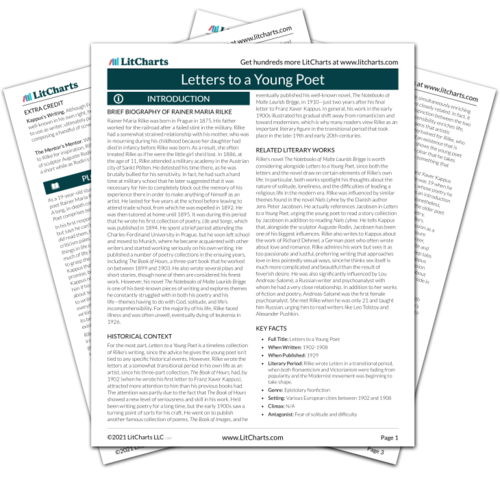 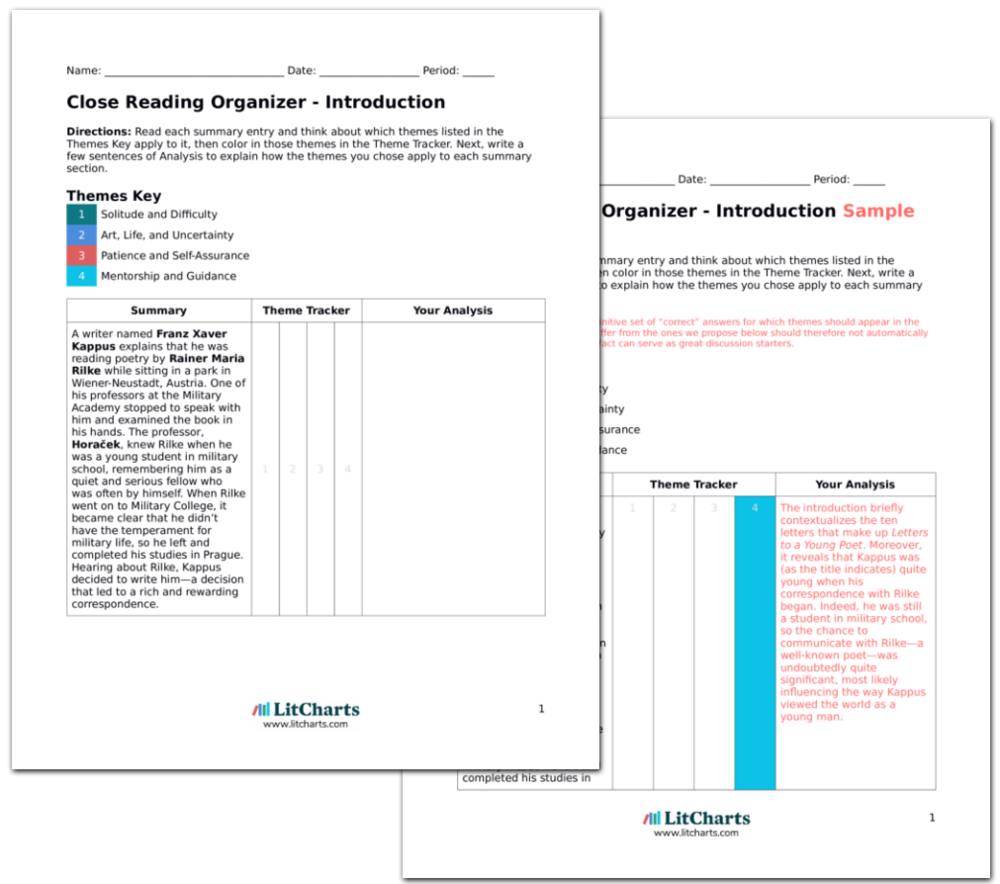