Roley, an employee at Oceanworld, arrives at work to find that Oceanworld’s only remaining dolphin, Samson, has died (presumably of old age). This leads him to reflect on his wife Liz’s recent accident, which has left her with severe brain damage. He recalls specific moments and speculates on the gruesome details of the operation. It appears that he is still in a state of shock and disbelief about what has happened.

When Roley’s boss, Declan, arrives at the pool and sees Samson’s body, he orders Roley to haul it out using the chains, freeze it in the cool room, and “cut it up” when it is frozen. Roley silently vows not to do this. He recalls Declan’s irritatingly chipper spiels about Samson during the popular dolphin show, in which Declan boasted about the “special bond” between dolphins and humans. This contrasts with Declan’s cruel attitude towards the dead dolphin.

Remembering the moments when Samson’s “calm, loving eye” was “fixed on him alone,” Roley speculates that the reason visitors loved Samson so much was that “he was the only creature at the aquarium who seemed to be able to create a facial expression.” In contrast, he thinks of the blank expressions of the other creatures at the marine park: the fish, the sea-turtles, and the blind sea-lion. He recalls a conversation with his co-worker, Kaz, about the fact that goldfish have no-short term memory: “You put one in a fishbowl, and they start swimming around in circles, and every time it's like: Look, a little plastic shipwreck! Five seconds later: Look, a little plastic shipwreck!” There is an implicit connection between these thoughts and Roley’s sense that his wife’s brain is now a very different thing than what it once was.

Roley’s co-worker Kaz comes to help him wheel the body to the cool room, and together they think fondly on a particular dolphin show during the school holidays. Roley was supposed to reach for a fish from the bucket, cueing Samson to jump just as Declan gestured. He deliberately missed his cue, ruining the moment. He reflects that this was the only day of work at Oceanworld that he’d actually enjoyed, despite almost getting fired.

Roley wonders where else he could find a job that would let him off at 3 in the afternoon each day, and he thinks back to a time when he worked well-paid night shifts at the munitions plant. He’d had to quit this job after Liz’s rehab therapist said that it made her anxious waking up to find him gone. Following this train of thought, Roley finally recalls the moment of Liz’s accident at a friend’s party. Liz had been taking around a platter on the unfinished deck when she’d turned to answer a question, tripped, and fell off. The fall was only a metre and a half, but she’d hit her head on a rock below. Roley recalls the shocked moment of the accident, the arrival of the ambulance, and seeing his “lovely, witty wife” in a plastic body brace. He observes his ongoing failure to comprehend this moment: he has to “re-learn” it each time he remembers it.

At this moment Declan walks into the cool room and orders Roley again to freeze Samson’s body and cut it up. With his hand affectionately on Samson’s flank, Roley refuses. Declan fires him on the spot. As he walks out of Oceanworld, Roley steals several plastic trinkets from the gift-shop, including a snowdome. When he arrives home, he presents the snowdome to his wife. Instead of shaking it she holds it passively. Grimly, Roley thinks that they should put tiny brains inside the snowdome instead, “something to knock around uselessly” while “some big hand somewhere just kept on shaking.” 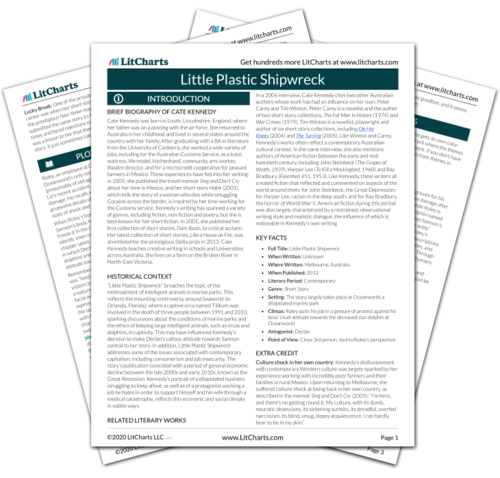 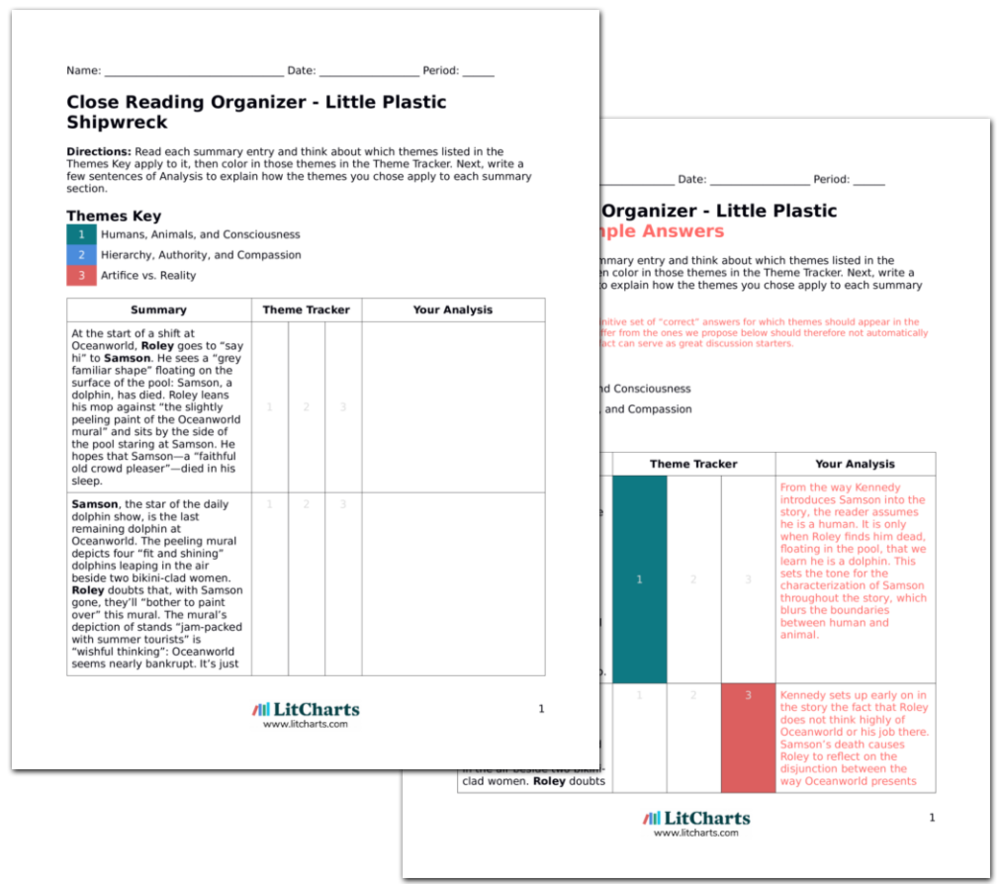