Download this LitChart! (PDF)
Teachers and parents! Struggling with distance learning? Our Teacher Edition on Meditations can help.

Welcome to the LitCharts study guide on Marcus Aurelius's Meditations. Created by the original team behind SparkNotes, LitCharts are the world's best literature guides.

A concise biography of Marcus Aurelius plus historical and literary context for Meditations.

A quick-reference summary: Meditations on a single page.

In-depth summary and analysis of every book of Meditations. Visual theme-tracking, too.

Explanations of Meditations's symbols, and tracking of where they appear.

An interactive data visualization of Meditations's plot and themes.

Marcus Aurelius was Emperor of the Roman Empire for almost two decades, from 161–180 C.E. He was born Marcus Annius Verus and brought up by his grandfather, a Roman consul (Marcus’s father having died when he was young). He came from a fairly distinguished family and enjoyed a well-educated, upper-class youth that would have included study of classical literature in both Latin and Greek, as well as rhetoric and philosophy. He did not regard himself as a philosopher, but simply as a student of philosophy—a subject that became increasingly important to him later in life. In 137, the childless emperor Hadrian selected the senator Antoninus Pius as his successor, who in turn designated his nephew and adoptive son, Marcus, as his own successor. At this point, Marcus added the family name of Aurelius Antoninus to his own. In 161, Antoninus’s death made Marcus Emperor; Marcus then made his adoptive brother, Lucius Verus, his co-regent. His entire reign was troubled: early on, the Empire was devastated by a plague brought back by soldiers fighting against the Parthians (an empire in what’s now Iran), followed soon after by the invasion of Germanic peoples from the north. In 168, Marcus himself marched with the armies to fight in what were known as the Marcomannic Wars on the Empire’s northern frontiers. Meditations was written during this last decade of his life, during a period marked by upheaval on the borders, revolt within, and the deaths of loved ones. Marcus was married to a woman named Faustina and had at least 13 children with her. He was succeeded by his son, Commodus, whose reign was both more peaceful and far more scandalous than his father’s.
Get the entire Meditations LitChart as a printable PDF.
"My students can't get enough of your charts and their results have gone through the roof." -Graham S.
Download 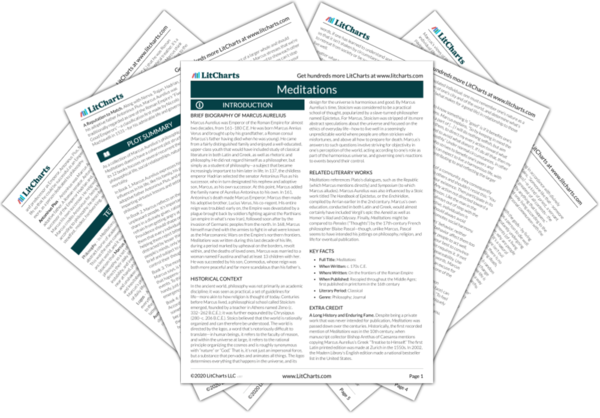 In the ancient world, philosophy was not primarily an academic discipline; it was seen as practical, a set of guidelines for life—more akin to how religion is thought of today. Centuries before Marcus lived, a philosophical school called Stoicism emerged, founded by a teacher in Athens named Zeno (c. 332–262 B.C.E.); it was further expounded by Chrysippus (280–c. 206 B.C.E.). Stoics believed that the world is rationally organized and can therefore be understood. The world is directed by the logos, a word that’s notoriously difficult to translate—in human beings, it refers to the faculty of reason, and within the universe at large, it refers to the rational principle organizing the cosmos and is roughly synonymous with “nature” or “God.” That is, it’s not just an impersonal force, but a substance that pervades and animates all things. The logos determines everything that happens in the universe, and its design for the universe is harmonious and good. By Marcus Aurelius’s time, Stoicism was considered to be a practical school of thought, popularized by a slave-turned-philosopher named Epictetus. For Marcus, Stoicism was stripped of its more abstract speculations about the universe and focused on the ethics of everyday life—how to live well in a seemingly unpredictable world where people are often stricken with misfortunes, and above all how to prepare for death. Marcus’s answers to such questions involve striving for objectivity in one’s perception of the world, acting according to one’s role as part of the harmonious universe, and governing one’s reactions to events beyond their control.

Other Books Related to Meditations

Meditations references Plato’s dialogues, such as The Republic (which Marcus mentions directly) and The Symposium (to which Marcus alludes). Marcus Aurelius was also influenced by a Stoic work titled The Handbook of Epictetus, or the Enchiridion, compiled by Arrian earlier in the 2nd century. Marcus’s own education, conducted in both Latin and Greek, would almost certainly have included Vergil’s epic The Aeneid as well as Homer’s epic poems The Iliad and The Odyssey. Finally, Meditations might be compared to Pensées (“Thoughts”) by the 17th-century French philosopher Blaise Pascal—though, unlike Marcus, Pascal seems to have intended his jottings on philosophy, religion, and life for eventual publication.
Key Facts about Meditations

A Long History and Enduring Fame. Despite being a private work that was never intended for publication, Meditations was passed down over the centuries. Historically, the first recorded mention of Meditations was in the 10th century, when manuscript collector Bishop Arethas of Caesarea mentions copying Marcus Aurelius’s Greek “Treatise to Himself.” The first Latin printed edition was made at Zurich in the 1550s. In 2002, the Modern Library’s English edition made a national bestseller list in the United States.

A Reputation to Match. Along with Nerva, Trajan, Hadrian, and his adoptive father Antoninus Pius, Marcus Aurelius was traditionally regarded as one of the Roman Empire’s “Five Good Emperors”—a classification first made by Niccolò Machiavelli in 1531—for his admirable life and governance. 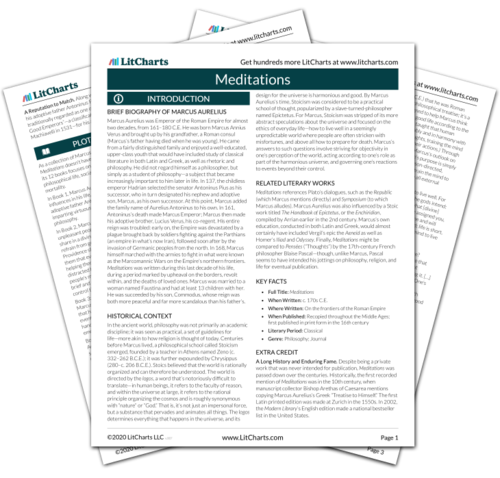 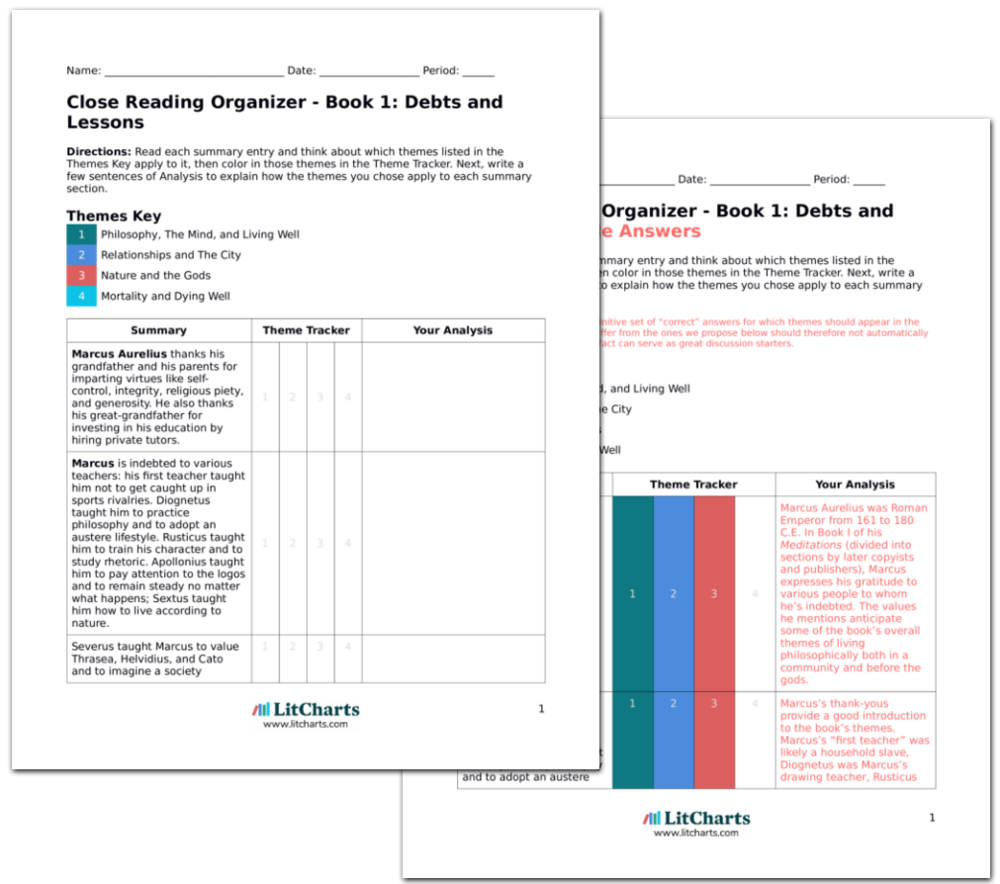