Download this LitChart! (PDF)
Teachers and parents! Struggling with distance learning? Our Teacher Edition on Meditations on First Philosophy can help.

Welcome to the LitCharts study guide on René Descartes's Meditations on First Philosophy. Created by the original team behind SparkNotes, LitCharts are the world's best literature guides.

A concise biography of René Descartes plus historical and literary context for Meditations on First Philosophy.

A quick-reference summary: Meditations on First Philosophy on a single page.

In-depth summary and analysis of every chapter of Meditations on First Philosophy. Visual theme-tracking, too.

Explanations, analysis, and visualizations of Meditations on First Philosophy's themes.

Description, analysis, and timelines for Meditations on First Philosophy's characters.

Description, analysis, and timelines for Meditations on First Philosophy's terms.

Explanations of Meditations on First Philosophy's symbols, and tracking of where they appear.

An interactive data visualization of Meditations on First Philosophy's plot and themes.

René Descartes (pronounced day-cart) is generally considered the most significant French philosopher of the 1600s and the father of modern philosophy, above all because of the method he develops in Meditations. He was born to a prominent Catholic family in the Touraine Province of Western France and received a comprehensive Jesuit education, finished a degree in law, and briefly joined the Dutch army. One night in November 1619, during his military service, he fell asleep by a stove, had a series of vivid dreams, and decided to dedicate the rest of his life to science. This episode also directly inspired his Meditations. From 1620 to 1628, Descartes traveled around Europe, studied philosophy and geometry, and befriended a number of prominent intellectuals in Paris. In 1628, he abruptly moved to the Netherlands, a Protestant region where the Catholic Church’s Inquisition could not prosecute him for challenging religious doctrine. He studied in a number of Dutch cities, including Franeker, Leiden, Amsterdam, and Deventer, and he moved nearly every year for the rest of his life. Descartes had a relationship with a servant that resulted in a daughter, but she died at a young age, which devastated him. He composed all of his major works in the last 20 years of his life, writing in Latin (for fellow scholars) as well as, unusually, in French (for the general public). Today, he is best remembered for the first two chapters of Meditations, which influenced virtually all the philosophers that followed him in their insistence that rational inquiry should be the foundation for science. He also revolutionized the study of mathematics—and especially geometry—by inventing the Cartesian coordinates system. And he made significant contributions to theology based on his optimistic (and controversial) worldview that Catholics and Protestants alike could achieve salvation and go to heaven. Due to the controversial nature of his work during his lifetime, he was occasionally run out of various cities. In 1648, Descartes finally returned to France to publish some of his work, and in 1649, Queen Christina of Sweden invited him to her court to teach her philosophy. However, he caught pneumonia in the frigid Swedish winter and died early the next year—although scholars recently suspected that he may have actually been poisoned.
Get the entire Meditations on First Philosophy LitChart as a printable PDF.
"My students can't get enough of your charts and their results have gone through the roof." -Graham S.
Download 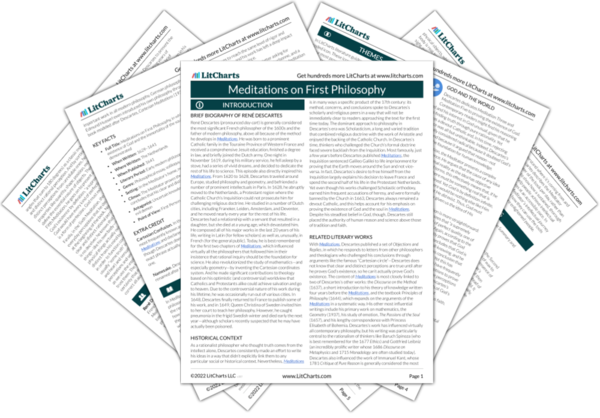 As a rationalist philosopher who thought truth comes from the intellect alone, Descartes consistently made an effort to write his ideas in a way that didn’t explicitly link them to any particular social or historical context. Nevertheless, Meditations is in many ways a specific product of the 17th century: its method, concerns, and conclusions spoke to Descartes’s scholarly and religious peers in a way that will not be immediately clear to readers approaching the text for the first time today. The dominant approach to philosophy in Descartes’s era was Scholasticism, a long and varied tradition that combined religious doctrine with the work of Aristotle and enjoyed the backing of the Catholic Church. In Descartes’s time, thinkers who challenged the Church’s formal doctrine faced severe backlash from the Inquisition. Most famously, just a few years before Descartes published Meditations, the Inquisition sentenced Galileo Galilei to life imprisonment for proving that the Earth moves around the Sun and not vice-versa. In fact, Descartes’s desire to free himself from the Inquisition largely explains his decision to leave France and spend the second half of his life in the Protestant Netherlands. Yet even though his works challenged Scholastic orthodoxy, earned him frequent accusations of heresy, and were formally banned by the Church in 1663, Descartes always remained a devout Catholic, and this helps account for his emphasis on proving the existence of God and the soul in Meditations. Despite his steadfast belief in God, though, Descartes still placed the authority of human reason and science above those of tradition and faith.

Other Books Related to Meditations on First Philosophy

With Meditations, Descartes published a set of Objections and Replies, in which he responds to letters from other philosophers and theologians who challenged his conclusions through arguments like the famous “Cartesian circle”—Descartes does not know that clear and distinct perceptions are true until after he proves God’s existence, so he can’t actually prove God’s existence. The content of Meditations is most closely linked to two of Descartes’s other works: the Discourse on the Method (1637), a short introduction to his theory of knowledge written four years before the Meditations, and the textbook Principles of Philosophy (1644), which expands on the arguments of the Meditations in a systematic way. His other most influential writings include his primary work on mathematics, the Geometry (1937), his study of emotion, The Passions of the Soul (1657), and his lengthy correspondence with Princess Elisabeth of Bohemia. Descartes’s work has influenced virtually all contemporary philosophy, but his writing was particularly central to the rationalism of thinkers like Baruch Spinoza (who is best remembered for the 1677 Ethics) and Gottfried Leibniz (an incredibly prolific writer whose 1686 Discourse on Metaphysics and 1715 Monadology are often studied today). Descartes also influenced the work of Immanuel Kant, whose 1781 Critique of Pure Reason is generally considered the most important work in all modern philosophy. German philosopher Edmund Husserl even introduced his own philosophy through a book modeled after Descartes, Cartesian Meditations (1931).
Key Facts about Meditations on First Philosophy

Cartesian Confusion. In the popular imagination, Descartes is most frequently known as the philosopher who wrote Meditations and declared that “I think, therefore I am.” But even though Descartes does make this argument in Meditations, this exact phrase actually appears in one of his other books, not this one.

Namesake. Descartes’s hometown, La Haye en Touraine, was renamed after him in 1802. 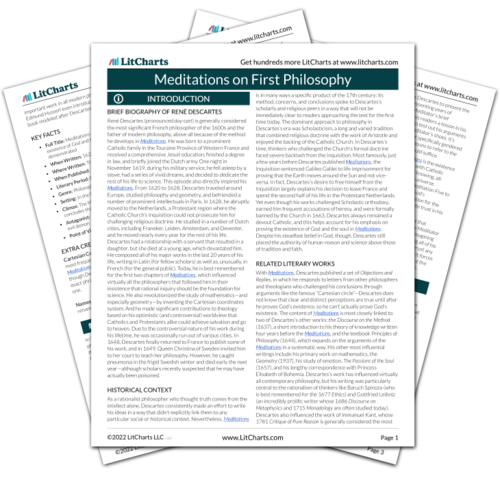 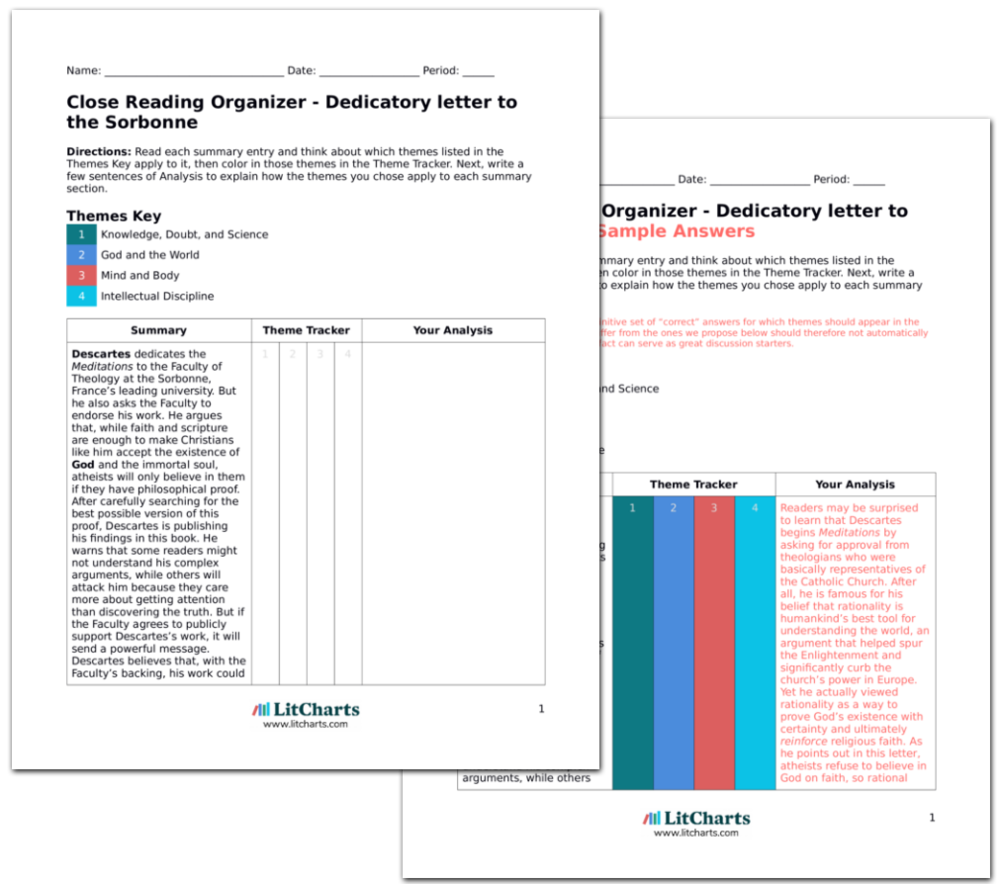