Download this LitChart! (PDF)
Teachers and parents! Struggling with distance learning? Our Teacher Edition on Messenger can help.

Welcome to the LitCharts study guide on Lois Lowry's Messenger. Created by the original team behind SparkNotes, LitCharts are the world's best literature guides.

A concise biography of Lois Lowry plus historical and literary context for Messenger.

A quick-reference summary: Messenger on a single page.

In-depth summary and analysis of every chapter of Messenger. Visual theme-tracking, too.

Explanations of Messenger's symbols, and tracking of where they appear.

An interactive data visualization of Messenger's plot and themes.

Lowry is the oldest of two children. When she was born, her parents initially gave her a Norwegian name (her father was of Norwegian descent), but when her paternal grandmother objected, they named her Lois. Her father was an Army dentist, so her family moved often around the United States and the globe. She attended junior high school in Japan, but graduated from high school in New York City. Lowry enrolled at Pembroke College in Brown University (the associated women's college of Brown; now part of the university itself), but only completed two years. She dropped out when she married her husband, and the two had four children. They settled in Maine after her husband ended his military career and there, Lowry completed her bachelor’s degree at the University of Southern Maine. A lifelong writer, she worked as a freelance journalist and photographer and in 1977 published her first novel, A Summer to Die. At this point, she and her husband decided to divorce. Lowry has written a number of children's novels since then. The Giver and Number the Stars have won Newbery awards, and The Giver has been one of the most challenged books in American schools. She splits her time between homes in Massachusetts and Maine.
Get the entire Messenger LitChart as a printable PDF.
"My students can't get enough of your charts and their results have gone through the roof." -Graham S.
Download 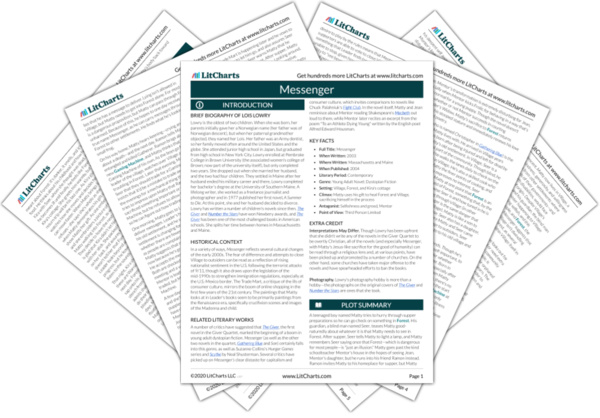 In a variety of ways, Messenger reflects several cultural changes of the early 2000s. The fear of difference and attempts to close Village to outsiders can be read as a reflection of rising nationalist sentiment in the U.S. following the terrorist attacks of 9/11, though it also draws upon the legislation of the mid-1990s to strengthen immigration regulations, especially at the U.S.-Mexico border. The Trade Mart, a critique of the ills of consumer culture, mirrors the boom of online shopping in the first few years of the 21st century. The paintings that Matty looks at in Leader's books seem to be primarily paintings from the Renaissance era, specifically crucifixion scenes and images of the Madonna and child.

Other Books Related to Messenger

A number of critics have suggested that The Giver, the first novel in the Giver Quartet, marked the beginning of a boom in young adult dystopian fiction. Messenger (as well as the other two novels in the quartet, Gathering Blue and Son) certainly falls into this genre, as well as Suzanne Collins's Hunger Games series and Scythe by Neal Shusterman. Several critics have picked up on Messenger's clear distaste for capitalism and consumer culture, which invites comparisons to novels like Chuck Palahniuk's Fight Club. In the novel itself, Matty and Jean reminisce about Mentor reading Shakespeare’s Macbeth out loud to them, while Mentor later recites an excerpt from the poem "To an Athlete Dying Young" written by the English poet Alfred Edward Housman.
Key Facts about Messenger

Interpretations May Differ. Though Lowry has been upfront that she didn't write any of the novels in the Giver Quartet to be overtly Christian, all of the novels (and especially Messenger, with Matty's Jesus-like sacrifice for the good of humanity) can be read through a religious lens and, at various points, have been picked up and promoted by a number of churches. On the other hand, some churches have taken major offense to the novels and have spearheaded efforts to ban the books.

Photography. Lowry's photography hobby is more than a hobby—the photographs on the original covers of The Giver and Number the Stars are ones that she took. 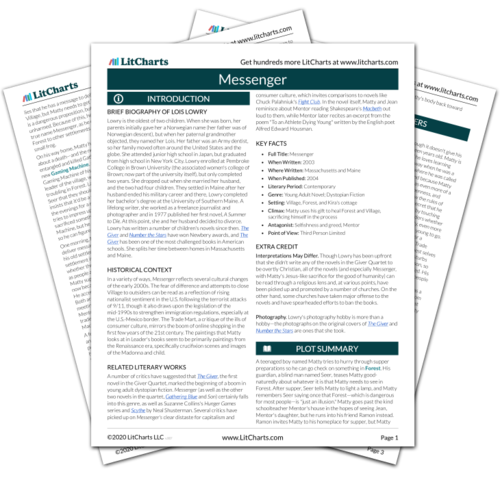 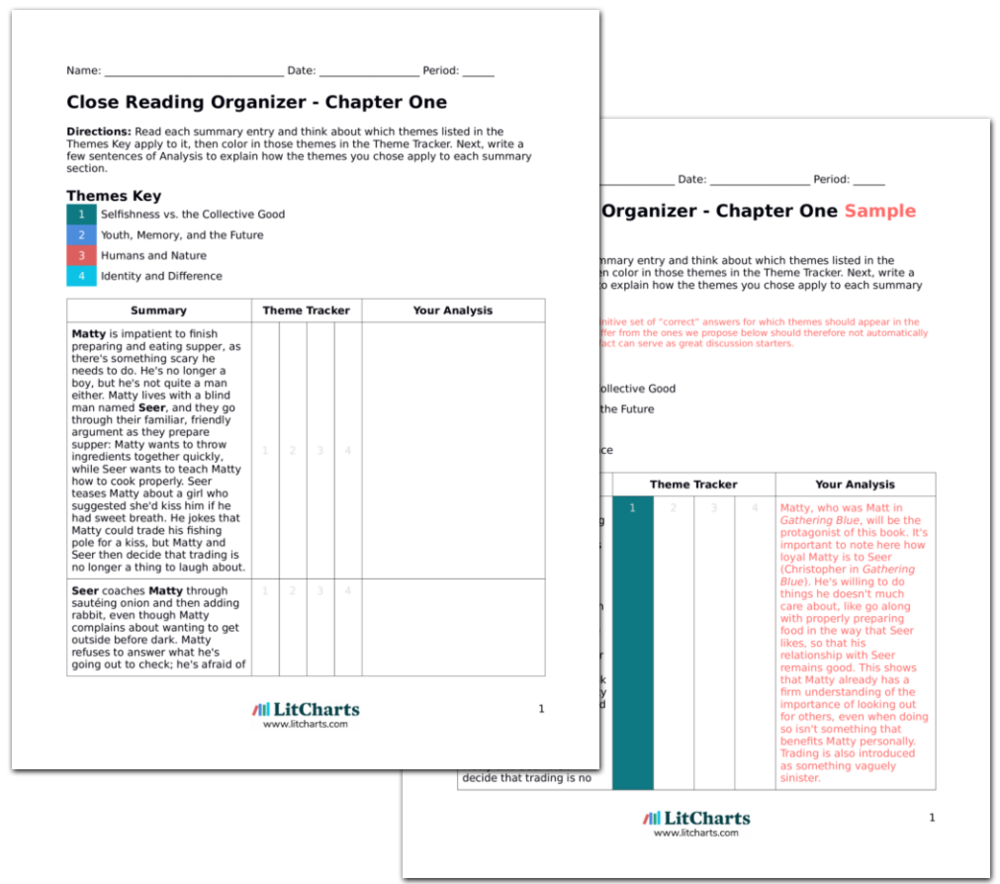